Three LSU AgCenter researchers have been awarded $62,500 in grant funding that will help them promote their inventions to industry partners. The grants are from the Leverage Innovation for Technology Transfer, or LIFT2, Fund, which began in 2014 to stimulate technology transfer between LSU and the marketplace. 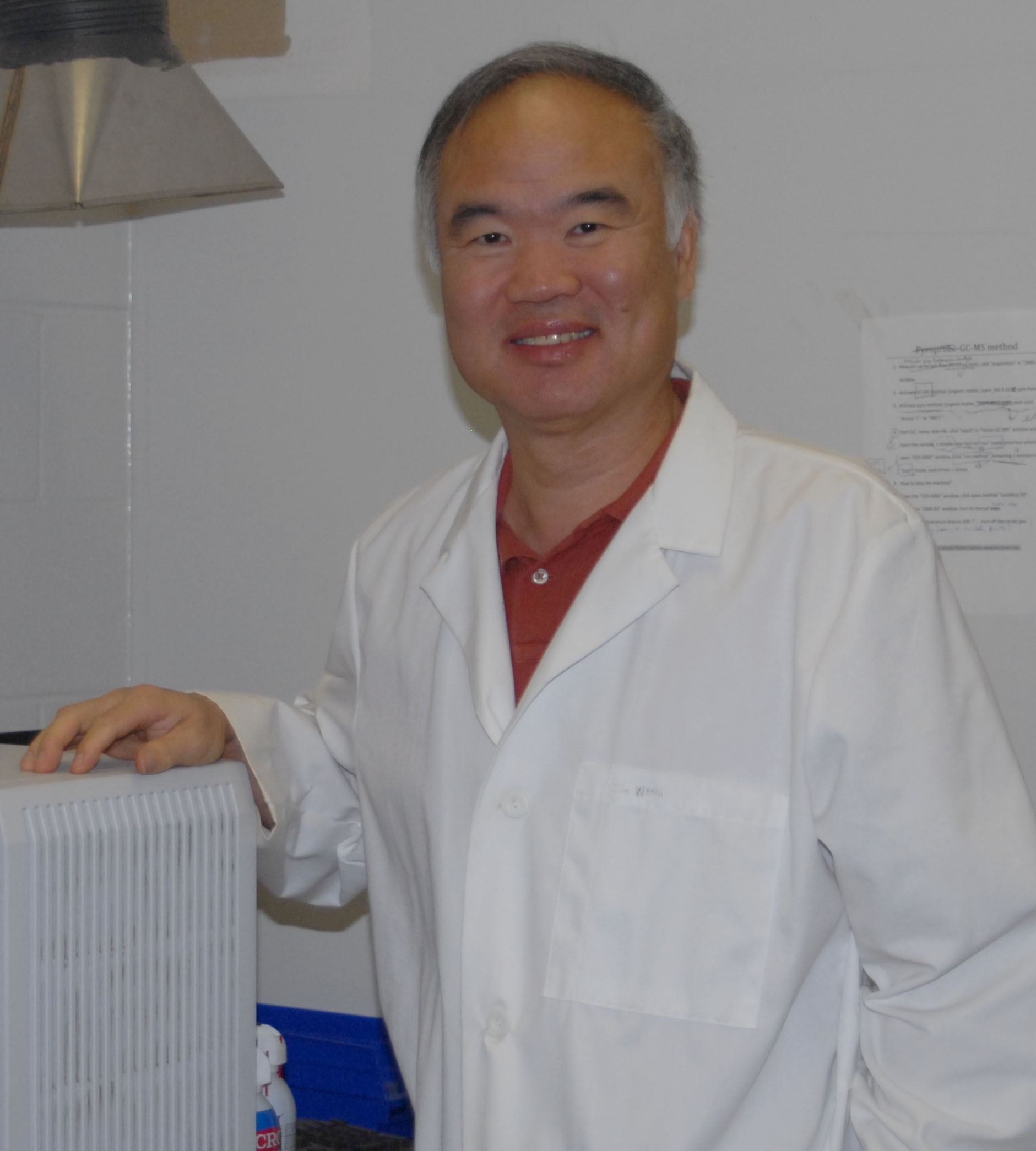 Jim Wang, a soil chemist in the AgCenter School of Plant, Environmental and Soil Sciences, has developed a low-cost, efficient magnetic magnesium oxide-impregnated biochar composite for capturing and removing phosphate from surface water and wastewater. The product has applications in removing phosphates from municipal wastewater, from surface water in agricultural fields and from animal-waste lagoons. The $27,500 grant will help him develop an elastomeric foam product that could be impregnated with the biochar and used to filter agricultural runoff to remove phosphates. The biochar also could be used as a “bedding” material in a wastewater treatment facility to capture phosphates.

Greg Lutz and Wei Xu, researchers at the AgCenter Aquaculture Research Station, are using a 12-month, $35,000 grant to refine commercial probiotics for fish aquaculture, which will encourage fast growth and enhance immune responses. The researchers hope to enhance the bacteria in the fish gut with natural probiotic compounds to improve the balance of bacteria. They are concentrating on naturally occurring, plant-based oligosaccharides to find the compound or combination of compounds that will improve fish production at low cost. They are working with tilapia as a model fish, but the results could be applied to farming any finfish.

LSU AgCenter food scientist Ashley Gutierrez, second from left, takes notes as Harrison Decker, far left, manager of the Walk-On’s Bistreaux and Bar in Denham Springs, Louisiana, places ingredients on a scale in the restaurant’s kitchen. Walk-On’s has enlisted the help of the AgCenter Food Incubator to conduct nutrition analyses of its dishes. Federal regulations that will take effect in May 2018 require restaurants with more than 20 locations to publish calorie counts for every item on their menus, plus have additional nutrition information available if customers request it. Walk-On’s, a Louisiana company that operates or is planning to open locations in six states, falls into that category. 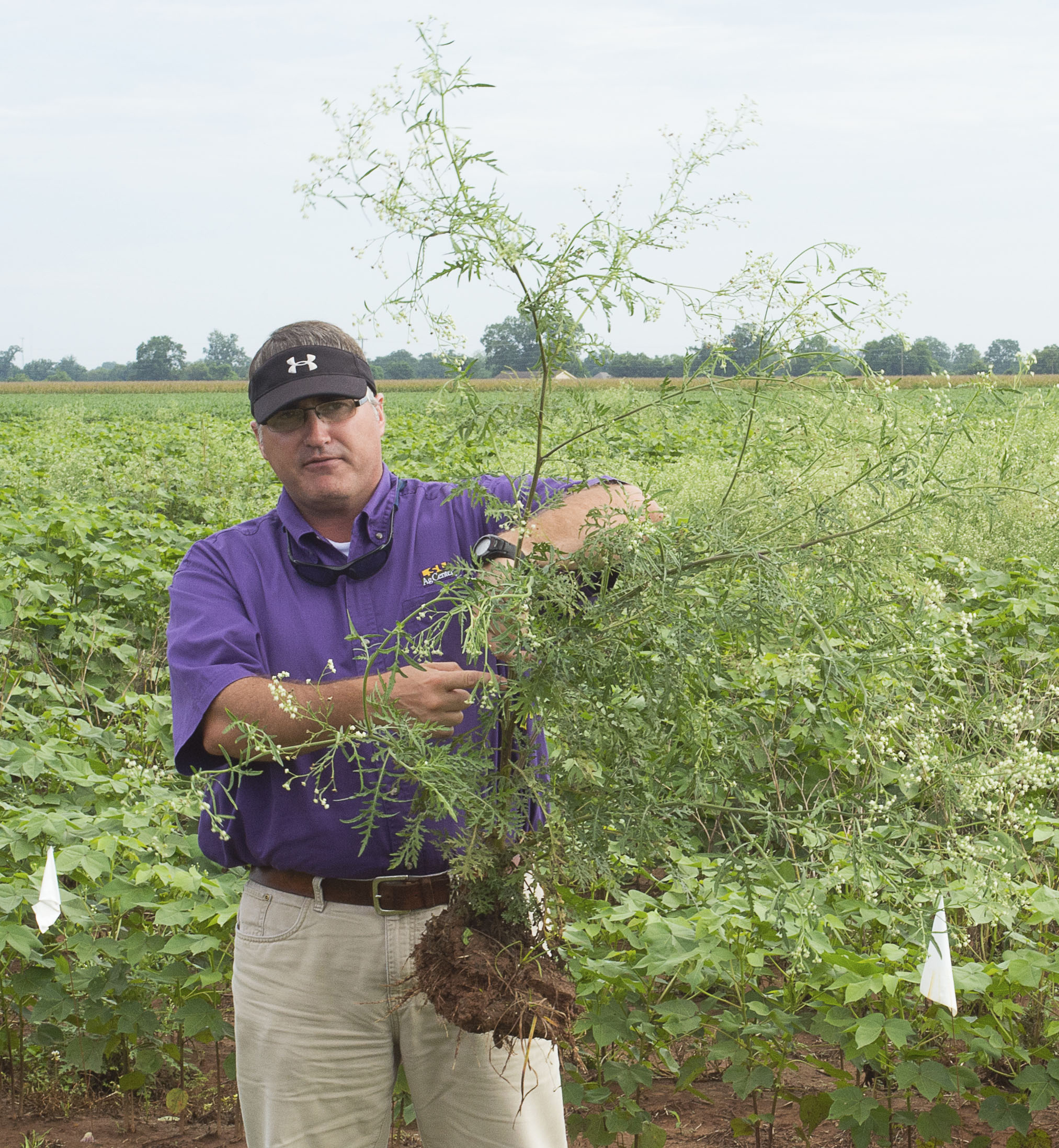 Daniel Stephenson, LSU AgCenter weed scientist, warned farmers about ragweed infestations in their fields during a field day on July 13 at the Dean Lee Research and Extension Center. Ragweed parthenium, also known as false ragweed, has gone from a nuisance in pastures to a major pest in Louisiana row crops. The weed can become a major problem quickly if it is not controlled early, Stephenson said. Ragweed parthenium often germinates after spring burndown herbicide applications and is not discovered until after crops have emerged. “If a producer sees it in their field, they need to remove it,” he said.

Seven new plants were named to the LSU AgCenter Plants with Potential program in 2017, including the turnera above. The LSU AgCenter Hammond Research Station inaugurated this program two years ago to introduce unfamiliar, nonpatented plant material to nurseries and landscape professionals, as well as industry partners and Master Gardener groups.

“Plant species or varieties selected for the program currently have limited or no distribution or use in the state, but evidence suggests they have excellent landscape performance potential in our challenging climate,” said horticulturist Jason Stagg.

Using nonpatented plant material free from propagation restrictions can present a significant cost savings and lower the cost of offering these new selections, he said.

The tunera, commonly called buttercup, is an annual that begins flowering mid to late spring and will reliably flower through fall until first frost. The flower, a good pollinator, reaches 18-24 inches tall by fall and grows well in full sun to partial shade.

For a complete list of the 22 plants, go to Plants with Potential.

The LSU AgCenter sugarcane research program is aggressive about finding varieties resistant to mosaic disease, said AgCenter plant breeder Collins Kimbeng during the annual field day on July 19 at the Sugar Research Station in St. Gabriel, Louisiana. The researchers have identified three clones resistant to mosaic, leaf scale and smut that will be used as parents in the crossing program, he said. A portion of the research is supported by grower funding from the American Sugar Cane League.

Jim Simon, general manager of the American Sugar Cane League, spoke about the renegotiated Mexican suspension agreement related to antidumping and countervailing duties against Mexican sugar imports into the United States.“The trade agreement is only as good as the enforcement behind it,” he said.

Simon said the league funds about $1 million in research at the AgCenter Sugar Research Station and the Audubon Sugar Institute.

AgCenter entomologist Rodrigo Diaz talked about the Phragmites scale, which has damaged a considerable amount of marsh cane in Plaquemines Parish from Venice to the mouth of the Mississippi River. Because the insect may be a danger to Louisiana crops, Diaz is inoculating sugarcane, corn, rice and sweet sorghum plants to see if the scale reproduces and damages the plants. The scale, native to Asia, has natural enemies in three small parasitic wasps.

More than 400 people attended the LSU AgCenter H. Rouse Caffey Rice Research Station field day on June 28 to hear about the latest work being done to help rice farmers. The group included 54 chefs and staff members from restaurants in New Orleans and Baton Rouge, who learned about rice production and how rice is milled. They examine a tray of brown rice in the above photo at the station’s mill. During the field tour, Steve Linscombe, LSU AgCenter rice breeder and station director, said the new Provisia rice technology has taken five years to develop, with one line ready for release as a variety and three new lines in the works. The Provisia system will help farmers fight weedy rice that cannot be controlled by Clearfield technology. “Having a different mode of action is certainly going to allow us to go in to these fields with weedy rice,” he said.

Christopher Green, LSU AgCenter aquaculture researcher, is among a group of scientists evaluating how to improve the production of native aquarium fishes under a two-year, $150,000 U.S. Department of Agriculture grant through the Southern Region Aquaculture Center, which is headquartered in Stoneville, Mississippi. The other institutions that are part of the grant are the University of Florida and Virginia Tech.

The scientists are studying minnows and other similar-size fishes popular with aquarium owners to help fish farmers improve their production and discourage enthusiasts from capturing them in the wild and causing problems to the environment.

The production of ornamental fishes on nearly 300 U.S. farms was worth $41.5 million in 2013, according to the USDA Census of Aquaculture. Fish farms in the South are mostly in Florida for the aquarium fish trade.

“In our neck of the woods, farms in Louisiana and Arkansas produce mostly koi and goldfish for aquariums and ornamental ponds,” Green said. “Our focus is on native ornamentals,” he said. “While the ornamental trade is primarily with tropicals, there is a market for native fish, too.”

Green’s work is with golden topminnows, which were selected from a list of “pilot” species identified by farmers. 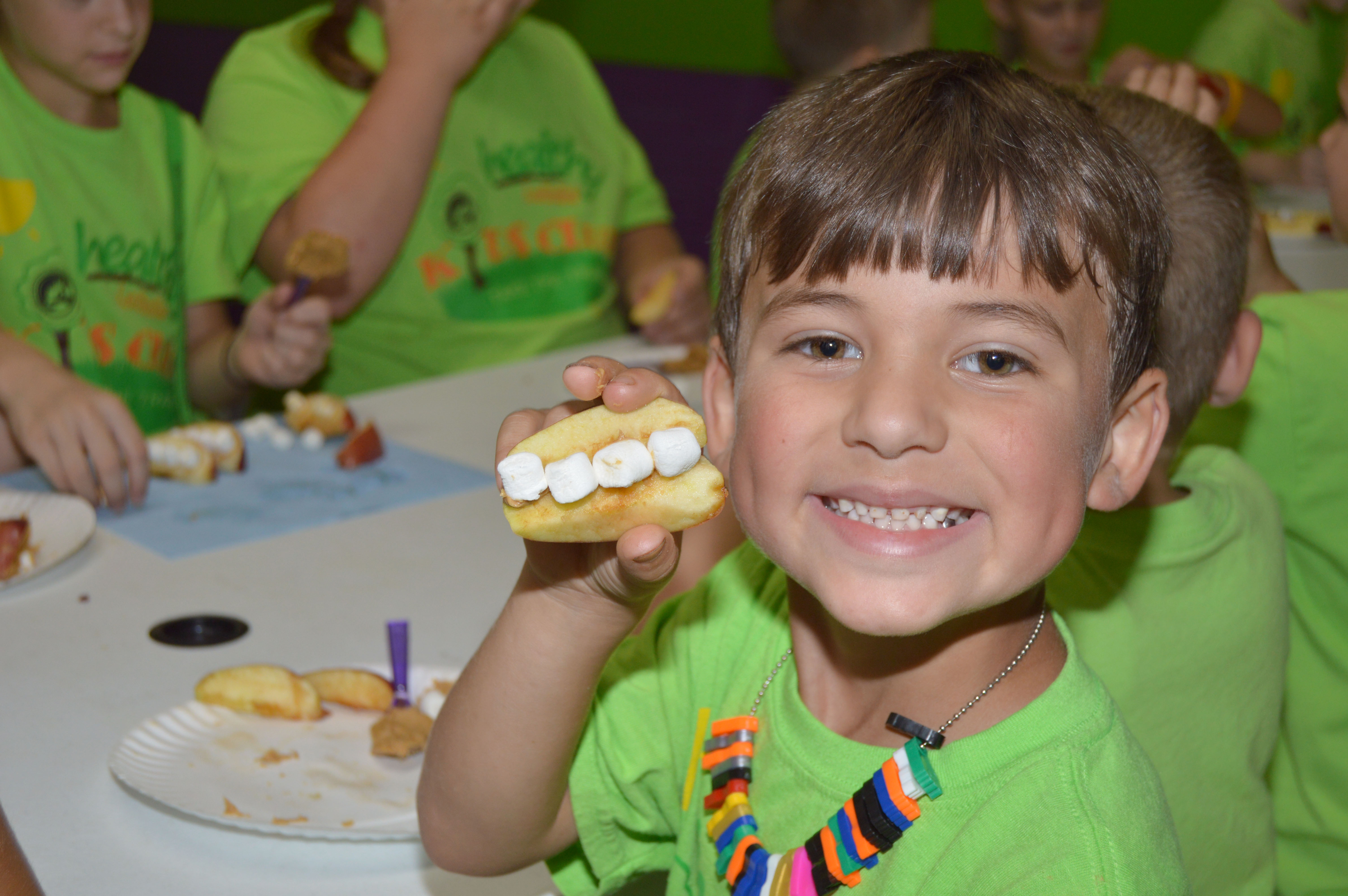 It was all part of the Healthy LaSalle! Summer Day Camp in the Park program. LSU AgCenter rural development agent Cynthia Cockerham helped organize the camp, which was part of the Healthy Places LaSalle initiative funded by a $600,000 grant from the Rapides Foundation.

Cockerham collaborated with parish leaders and elected officials to design the eight-session summer day camp, which ran through June and hosted nearly 200 youth ages 4 to 10.

All camp instructors were certified classroom teachers contracted through the LaSalle Parish School Board. “We planned the framework of the camp to include funding to pay instructors just as if they were teaching summer school,” Cockerham said.

Children ages 4 to 7 had a daily half-mile goal, while older youth walked a full mile, said Annie Steen, a LaSalle Junior High School physical education teacher who directed one of the camp sites.

“The camp encourages children and families to use the parks and get out and do things together instead of staying inside and playing video games all day,” Steen said.

The day camp is only a small part of the grant project. Cockerham said 75 percent of the funds have been invested in infrastructure. About $210,000 of the grant funding has provided park lighting at the Jena, Olla and Ward 10 parks, she said.

“The lighting will increase park usage and provide a safer environment for families who may not find time to get to park until later in the day,” she said, adding that another $70,000 has been used to purchase portable restroom trailers.