Arsenic is naturally found in the environment, and it is common to find traces of it in our food supply. It is known to cause human health problems if ingested at a high concentration, either through drinking arsenic-contaminated water or consumption of plants cultivated in arsenic-contaminated soils. The most toxic form to humans is the inorganic arsenic, and indeed it is the predominant form in soils. Trace amounts of inorganic arsenic are naturally found in soils; however, cropping practices such as irrigation of fields using contaminated water, use of arsenic-containing pesticides, and flooding have increased its concentrations and availability for plant uptake.

There are several reasons why rice contains relatively higher levels of arsenic compared to other cereal grains. First, rice is cultivated in flooded soils in which the availability of soil arsenic increases, resulting in increased uptake by rice. In upland soils, arsenic is bound to organic matter, clay particles and iron, aluminum and manganese hydroxides, making it less available for plant uptake. In flooded conditions, the depletion of oxygen results in release of arsenic into the soil solution, and with further transformation it will become highly soluble and mobile. Arsenic in this form is easily taken up by rice. Second, the transporters in the rice root system, which are responsible for absorption of nutrients, are not all selective. There are some root transporters identified as silicon transporters that also facilitate arsenic uptake in rice. Moreover, among the three silicon transporters recently found on rice nodes was the root transporter that also transports arsenic, which might be the pathway for its translocation inside the rice plant and eventually to grains.

Minimal flooding and farming rice in aerobic or a nonflooded condition are some of the cultural management practices known to reduce the amount of plant-available arsenic in soils. However, not only may rice grain yields decline when grown in these conditions, but the availability of cadmium, another metal toxic to humans, may increase. Because silicon fertilization has been associated with reduced insect and disease damage and high yields in crops even under stressful conditions, it has become an agronomic practice in many rice-producing regions in the world. Rice takes up large amounts of silicon from the soil, reaching levels much higher than nitrogen and phosphorus. Studies have shown that silicon can alleviate the toxicity caused by heavy metals including arsenic in rice. It seems that raising plant-available silicon in the soil is a logical approach to reducing intake of arsenic by rice.

A pot experiment was conducted in 2015 and 2016 to document the specific role of high levels of silicon in the soil and within the plant leading to reduced uptake of arsenic in flooded rice production systems in Louisiana. For this study the concentration of different arsenic species in the soil and arsenic in roots, straw and grains of rice grown with and without silicon fertilization were measured. Bulk soil samples were collected from a rice field in Evangeline Parish and processed before placing them in pots. The soil was treated with increasing arsenic rates (0, 10, 20, 40 and 120 parts per million) with or without application of silicon fertilizer. On average, arsenic worldwide is naturally found in the soil at 10 parts per million. Rice that received the highest rate of arsenic showed typical symptoms of arsenic toxicity: chlorosis (yellowing of leaves) and many unfilled grains (increased sterility) (Photo 1). At the heading stage and at harvest, soil and plant (including root) samples were collected (Photo 2). The concentration of arsenic species in the soil that were significantly reduced by silicon fertilization included the iron-bound and reducible arsenic (Figure 1). These two species are known to impact the form of arsenic that is taken up by rice. There were subsequent reductions in plant arsenic uptake. In 2016, the arsenic content of rice straw was reduced by 51 percent at the heading stage and 38 percent at harvest (Figure 2). In addition, the root arsenic content was reduced by 22 percent at the heading stage in 2016. In effect, the total arsenic content measured in the grain of rice fertilized with silicon was lower by 0.3 parts per million in 2015 and 0.2 parts per million in 2016 compared to rice without silicon fertilization.

The outcome of this research shows that raising plant-available silicon in the soil through silicon fertilization reduces the intake of arsenic by rice. Consuming 0.6 cup of cooked rice per day is comparable to drinking 1 liter per day of water with a total arsenic content of 10 parts per billion, which is the current U.S. maximum contaminant limit for water. Apart from the amount of arsenic intake, its toxicity in human is influenced by age and body weight as well. One of the parameters used to determine arsenic contamination in humans is the urinary total arsenic concentration. On average, adults, children and 1-year-old infants that regularly consume rice have 2.4, 0.009, and 0.006 parts per million of arsenic in their urine, respectively, which is nearly twice the concentration of those who do not consume rice-based products. To date, there are still no regulations in the United States for arsenic content limits in foods, except for animals treated with veterinary drugs (0.5 to 2 ppm).

In Louisiana, rice production is considered a core crop industry currently cultivated on about 500,000 acres annually, the third largest in the nation. Production of high-quality rice grains is essential to keep the industry competitive and to maintain food safety. As a staple food, even trace amounts of arsenic in rice grains may pose a health risk to humans, especially for those who consume large amounts of rice in their diet.

Flavia B. Agostinho is a Ph.D. candidate and Brenda S. Tubaña is an associate professor in the School of Plant, Environmental and Soil Sciences.

(This article appears in the spring 2017 issue of Louisiana Agriculture.) 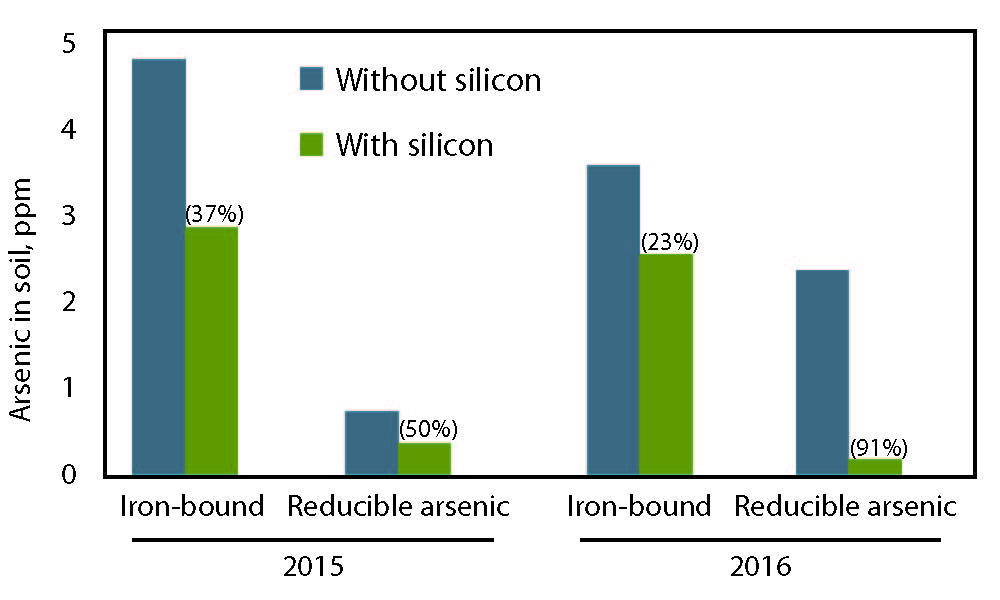 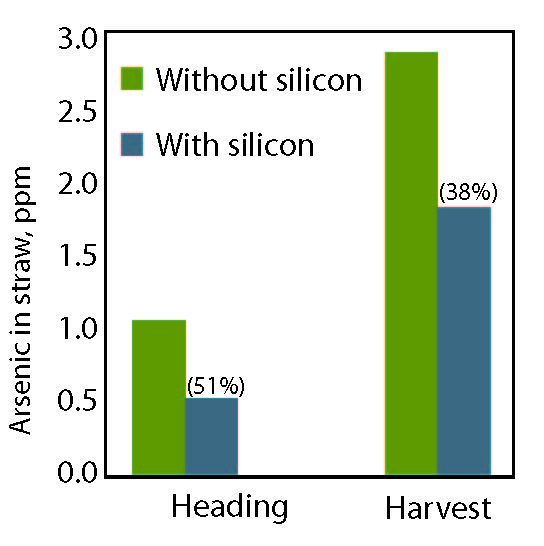