Southern corn rust, caused by the fungus Puccinia polysora, is a disease that affects the Louisiana corn crop annually, but at different incidences and severity. The total impact varies because of weather conditions, the presence of viable, wind-blown spores and the corn prices. Risk can be determined by a combination of factors investigated over a 12-year period from plots grown in strategic areas of Louisiana. The 12-year study has allowed Southern corn rust to be studied under various development levels.

Spores of P. polysora enter Louisiana annually in winds blowing from the Caribbean region, southern Florida and southern Mexico. These spores can survive the journey because of their hardiness, high pigment content and low sensitivity to UV light. With high survivability and potential infectivity, the inoculum poses a threat to all Louisiana-grown corn hybrids. The only resistance historically available in commercial hybrids came from the Rpp9 gene, which was available in only a few hybrids. That gene was overcome by the disease in 2010 in southwestern Georgia and is no longer available as a resistance tool against P. polysora. As a result, all commercially available hybrids grown in Louisiana have some level of susceptibility to the pathogen.

Southern corn rust development is dependent on several factors: conducive environment (temperature, leaf wetness, rainfall intensity), susceptible corn hybrids (most available hybrids have a Southern corn rust rating of 4-8 on a 0-9 rating scale, where 0 = no disease and 9 = fully rusted plant/plant desiccation) and virulent P. polysora spores. All three of these factors must occur at the same time for Southern corn rust to develop.

Southern corn rust development risk is greatest when temperatures remain consistently within the 77-degree to 104-degree range, leaf wetness is greater than four hours and, if raining, the rain intensity is light, with the duration less than three hours. Heavy rains with high winds tend to wash the spores out of the air and off the corn leaves. Spore germination and Southern corn rust development can occur in an air temperature of up to 104 degrees, but that is the upper limit. Leaf wetness encourages spore germination and eventual infection. Four hours is the minimum amount of time necessary for this to happen. Research has shown that increasing the hours of leaf wetness enhances the germination and subsequent infection rate. Leaf wetness refers to the free water that resides on the leaf surface. The sources of free water are rainfall, dew and overhead irrigation; the leaf wetness period (dew period) is influenced by relative humidity. High relative humidity lengthens the dew period.

Table 1 includes the risk factors for Southern corn rust development and spread that can be used to determine whether fungicides are needed. First, consider the temperature. If temperatures are consistently within the listed ranges of the first row of the table, then assign the associated point value in the Subtotal Points column. For example, 50-76 degrees would be assigned zero (0) points, while the 77- to 90-degree range would be assigned three (3) points and the 91- to 104-degree range would be assigned one (1) point. The same principle is used for the Leaf Wetness (Dew Period) and Storm Intensity factors. After determining the point values for each environmental category, simply add the points. If the total point value is less than 7, it will not pay to apply a Southern corn rust fungicide because some conditions for rust development are missing. If the total point value is 7 or above, then the crop could benefit from a Southern corn rust fungicide application.

Clayton A. Hollier is a professor in the Department of Plant Pathology and Crop Physiology. 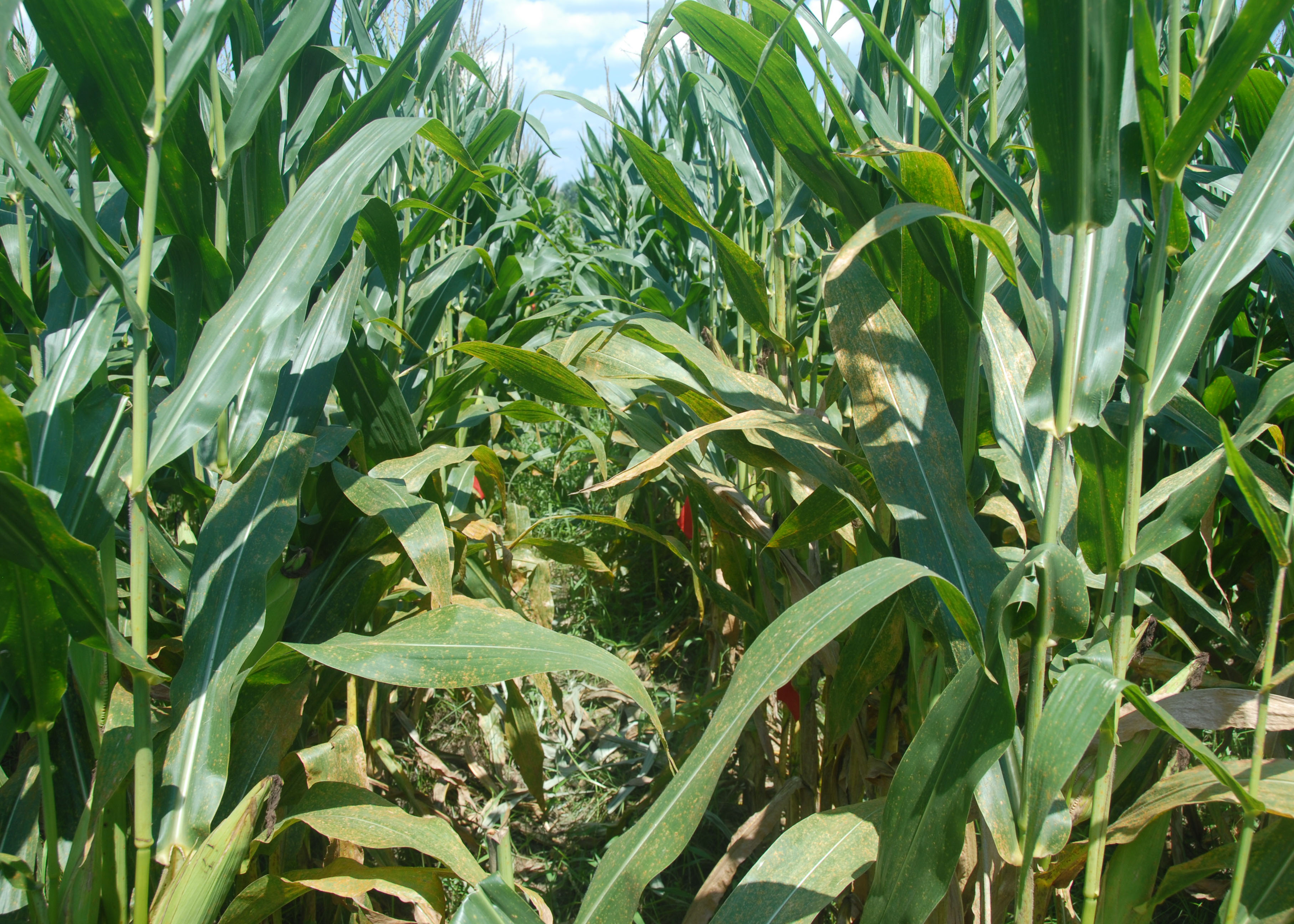 Southern corn rust management has been a guessing game for generations. Photo by Clayton Hollier