Crape myrtles are considered an essential Southern plant for good reasons. Selected from Lagerstroemia indica or its hybrid with L. fauriei, these summer-flowering trees offer spectacular flowers, colorful autumn foliage, and handsome sculptural trunks that few other plants can match. A new pest on crape myrtles, the crape myrtle bark scale was first detected in Texas in 2004 and quickly spread to 130 counties in 11 states by 2016. An article on its distribution, damage, life stage and population trends was published in the spring 2016 issue of Louisiana Agriculture.

Since then, new infestations have been reported from Covington and Mandeville, Louisiana. In addition, the crape myrtle bark scale has been confirmed on beautyberry in an open field and pomegranate, henna, heimia and winged loosestrife in greenhouse tests. This has raised concerns that this pest is capable of infesting native flora of the southeastern U.S.

When it comes to managing this scale, landscape professionals often prefer using neonicotinoids. This chemical class is systemic, which means the active ingredients get transferred into plant tissue and work whenever scales feed on the sap. They may be more effective or long-lasting than contact insecticides that work only when they have contact with the scale. However, because of concerns on the potential impact of neonicotinoids on beneficial insects and pollinators, they should be used as a last resort. Other control options include insect growth regulators, which mimic insect hormones and disrupt the molting process so the scale cannot move on from one life stage into the next one, or horticulture oil that works by suffocating crawlers or helping the insect growth regulators work better. There are other systemic insecticides such as cyantraniliprole, which may be low in toxicity to pollinators. All of these options need to be tested on the crape myrtle bark scale.

In a field study, LSU AgCenter researchers tested cyantraniliprole (as Mainspring 200SC) as a stand-alone treatment or in a tank mix with spray adjuvants (materials that help insecticides get into bark tissue) CapSil or Nufilm17. They also tested two insect growth regulators: pyriproxyfen (as Fulcrum) and azadiractin (as Molt-X) as stand-alone treatments or in tank mixes with horticulture oil SuffOil-X. Additional treatments included SuffOil-X as a stand-alone treatment, an untreated control and a neonicotinoid treatment (dinotefuran as Zylam 20SG). All treatments were applied as foliar and trunk spray to 80 Natchez White crape myrtles, based on crawler activity monitored weekly from untreated trees using double-sided sticky tapes (Figure 1).

Yan Chen is an associate professor, and Allen Owings is a professor, both at the Hammond Research Station in Hammond, Louisiana. 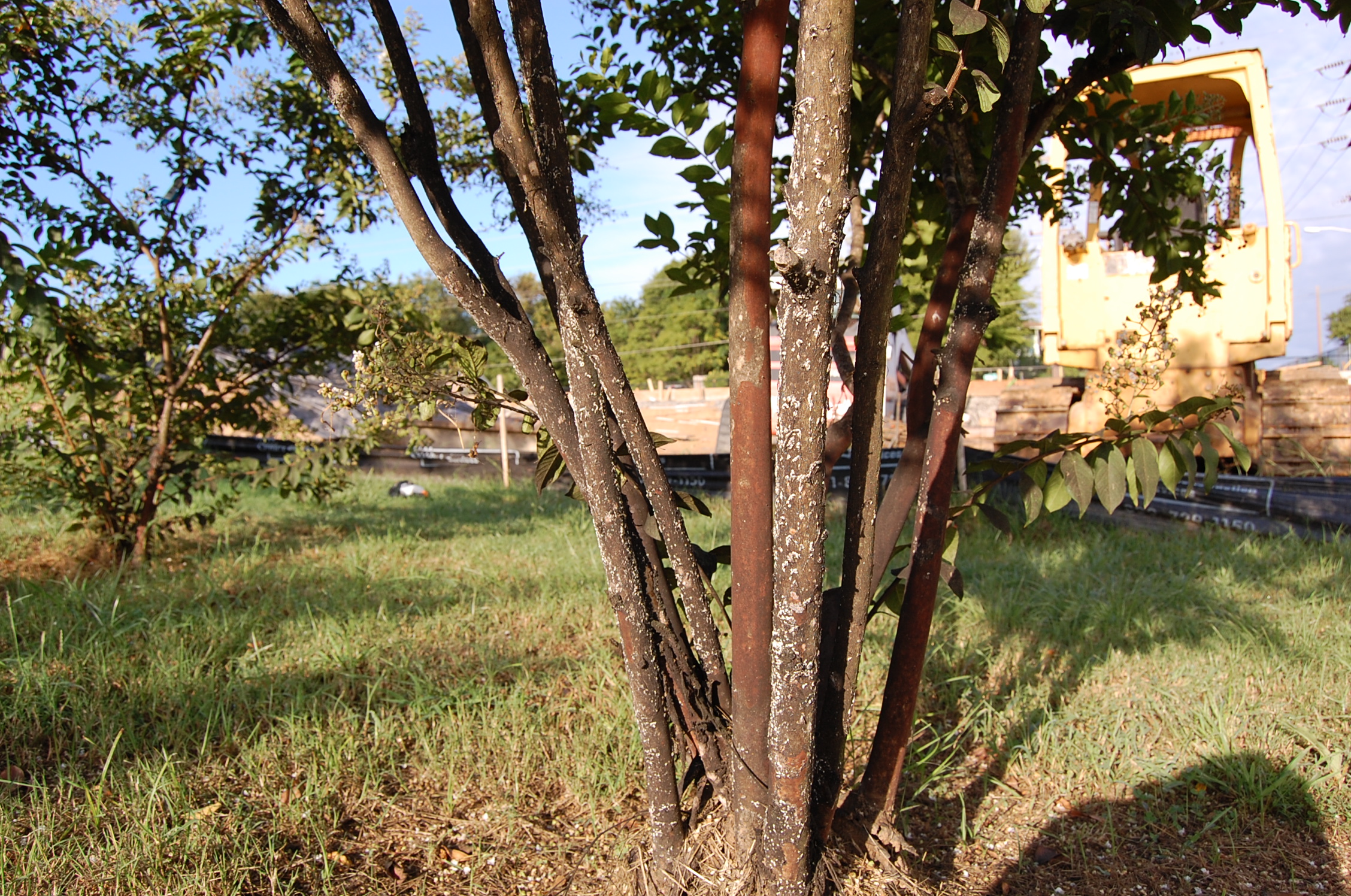 A Natchez White that was naturally infested with the crape myrtle bark scale and not treated with any insecticides shows sooty mold and white clusters of bark scale ovisac and gravid adults on its trunks. Photo by Yan Chen 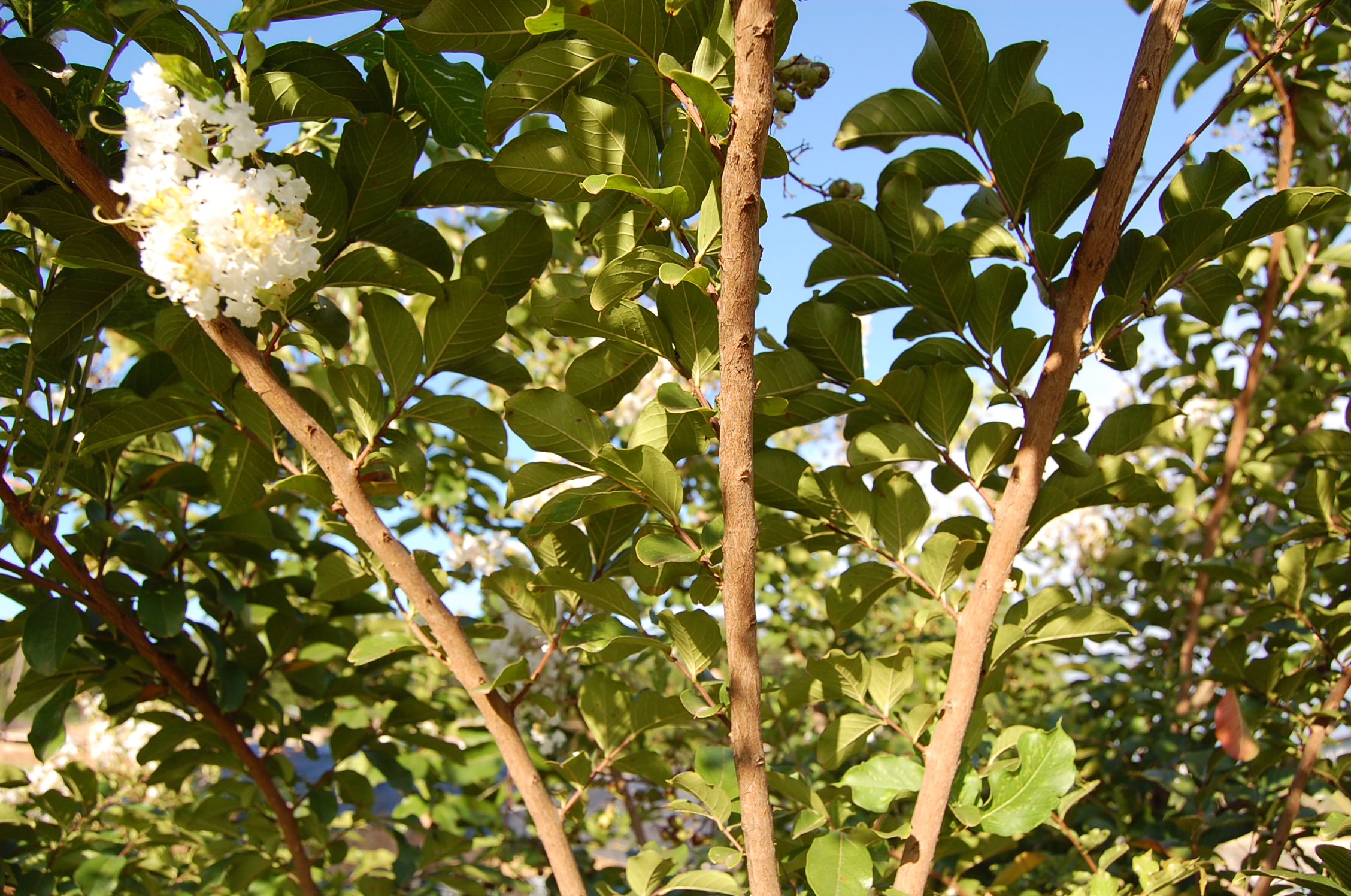 Close-up of branches of a Natchez White treated with Fulcrum. There were no signs of sooty mold. Photo by Yan Chen 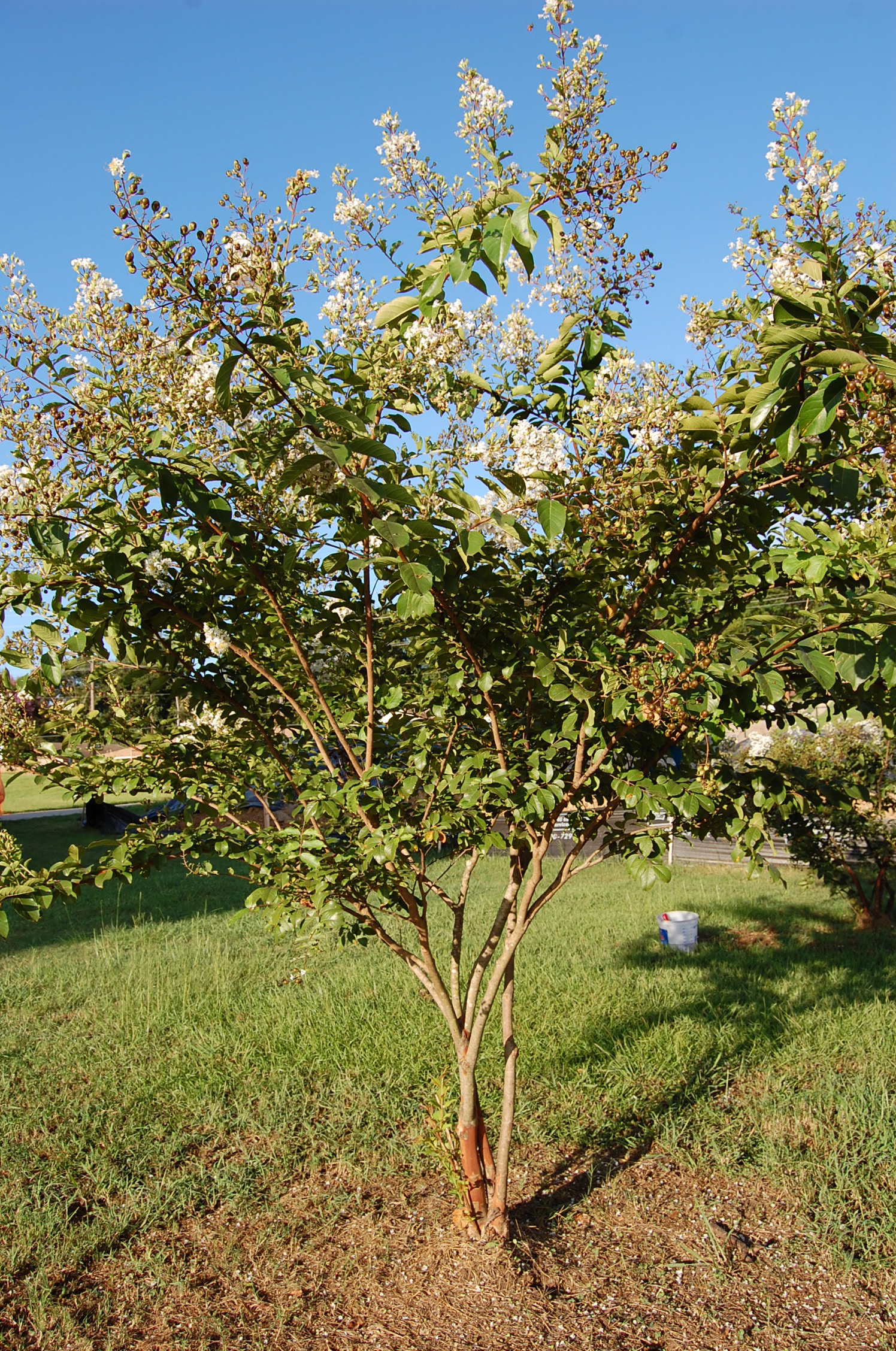 A Natchez White crape myrtle previously naturally infested with crape myrtle bark scale at a moderate degree (averages of 20 to 30 total numbers of the crape myrtle bark scale on a randomly selected 12-inch branches) was treated with pyriproxyfen (as Fulcrum) and free of signs of damage (such as sooty mold) at 120 days after the first application of three consecutive treatments 10 to 15 days apart. Photo by Yan Chen 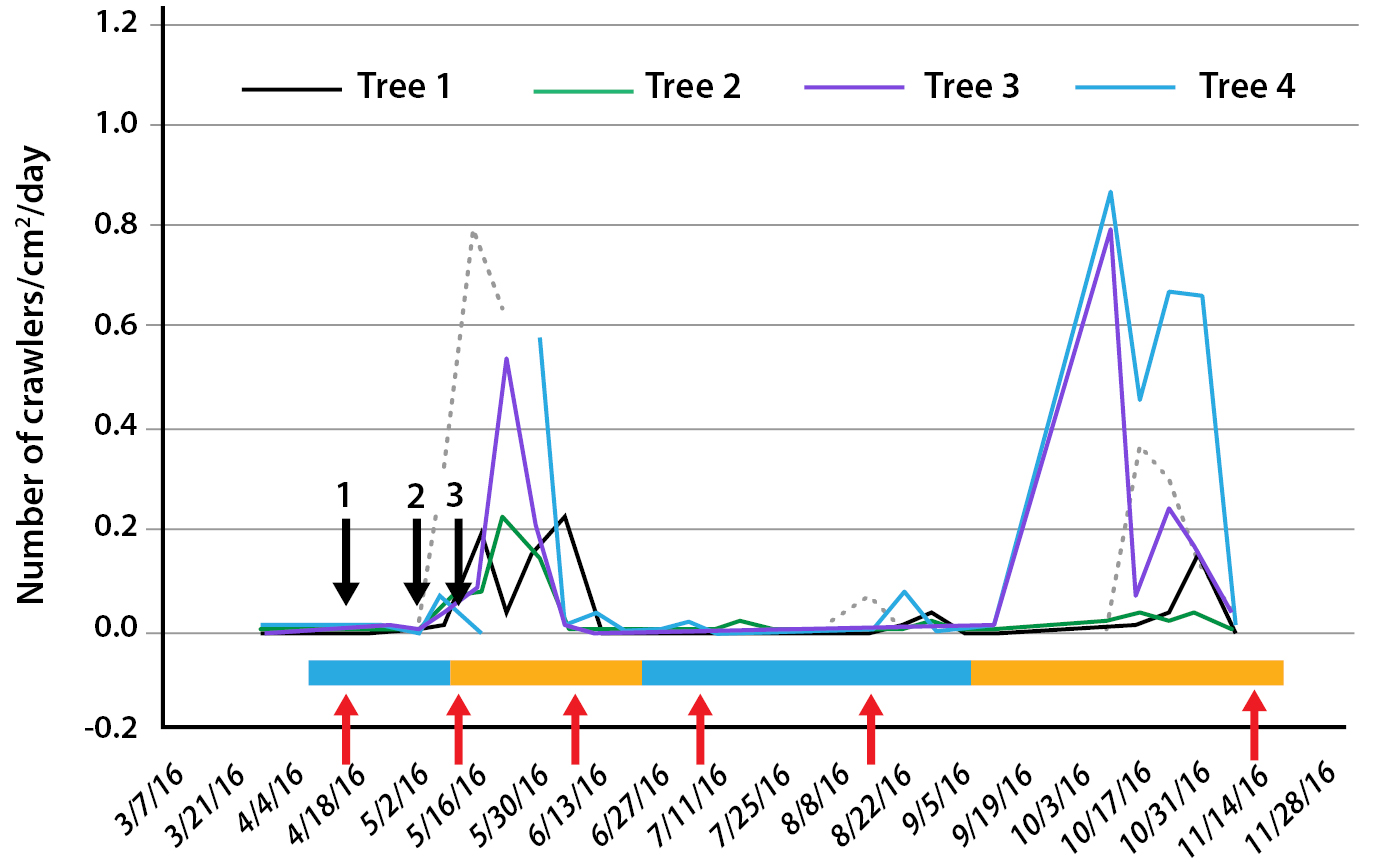 Figure 1. Crape myrtle bark scale crawler population trend in 2016 as monitored on untreated trees at the field trial location. Three applications of treatments (black arrows) were applied at the early stage of crawler emergence on April 14, May 2 and May 12, 2016. Number of nymphs (blue) or adults (orange) were counted on (red arrows from left to right) May 12, May 31, June 30, Aug. 10 and Nov. 9, 2016. 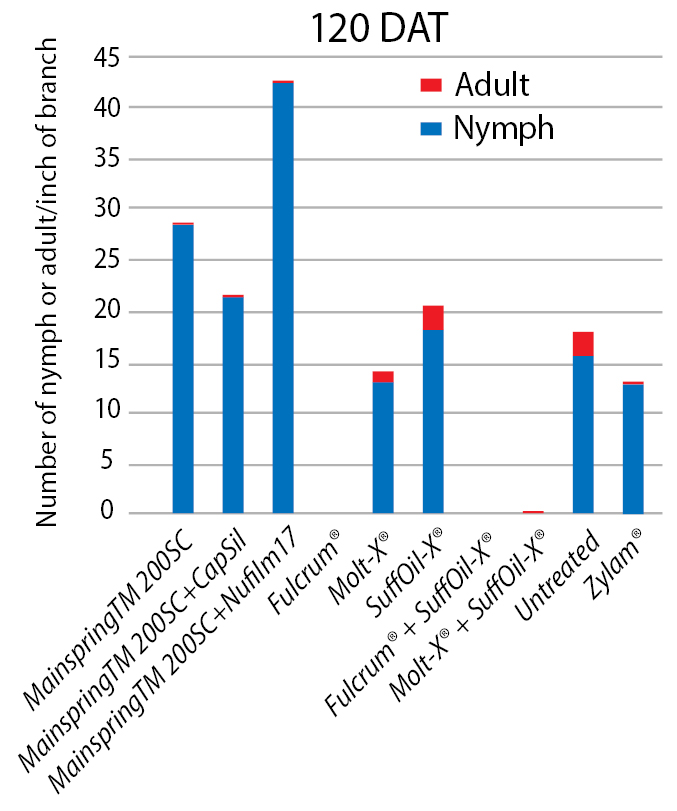