Homeschooling Grows in Louisiana and the United States

Parents list many reasons for choosing homeschooling. Homeschooling offers the opportunity for religion-based education and offers the opportunity for more child-centered (as opposed to group- or class-centered) approaches that consider the distinct needs, interests, aspirations and capabilities of individual children. Some parents start homeschooling in kindergarten or even before. For most parents, however, the decision to homeschool was only made after their children’s initial experiences with public or private schools did not work out. For example, 75 percent of all homeschooled high school students in 2012 had previously been enrolled in school in earlier grades.

States have responded differently to the growth of homeschooling. Some have instituted regulations. Others have moved to protect parents’ rights to home-school. Some have done both.

The percentages of homeschoolers in each of the 12 states that maintained data from 2011 to 2015 are shown in Figure 1. The percentages range from 1.5 percent to 3.5 percent for most states. The three outliers are North Carolina – with an exceptionally high rate, increasing from about 5 percent to nearly 6.5 percent – and Connecticut and Pennsylvania, both with low homeschooling rates.

The unadjusted average (bright red line) showed a slight increase over this five-year period from about 2.3 percent to 2.7 percent. Homeschooling rates increased from 2011 to 2015 in eight states but stayed the same or declined in Virginia, Delaware, Pennsylvania and Connecticut.

Louisiana estimates (black line) determined in the AgCenter study are statistically adjusted (both increased and decreased) based on the following six factors associated with homeschooling:

Using these adjustments, researchers estimate that Louisiana’s homeschooling rate increased from 2.5 percent in 2011 to 4.1 percent in 2015. This technique should provide better estimates than simply using the unadjusted average. Still, two factors reduce the precision of these estimates: (1) the small number of states for which data are available and (2) the fact that North Carolina, an outlier, shares some key characteristics with Louisiana. The AgCenter researchers suggest it is more likely that Louisiana’s homeschooling rates are slightly lower, somewhere between this estimate and the unadjusted average. If correct, Louisiana’s homeschooling population ranged from 18,500 to 20,000 in 2011 and increased to between 21,000 and 33,000 students in 2015.

Parental protections served to expand the range of options for parents:

Louisiana is generally following national trends in homeschooling rates and counts, support organization prevalence and state regulatory environment, but additional changes over time should be expected as long as homeschooling continues to increase in popularity.

More research is needed to further explore the causes and implications of homeschooling expansion in Louisiana and across the nation. One area that needs additional research involves homeschool-school relationships. Many students classified as homeschoolers (sometimes referred to as flexischoolers or part-time homeschoolers) go to a local school for some courses or topics. Other home-schoolers take advantage of school-based extracurricular activities, including language, arts and sports programs.

A third area that should be studied more is the emergence of online public schools (also called e-schools or virtual schools). In many cases these schools are developed and offered through local public school systems and serve as a hybrid system in which children are technically enrolled in a public school but actually stay home and receive most or all of their instruction online.

Go to sidebar on Homeschoolers in Louisiana 4-H. 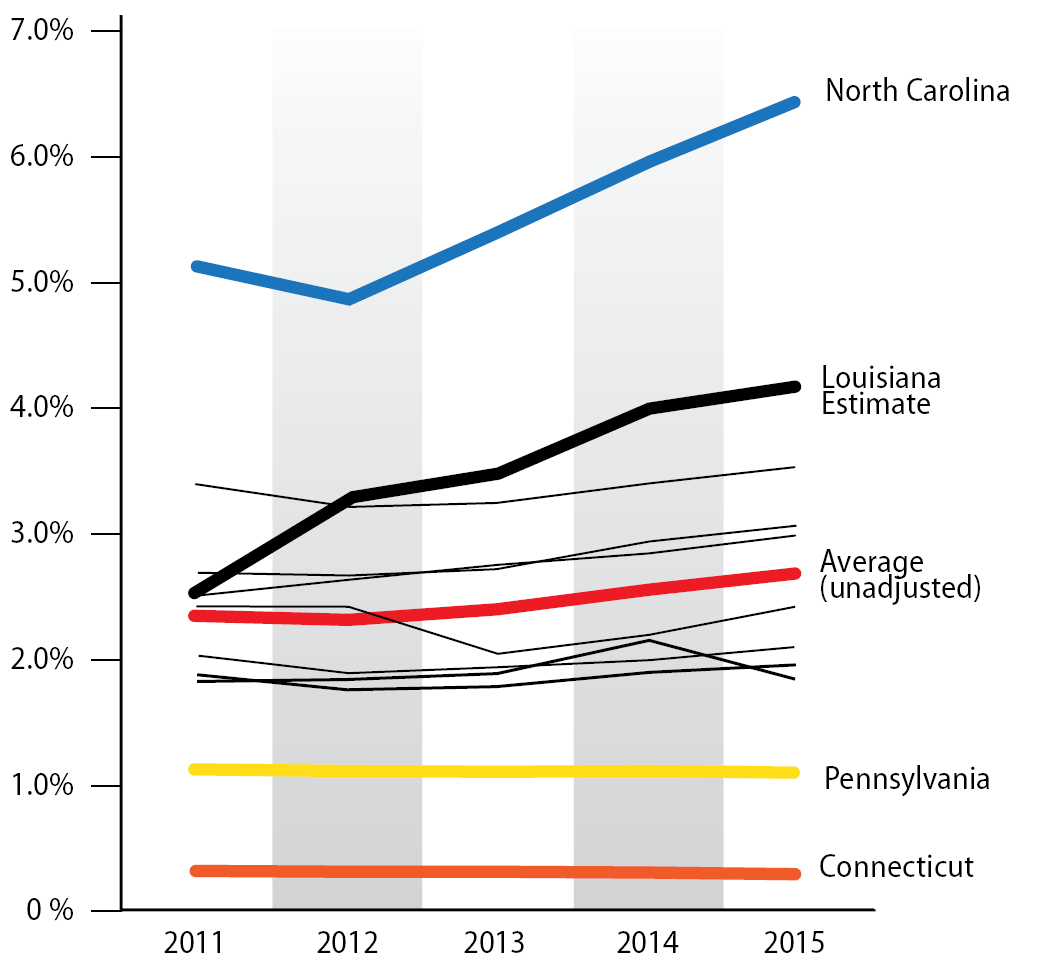 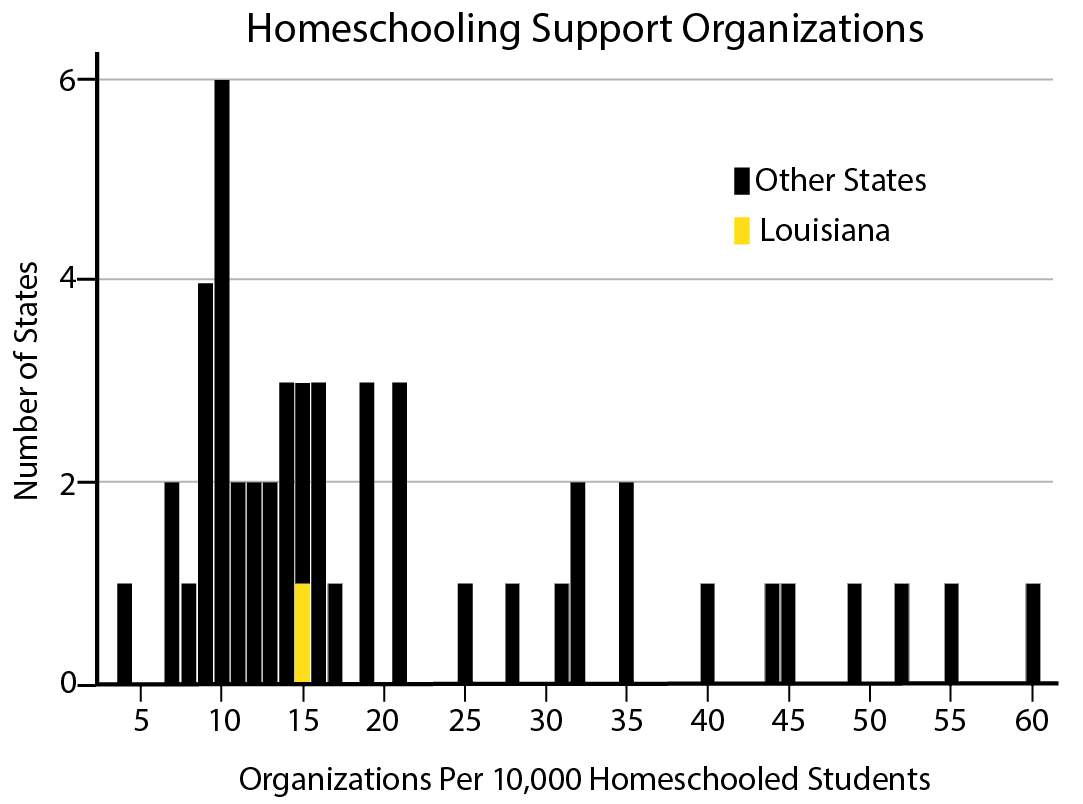 Figure 2. Each short bar represents a state. Short bars are stacked when more than one are in the same category. For example, the short gold bar represents Louisiana. It has 15 organizations per 10,000 homeschooled students along with two other states. States with more organizations provide more support for homeschooling families. 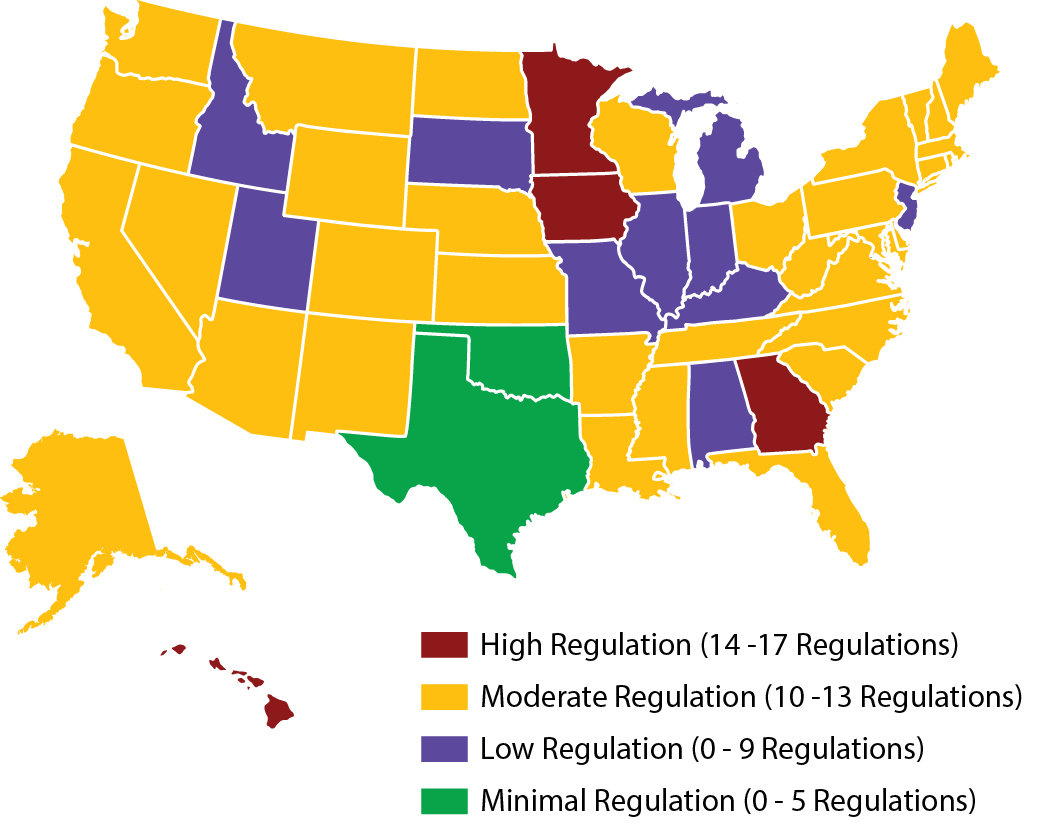