Extending Grazing Through Fall and Winter

Is stockpiled bermudagrass an option for pregnant beef cows during mid-to-late gestation?

A large portion of cow/calf enterprise production costs are associated with hay feeding that occurs when standing forage nutritive value and/or quantity are low. Extending grazing through fall and winter reduces the amount of harvested forage needed to maintain cow performance and could reduce production costs associated with winter feeding. Grazing can be extended by different forage management practices, including the use of stockpiled forage. Stockpiling refers to the practice of allowing forage biomass to accumulate in the field until it is needed for grazing. Forages are generally stockpiled for use during the fall and winter, but they can be accumulated for use during any period of expected deficiency. In the southern United States, bermudagrass stands are mainly used for grazing or hay. There is little information on managing stockpiled bermudagrass for the specific purpose of providing fall and winter grazing and thereby reducing the cost of feeding winter hay.

If a medium-quality (8 percent crude protein and 54 percent total digestible nutrients) bermudagrass round bale weighs 1,100 pounds, the average body weight of 20 mature cows is 1,300 pounds and they can consume 2.25 percent of their body weight of that hay per day (29.25 pounds), then one bale is enough for almost two days. Based on these figures, keeping 20 cows on stockpiled bermudagrass for 60 days can theoretically save 30 bales of hay. If this saving is possible, at $50 per bale, a producer can save up to $75 per cow, assuming other costs (fertilizer, labor, fence supplies) are similar. The question, however, is if the nutritive value of stockpiled bermudagrass is enough to provide a pregnant beef cow with enough protein and energy to cover her nutrient requirements?

The attributes of bermudagrass that make it a widely used forage in the South include high biomass production potential, the ability to withstand sustained intense grazing pressure, acceptable palatability, the absence of low-quality components and tolerance to stress agents such as drought, insects and diseases.

Stockpiling forages is an important management practice to reduce wintering cattle on hay, reduce labor and other costs and mitigate damage to the ground when wet. Even though true, stockpiling bermudagrass has its own issues. The landscape in central and south Louisiana is flat; hence, there is always risk of flooding or draining accumulated rainwater from the fields. Also, rainfall can affect nutrient content of stockpiled bermudagrass.

At the Dean Lee Research Station and the Iberia Research Station, pastures of the bermudagrass hybrid Alicia were stockpiled in three consecutive years. Hay was harvested in late August and the pastures were fertilized with nitrogen and allowed to re-grow. These pastures were not grazed until sufficient forage mass was produced, which occurred in late November. Pastures were stocked using strip grazing, which was moved every day. Each year, two groups of 20 pregnant cows with an average body weight of 1,369 pounds and body condition score of 5.1 (in a scale of 1=emaciated to 9=obese) were used.

Figures 1 and 2 represent the nutritive value of the bermudagrass stockpiled at the Dean Lee Research Station in the 2012-2013 season. The numbers in the graph between vertical lines represent inches of rain during that time. In the two weeks between September 19 and October 4, 1.43 inches of rain produced a decrease in percent of total digestible nutrients and increases in the concentration of neutral detergent fiber, which causes a reduction in matter intake and acid detergent fiber, which decreases digestibility, (Figure 1) as well as a sharp decrease in crude protein (Figure 2). This period was followed by a relative dry period in which 1 inch of rain fell in two months. During this time, the nutritive value of the bermudagrass remained unchanged. After December 4, 18.2 inches of rain affected the nutritive value of the grass. The yellow vertical line in Figures 1 and 2 represents the date of the first frost, which did not affect the nutritive value.

Table 1 shows the changes in body weight and body condition score of the cows used in both experiments as well as the length of the grazing period. Clearly, cows grazing only stockpiled bermudagrass did not meet their nutritional requirements because they lost weight and condition during the experimental periods, which varied with year and location. All cows were starting their last trimester of gestation. During this time, the fetus grows exponentially and the cow’s requirements also increase substantially.

Figure 3 shows the changes in nutritive value we observed at both locations through the years. The green vertical line represents grazing initiation. The blue (percent total digestible nutrients) and red (percent crude protein) horizontal lines represent the nutritional requirements of cows in two different physiological stages: non-lactating and pregnant (last third of gestation) and non-lactating and not pregnant. While the pregnant female has greater requirements because she is at the last stage of gestation, the non-pregnant female has only maintenance requirements, which are less. Figure 3 shows 1,200-pound open dry cows have requirements for total digestible nutrients (blue line) and crude protein (red line) that were met by the stockpiled bermudagrass; hence, they could be wintered on it without any problems. The nutritional requirements of pregnant cows, however, are greater, and the results indicate that total digestible nutrients were not met by the stockpiled bermudagrass, and crude protein was only marginally met by the forage. Based on these data, pregnant cows would require a feed supplement if grazing stockpiled bermudagrass.

Stockpiled forages have at least a couple of months of accumulation. It is recommended to strip-graze all stockpiled forages to avoid trampling and improve consumption of the forage (Picture 1) and uniform distribution of feces (Picture 2).

Stockpiled bermudagrass may help saving hay. This practice can be used with animals that have low nutrient requirements such as open mature cows. If producers want to use it with pregnant cows, then these should be supplemented. The Iberia Research Station has successfully maintained or improved condition in pregnant cows grazing on stockpiled bermudagrass with daily supplements of 0.7 percent of their body weight in soybean hull pellets (9 pounds per day for a 1,300-pound cow) or 0.4 percent of body weight in ground corn (5 pounds per day for a 1,300-pound cow). Weather, mainly rainfall, influences how quickly the stockpiled material can deteriorate. If soils are flooded, cattle will reduce dry matter intake from standing forages such as stockpiled bermudagrass. And depending on how long those soils remain with standing water, a pregnant cow’s condition can quickly deteriorate. 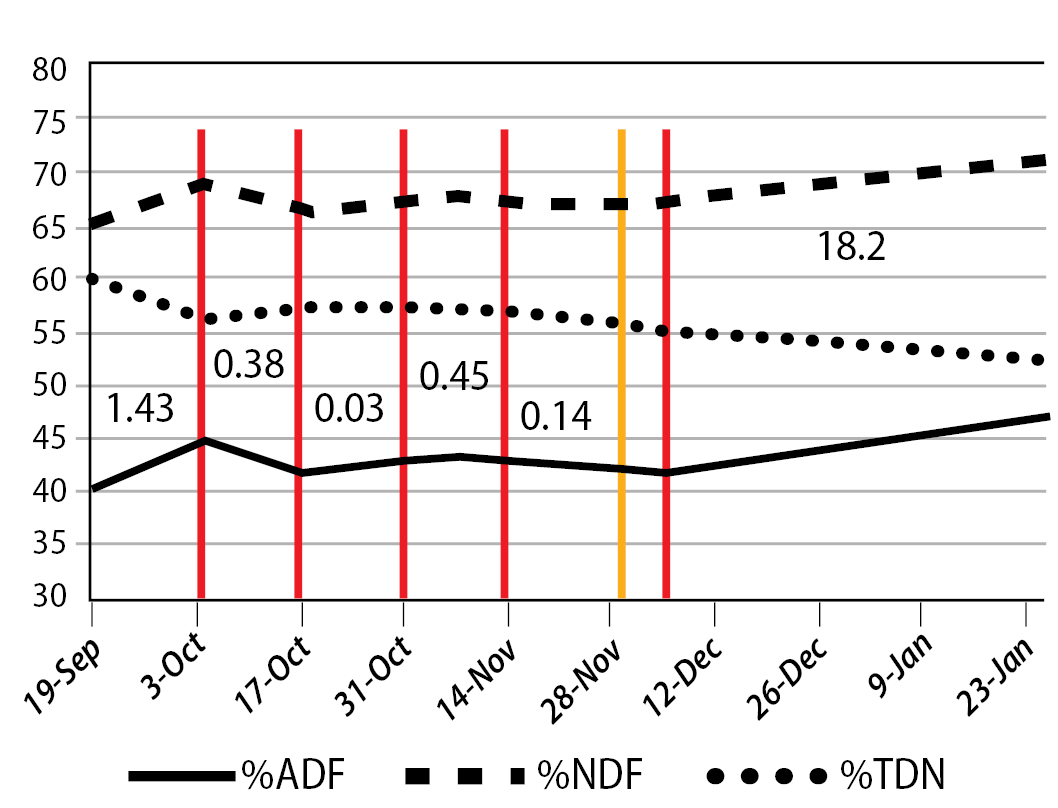 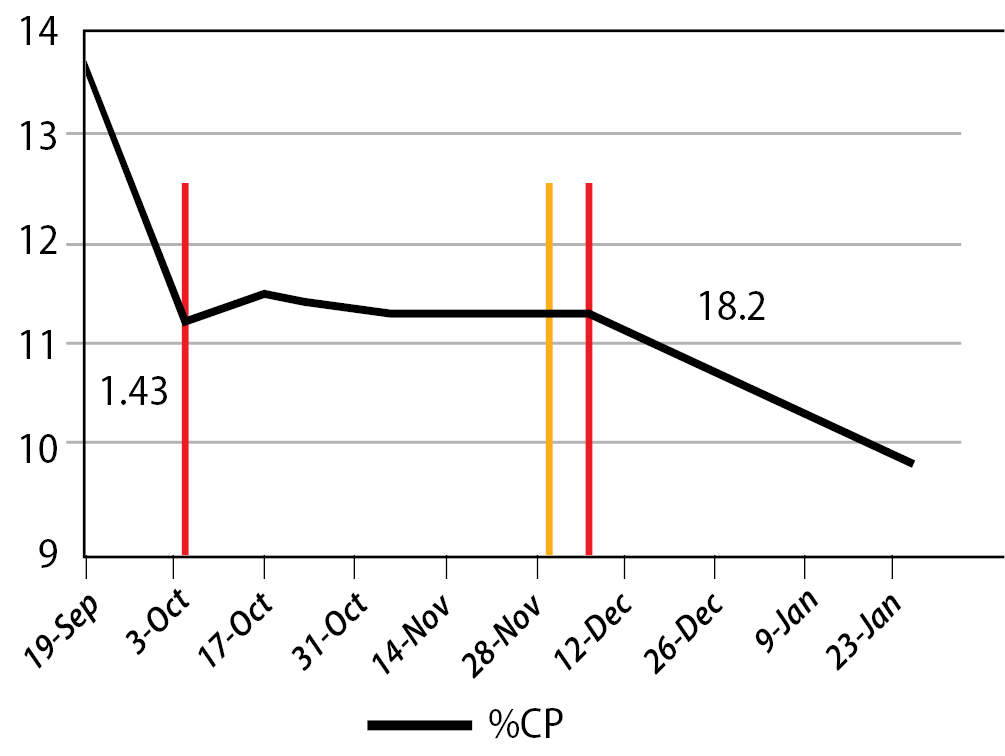 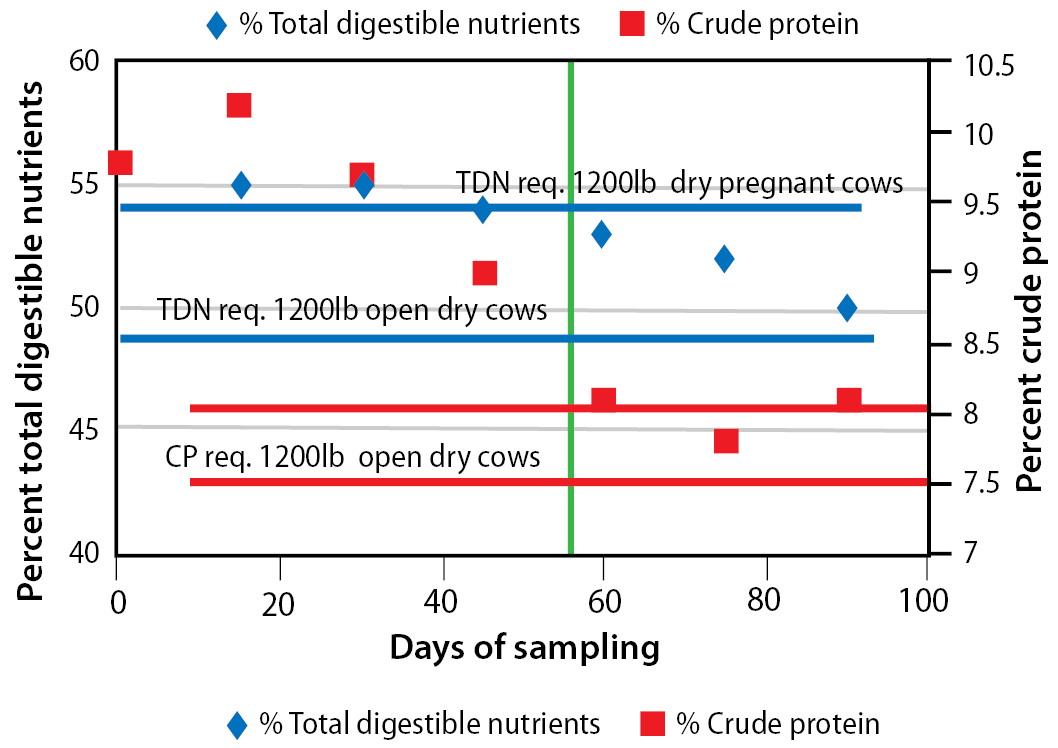