Louisiana has the opportunity to grow abundant forage. Warm-season perennial grasses – primarily bermudagrass and bahiagrass, sometimes associated with dallisgrass – are the core of the forage systems. Annual summer legumes and grasses (cowpeas, sorghum-sudan hybrids and pearl millet) can complement these resources. In winter, cool-season annual grasses (oats, cereal rye and annual ryegrass) or legumes (ball, crimson, berseem and white clovers, among others) can be planted successfully. Even though many species can fit into the different ecoregions of the Southeastern U.S., warm-season perennial grasses have traditionally been the forage base for beef cattle systems.

These warm-season perennial grasses, however, do not provide an adequate, year-round supply of feed or adequate nutrition for growing cattle. A few alternatives can extend the grazing season and reduce the hay-feeding periods, also called transition or gap periods. These periods, May and June and October through December, are usually accompanied by stockpiled or conserved forages, which, depending on the nutrient requirements of the animal, may or may not need to be supplemented. Because of the increased use of cover crops in the Northeast, Midwest and upper Midwest, producers in the Southeast have become familiar with forage alternatives that can be used for grazing. Forage brassica crops such as turnip, swede, rape and kale can be used to extend the grazing season in November and December.

Forage brassicas are annual crops with great nutritive value and can be grazed 80 to 150 days after seeding, depending on the species and region of the country. The leafy top is grazed, and the roots, if an animal can get to them, contain protein and carbohydrates. Despite these advantages, these forages require appropriate management not only for their own productivity but also for the grazing animals. Research efforts are underway to better understand their management and their impact on soil health, as well as their use and response under grazing conditions.

In two consecutive years, brassicas in combination with grasses and legumes were planted in early October at the LSU AgCenter Iberia Research Station in Jeanerette. The objective was to evaluate their performance and their possible inclusion to cover the fall transition period in year-round forage systems. A mix of annual ryegrass, cereal rye, radish, oats, purple top turnip, kale, white clover and red clover was sown into a bermudagrass-free sod and into a bermudagrass sod from which hay had been harvested a couple of weeks earlier so the pasture was short and lightly disked before planting.

After 20-26 days of planting, the stand in both years was mostly brassicas (Photos 1 and 2). Forty days after planting, pastures were fertilized with nitrogen. Starting in early December, mature, non-pregnant cows averaging 1,300 pounds were rotated daily (Photos 3, 4 and 5) to provide enough pasture for one day. On average, cows grazed these pastures until early April, with ryegrass and clovers making the greatest contribution of forage; however, brassicas represented an insignificant portion of the pasture after 60 days of grazing them. During these 60 days, cows gained 45 pounds and maintained a body condition score of 7 on a scale of 1=emaciated to 9=obese.

As to be expected, the nutritive value of these forages was very good. Values are similar to what can be expected from annual ryegrass and some of the clovers that are used for grazing in Louisiana. Dry matter content, though, is very low; nearly 90 percent of the fresh weight is water. Because of this, young cattle consuming only brassicas must also have hay available. The hay will help digestion and give gut fill, which is needed for correct ruminal function. If no hay is available, this problem can be avoided by combining the brassicas with grasses and clovers. Instead of hay, these grasses and legumes will provide the necessary effective fiber. Adult cattle are less prone to have this problem, although care should be taken for a few days after cattle transition from a different diet into a brassica-based one.

Before using brassicas for grazing, a producer should know they may cause health disorders in grazing animals if not managed properly, although most are easy to control. The main disorders are bloat, atypical pneumonia, nitrate poisoning, hemolytic anemia (mainly with kale), hypothyroidism, polioencephalomalacia and choking by ingesting bulbs. None of these disorders occurred during this research. Once cattle discover the turnip bulbs (Photo 6), they will pick up the bulbs and try to chew them to reduce their size. Some of these bulbs may be large enough to become a choking hazard, especially with young cattle. Radishes (Photo 7) may be more difficult for cattle to pick up.

Several issues require further research. Based on the objective of producing green forage for the transition period, for example, it may have been more productive to start grazing in early October. So, can brassicas be planted in August or earlier? Can they be mixed with some other summer or winter annual grass or legumes to improve forage production in October to December? Other issues include differences in nutritive value among varieties, response to drought or excessive rainfall, fertilization requirements, best combination with forage species and when to initiate grazing. Continuing research should resolve some of these issues.

Guillermo Scaglia is a professor at the Iberia Research Station and beef cattle initiative coordinator for the Southwest Region.

Table 1. Nutritive value of brassicas. Foliage and bulbs only from turnips were collected, separated and analyzed in a commercial laboratory. Data are the means of samples taken at three sampling times during the grazing period in two consecutive years.

Photo 2. Brassicas on a bermudagrass sod, late October 2014. After harvesting hay, the sod was lightly disked an average of 10 days before planting each of two years. Photo by Guillermo Scaglia

Photo 3. Forage height was approximately 11 inches at the start of grazing in the pasture planted on bermudagrass-free sod. Photo by Guillermo Scaglia

Photo 4. Cows were rotationally stocked and moved daily to small areas for grazing. This allows for even grazing, avoiding trampling and improving manure distribution. Photo by Guillermo Scaglia

Photo 5. The difference between pasture areas the day following grazing (left) and the grazing will begin (right). Photo by Guillermo Scaglia 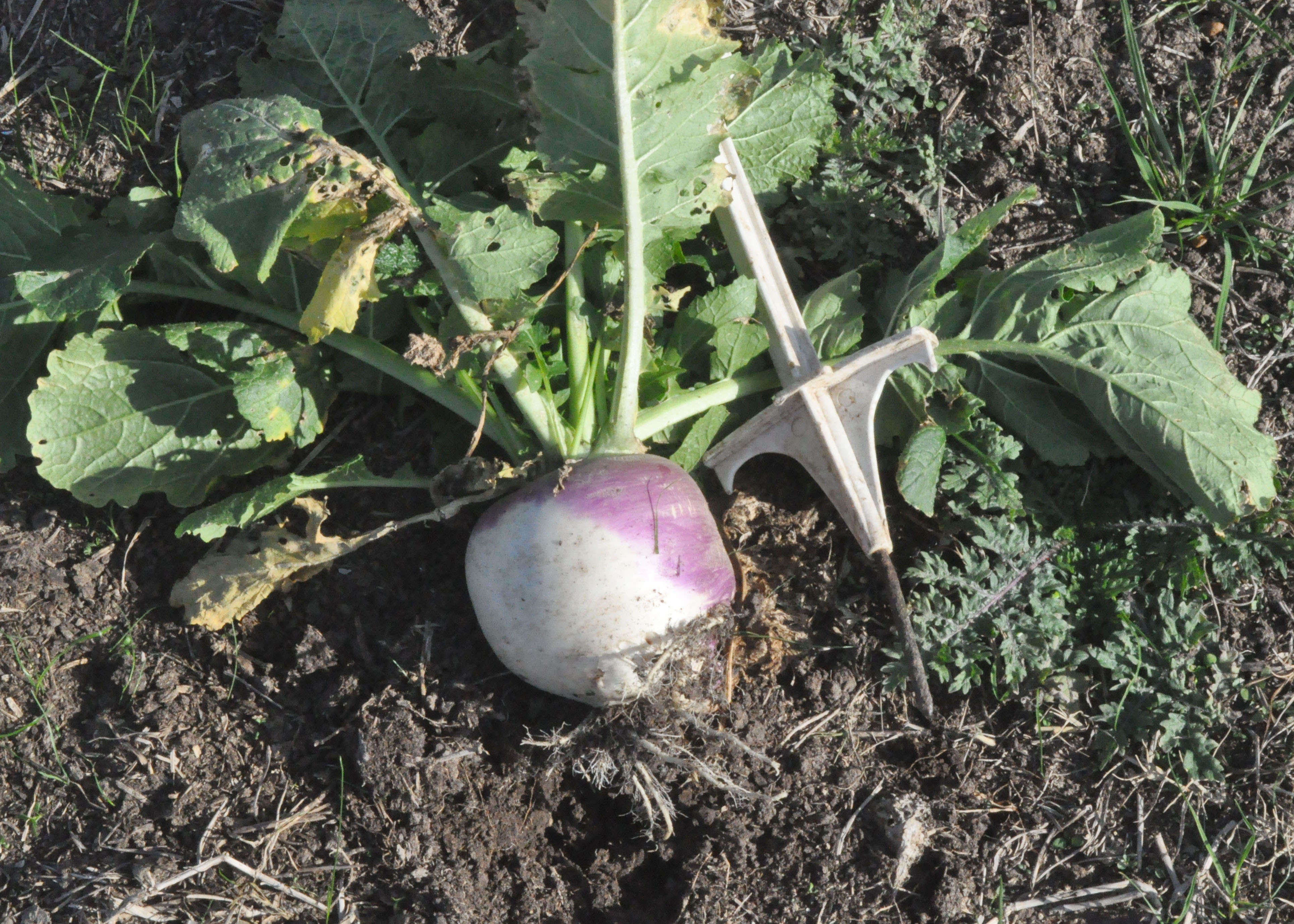 Turnips are the bulbs of preference because they are easier to pick up than radishes. Photo by Guillermo Scaglia 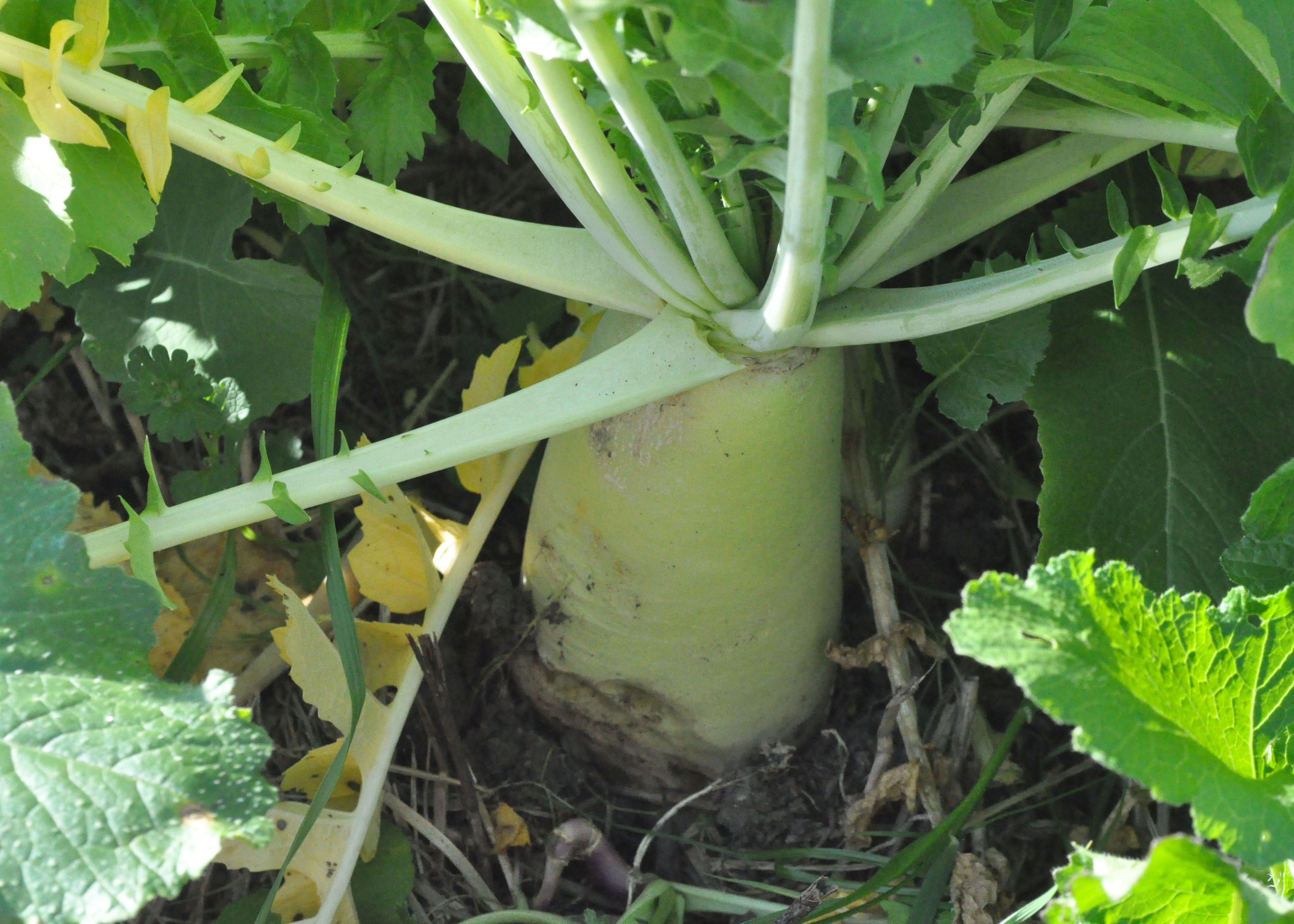 A radish. Photo by Guillermo Scaglia