The Mexican rice borer (Figure 1), Eoreuma loftini, is a damaging pest of grass crops including rice, sugarcane and corn. The invasive species was first detected in Texas in 1980 and spread eastward reaching Louisiana in 2008. This pest has potential to cause significant yield losses in rice and sugarcane if infestations are left unmanaged. For more than a decade, entomologists with the LSU AgCenter have been monitoring the pest’s eastward expansion and working to develop effective management tactics to protect Louisiana’s rice and sugarcane.

Since 2000, Mexican rice borer populations in Texas and Louisiana have been monitored with traps (Figure 2). These traps are baited with a female sex pheromone that attracts male moths and are effective at detecting Mexican rice borer populations even at low densities. Because only the males, which do not lay eggs, are attracted to the traps, there is no risk of increasing the spread of this species through trapping efforts.

Since 2008, the species has spread eastward at an average rate of 10 to 15 miles per year. The Mexican rice borer has now been found in nine Louisiana parishes, including almost all of the major rice-producing parishes in southwest Louisiana: Calcasieu, Beauregard, Allen, Cameron, Jefferson Davis, Acadia, Vermilion, Evangeline and St. Landry parishes (Figure 3). The pest now infests sugarcane on the western edge of the sugarcane production area in Calcasieu, Jefferson Davis and Vermilion parishes. Rates of expansion are anticipated to increase as greater amounts of infested sugarcane are being transported to sugar mills farther east.

Pheromone traps are also used to identify “hot spots” of high Mexican rice borer populations. An extensive monitoring program involving more than 75 pheromone traps has recorded population levels across southwest Louisiana for the past three years. Spatial analysis using Geographical Information Systems was used to map Mexican rice borer populations (Figure 4). High trap captures occurred across Calcasieu and Cameron parishes in 2013. By 2014, populations in southern Jefferson Davis Parish had reached damaging levels. In 2015, high trap captures were recorded across Jefferson Davis Parish and in parts of Acadia Parish. These data indicate that once established in a new area, Mexican rice borer populations can reach damaging levels in just a few years. Captures in the more northern parishes of Beauregard, Allen and Evangeline remained low in each year. This suggests cooler winter temperatures at higher latitudes might reduce the potential for damaging infestations to develop in these areas.

Female Mexican rice borer moths lay their eggs on leaves and stems of rice, sugarcane, corn and numerous weedy grasses. Early larval feeding on plant surfaces causes characteristic orange-tan lesions in rice (Figure 5a). Yield losses occur when larvae then bore into stems and feed internally. Feeding that occurs on young rice and sugarcane often results in plant death. In rice, feeding that occurs after panicle initiation often results in a panicle that does not produce grain, which is referred to as “whitehead” (Figure 5b). In 2013, infestations in some fields in Calcasieu Parish caused nearly 4 percent of plants to have whiteheads, resulting in yield loss.

The Mexican rice borer is the primary pest of sugarcane in Texas and has proven difficult to manage because of the feeding habits of the larvae that shelter them from beneficial insects and insecticides. Infestations in Louisiana sugarcane were first detected in 2012 in Calcasieu Parish. Contrary to expectations, however, these infestations have been slow to develop. Mexican rice borer injury in Louisiana sugarcane has remained below 3 percent bored internodes in each of the past three years. Nevertheless, the potential for development of damaging infestations remains high, and drought conditions are known to exacerbate Mexican rice borer problems.

Control of the Mexican rice borer can be achieved through a combination of tactics. The insecticidal seed treatment Dermacor X-100 applied to rice for control of the rice water weevil provides effective control of stem borers. Foliar applications of pyrethroid insecticides are labeled for stem borer control in rice, although timing recommendations have not been developed. Additionally, early planting and removing rice stubble after harvest will aid in reducing infestations.

In sugarcane, reduced-risk insecticides, including insect growth regulators and diamides, have shown some potential for effective Mexican rice borer management. However, timing of insecticide applications is made difficult by overlapping generations and the cryptic nature of larvae. The threshold to trigger an insecticide application for control of the sugarcane borer, another pest of sugarcane, can also be used for the Mexican rice borer. This threshold is 5 percent of stalks with larvae on plant surfaces, and mixed infestations of the two borer species can be treated as a complex. Additionally, sugarcane varieties with some levels of resistance to the Mexican rice borer have been identified. In both sugarcane and rice, pheromone traps can be used to alert growers for the presence of potentially damaging populations and might help growers decide whether to use foliar insecticides.

Because the Mexican rice borer feeds on weedy grasses and multiple crop hosts, there is no chance of eradicating the pest or preventing further range expansion. The invasive pest is expected to continue spreading eastward at its current rate, but much more rapid expansions can occur. An isolated population of the pest was detected in central Florida in 2012. This is thought to be the result human-aided movement, although the nature of this movement remains unclear.

LSU AgCenter entomologists along with the Louisiana Department of Agriculture and Forestry will continue to monitor range expansion and alert growers when the pest has been detected in new areas. Increased awareness of the Mexican rice borer and cooperative efforts among LSU AgCenter personnel, rice and sugarcane growers, and other stakeholders will be needed to reduce the impact of this new pest. Involving growers and other stakeholders in the pheromone trap monitoring program is one way to improve early detection and awareness of this pest. If you are interested in obtaining pheromone traps to monitor fields, contact Mike Stout at mstout@agcenter.lsu.edu.

Researchers from the LSU AgCenter and Texas A&M were recently awarded a grant from the U.S. Department of Agriculture to study additional tactics for minimizing the impact of Mexican rice borers in Louisiana rice and to educate stakeholders in the state about this new threat. Experiments are being conducted to determine optimal rates of Dermacor X-100 for control of both rice water weevils and Mexican rice borers, and commercial varieties are being evaluated for possible resistance. The impact of silicon and nitrogen fertilization on borer infestations will also be assessed, and yield reductions from borer infestations will be quantified. The overall goal of this USDA-funded grant is to develop and implement a multitactic management program for the Mexican rice borer that is compatible with the management programs for the other members of the pest complex in Louisiana rice.

Blake Wilson is a graduate student in the Department of Entomology. Michael Stout holds the L.D. Newsom Professorship in Integrated Pest Management in the department. Julien Beuzelin is an assistant professor at the Dean Lee Research and Extension Center in Alexandria. Thomas E. “Gene” Reagan holds the Austin C. Thompson Distinguished Endowed Professorship in Entomology.

Figure 1. Mexican rice borer, Eoreuma loftini, larvae (a) and adult (b). Photos by Bruce Schultz (a) and Anna Meszaros (b) 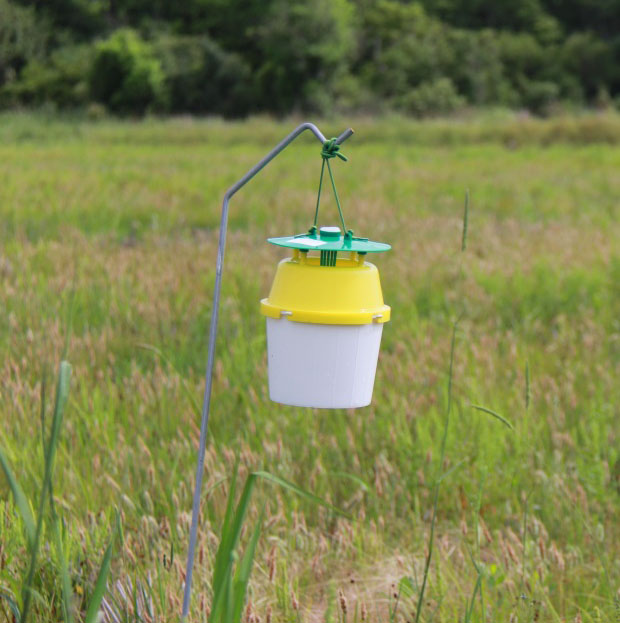 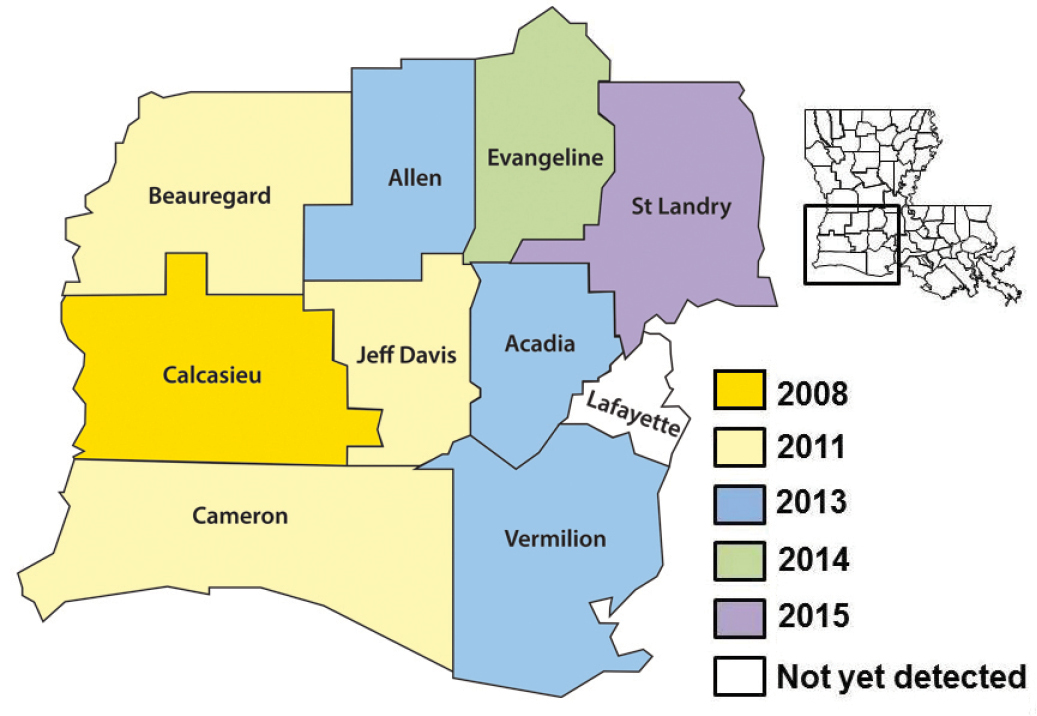 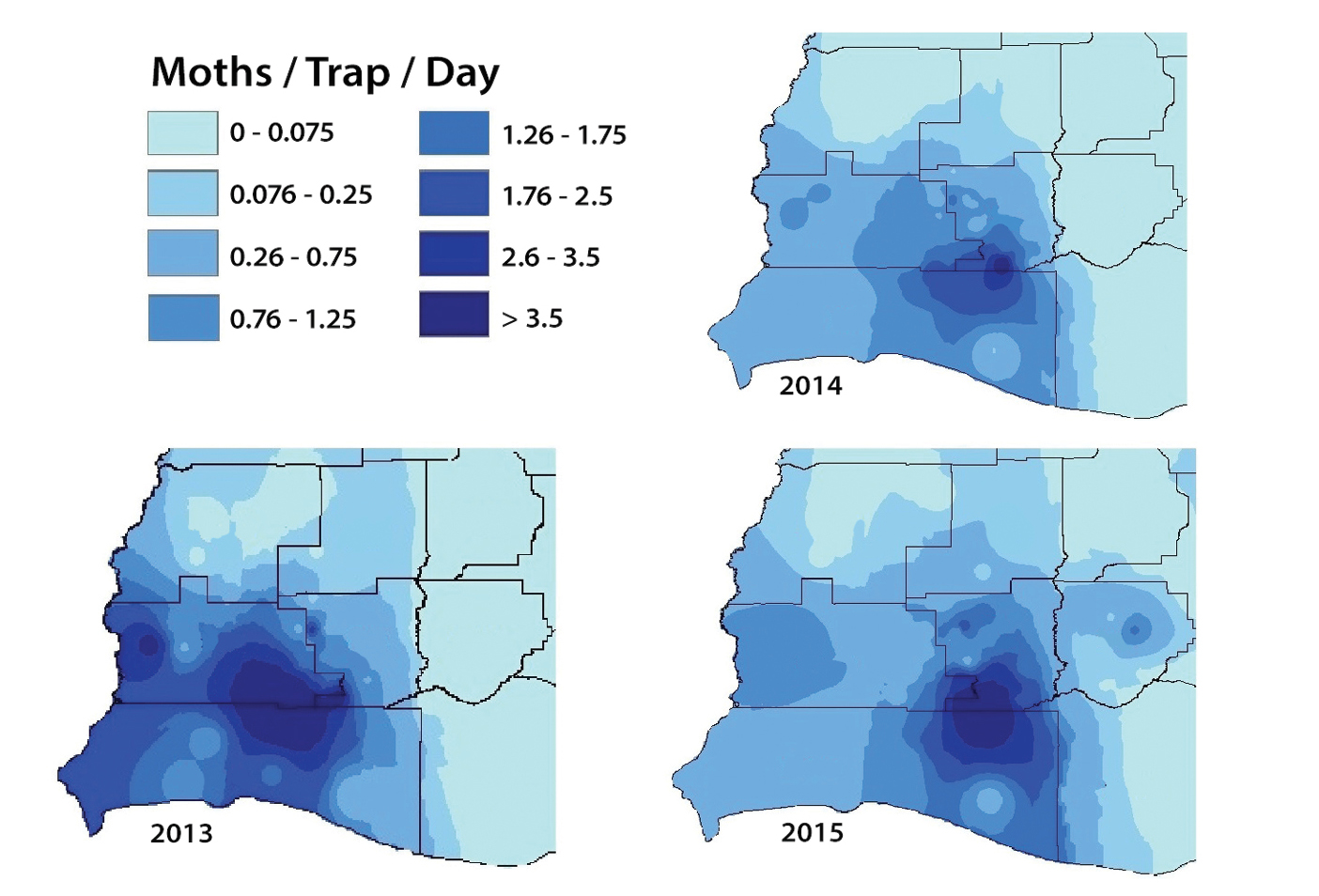 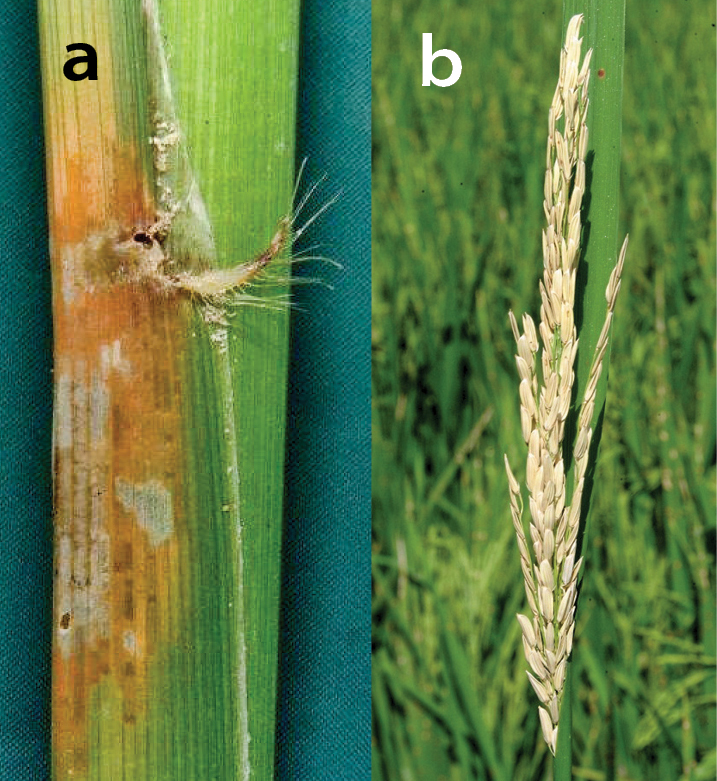