Giant salvinia is a free-floating fern native to Brazil. It is one of the world’s most invasive aquatic weeds. The first natural population in the United States was found in South Carolina in 1995. Since then it has spread across the southern U.S., with its first report in Louisiana from Toledo Bend Reservoir in 1999. Although the plant is sterile, it grows by vegetative propagation and fragmentation. It can double in size in as little as three days at optimum temperatures.

The salvinia weevil is native to Argentina, Brazil and Paraguay. Its use as a biological control agent for giant salvinia has been spectacular in tropical regions around the world. Adult weevils feed on buds and leaves while the larvae tunnel inside the rhizomes or within the leaf base.

Research conducted on Cross Lake centered on monitoring weevil populations after release and collecting any weevils that survived the winter to establish a cold-tolerant weevil colony for further study. In addition, a bucket-type, black-light trap was operated on the lake near the release sites to document the weevils’ flight activity.

Weevil releases were made on Cross Lake from 2013 through 2015. After release each year the population was monitored throughout the year and a light trap was operated to determine the weevils’ flight activity.

In 2013, weevil numbers sampled from the salvinia release sites increased from 0.2 weevils per kilogram of salvinia in May to 10.8 weevils per kilogram in late September (Figure 1). From Jan. 5-7, 2014, 40 hours of continuous freezing temperatures were recorded on Cross Lake. These temperatures are generally considered lethal to salvinia weevils. On Jan. 14, 10 samples were collected from the 2013 release sites, and 16 weevils were recovered. These weevils were used to start a cold-tolerant weevil colony in 500-gallon tanks in a greenhouse at the Red River Research Station. This colony was tested in 2015 for cold tolerance by measuring their “supercooling” point, which is the point that represents the temperature at which the weevil’s body water freezes. These weevils were found to be more cold-tolerant than weevils collected from other locations in Louisiana and from a cold-tolerant collection made in Australia. After this date, no more weevils were found in samples from Cross Lake in early 2014. This may have been because 93-98 percent of the salvinia did not survive the winter that year.

Due to the harsh winter of 2013-2014, giant salvinia on Cross Lake was killed back to small pockets located in protected areas often in association with other aquatic weeds. Because of the small amount of surviving salvinia, no weevil releases were made until August 2014. Although weevil numbers rose to 11.7 weevils per kilogram of salvinia in early October, numbers again declined, and no weevils were found to have survived the winter in early 2015.

Weevils were released again in April 2015 and by early September had risen to 28.4 weevils per kilogram of salvinia. Weevil numbers declined during fall 2015.

This research documented the problem of salvinia weevil winter survival in north Louisiana. Light-trap captures show that the weevils fly in response to increasing population levels or a decrease in food quality. The work also demonstrates the potential to use natural selection to establish a cold-tolerant weevil population. Further research is needed to determine what level of cold tolerance is needed to survive the winters in north Louisiana.

Other research efforts are focused on evaluation of agricultural row covers for the creation of winter refugia for weevils and on the optimization of weevil release methods to maximize the colonization of an area. In addition, the cold tolerance of weevil populations from South America is being evaluated in the laboratory.

Louisiana Department of Wildlife and Fisheries for funding.

Stephen Micinski is an associate professor, and Bentley Fitzpatrick is a research associate at the Red River Research Station in Bossier City, La.; Bobby Johnson is a biologist, and Steve Williams is an environmental control officer with the City of Shreveport, La. 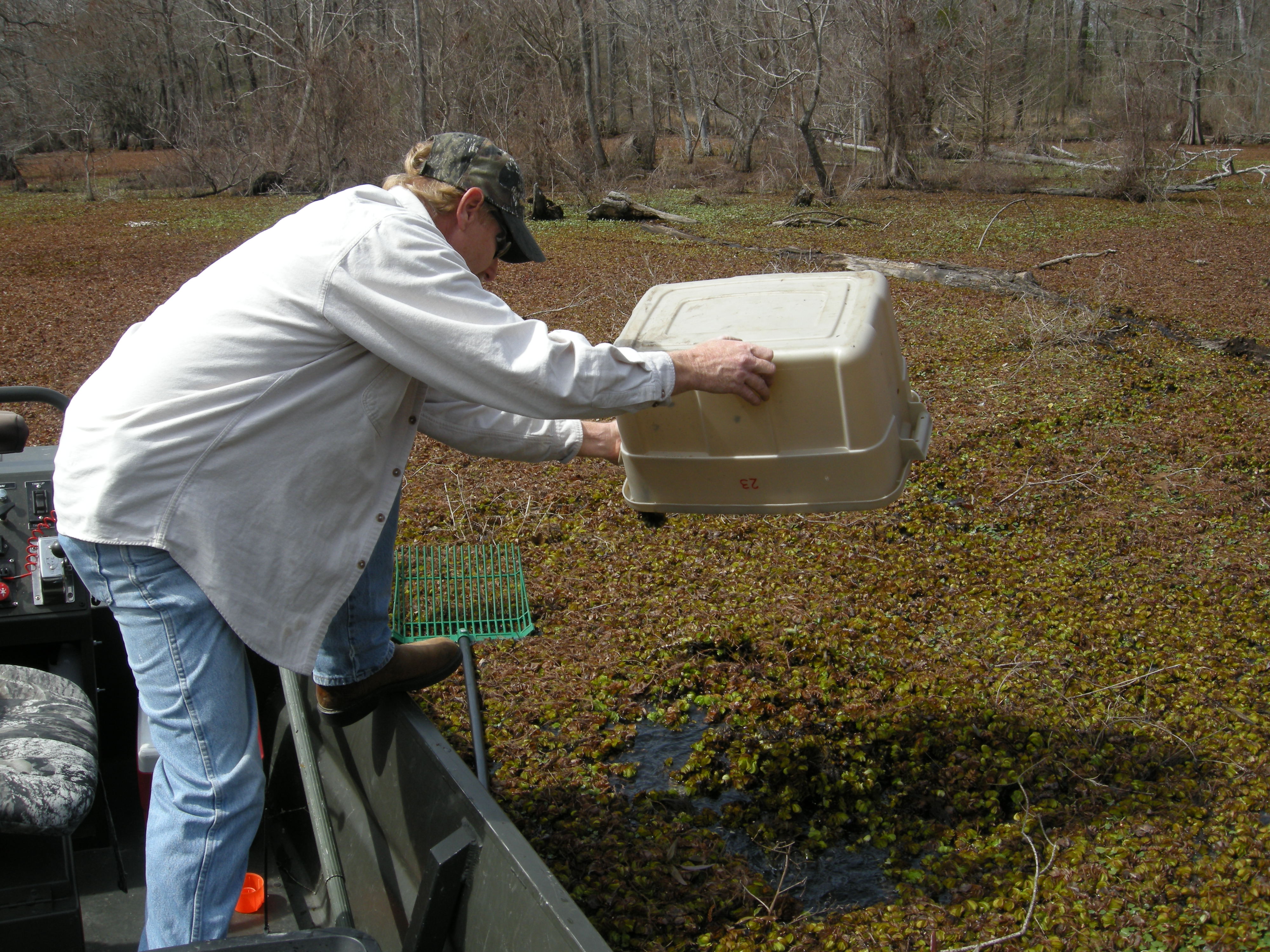 Bobby Johnson, City of Shreveport, releases weevils on Cross Lake in March 2013 that had been collected from the AgCenter weevil nursery in Houma, Louisiana. Photo by Stephen Micinski 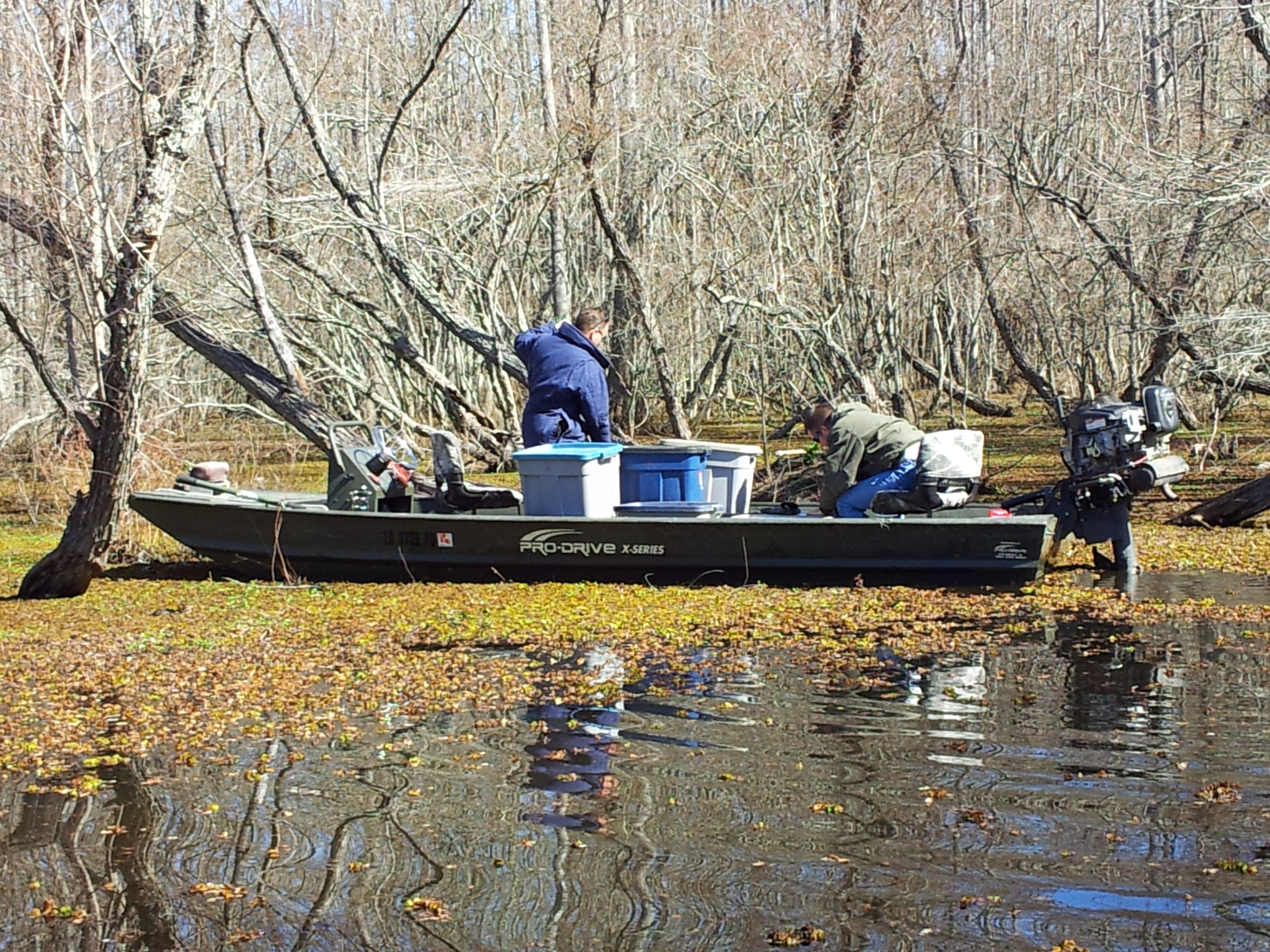 Release area in 2015 on Cross Lake. Dark areas are weevil-infested salvinia that had been collected from the AgCenter weevil nursery in Houma, Louisiana. Photo by Stephen Micinski 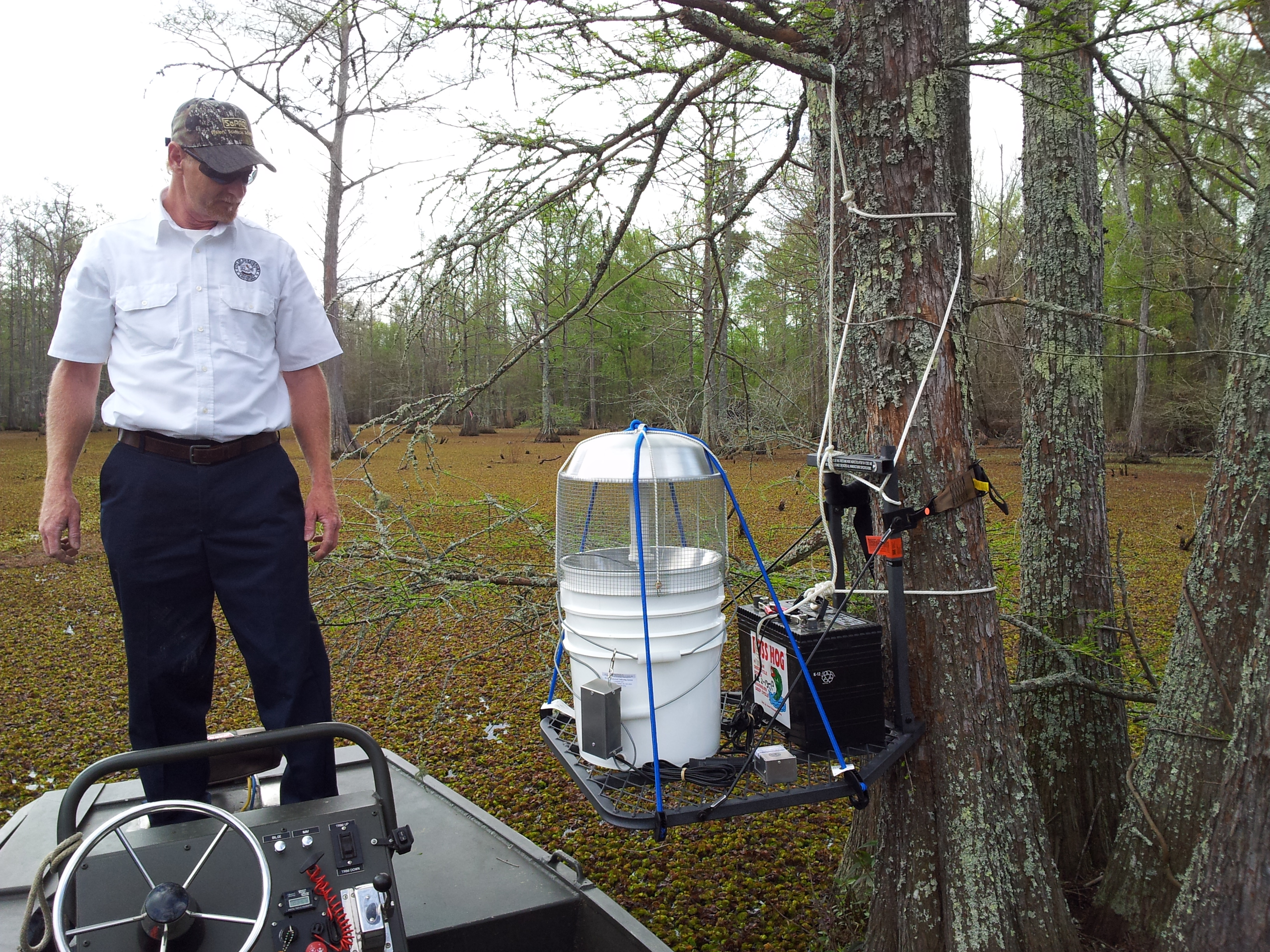 Bobby Johnson, City of Shreveport, helps set up a black-light trap near a weevil release area in 2013. Photo by Stephen Micinski 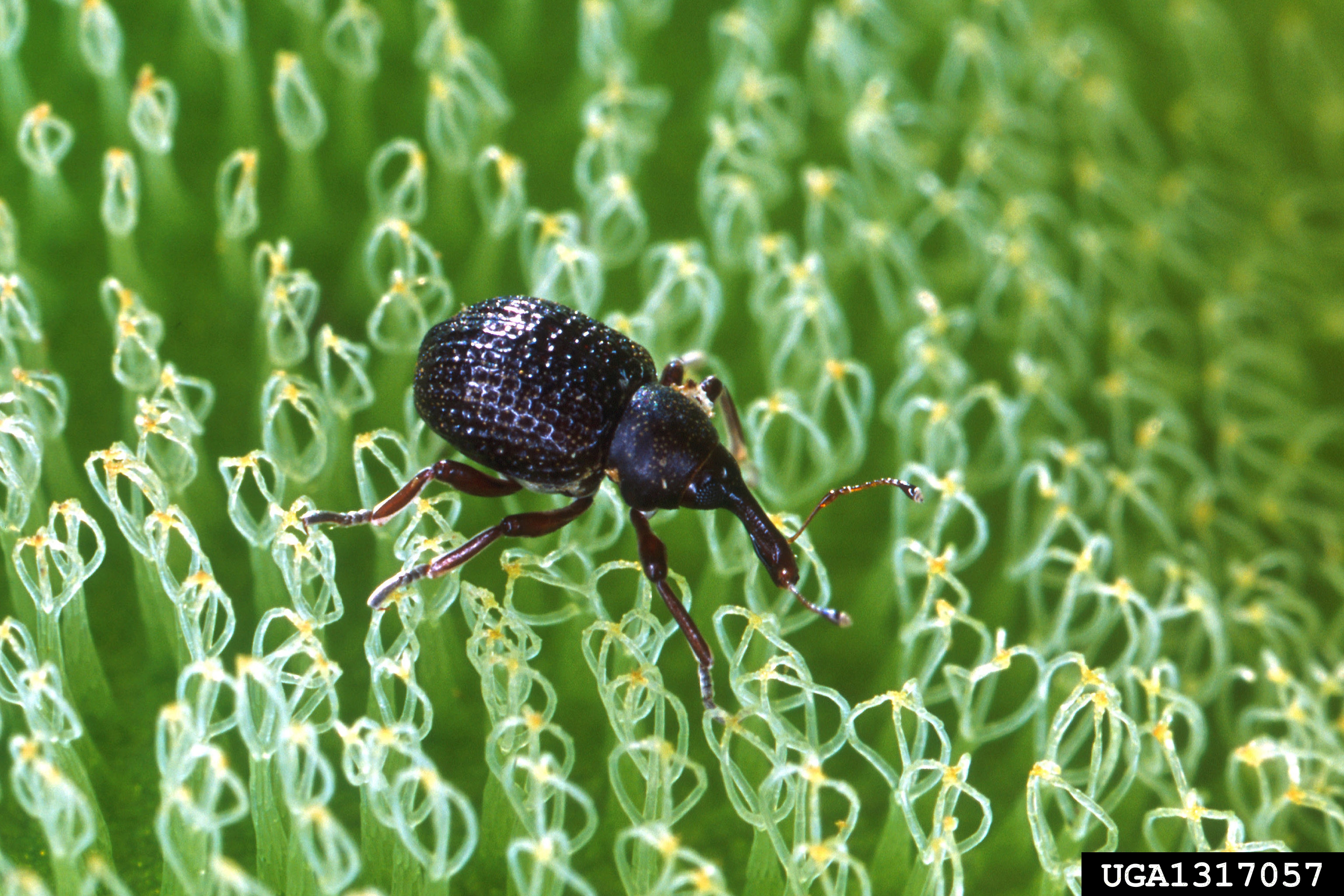 Figure 1. Salvinia weevil population changes after releases on Cross Lake in 2013-2015 and weevil light trap captures during the same period.