Feral swine (Sus scrofa) are considered an invasive species and continue to cause damage to agronomic cropping systems and human infrastructure, such as levees, and pose a significant human health risk across the United States.

These pigs are not native to North America. Domestic pigs were introduced by Spanish explorer Hernando DeSoto’s expedition in the mid-1500s as a food source. This type of introduction continued through the 17th and 18th centuries by Spanish explorers. It wasn’t until the early 1900s that the first introduction of the Eurasian Wild Boar occurred in Hooper Bald, North Carolina, for sport hunting. This was followed by secondary introductions into South Carolina, Georgia, Florida, Mississippi, Tennessee, West Virginia and California. Escaped or released Eurasian stock eventually crossed with decedents of those introduced by explorers or escaped domestic pigs resulting in a Eurasian-feral hog hybrid, which is present today across much of the U.S.

Because of the wild pig’s adaptability, opportunistic eating habits and reproductive rate, the control of this invasive species has proven difficult. The gestation of the pig is 115 days, and feral sows typically farrow (give birth) to 1.5 litters of six piglets per year, beginning at around 13 months of age. Because of this reproductive rate, it has been estimated that 70 percent of the existing feral pig population would have to be removed to keep pig numbers at steady levels. However, the only methods legally available for population control today are hunting, trapping and snaring. Trapping uses a box or corral trap. Snaring involves use of a steel cable looped and attached to a tree in which the loop tightens as the hog passes through a confined space. All of these solutions have been shown to be short-term with little long-term effectiveness.

The use of poisons shows more promise than other methods for being more efficient, effective and economical on a large scale. Over a 30-year period, 18,000 pigs were removed from Santiago Island in the Pacific Ocean using hunting, poisoning, trapping and snaring. In one study these four control methods were compared. The researchers found that trapping and snaring were ineffective, shooting was moderately effective, and poisoning was the most effective. Poisoning was 11 times cheaper than shooting and 80 times cheaper than trapping. One concern with the use of poison is fear that nontarget animals are negatively affected. To that end, not only is there a need for a toxic bait, but also an efficient and accurate delivery system.

Researchers have long known that pigs are more susceptible to methemoglobin formers than most other domestic livestock and humans, but the vast majority of wildlife species have not been tested. A methemoglobin former causes changes in the structure of red blood cells, resulting in cells that can no longer carry oxygen, thus causing suffocation. Pigs are more sensitive than other animals to these substances because they have low levels of a specific enzyme that reverses the process of methemoglobin formation. This makes methemoglobin formers, such as sodium nitrite, an attractive choice for use in feral pig control.

Sodium nitrite is used as a preservative in human foods and as an antidote for cyanide poisoning. Research from Australia has determined that it does not pose a significant hazard to the environment. This is because it is highly water-soluble, which results in hydrolysis of the sodium nitrite into sodium, nitrous acid and hydroxide ions, which do not accumulate in the environment. The risk of secondary poisoning is, therefore, reduced or eliminated. Studies have shown that the half-life (amount of time for a compound to decrease to half of its original value) of sodium nitrite in pigs to be between 29 and 62 minutes, meaning degradation of the sodium nitrite occurs rapidly. Data from research trials have indicated that nitrite levels in thigh muscle, liver and small intestine samples collected between one and seven days post-death from pigs poisoned with sodium nitrite were less than 100 parts per million. This concentration is less than 200 parts per million, which is considered safe for human consumption, according to the Food and Drug Administration.

For determination of the lethal dose, wild-caught feral pigs were captured using commercial-type corral trapping systems in East and West Feliciana parishes. Feral pigs were then weighed and dosed with a known amount of sodium nitrite. The number of pigs that expired and the time from administration of sodium nitrite to death were recorded. Over the course of the study, concentrations from 0.00192 to 0.00336 ounces per pound were tested, and the LD90 (lethal dose required to kill 90 percent of the test population) was determined to be 0.00291 ounces per pound, or 182 parts per million, equating to a dose of 0.15 ounces to kill a 50-pound pig. Pigs died at all dose concentrations tested, with 25 percent of pigs dying at 0.00192 ounces per pound and 100 percent at 0.00336 ounces per pound. This indicates that there is some variation in the susceptibility of the wild pig population to the effects of sodium nitrite. However, there was no difference in time to death across all tested dosages with pigs succumbing at an average of 2.5 hours. Also, data showed that the sex and the weight of the pig had no influence on the success of the sodium nitrite to induce its toxic effects.

The second aim of the study was to determine an effective delivery medium, or a bait, that pigs prefer. LSU AgCenter researchers conducted preference trials introducing bait flavors to individual pigs. Using remote video cameras the researchers determined the preference of pigs to a pair of baits offered. As a pig approached the feed pan from any direction, both baits were equally available. Researchers analyzed the video to determine the amount of time each pig spent consuming each bait until one of the bait pairs was completely gone. The percentage of time the pig spent eating a particular bait was then analyzed to determine preference. In most cases the pig would consume all of one bait before starting on the other. Each pig was considered one trial and multiple trials on multiple pigs were conducted.

Because pigs readily consume whole-shelled corn, this food was used as a control to which all other baits were compared. Foods tested include white oak acorns, strawberries, marshmallows, peanut butter, fish meal, grape jelly and corn soaked in diesel fuel. In all cases, the pigs preferred corn. Comparison with fresh bass resulted in no preference. However, when bass was dehydrated, the pigs preferred it over corn in almost all cases. The pigs showed a similar preference for dehydrated pogie fish. Therefore, the LSU AgCenter prototype bait now utilizes dehydrated pogie fish.

Currently underway are trials comparing different encapsulation formulations to protect the sodium nitrite from the environment and the bait manufacturing process to prevent hydrolysis and to hide its taste. Sodium nitrite readily reacts with humidity and air to form other compounds not as potent as methemoglobin formers, resulting in a compound that is five times less effective. Because of the pig’s great sense of smell and taste, sodium nitrite is not readily consumed in its base form and must be “hidden” from the olfactory (smell) and gustatory (taste) systems. Early laboratory studies have shown that the LSU AgCenter’s encapsulation formulation shows promise. The next step will be to determine its effects on feral pigs, and this work is underway.

Concurrently, AgCenter researchers have developed a delivery system that will eliminate nontarget collateral damage with near real-time operator control, allowing delivery of baits to feral pigs only. Recently, researchers began testing a system that utilizes audio recognition to determine if pigs were present and opened feeding doors for the pigs to access. The system now works with visual recognition software that will ultimately recognize pigs and allow feeding while also recognizing bears, resulting in feeding doors closing and the system going into lockdown mode.

AgCenter researchers have also been testing a wild pig feeder developed in Florida that uses a different design to only feed pigs. This feeder utilizes a swing door that is unlocked by the weight of the pig and excludes bear via a grate fastened over the floor. The grate allows a pig’s hooves to reach the floor and unlock the door, whereas, the bear’s paw cannot reach the floor and is held up by the grate, thus not allowing access to the feeder.

There is no doubt that feral pigs pose significant threats to agriculture, native wildlife, civil infrastructure and human health. The LSU AgCenter will continue research efforts until a bait is approved for use on the landscape. With the sheer number of feral pigs across our nation, eradication may not be possible. However, the development of a toxic bait will add to the toolbox of measures to control and manage this invasive species.

Researchers at the Bob R. Jones-Idlewild Research Station in Clinton are conducting studies on feral hogs to determine the most efficient ways to control them using poisonous baits. Photo by Olivia McClure 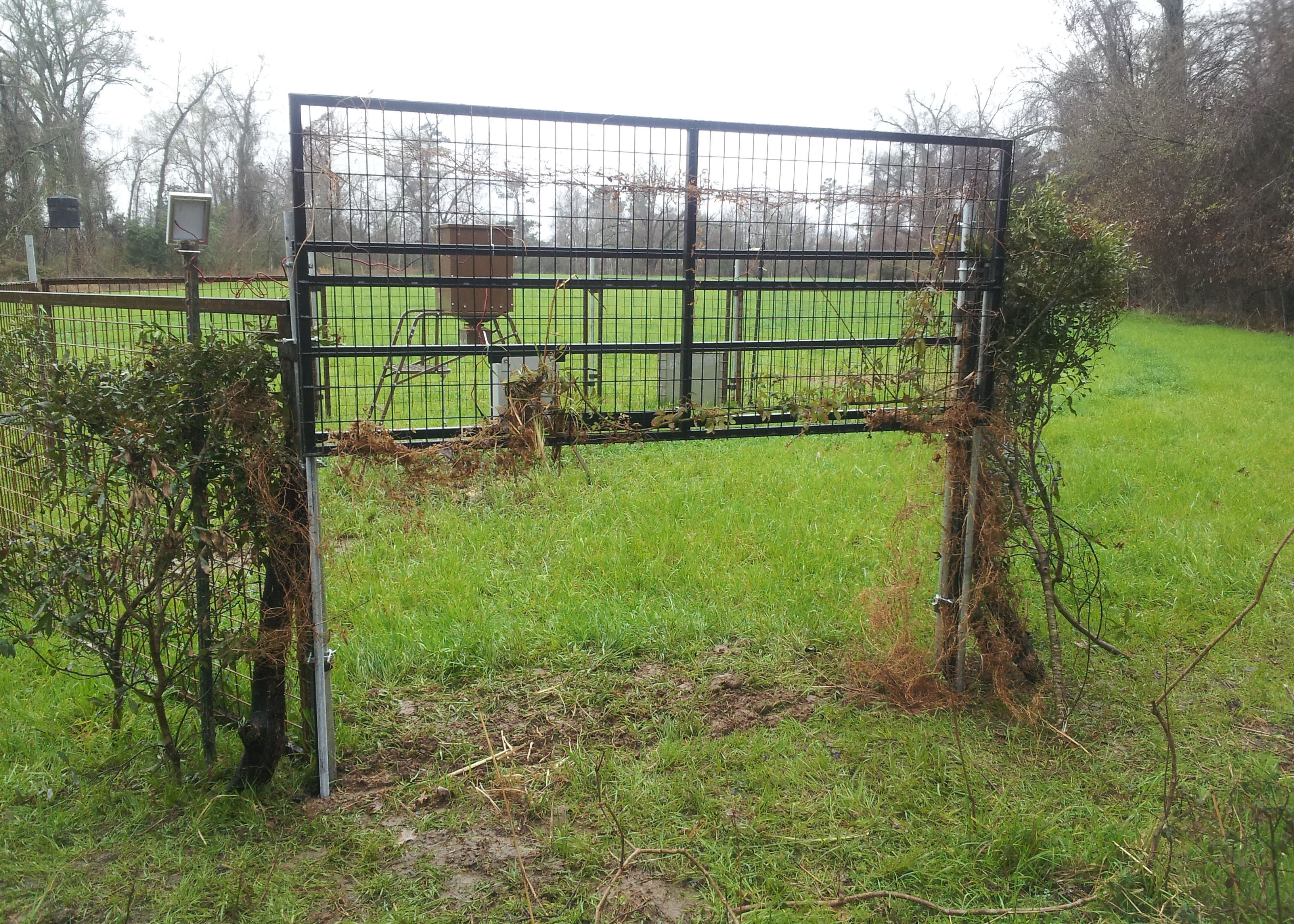