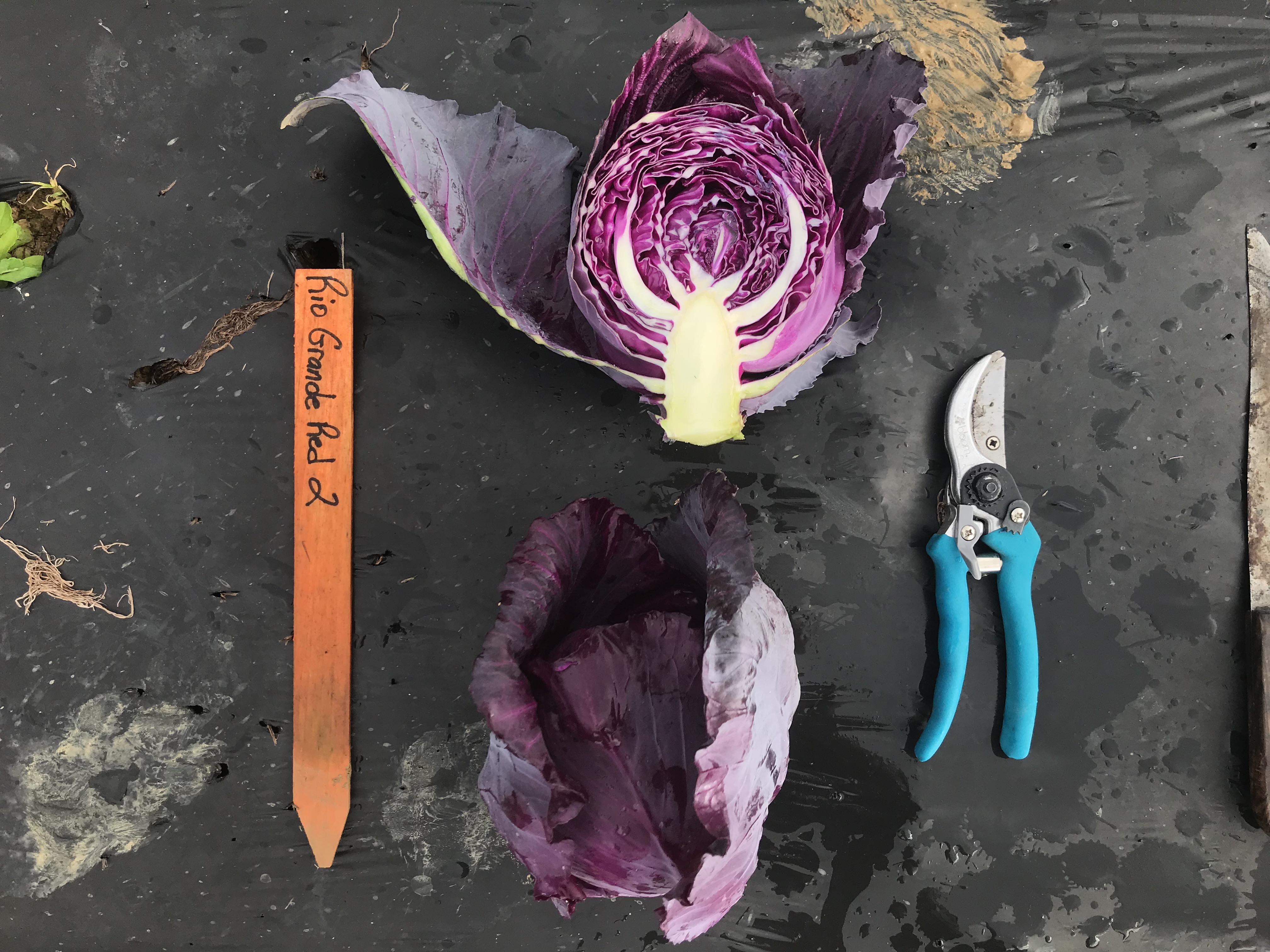 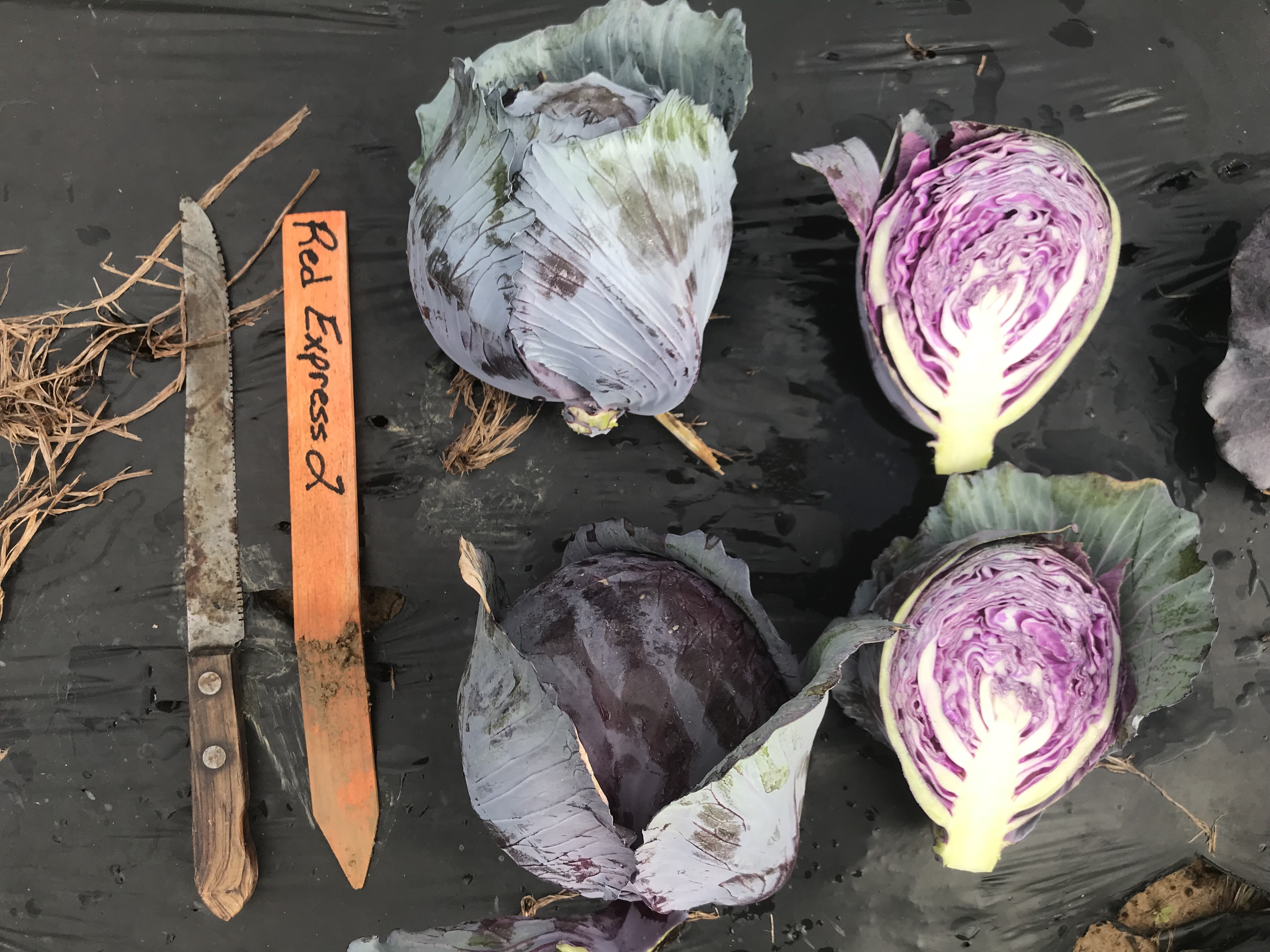 Cabbage (Brassica oleracea) is a popular cool weather vegetable sold mostly at fresh markets in Louisiana. Cabbage is grown on approximately 217 acres in Louisiana by 87 producers with a gross farm value of $1.3 million (Louisiana Ag Summary). Green cabbage has always been easy to grow, but red cabbage presents more of a challenge because the heads are very hard to size up. Some farmers claim if you add a fourth side dress application you’ll achieve bigger head size. The LSU AgCenter wanted to see if variety also played a role in size. The objective of this trial was to determine if a particular red cabbage variety yielded larger (weight) heads in Louisiana’s climate.

Seeds were planted into 50 count plug trays on July 18, 2017. Trays were fertilized 3 times prior to planting in the field with Peters’ 20-20-20 at a 200 ppm N rate. Cabbage was transplanted into the field on October 4, 2017. Plants were double drilled on 12 inch spacing with 20 plants per plot. Each plot (or variety) was replicated 3 times, with a total of 60 heads per variety. The trial location was in Husser, Louisiana. Because we were second cropping on plastic, preplant fertilizer at a rate of 500lbs/ acre (13-13-13) was applied punched through the plastic in the middle of the drills. All remaining fertilizer was applied through the drip irrigation. The cabbage plants survived 2 snow events throughout the growing season. Temperature fluctuated widely in the 2017-18 fall/early spring crop with highs in the low 90’s and lows in the mid-teens (°F).

Harvest occurred on three separate dates (December 20, 2017, January 9, 2018, and January 22, 2018) to ensure only firm heads were collected for data. Ten heads per plot were harvested for data. We selected average sized heads. Excess foliage was removed leaving 2 wrapper leaves attached to the head. Stem length was trimmed to ¼ inch in length and the weights (lb.) of individual heads were recorded.

Results from this study were somewhat disappointing. We believe some of the small head size was due to the inability to effectively incorporate the 13-13-13 as a preplant fertilizer.Therefore in the 2018-2019 planting year this trial will be replicated using 3 rates of fertilizer as a preplant (LSU AgCenter recommended rate of (500-600lbs 8-24-24 or 13-13-13 per acre preplant) , 1.5 times the recommended amount and 2 times the recommended amount. We will also side dress four times at 3 week intervals after planting at the recommended rate of (150lbs 34-0-0 per acre). Hopefully following a better fertilizer schedule and using specific varieties we can recommend a production protocol and varieties to help Louisiana gardeners and producers achieve larger red cabbage head size. At this time, we encourage gardeners to plant Rio Grande Red’, ‘Red Express’, ‘Ruby King’, ‘Scarlet King’, ‘Red Jewel’, ‘Red Dynasty’, and ‘Super Red 80’.