(08/29/18) BATON ROUGE, La. — Scientists at the LSU AgCenter Aquatic Germplasm and Genetic Resources Center are known for research to cryogenically preserve the genetics of zebrafish, and that research is evolving into engineering techniques to make the genetics more accessible to the biomedical arena.

AgCenter researcher Terry Tiersch and his colleagues recently received a $2 million National Institutes of Health grant to use 3D printers and other technologies to develop devices that address major problems in standardization.

“This will improve efficiency, output and quality. These devices will be engineered through microfabrication and 3-D printing to ensure that they are inexpensive, effective and available when possible through open-source file sharing,” he said. “This will provide a comprehensive standardized approach for cryopreservation that can enable routine participation by all members of the zebrafish research community.”

Tiersch is working with LSU AgCenter engineer Todd Monroe to develop instruments to improve the ability to ship and store genetic materials.

His work with two previous NIH grants involved cryopreservation, or the freezing of sperm from zebrafish to preserve the genetic resources of these fish, which are used in disease research.

This work provided a constant supply of genetic material for the Zebrafish International Resource Center in Eugene, Oregon, he said.

Tiersch and his colleagues provided ZIRC with technology tailored to their needs, which allowed freezing sperm of more than 30,000 research lines of fish.

The long-term goal of the project is to reliably and efficiently preserve genetic resources from aquatic model organisms that are vital to advancing biomedical research.

Instead of having to care for the fish, maintain tanks and pay labor costs, the processes that his group is working on will allow the genetic material to be stored in “straws” in nitrogen containers until it is needed.

“There are three specific aims of this research,” Tiersch said. “First, we developed micro-fabricated test systems second, we developed and tested 3D printed devices, and then we refined the design and function and improved reproducibility of quality assessment procedures.”

Tiersch said his team develops the technology, and ZIRC makes it available to the research community.

Zebrafish are a powerful biomedical model used around the world because they have the same basic genetics as humans but are cheaper and easier to work with than mice or monkeys, he said.

Hundreds of thousands of lines of research fish are available, and it is impossible to store and feed them all as live fish. Tiersch said more than 30,000 lines of zebrafish currently are at ZIRC alone.

“Some of these lines may hold the cures for cancer — but we can’t maintain them all as live fish. That’s why NIH wants to get them frozen,” Tiersch said.

Without cryopreservation, it would be nearly impossible to study the many lines, largely because each line would need more than one tank.

The technology is there to move forward with cryopreservation. But first, there has to be market development, safety measures put in place, ownership agreements signed and pricing worked out.

Work on these biomedical fish species is also directly transferable to farm-raised and imperiled species.

“We’re involved in improving or managing the genetics of fish and oysters to give benefits to the people who raise those animals: the fish farmers and oyster farmers,” Tiersch said.

A big problem with fish genetic research done in the past 50 years is that many studies have produced lots of data, but they have not been extended to the scale that would be useful to hatcheries and farmers who are unfamiliar with the new technology.

“Our approach has always been to get over technological barriers to make research useful to the end user,” he said.

Currently, fewer than 10 American companies are involved in this research, but Tiersch says there is wide interest in this type of research worldwide. That may be explained by the U.S. making up only three percent of the world’s production in aquaculture, he said. 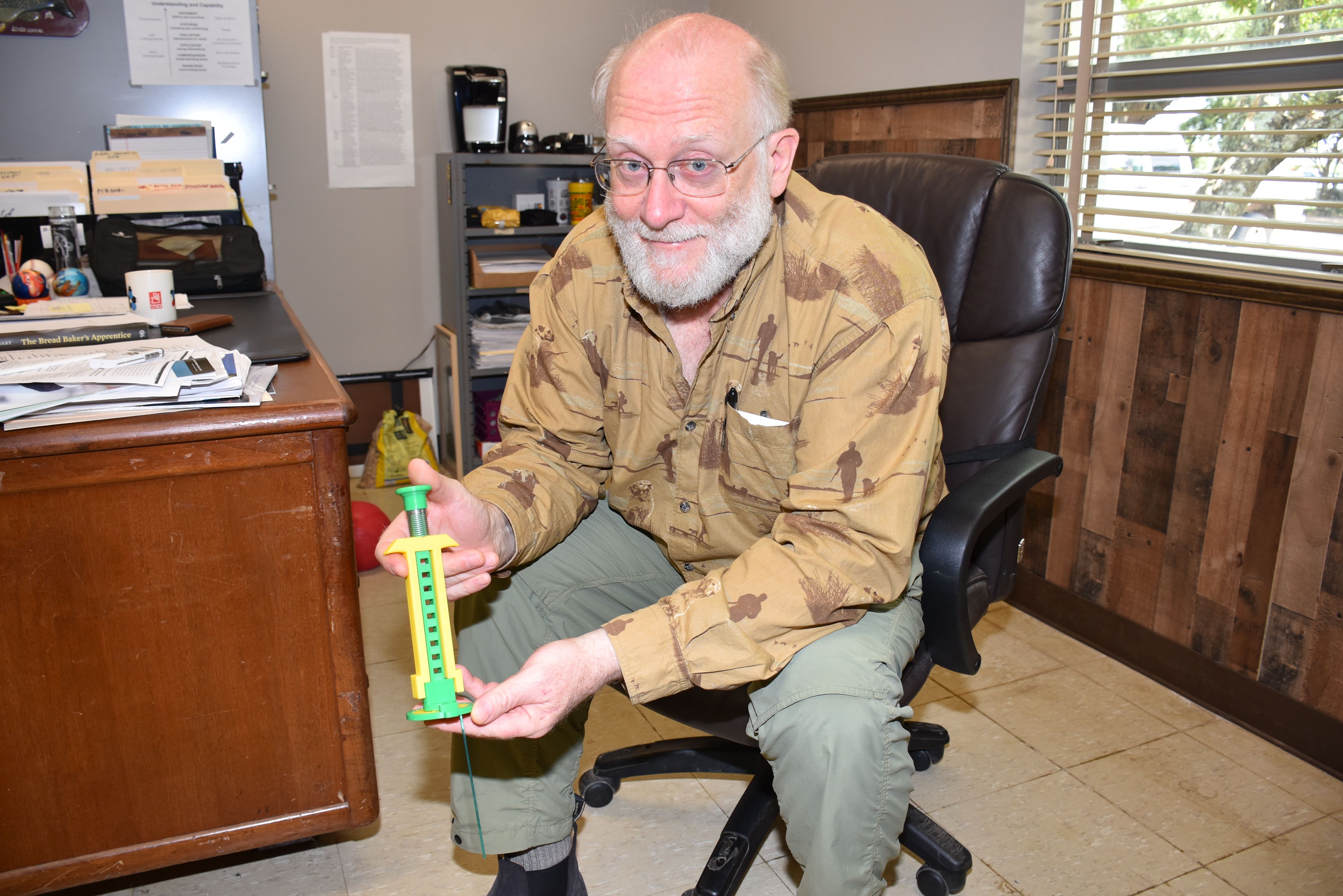 Terry Tiersch, aquatic researcher at the LSU AgCenter Aquatic Germplasm and Genetic Resources Center in Baton Rouge, displays the “Cajun Ejector” that was made on a 3D printer and is used to increase the efficiency of freezing and storing straws of genetic material in containers of nitrogen. Photo by Johnny Morgan/LSU AgCenter 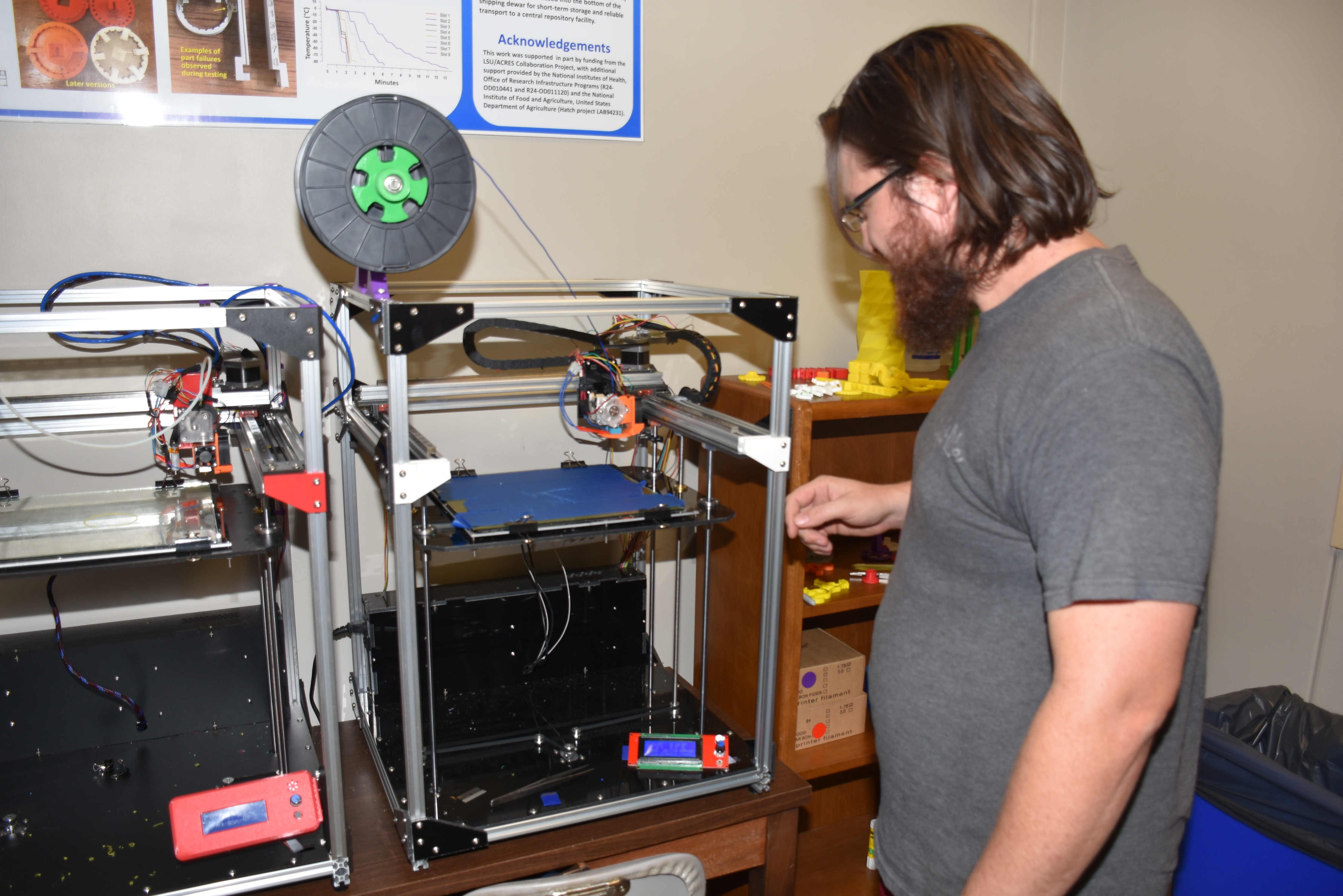