(02/12/18) RAYNE, La. — An invasive species of snail has forced a farmer in Acadia Parish to shut down his crawfish harvest on a 220-acre field.

The pest, called the apple snail, clogs crawfish trap openings and complicates crawfish harvesting. It has a big appetite for vegetation.

Dustin Harrell, LSU AgCenter rice specialist, said the farmer was collecting six to 12 crates full of the snails each day of harvest. The snails were blocking the crawfish traps and complicating the harvest so much that the farmer chose to pull his traps out of the field in late January.

Harrell said it’s suspected that the snails entered the field when it was flooded with water from a bayou that flows into the Mermentau River. He said flooding in 2016 probably pushed water out of the Mermentau where the snail has been found for several years.

“Ever since then, they moved and multiplied quickly,” he said.

Harrell said no chemical is labeled by the U.S. Environmental Protection Agency to kill the pest in Louisiana. He said he will bring up the problem next week when he visits federal officials in Washington, D.C.

Harrell said the snail poses a threat to small rice plants, although drill-seeded rice with a delayed flood may not be as susceptible to damage.

Mark Shirley, AgCenter fisheries agent, said the snails have been found in Bayou Vermilion for the past two to three years.

“We’ve been seeing more and more of them in the past few years,” he said.

Shirley said the snails eat the vegetation that crawfish use for food, and they could also eat rice plants.

Because they are an invasive species, it is illegal to collect, sell or transport them, he said.

Jacoby Carter, a research ecologist with the U.S. Geological Survey in Lafayette who has been studying the snails, said the mollusks can be controlled with a pesticide but it’s likely the compound would kill crawfish also.

He said one means of control is to drown egg masses, a pink cluster found a few inches out of the water. He said it takes 11 to 21 days for the eggs to hatch.

He said the snails can carry a fatal disease, rat lungworm, but it has only been found in snails near New Orleans.

He said a land manager found them in St. Mary Parish where they seemed to be controlling salvinia, an invasive plant species.

He said it’s suspected that aquarium owners got rid of the snails.

“They’re not good for aquariums because they eat the vegetation,” he said.

Two birds that feed on apple snails, the limpkin and the snail kite, move as the snail’s range expands, he said. 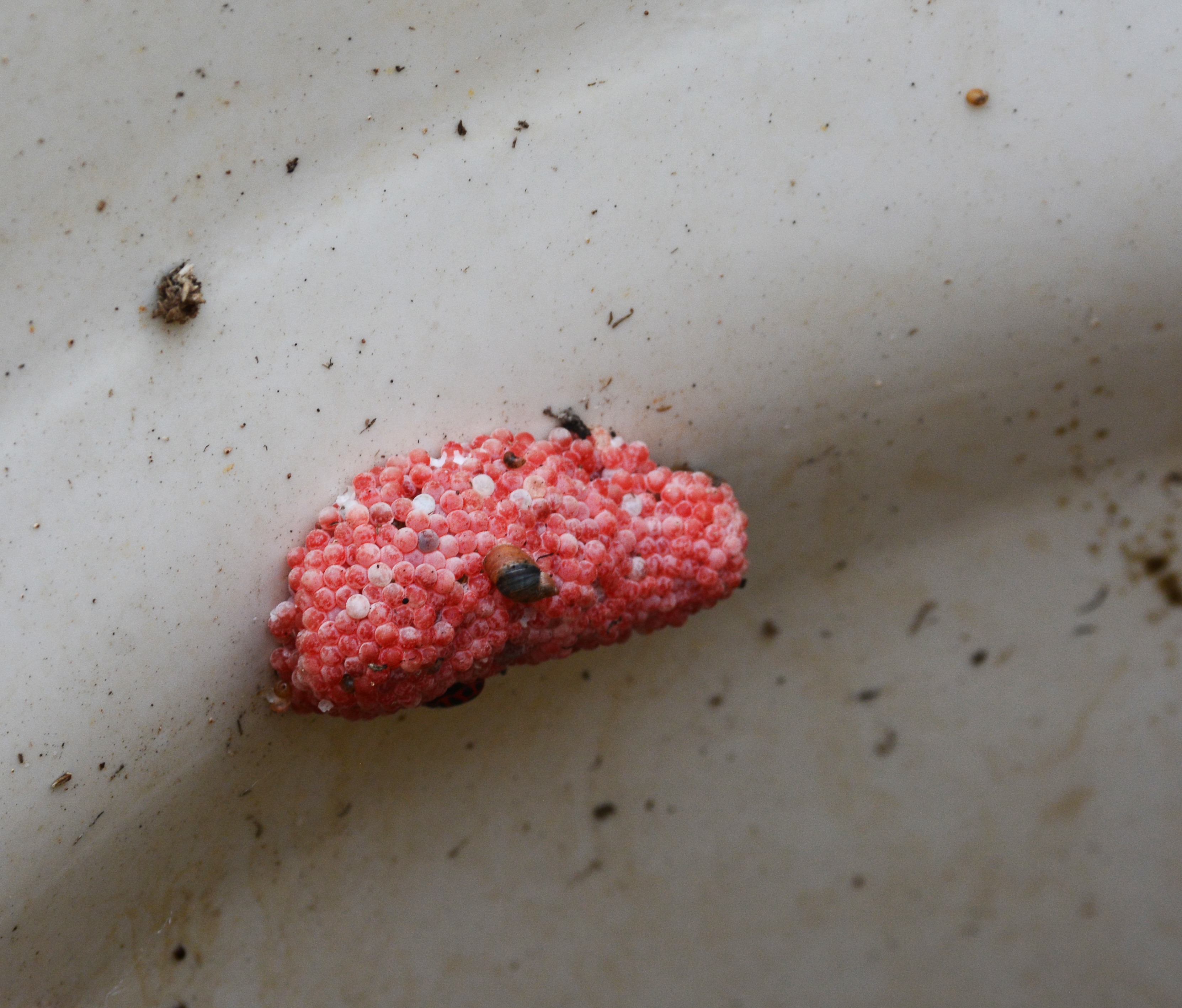 An egg mass of the apple snail on a drainage pipe in a crawfish pond. (Photo by Dustin Harrell/LSU AgCenter)

An apple snail from a crawfish pond near Rayne. (Photo by Dustin Harrell/LSU AgCenter)