Nematodes associated with cotton in Louisiana

Stunting, yellowing, and early plant death from the southern root-knot nematode in cotton.

Plant-parasitic nematodes are some of the most important pests that cotton producers have to deal with every year. These nematodes are found throughout the state and are present in most fields. Although there are many different types of nematodes present in our state, the reniform and southern root-knot cause the most problems to cotton production. Surveys have shown that about 50% of cotton fields are infested with the reniform nematode and 25% with southern root-knot.

The southern root-knot nematode has historically been recognized as a long time pest of cotton. This nematode can be readily identified since it produces fairly distinctive galls on the roots of plants. This nematode is particularly damaging by itself but when combined with the Fusarium wilt organism can cause severe damage. It does seem to favor sandy soils and can cause serious damage to plants. Typical symptoms to the plants include stunting, loss of vigor, early wilting during drought and poor yield. Plants may also grow fairly normally if the levels of the nematode are low at the time of planting but because of buildup of this pest during the growing season, may cause early or premature death of the plants closer to harvest time.

Reniform nematode has rapidly developed into an important nematode in cotton production. It has progressed from a relatively minor pest 30 years ago to an extremely important pest in many states including Alabama, Arkansas, Georgia, Louisiana, Mississippi and Tennessee. Reniform nematode seems to spread readily since this nematode is very resistant to drying conditions and can move around by any means that can move soil whether it is tractors or flooding. Reniform nematode is not very selective about soils that it inhabits but does seem to favor silt loams. It can occur in very light to heavy soils but causes the greatest damage in coarse-textured sandy or silt loams. Reniform nematode causes symptoms are similar to that of root-knot nematode but may be expressed over wide areas within a field which can sometimes make it difficult to even recognize.

Lesion nematodes are fairly common throughout most of Louisiana, attacking many of the different crops grown here. These nematodes are endoparasitic, meaning that they feed inside root tissue. High numbers of this nematode cause lesions (necrotic root tissue) on roots, with severe damage causing girdling. Poor growth and yellowing are common above-ground symptoms associated with this nematode. Some species of lesion seem to like grass crops such as corn or milo best and are likely to show up after a year in either of these crops.

Stubby-root nematodes are not quite as common as some of the other nematode types but occasionally show up in cotton fields. This nematode is a root ectoparasite, primarily feeding on root tips. This feeding can cause the root tips to cease growing and reduce the overall development of the root system. The name stubby-root comes from the appearance of plants that have been severely damaged by this pest. Because of the feeding site preference of this nematode, relatively few nematodes can cause serious injury. Above-ground symptoms of this nematode include reduced growth and increased sensitivity to drought.

Lance nematodes are common nematode pests of cotton throughout most of Louisiana. Like many nematodes, it has a wide host range including cotton, soybeans, grass crops, and many trees. It is considered an endoparasite on cotton and cause considerable damage to cortex and vascular root tissue. Compared to most of the other nematodes that attack cotton, lance nematode would be considered very large (several times larger than a nematode such as reniform). Stunting of cotton followed by chlorosis are common symptoms observed in the field. Defoliation of cotton has also been reported by this nematode during severe drought.

Spiral nematodes are extremely common pests of cotton probably being found in more fields than any other nematode. However, most of the time levels are fairly low and don’t cause any problems. Occasionally, population levels reach very high levels where some damage is likely to occur on cotton. These nematodes are partially or fully embedded in roots where they feed on cortical cells. Small lesions are common on roots around these feeding sites. Damage by this nematode is usually minor and requires a considerable population to cause appreciable injury. Like most other nematodes, drought plays an important role in the damage potential by this nematode.

Dagger nematodes are infrequent pests of cotton in Louisiana. These nematodes attack a wide range of plants including soybeans, corn, milo, turfgrasses, vegetables, and ornamentals. These are large nematodes which feed on root tips. Information on their association with cotton is fairly limited. Since very little is known about the damage potential to cotton, treatment is generally not recommended.

Mid-season damage to cotton from the reniform nematode.

Crop rotation has been a major factor in changing the nematode situation for many producers. Declining cotton acreage in many areas of the mid-South has allowed extensive rotation that was not present just a few years ago. Corn has become a much more widely grown crop along with soybeans. Corn is effective in reducing reniform nematode. Soybean is more variable since varieties can range from very susceptible to very resistant against either reniform or root-knot nematode. A big concern now is that many acres of soybean are being planted in fields which had previously been planted in cotton that supported large numbers of reniform nematode.

Nematicides have certainly changed in the past 10 years. Temik 15G was the standard chemical that was used for many years. Temik is no longer available. Seed treatment nematicides have recently become the dominant chemicals used by producers. They can certainly be helpful but cannot stand up to serious pressure from nematodes especially in soils that are prone to severe damage. Avicta Complete Cotton and Aeris Seed Applied Insecticide/Nematicide use either Abamectin or Thiodicarb to control nematodes. Poncho/Votivo is a biological product that protects plant roots using a Bacillus bacterium. Velum Total is a combination of a nematicide and an insecticide.

Fumigant nematicides such as Telone are another option for production fields with serious nematode problems. Although the chemicals we are still using were developed in the 1940’s and 1950’s, the method of application has certainly changed. Rather than treating entire fields with the fumigant, a more site-specific method is currently being used by producers. The use of apparent electrical conductivity (ECa) that is generated from soil sensing devices such as used from Veris Technologies is now widely used to detect differences in soil texture within a field. These differences in soil texture can be used to predict where nematode problems are likely to occur. Damage is usually greater in coarse-textured soils and especially those which have this texture through the soil profile. When combined with some soil samples to establish nematode types and levels, these differences in soil texture can be used to make effective management zones across the field. Nematicide application equipment that is used for these fumigants can use these maps and apply a nematicide only in the areas of a field where you need them. 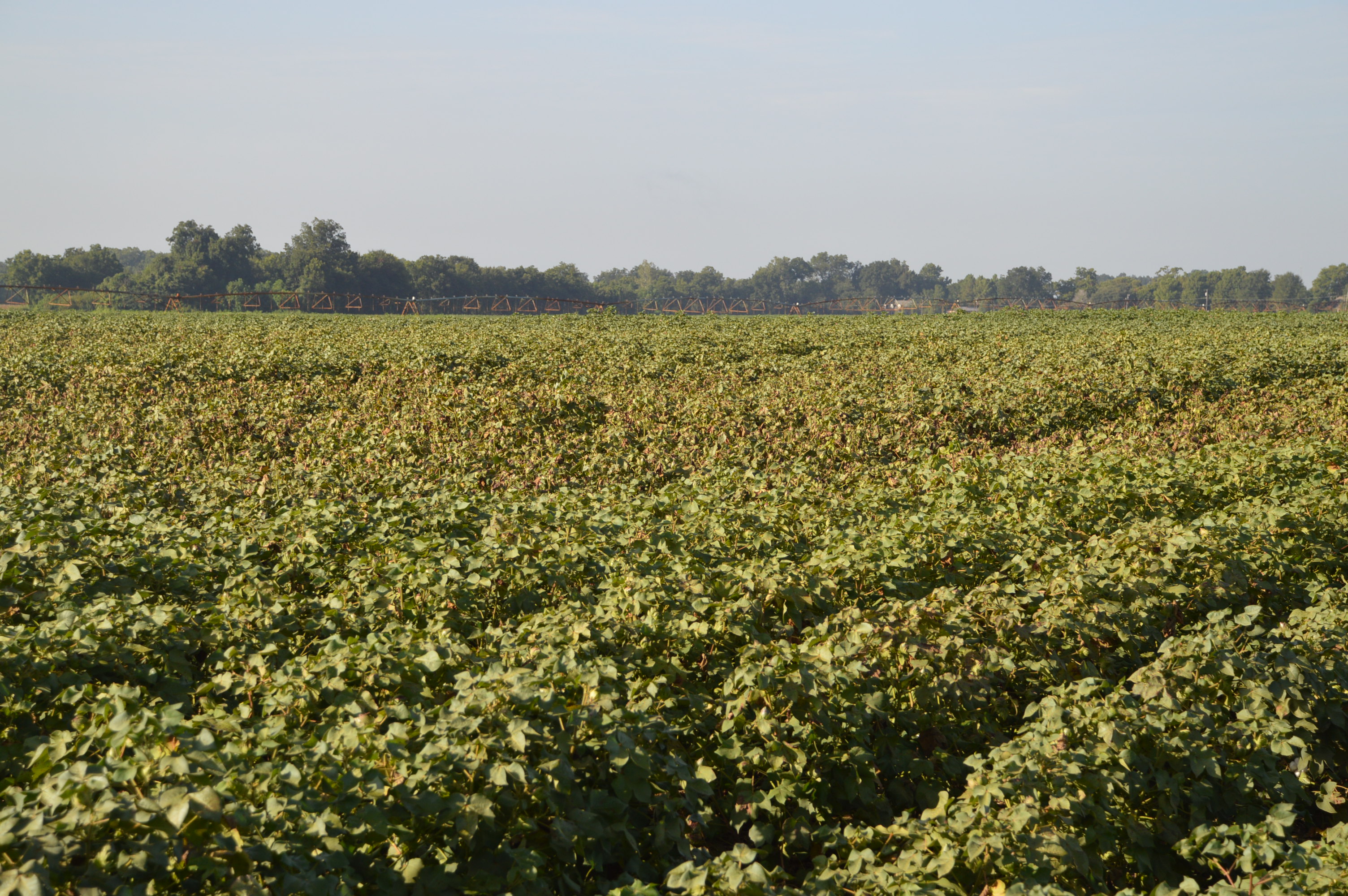 Late season damage to cotton from the southern root-knot nematode. Plants are beginning to die early in the field.

Cotton varieties have certainly changed drastically in the last twenty-five years. Until very recently, most varieties were considered to be very susceptible to both root-knot and reniform nematodes. A few varieties like Stoneville 887 had some moderate levels of root-knot resistance back in the 1990’s. More recent varieties such as Stoneville 4946GLB2, Deltapine 1454NR B2RF, and Deltapine 1558NR B2RF have been reported with good resistance to the common root-knot nematode.

Currently, there are no varieties released with reniform resistance. Since germplasm such as Lonren, Barbren, M713, and MT2468 have been released, resistant varieties are likely to be developed and released in the near future. A few varieties appear to have some tolerance against this nematode possibly due to breeders selecting high yielding lines adapted for the midsouth. Tolerance can best be described as sustaining the effects of the nematode without suffering serious injury or loss of yield. Unfortunately, tolerance allows high levels of nematodes to build up that may be very damaging to the next crop.

Serious damage to cotton by reniform nematode at the end of the growing season. Extremely small plants with only a few bolls.

There are some cultural practices that may help out with nematode problems. Irrigation was not nearly as common for most of the midsouth in the past but has become increasingly more widespread. Irrigated cotton is not as likely to be as severely damaged from nematodes as dry land cotton would be. Fertility is important to cotton production with adequate nutrients being needed to provide high yields. Some of our work at Louisiana has shown that increasing nitrogen rates increased yields when used in conjunction with the fumigant Telone but didn’t when the Telone was absent. Deep tillage or subsoiling has also been found to be especially beneficial against root-knot nematode. Deep tillage allows adequate tap root development especially in soils that may have shallow hardpans. Galling from root-knot on cotton roots has been reported to be less in strip tillage compared to conventional tillage. Cropping patterns are much more likely to influence nematode populations and ultimately tthe damage potential from nematodes than tillage practices.