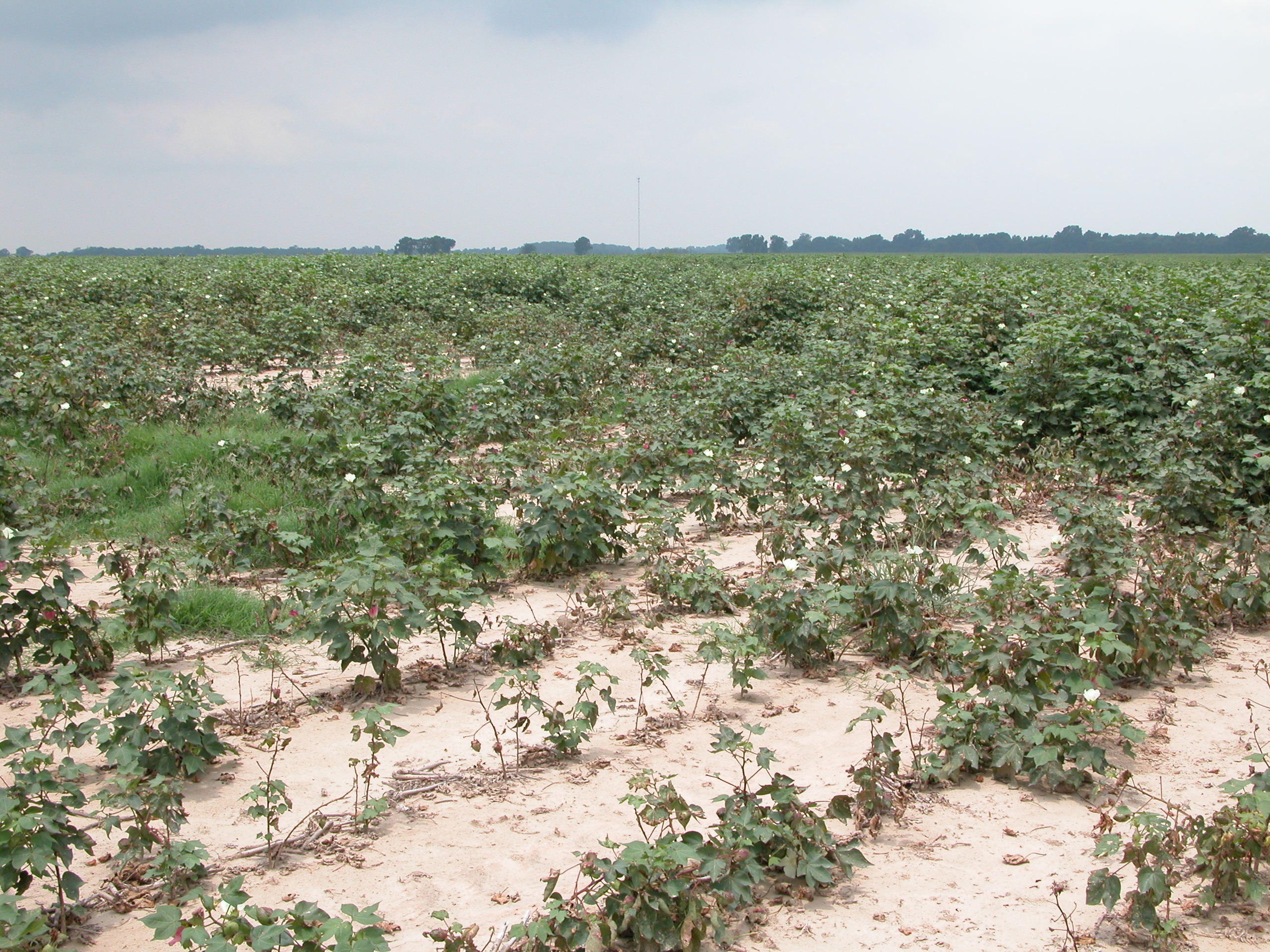 Nematodes have been a major problem in cotton production for many years in Louisiana. Losses from these pests cost our producers millions of dollars each year. Nematodes are present in the soil and are often overlooked by producers. The damage is often blamed on something else such as fertility, wet or dry spots, insects, or diseases. The damage may be visible on young cotton when populations of the nematode are high at planting but may show up anytime during the growing season as populations develop

Galling on young cotton roots from the Southern root-knot nematode.

Early season damage from high levels of the reniform nematode.

Egg masses and a single white female visible on a cotton root. Notice the sand particles attached to the egg masses.

The most common symptoms in cotton would include stunting, yellowing, and wilting of above-ground plants. The plants may be very irregular in plant height across a field or within certain areas. Premature death may occur late in the season resulting in cotton maturing at different times within a field. The root-knot nematode produces galls that are clearly visible on the roots making this nematode easily identifiable. Galling can be visible as early as 30-40 days after planting but may be detected anytime during the growing season. Yield is impacted by nematodes and can range from very slight to 40-50% losses or more in parts of a field.

Most nematodes are not uniformly distributed within a field. Root-knot nematode tends to occur in patches or irregular areas within a field. The reniform nematode may be more widely spread, occurring throughout a field, but not necessarily causing losses in all locations. Soils that are coarse-textured such as sandy loams or some silt loams are usually where the greatest damage occurs from these pests. As the soil types start having larger amounts of clay such as silty clay loams or clay loams, the potential for nematode damage greatly decreases.

There are two major nematode pests of cotton in Louisiana. The Southern root-knot nematode has been around as long as cotton has been grown in our state. It was recognized as a pest over 100 years ago. This nematode can be identified in the field since it produces galls on the root system of cotton plants. Galls are nothing more than a swelling of the root system associated with the feeding of the nematode inside the root. The root-knot nematode attacks a wide range of host plants and can often be found to be a problem on cotton even after rotation with most of the other crops that are grown in our state.

Reniform nematode has become the most important nematode of cotton. Although it is considered to be an invasive species, it has rapidly spread across our state to infest a high percentage of our fields. Reniform nematode doesn’t appear to be as restricted to soil texture as root-knot nematode and can be found across a range of soil types. Populations of this nematode can reach very high levels in some the fine-textured soils such as the silt loams. Although populations may not be as high in the more sandy soils, damage may actually be greater in these soils. Reniform nematode can spread rapidly in a field and appear so uniform that it is difficult to recognize how much damage is actually occurring because everything is stunted.

Galling produced by root-knot nematode is very distinctive and easy to recognize by producers. Take a shovel and carefully dig up plants to examine the root systems. There is nothing else that causes these types of symptoms in cotton. Reniform nematode doesn’t produce anything that is easily recognized. An irregular pattern in plant height is one symptom that may suggest this is reniform nematode. The egg masses of reniform nematode may have a considerable amount of sand particles stuck to them, leaving small roots with a grainy or rough appearance. Soil sampling is still one of the best methods to determine the types and population levels that are present in a field. Routine identification should be collected in late summer or early fall. Soil cores should be collected to a depth of six to eight inches from 15-20 sites in the area that you are collecting from. The soil should not be either excessively wet or dry at the time collected. Once collected, keep the samples cool (room temperature) until they can be sent to the Nematode Advisory Service. Follow the instructions for shipping and correct paperwork with each sample.

Crop rotation is a great method of reducing some nematode problems in cotton. However, the Southern root-knot nematode has proven to be a difficult nematode to manage since most of the crops that are produced in Louisiana are considered susceptible. Corn is often grown in rotation with either cotton or soybeans but can still support large populations of the root-knot nematode. Rotation is particularly effective against the reniform nematode since corn is essentially a non-host for this nematode. A one or two year rotation with corn can really decrease levels of this nematode. Cotton producers should be sure to treat problem fields with a nematicide. Fumigants should be used if the problem is considered severe but should be applied in a site-specific manner. Site-specific technology can be used to treat only the parts of the field that needs treating with the right level of nematicide. Seed treatment nematicides should be used when populations are considered low to moderate. The greatest problems with this nematode tend to occur when cotton is grown continuously for more than one year.