Nematodes in the Home Garden 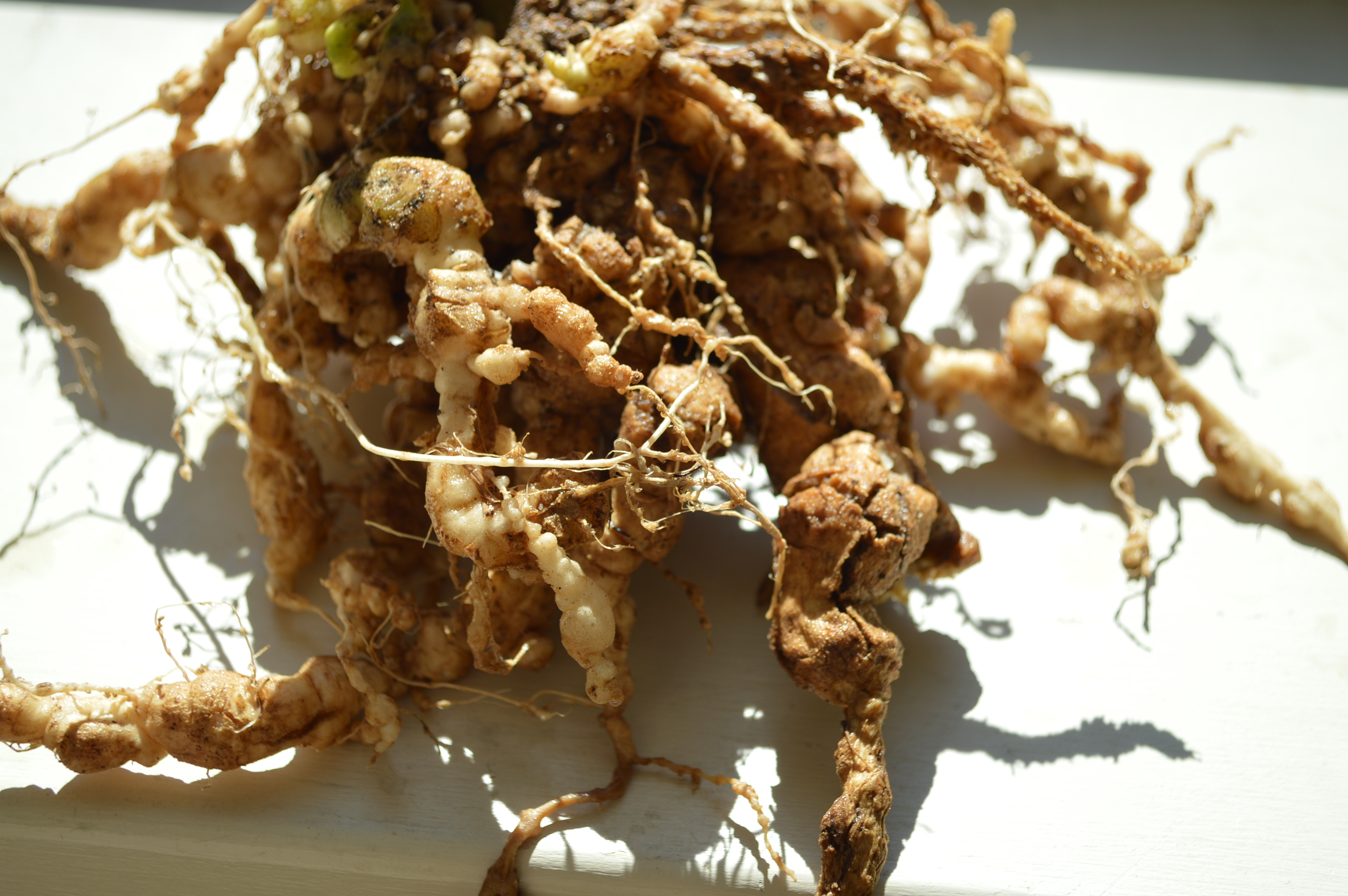 There are quite a number of plant-parasitic nematodes that can be found in the typical garden. Most of the time there appears to be only two species that really cause damage to a number of different vegetables. These two nematode species are referred to as the Southern root-knot nematode and reniform nematode. Both are widespread and found throughout the state.

The southern root-knot nematode is a sub-tropical or tropical nematode found throughout the warmer areas of the world. Root-knot nematode likes warm conditions so is not active in the soil until soil temperatures warm up to 65°F. Likewise in the fall these nematodes are no longer very active once temperatures drop back down to this level. This leaves a 5-6 month period that these pests are active in our state. Since each female lays hundreds of eggs and a generation may be only 25-30 days, large populations can develop quickly in the soil. Root-knot nematode seems to favor soils that are sandy. However, they can be introduced on contaminated equipment or infected transplants and survive fairly well on all but very heavy soils.

The reniform nematode is also considered to be a sub-tropical or tropical nematode and is also found in many countries around the world. This pest doesn’t like cold weather either and is not active when soil temperatures are below 60°F. It has a very fast life cycle that may be only 18-20 days and often builds up to extremely high levels in the soil. Reniform seems to do slightly better in soils that have more loamy but can very well in sandy to fairly heavy clay soils. This nematode is very tough and is much more difficult to reduce populations by some of the normal practices that are used on root-knot such as tilling to dry out the soil or fallowing.

Both of these two nematodes live in the soil and impact the roots of plants. Most of the damage that is visible above ground is the result of damage that was previously caused to the root system. Root-knot nematode produces a very distinctive symptom on the roots (galling) that makes it easy to recognize. Galls can range in size from being just barely visible on crops such as corn to extremely large as found on butterbeans, okra, or tomatoes. The size of the gall may also be an indication of the number of nematodes present. Large galls have a lot more nematodes present in them than small galls which may have only one or two. The amount of galling that is present may also give you an indication of just how serious a problem exists. Plants with only a few galls may function almost normally and little damage may be visible. Large numbers of galls on the roots of plants can be a good indication that a major problem is present. Ideally, the best thing to do is observe the roots of plants after they are finished producing and look for the presence of galls. A few galls may mean that a problem is building and corrective action should be taken. Severe galling means that future plantings in this location are likely to be seriously damaged and corrective action is necessary. Galling disrupts the flow of water and nutrients in a plant and really expresses damage during dry periods. Increasing available water and nutrients has been one of the management strategies for many years. Plants above-ground may be stunted, wilt early, yield poorly, or die prematurely. When you discover plants that fit any of these foliar symptoms, you need to be sure to check out the root system to look for visible galling.

Reniform nematode is much more subtle than the root-knot nematode and can easily be misidentified. It doesn’t produce any distinctive symptoms on the roots. The large numbers that attack the roots weaken them and slow down growth and fruiting potential of many vegetables. Fortunately, fewer vegetables are attacked by reniform than the Southern root-knot. This makes it a lot easier to develop rotational plans for management. Above-ground symptoms are usually stunting and reduced yield.

Damage by nematodes usually only occurs when high numbers of the nematode are present at the time of planting. Nematode populations have ups and downs each year depending on past crops, growing conditions, winter survival, predators, and parasites. In years where large numbers of these pests survive, damage can be severe on many crops. Once established in a garden, these pests are likely to appear on spring, summer, or fall vegetables.

Just about every type of vegetable that we plant in our gardens can be attacked by root-knot nematode. Those planted and growing during the hot summer months such as tomatoes, okra, butterbeans, squash, cucumbers, and melons are generally some of the most severely damaged. Since the damage is done to the roots of these plants, all most people ever see is that the plants are stunted, wilt easily during dry weather, yield poorly, and die prematurely.

Management of root-knot nematode in the garden

Currently, there are not any nematicides available to use in the home garden. Crop rotation and resistant varieties can reduce losses by this pest. Some garden crops have fewer problems with root-knot nematode such as mustard, turnips, corn, strawberry, and peanut and can be used in rotation with more susceptible types. Most of the other crops grown in the garden are fairly susceptible. Okra, tomato, butter beans, melons, squash, peppers, and eggplant can be severely damaged and need to be rotated within the garden behind a more resistant crop. Tomato and southern peas have resistant varieties against root-knot nematode and perform well in areas where this pest is present. Solarization during the summer with clear plastic or using a cover crop of marigolds or resistant southern peas could also reduce the populations of this nematode. Adding organic matter such as compost or leaves may offset some damage by improving growing conditions for vegetables.