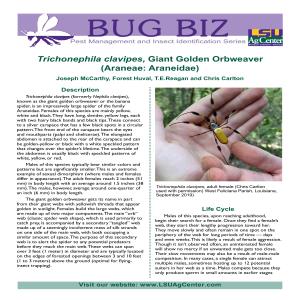 Trichonephila clavipes (formerly Nephila clavipes), known as the giant golden orbweaver or the banana spider, is an impressively large spider of the family Araneidae. Females of this species are mainly yellow, white and black. They have long, slender, yellow legs, each with two hairy black bands and black tips. These connect to a silver carapace that has a few black spots in a circular pattern. The front end of the carapace bears the eyes and mouthparts (palpi and chelicerae). The elongated abdomen is attached to the rear of the carapace and can be golden-yellow or black with a white speckled pattern that changes over the spider’s lifetime. The underside of the abdomen is usually black with speckled patterns of white, yellow, or red.

Males of this species typically bear similar colors and patterns but are significantly smaller. This is an extreme example of sexual dimorphism (where males and females differ in appearance). The adult females reach 2 inches (51 mm) in body length with an average around 1.5 inches (38 mm). The males, however, average around one-quarter of an inch (6 mm) in body length.

The giant golden orbweaver gets its name in part from their giant webs with yellowish threads that appear golden in sunlight. Females build the large webs, which are made up of two major components. The main “orb” web (classic spider web shape), which is used primarily to catch prey, is accompanied by a secondary “tangled” web made up of a seemingly incoherent mess of silk strands on one side of the main web, with both occupying a similar amount of space. The purpose of this secondary web is to alert the spider to any potential predators before they reach the main web. These webs can span over 3 feet (1 meter) in diameter and are typically located on the edges of forested openings between 3 and 10 feet (1 to 3 meters) above the ground (optimal for flying-insect trapping).

Males of this species, upon reaching adulthood, begin their search for a female. Once they find a female’s web, they start their lengthy progression toward her. They move slowly and often remain in one spot on the periphery of the web for long periods of time — days and even weeks. This is likely a result of female aggression. Though it isn’t observed often, an uninterested female will show no mercy if an unwanted male gets too close. Their slow movements may also be a result of male-male competition. In many cases, a single female can attract multiple males, sometimes hosting up to 12 potential suiters in her web as a time. Males compete because they only produce sperm in small amounts in earlier stages of their life, meaning that each mating opportunity is crucially important. Stronger males typically go for large, virgin females to increase the chance of their sperm being used. Smaller males, having less of a chance against the stronger ones, typically go for smaller females or females that have already mated.

After mating, the females produce two or more egg sacs that contain hundreds of eggs. Once they hatch, the spiderlings will go off and create their own webs and start catching food. Their exact life cycle has not been described in detail, but close relatives of this species go through six to eight molts before reaching adulthood, so this is likely the case for T. clavipes. Adults of this species can be seen in late summer into fall. They are active as early as July into September and October.

This species almost never bites humans. Bites only occur when they are handled roughly. Even then, bites are rare, and their venom is less severe than that of a bee sting. They typically only inhabit wooded areas, so they are unlikely to be found in or around homes and are, therefore, not considered a pest. They will sometimes build their webs in close proximity to other webs, causing groups of up to 10 large webs, but these are along the edges of forested areas/clearing and are easily avoidable.

No control methods for this species are recommended, as they are not a pest. If a web is found, it is best to leave it alone as the spider spent energy and time making it. Their webs are semipermanent, meaning they stay in the same web for up to a few weeks. Most other orbweavers spin temporary webs, moving weekly, daily or hourly. If you happen to walk through a web and a spider falls on you, gently brush it off, and it will spin a new web or repair the damaged one. 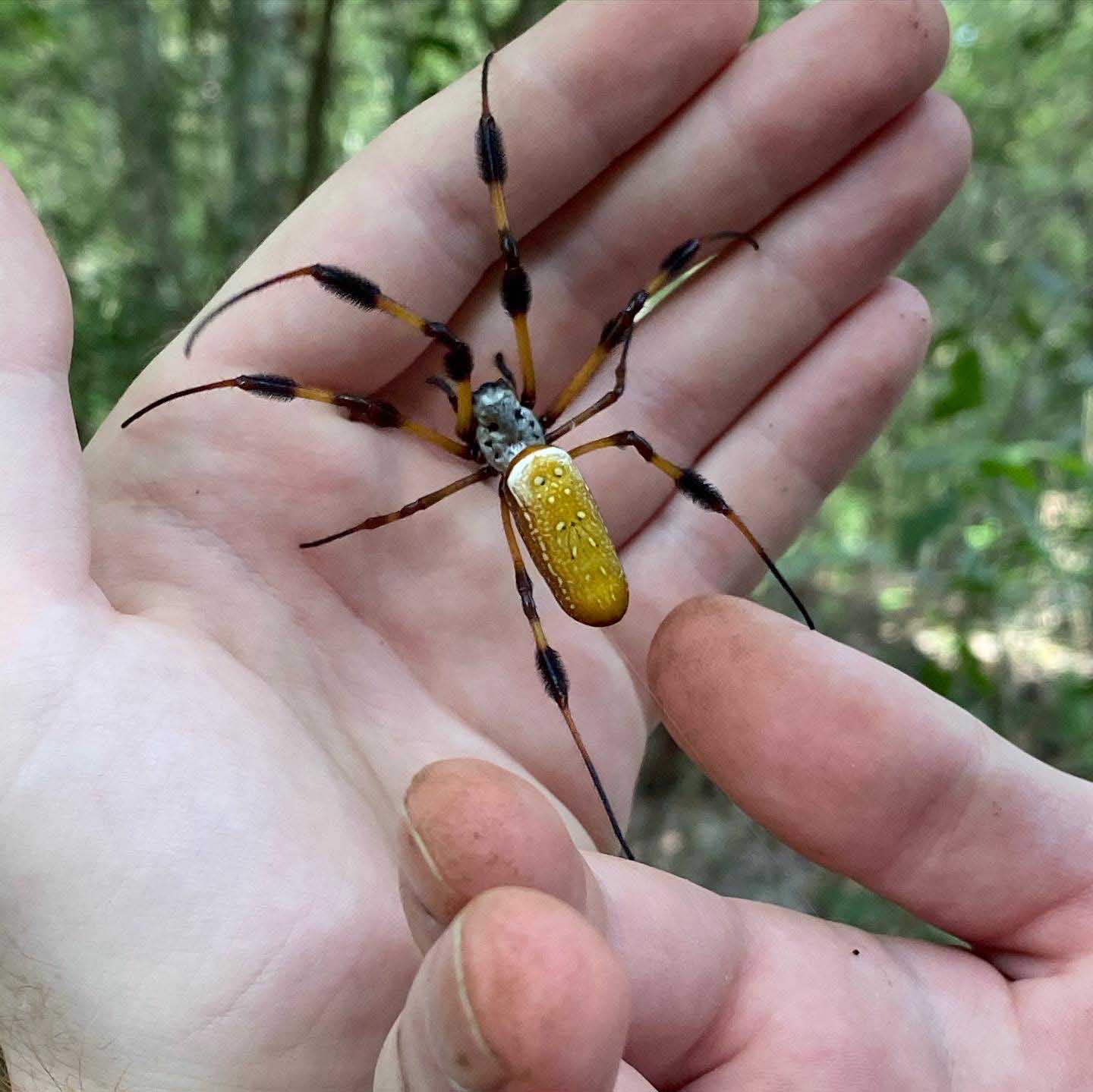