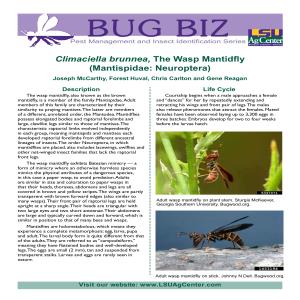 The wasp mantidfly, also known as the brown mantidfly, is a member of the family Mantispidae. Adult members of this family are characterized by their similarity to praying mantises. The latter are members of a different, unrelated order, the Mantodea. Mantidflies possess elongated bodies and raptorial forelimbs and large, clawlike legs similar to those of mantises. The characteristic raptorial limbs evolved independently in each group, meaning mantispids and mantises each developed raptorial forelimbs from different ancestral lineages of insects. The order Neuroptera, in which mantidflies are placed, also includes lacewings, owlflies and other net-winged insect families that lack the raptorial front legs.

The wasp mantidfly exhibits Batesian mimicry — a form of mimicry where an otherwise harmless species mimics the physical attributes of a dangerous species, in this case a paper wasp, to avoid predation. Adults are similar in size and coloration to paper wasps in that their heads, thoraxes, abdomens and legs are all covered in brown and yellow stripes. The wings are partly transparent with brown forward edges (also similar to many wasps). Their front pair of raptorial legs are held upright at a sharp angle. Their heads are triangular with two large eyes and two short antennae. Their abdomens are large and typically curved down and forward, which is similar in position to that of many bees and wasps.

Mantisflies are holometabolous, which means they experience a complete metamorphosis: egg, larva, pupa and adult. The larval body form is quite different from that of the adults. They are referred to as “campodeiform,” meaning they have flattened bodies and well-developed legs. The eggs are small (2 mm), tan and suspended from transparent stalks. Larvae and eggs are rarely seen in nature.

Courtship begins when a male approaches a female and “dances” for her by repeatedly extending and retracting his wings and front pair of legs. The males also release pheromones that attract the females. Mated females have been observed laying up to 3,300 eggs in three batches. Embryos develop for two to four weeks before the larvae hatch.

Larvae of this species are parasites of spider egg sacs. Freshly hatched larvae make their way from their eggs to the ground, where they wait for spiders. The larvae rear up onto the narrow ends of their abdomens and stretch their legs out, waiting to grab passing spiders. Larvae ride female spiders until they deposit their eggs. Larvae that board male spiders transfer to females during copulation. The larvae feed on the hemolymph (“blood”) of the spiders while they wait for them to deposit eggs. While the egg sack is being prepared, larvae move from the mother to the eggs before she spins the protective silk covering that also encloses the mantidfly larva. Inside the egg sack, the larvae grow and eventually pupate, consuming all the spider eggs in the process.

The wasp-mimicking mantidfly occurs across the U.S. north into Canada and south into Mexico. Adults inhabit lightly wooded areas with open edges and are commonly found on vegetation. Adults are not often encountered, but individuals and aggregations of up to 20 in a small area have been documented during warm seasons, with the highest frequency of adults during August.

Most mantidfly species are nocturnal, but the wasp mantidflies are active during the day. They are classified as “sit-and-wait” predators, meaning they remain motionless on a leaf or flower until prey items — typically flies, moths or other small bugs — come within striking distance. The raptorial front legs function similar to those of mantises to quickly grab prey items and hold them while they are eaten.

When disturbed, this species typically presents two defensive behaviors. First, they will move their abdomens in a way that resembles an aggravated wasp preparing to sting, curling them down and beneath their bodies. If a threat continues, they will flare out their wings, lean forward and stick their abdomens up into the air while continuing to throb their abdomens in a stinging motion. However, they do not possess a stinger. Mantidflies also fly readily to escape danger.

While this species appears intimidating, it poses no threat to humans or pets. The raptorial front legs and mandibles are too weak to pinch or bite humans. In areas where they are common, mantidflies reduce spider populations because entire spider egg sacs are consumed during larval development.

Batra, S. W. T. 1972. Notes on the behavior and ecology of the mantispid, Climaciella brunnea occidentalis. Journal of the Kansas Entomological Society 45: 334-340. 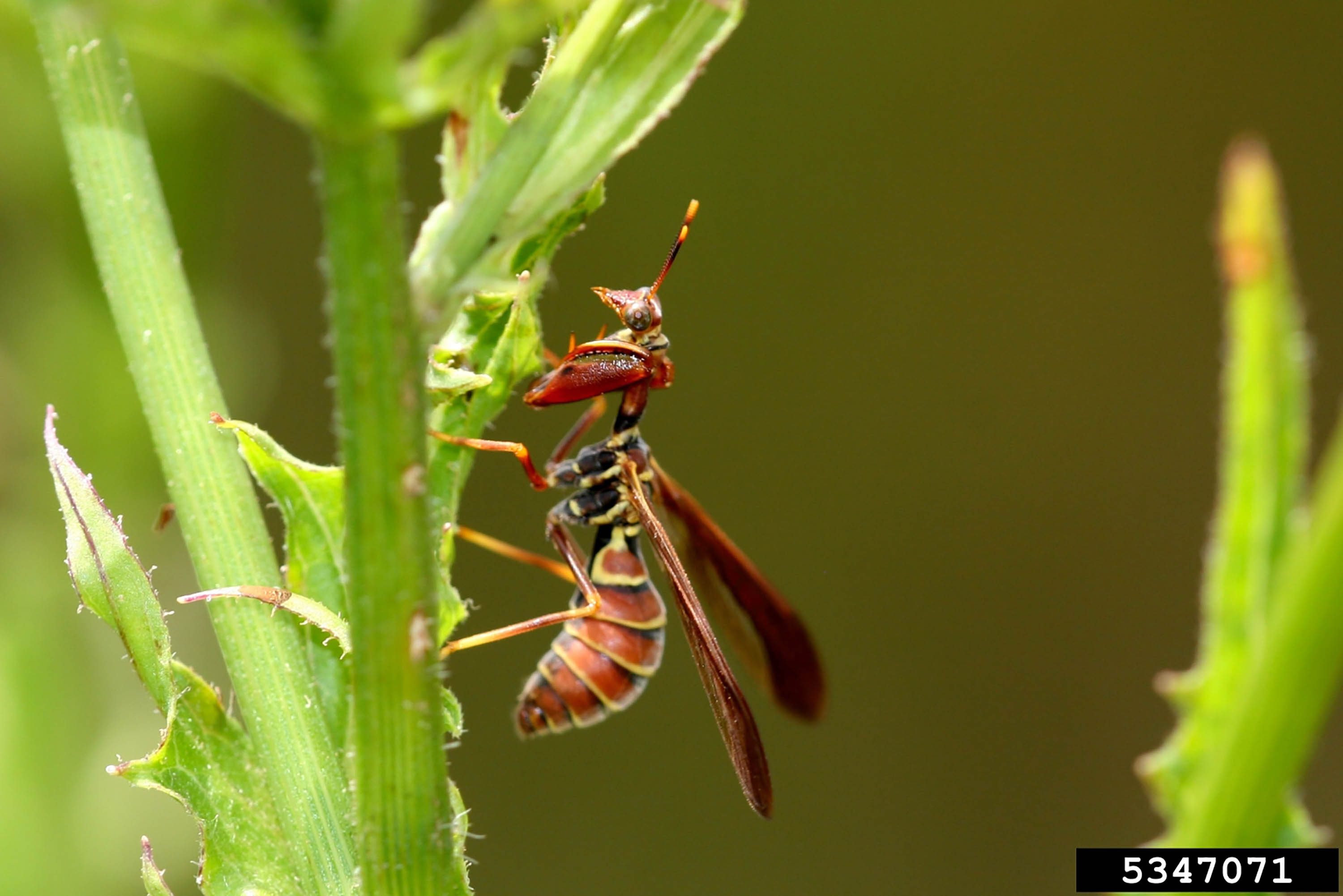 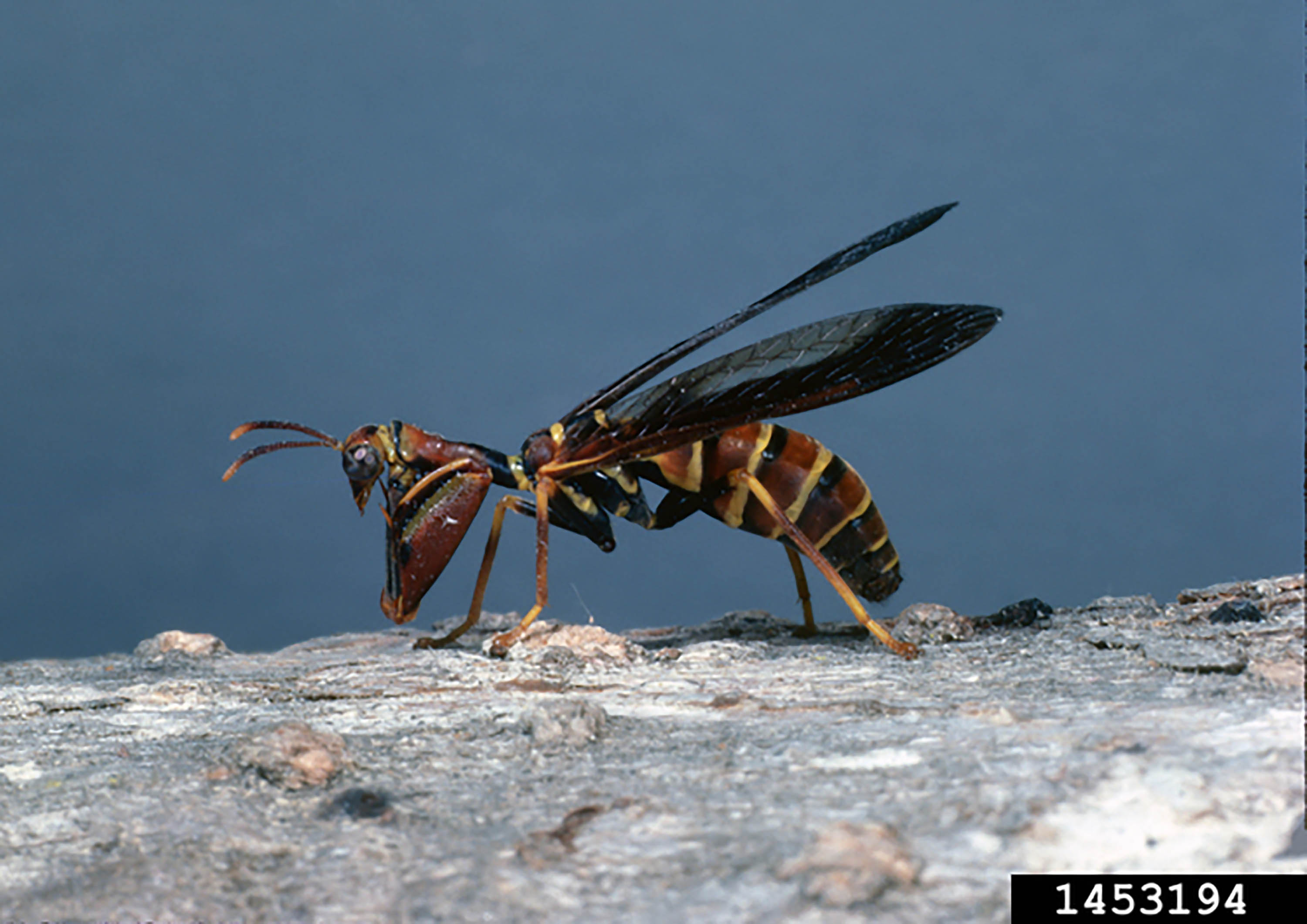