Lawn shrimp are neither insects nor shrimp. They are amphipods. Amphipods are crustaceans that possess distinctively sideways-flattened bodies and eight pairs of legs. Five pairs of legs are used for walking and three for swimming. The name Amphipoda is derived from the Greek “Amphi,” meaning two or different, and “poda,” meaning foot, because of this difference in function. Amphipods possess two pairs of antennae and one pair of eyes. Their heads are fused to the rest of their bodies, giving them a bean shape when viewed from the side. Lawn shrimp are approximately one-quarter to three-quarters of an inch (0.6 to 2.0 cm) in length and translucent to pale pink in color. Their shrimplike movements, coloration and body shape account for their common name. They are commonly misidentified as springtails, which are also found in moist areas. When they die, they turn a dark brown to red color.

Female amphipods possess a brood pouch where they hold their eggs for one to three weeks prior to hatching. When the brood hatches, the females molt, releasing the immatures, which look like miniature adults. Lawn shrimp typically live less than a year.

Lawn shrimp are common in various parts of the western and southern United States. While most amphipods are aquatic in freshwater or marine environments, lawn shrimp are terrestrial, dwelling in soil and mulch. Aquatic relatives of lawn shrimp can be seen in the Louisiana lakes and swamps, especially in the roots of water hyacinth (Pontederia crassipes). They are common in the lakes around the LSU campus.

Lawn shrimp are an occasional nuisance when soil conditions are too wet or too dry, but they are not considered pests. The outer shells (exoskeletons) of lawn shrimp are soft and do not retain moisture well, which makes them highly sensitive to changes in moisture. They often migrate to sidewalks, porches and other elevated areas during and after heavy rainfall to avoid drowning in wet soil. They may invade swimming pools and clog filters when conditions are too dry. They prefer damp, mulched flowerbeds and leaf-covered side yards. They are scavengers of decomposing leaves, roots and other organic matter and contribute to nutrient recycling in the soil.

Literature reports indicate that lawn shrimp may have been introduced to Florida and California from Australia during the 1960s and 1970s, but little is known about their effects on ecosystems following introduction. At least one additional introduced species of terrestrial, moisture-loving amphipod may occur in Louisiana, Talitroides topitodum, which was recorded in the state as early as 1936.

Lawn shrimp do not require chemical control, and no pesticide treatment is currently recommended. When soil conditions are too wet or dry, they will attempt to invade houses or swimming pools. They die quickly when stranded on high ground and can be vacuumed or swept and discarded. Large infestations can be mitigated by reducing mulching and preventing overwatering of flower beds in the vicinity of homes and driveways.

Shoemaker, C.R. 1936. The occurrence of the terrestrial amphipods, Talitrus alluaudi and Talitrus sylvatucus, in the United States. Journal of the Washington Academy of Sciences 26: 60-64. 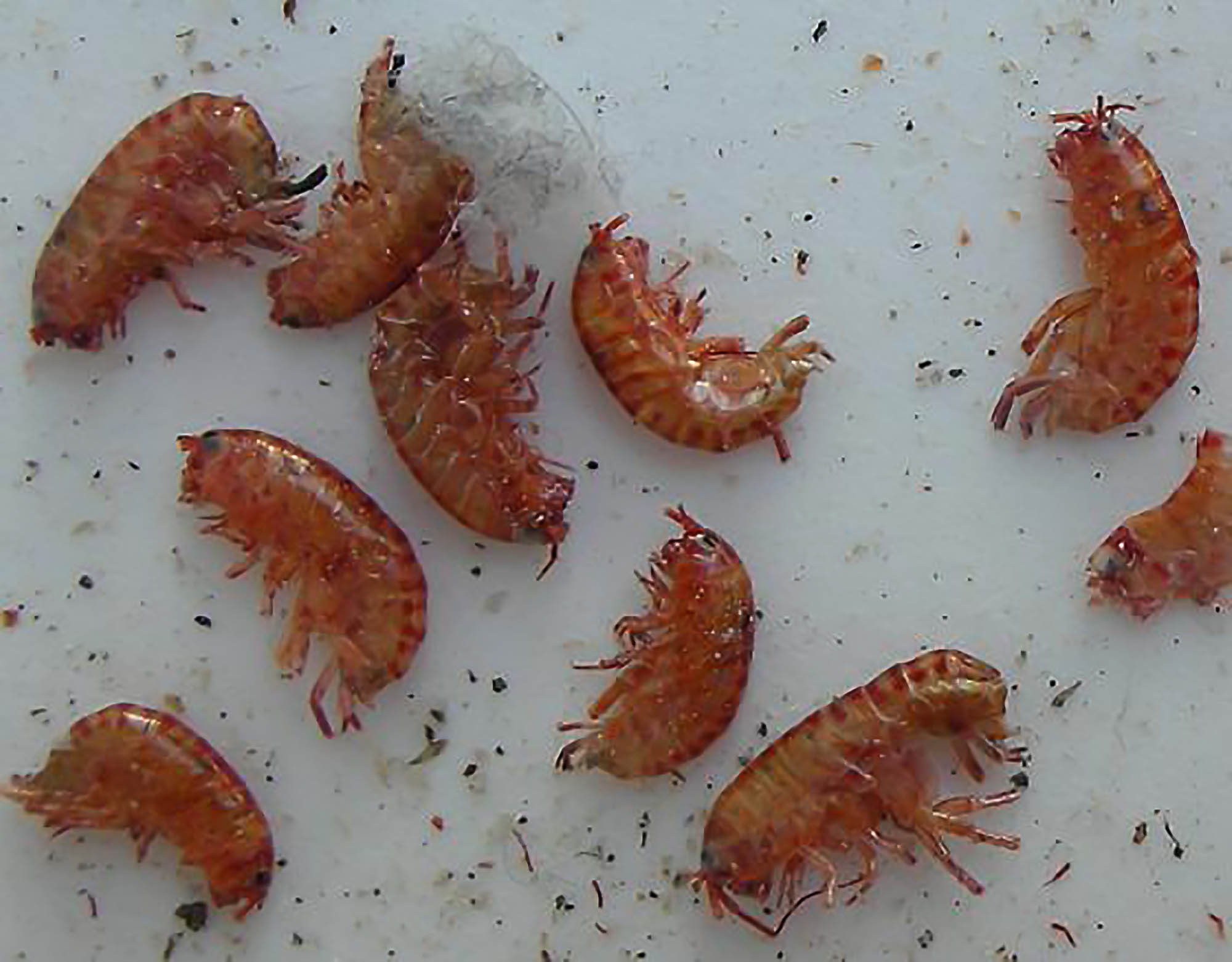