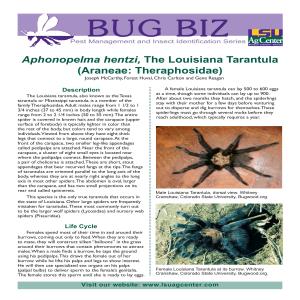 The Louisiana tarantula, also known as the Texas tarantula or Mississippi tarantula, is a member of the family Theraphosidae. Adult males range from 1 1/2 to 1 3/4 inches (37 to 45 mm) in body length while females range from 2 to 2 1/4 inches (50 to 55 mm). The entire spider is covered in brown hair, and the carapace (upper surface of forebody) is typically lighter in color than the rest of the body, but colors tend to vary among individuals. Viewed from above they have eight thick legs that connect to a large, round carapace. At the front of the carapace, two smaller leg-like appendages called pedipalps are attached. Near the front of the carapace, a cluster of eight small eyes is located near where the pedipalps connect. Between the pedipalps, a pair of chelicerae is attached. These are short, stout appendages that bear recurved fangs at the tips. The fangs of tarantulas are oriented parallel to the long axis of the body, whereas they are at nearly right angles to the long axis in most other spiders. The abdomen is oval, larger than the carapace, and has two small projections on its rear end called spinnerets.

This species is the only true tarantula that occurs in the state of Louisiana. Other large spiders are frequently mistaken for tarantulas. These most commonly turn out to be the larger wolf spiders (Lycosidae) and nursery web spiders (Pisauridae). 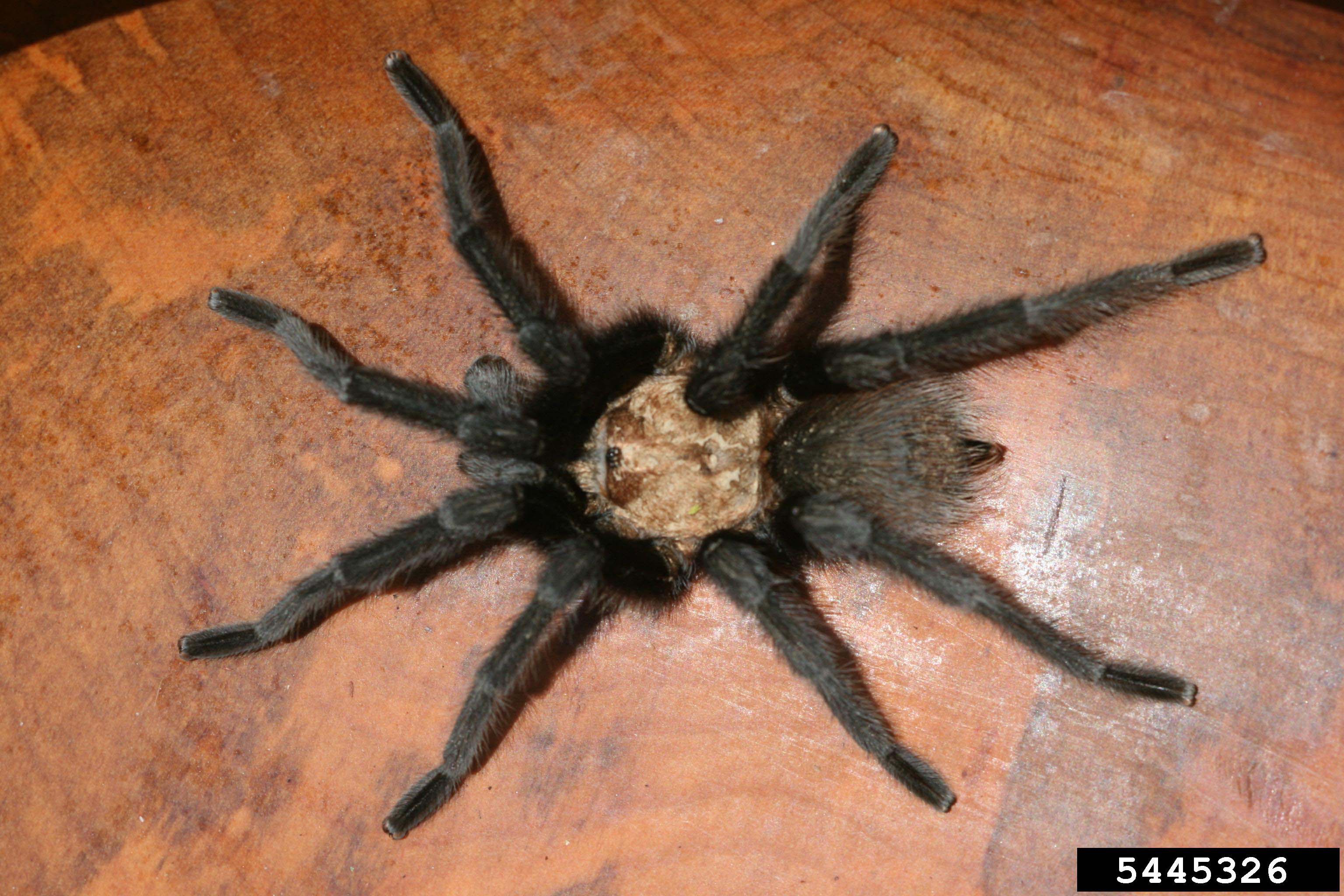 Females spend most of their time in and around their burrows, coming out only to feed. When they are ready to mate, they will construct silken “balloons” in the grass around their burrows that contain pheromones to attract males. When a male finds a burrow, he taps the ground using his pedipalps. This draws the female out of her burrow while he lifts his palps and legs to show interest. He will then use specialized sex organs on his palps (palpal bulbs) to deliver sperm to the female’s genitalia. The female stores this sperm until she is ready to lay eggs.

A female Louisiana tarantula can lay 500 to 600 eggs at a time, though some individuals can lay up to 900. After about two months they hatch, and the spiderlings stay with their mother for a few days before venturing out to disperse and dig burrows for themselves. These spiderlings must go through several molts before they reach adulthood, which typically requires a year.

This species ranges through the southern United States west of the Mississippi River, reaching as far north as Colorado, Kansas and Missouri and south into Mexico. In Louisiana, the species is limited to upland areas, and is most common in western and northwestern parishes. They are absent from low lying areas in south and southeastern Louisiana, and tarantulas reported from these parts are most likely cases of mistaken identity.

Tarantulas are nocturnal, and thus are active only at night, though males may be seen almost any time of day when searching for mates. The species has two mating season peaks during spring/summer and late summer/fall. The burrow-inhabiting females are rarely encountered. Their diets consist mainly of insects and other arthropods. Occasionally they’re known to feed on small vertebrates (small snakes, lizards and rodents).

This species is not considered a pest. An aggravated tarantula will typically raise its front legs in a defensive stance, but the Louisiana tarantula is a relatively docile species and will not bite humans unless handled or stepped on. Bites are similar in severity to a bee sting, but while the venom is not dangerous to humans, it is always best to seek medical attention in the case of an allergic reaction.

Louisiana tarantulas are attacked by at least two species of predatory insects. Large wasps in the genus Pepsis are known as “tarantula hawks.” The female wasp paralyzes the tarantula by stinging it, then drags it to her burrow, where she lays an egg on it. The wasp larva then feeds on the still living tarantula, eventually killing it as the parasitic larva matures. Larvae of large, metallic flies in the genus Lasia (family Acroceridae) are internal parasitoids of tarantulas. The distributions of both of these insects correspond to the occurrence of tarantulas in Louisiana.

Although Louisiana tarantulas may look intimidating, they rarely enter homes and are not considered pests. If one makes its way into your yard, simply allow it to pass and keep kids or pets at a safe distance. If one is found inside your house, garage, or shed, using a broom may safely shepherd it out.