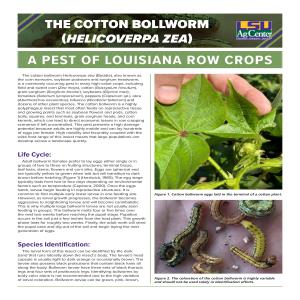 The cotton bollworm Helicoverpa zea (Boddie), also known as the corn earworm, soybean podworm and sorghum headworm, is a commonly occurring pest in many high-value crops, including field and sweet corn (Zea mays), cotton (Gossypium hirsutum), grain sorghum (Sorghum bicolor), soybeans (Glycine max), tomatoes (Solanum lycopersicum), peppers (Capsicum sp.), okra (Abelmoschus esculentus), tobacco (Nicotiana tabacum) and dozens of other plant species. The cotton bollworm is a highly polyphagous insect that most often feeds on reproductive tissue and growing points such as soybean flowers and pods, cotton bolls, squares, and terminals, grain sorghum heads, and corn kernels, which can lead to direct economic losses in row cropping scenarios if left uncontrolled. This pest presents a high damage potential because adults are highly mobile and can lay hundreds of eggs per female. High mobility and fecundity coupled with the wide host range of this insect means that large populations can develop across a landscape quickly.

Adult bollworm females prefer to lay eggs either singly or in groups of two to three on fruiting structures, terminal tissue, leaf hairs, stems, flowers and corn silks. Eggs are spherical and are typically yellow to green when laid but will transition to dark brown before hatching (Figure 1) (Hardwick, 1965). The egg stage typically lasts from two to four days depending on environmental factors such as temperature (Capinera, 2000). Once the eggs hatch, larvae begin feeding in reproductive structures. It is common to find multiple early instar larvae in one feeding site. However, as larval growth progresses, the bollworm becomes aggressive to neighboring larvae and will become cannibalistic. This is why multiple large bollworm larvae are not usually seen feeding in groups. The bollworm molts four or five times over the next two weeks before reaching the pupal stage. Pupation occurs in the soil just a few inches from the host plant. This growth phase lasts for roughly two weeks. Finally, the adult moth will shed the pupal case and dig out of the soil and begin laying the next generation of eggs. 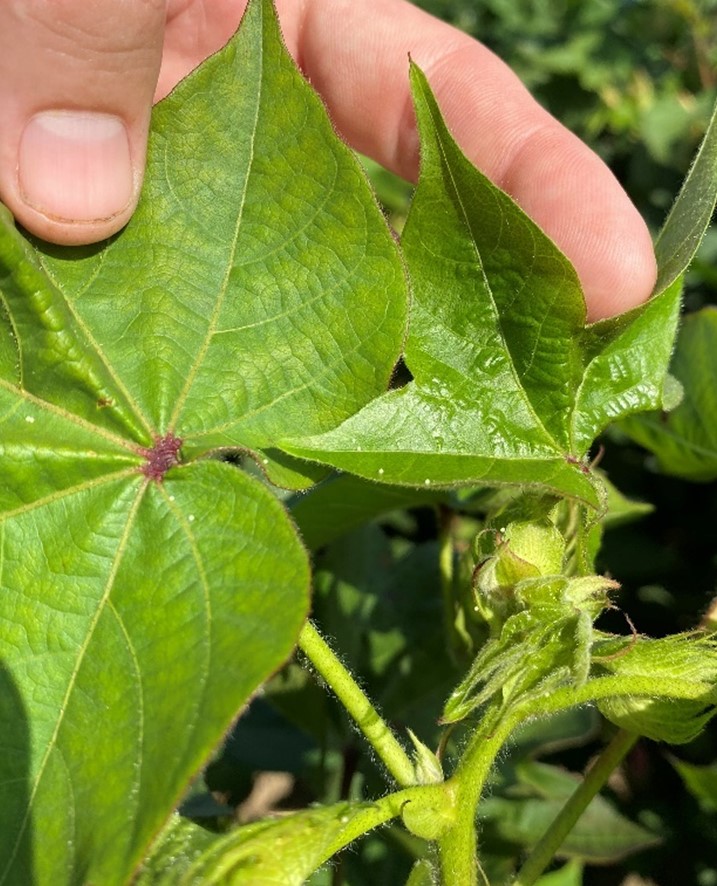 Figure 1. Cotton bollworm eggs laid in the terminal of a cotton plant.

The larval form of this insect can be identified by the dark band that runs laterally down the insect’s body. The larvae’s head capsule is usually light to dark orange or occasionally brown. The larvae also possess black protrusions that contain black hairs all along the body. Bollworm larvae have three sets of black thoracic legs and four sets of prothoracic legs. Identifying bollworms by body color alone is not recommended due to the high variation of larval coloration. Bollworm larvae can be green, pink, brown, black and cream-colored (Figure 2). The adult moth is light brown to tan and has a dot in the center of both forewings. These moths typically hold their wings over their abdomen when at rest (Figure 3). The larvae of the tobacco budworm (Chloridea virescens) are identical to the larvae of the cotton bollworm, and the two species cannot be distinguished from one another in the field. However, the adult tobacco budworm is easily distinguished from the cotton bollworm by the presence of striped wings (Figure 3). 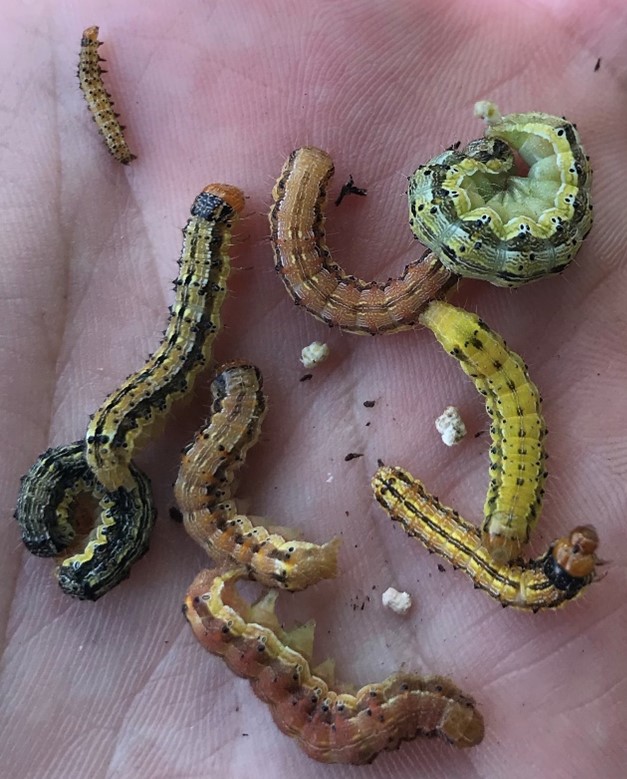 Figure 2. The coloration of the cotton bollworm is highly variable and should not be used solely in identification efforts.

Generations in the Agroecosystem:

The bollworm typically completes four to five generations per year in Louisiana (Capinera, 2000); however, more generations are likely completed in more southern portions of the state. Generations begin in the spring when overwintering pupae hatch. New adult bollworms lay eggs in naturally occurring weedy hosts, including several species of clover. The subsequent generation of moths arising from weedy hosts begins laying eggs on the silks of reproductive corn. Bollworms will infest corn until the ears begin to dry down and become unattractive to egg-laying moths. After this second generation of bollworm moths leave the corn, they move into other crops that are blooming and fruiting, such as cotton and soybeans. Generations become harder to differentiate at this point. However, it is not uncommon that two subsequent generations affecting cotton crops in Louisiana are observed. It should be noted that corn is a preferred host. If corn in bollworm-susceptible growth stages overlaps with blooming cotton or soybeans, corn will typically be preferred for infestation.

In Louisiana row cropping scenarios, the bollworm is known to be a yield-limiting pest in several row crop species. This is due to the direct damage that the bollworm imposes on the marketable portion of the plant. However, this is not always the case in field corn. Bollworms can commonly damage the top third of the corn cob (Figure 4); however, entomologists across the southeastern U.S. agree that this injury may not lead to significant yield or economic losses. It has been demonstrated that it would take upward of 60 damaged kernels per corn ear to notice any economic losses (Olivi et al., 2019), and this excessive amount of damage is not typically observed in timely planted Louisiana field corn. For this reason, infestations occurring in corn do not warrant any type of control. 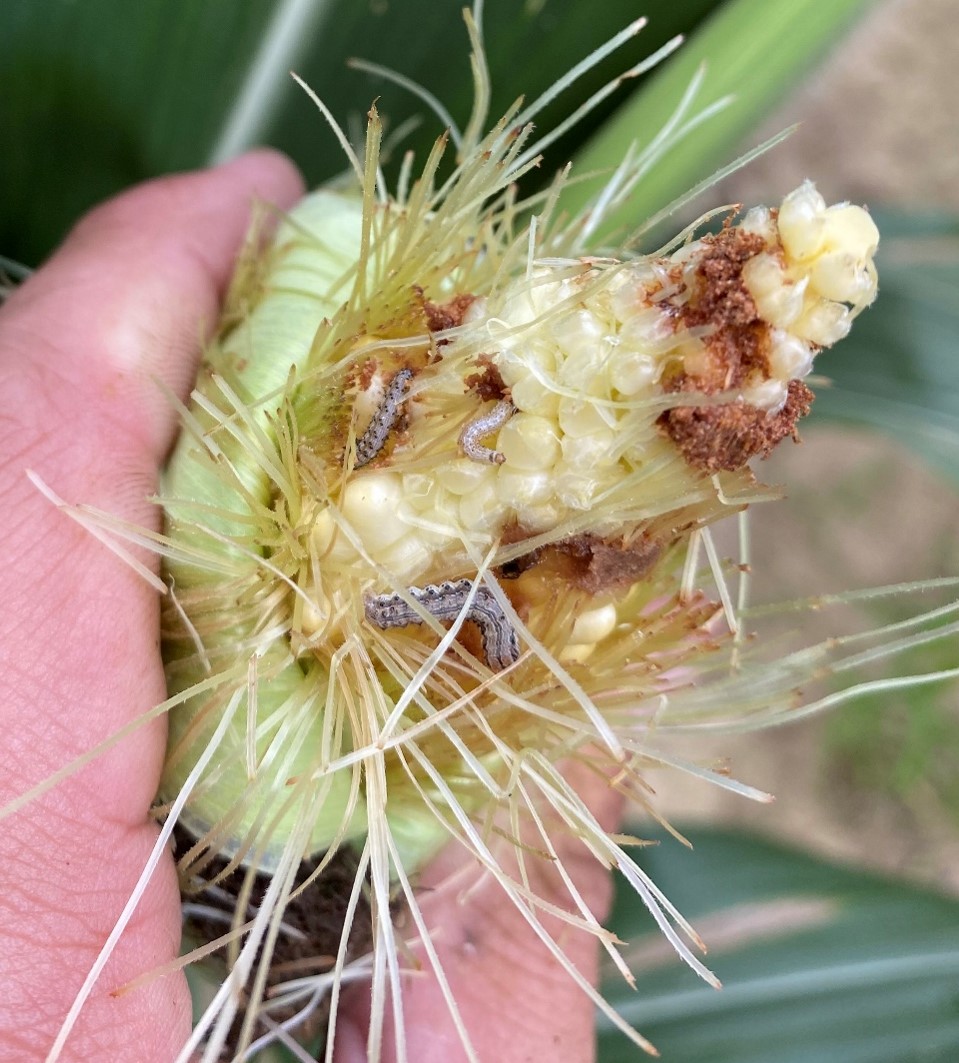 Inversely, in cotton, the bollworm poses a serious threat to yield when infestations are left uncontrolled. The bollworm can feed on several plant positions, including flowers (Figure 5), bolls, terminals and fruiting squares. Infestations and damage in cotton are often directly related to surrounding corn crops. If surrounding landscapes contain corn that matures simultaneously, injury in cotton crops can be pronounced. Adversely, in landscapes with corn that matures irregularly, damage in cotton may be much less evident (Quaintance and Brues, 1905). This is often observed in Louisiana due to factors that prolong planting windows. 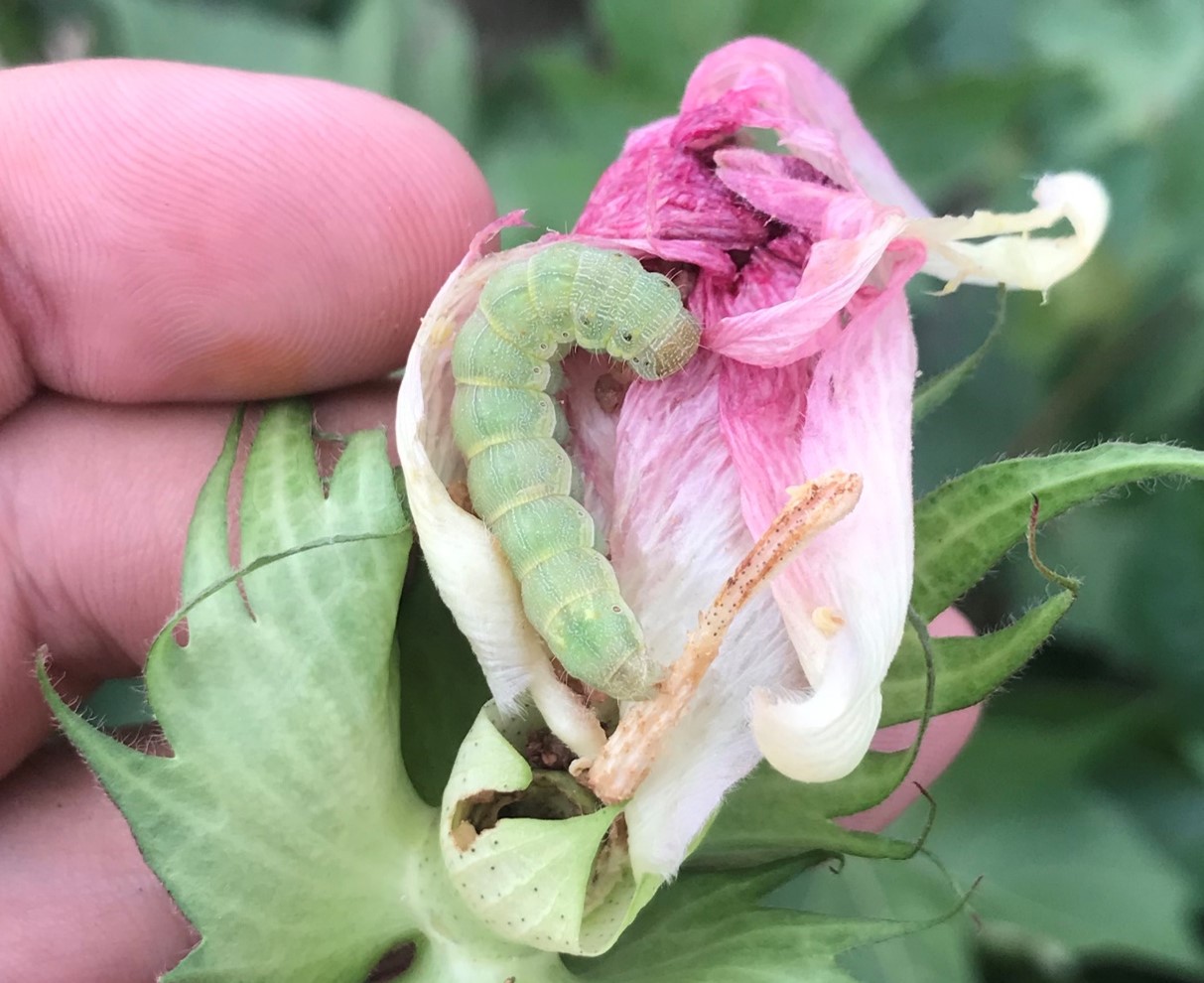 Bollworms can be a significant yield-limiting pest in soybeans (Musser et al., 2011). Adult moths prefer to lay in wide-rowed, blooming soybean crops. Egg-laying can occur before bloom, where larvae feed on foliage (Eckel et al., 1992). Larvae prefer to feed on forming soybean pods and can also feed on soybean blooms, which could lead to the absence of the corresponding pods. Impacts of larval feeding in soybeans depend on several factors, including crop growth stage, larval size, plant compensation and damage timing (Swenson et al., 2013).

In the case of grain sorghum, bollworms are typically found infesting the heads along with two other species, the fall armyworm (Spodoptera frugiperda) and the sorghum webworm (Nola sorghiella). These species make up the headworm complex and typically occur in conjunction with one another. Bollworms can be present during the whorl stages; however, this rarely warrants chemical intervention. Bollworms prefer to feed in grain sorghum after the head has reached full bloom and the young seed starts to fill (Figure 6). 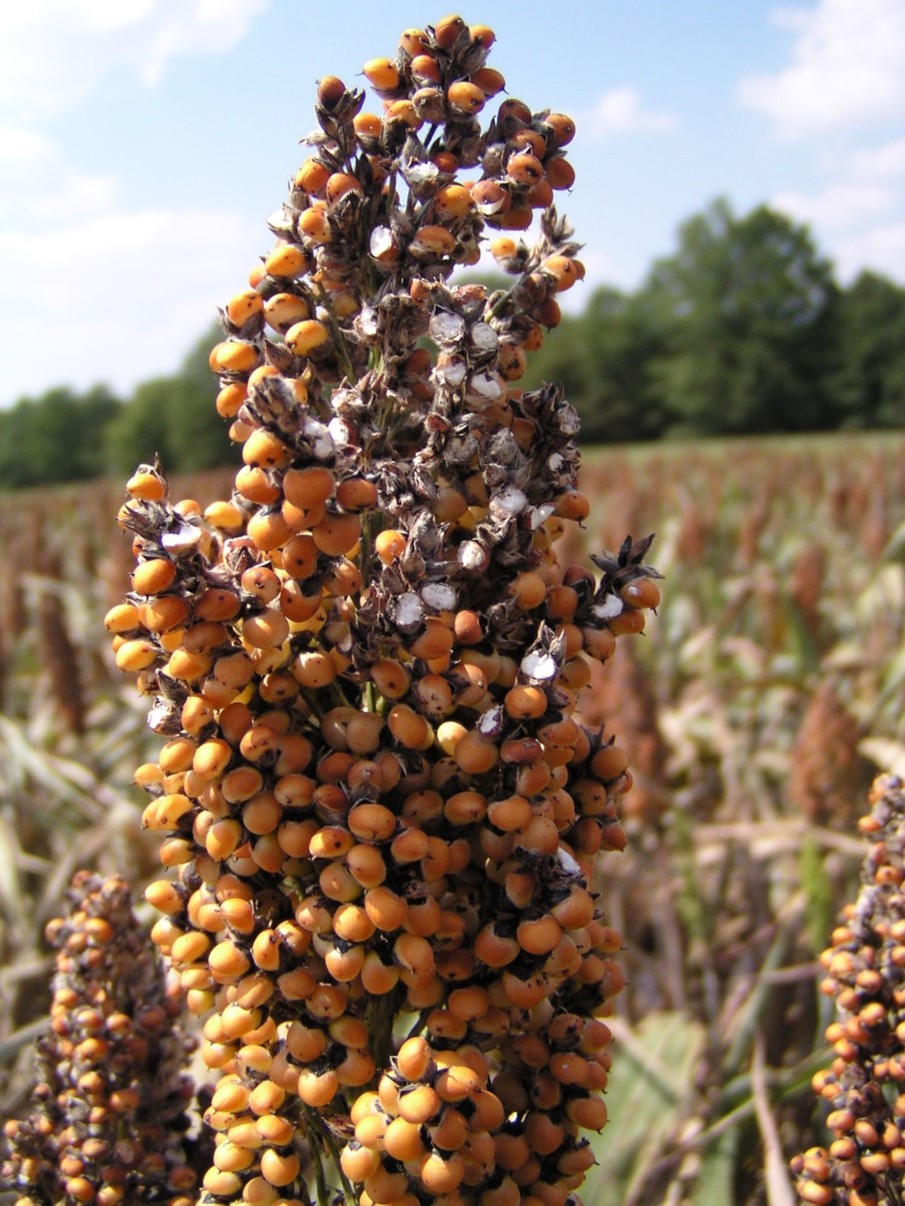 Entomologists and growers alike commonly rely on pheromone traps to monitor bollworm populations in an area. The hartstack style trap (Figure 7) is a metal, mesh cone that is open on both ends with a cylindrical top that can be removed to access the captured moths. A pheromone lure is mounted inside of the trap, which draws in bollworm moths specifically. The bollworm moths fly upward into the trap and into the removable cyclindral chamber, where they cannot escape. These traps are not a measure to control cotton bollworm populations. They simply are used to monitor an area for bollworm moths. Once moth traps begin catching moths, growers, scouts and entomologist can begin scouting crops for bollworm eggs and larvae.

Because the bollworm is not regarded as a significantly yield-limiting pest in field corn, scouting is not warranted in field corn cropping systems. However, eggs can be spotted on fresh corn silks (Figure 8), and larvae will feed on corn ears from sliking (R1) to the soft dough stage (R4). 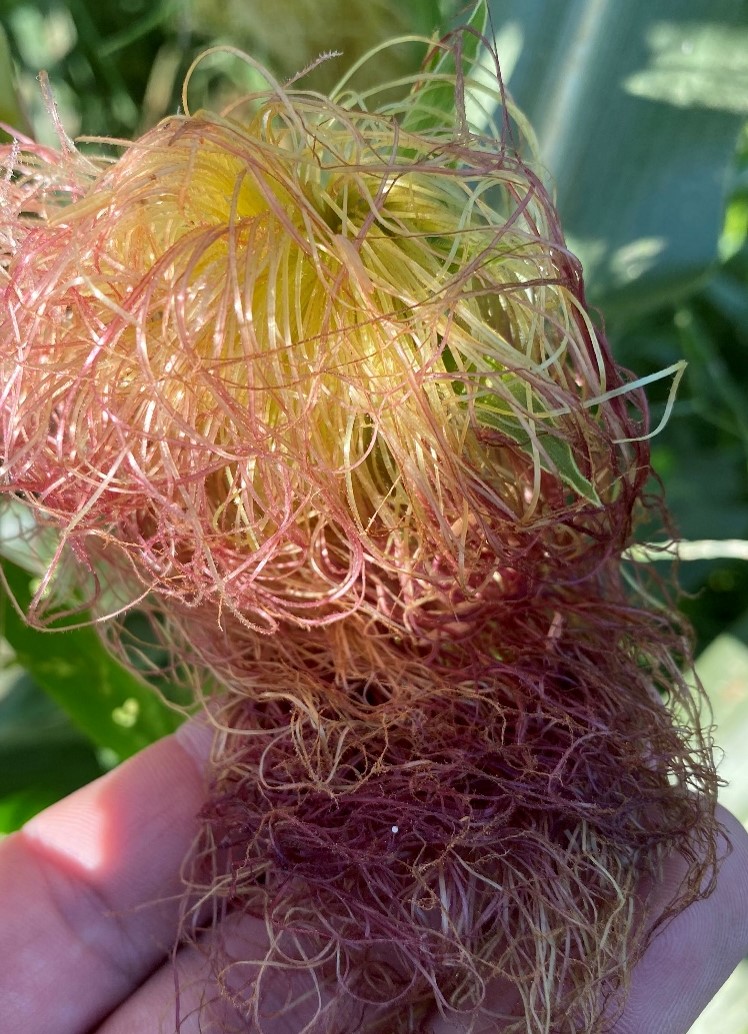 In cotton, bollworm larvae are scouted by conducting visual plant searches. Thresholds for insecticide applications have traditionally been triggered on damage levels obvserved in cotton crops. LSU AgCenter studies have demonstrated that cotton bollworm resistance to the second-generation Bt cotton and Bt corn expressing Cry1/Cry2 proteins has been documented across the state (Kaur et al., 2019; Niu et al., 2021). Due to the reduced bollworm control in Bt varieties expressing two Bt proteins, an “egg threshold” has been implemented. Entomologists have begun recommending triggering an insecticide application on blooming cotton for bollworms when 20% of plants have at least one bollworm egg present anywhere on the plant. Triggering an insecticide application using the egg threshold in the second generation Bt cotton varieties containing Cry1Ac/Cry2A proteins helps alleviate the selection pressure from the Bt proteins and allows for more active ingredients and better control. Damage thresholds should be triggered at 6% fruit injury of any kind or 2% boll damage with damaging populations of bollworm larvae present.

The third generation Bt cotton varieties expressing the Cry1, Cry2, and Vip3A proteins are effective against Lousiaina bollworms, including the Cry1- and Cry 2-resistant populations. Thus, it is not recommended to make insecticide applications on bollworm eggs for third-generation cotton varieties. This allows the 3-Bt protein technology to work on small bollworm larvae. However, if bollworm damage is observed, insecticide applications should be made when larval counts (1/8 of an inch-plus) exceed 4% (four worms per 100 plants) or 6% fruit damage of any kind.

In soybeans, bollworms are typically scouted using either a sweep net or a drop cloth. Drop cloths are usually 3 feet long but can vary in length. If soybeans are being sampled with a drop cloth, both rows surrounding the drop cloth should be beaten onto the drop cloth. This yields a total of 6 row feet sampled. Once soybeans begin blooming, economic thresholds for bollworm populations are 3 per row foot when using a drop cloth. If a sweep net is being utilized, an insecticide application would be warranted when 38 or more bollworms are caught in 100 sweeps.

Lastly, to sample for bollworms in grain sorghum, sorghum heads can be beaten into a sweep net or bucket, where larvae will fall off and can be identified and counted. An insecticide application would be warranted when infestation levels reach one bollworm per sorghum head. Most of the damage caused by bollworms in grain sorghum occurs once larvae reach the last couple of instars because larger worms inflict increased levels of damage. Additionally, the mortality of small bollworm larvae in grain sorghum is typically high due to diseases and parasitoids, so these factors should be accounted for when making control decisions.

The two main bollworm control methods in the U.S., including Louisiana, are the planting of Bt cotton varieties and application of chemical insecticides. For chemical control, we know that bollworms are resistant to several classes of insecticide chemistries. The pyrethroids stand out in particular because they are fairly cheap. Growers tend to go out with pyrethroids to combat bollworms; however, it is unlikely that we are seeing any economic returns doing this. Entomologists at the LSU AgCenter Macon Ridge Research Station and Red River Research Station have been monitoring pyrethroid resistance in bollworm populations for over 32 years. Since the late 1980s we have seen a gradual increase in bollworm survival after being exposed to pyrethroid insecticides (Figure 9).

Insecticides stemming from the diamide class are currently the most effective in controlling the cotton bollworm in Louisiana cotton fields. Insecticides containing the active ingredient chlorantraniliprole are rather expensive; however, they are effective and provide good residual. We also see some value in regards to bollworm control from insecticides in the insect growth regulator (IGR) class and the spinetoram class.