Variety and hybrid trials are building blocks for yield improvement 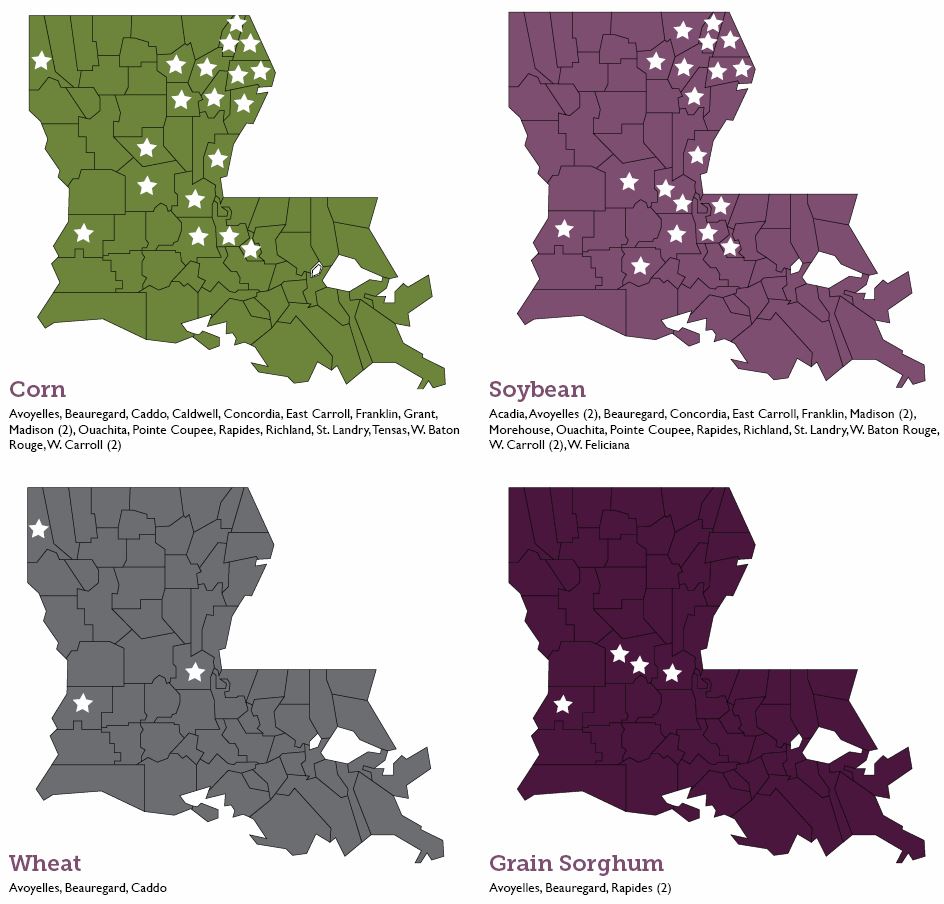 Finding a variety or hybrid that will perform to its full potential is a goal all producers strive for. While it may not be as difficult as finding a needle in a haystack, it does take a trial-and-error approach.

Helping to mitigate the error part, scientists with the LSU AgCenter continue to conduct core block demonstration plots at sites across Louisiana for crops, including corn, sorghum, soybeans and wheat. These locations serve as test plots for many varieties and hybrids and give producers a firsthand look at how well they will perform based on soil types, insect and disease pressure, cultural practices and other factors.

Fromme conducts the corn and sorghum trials. He has 17 off-station corn plots in 15 parishes. Fromme is also conducting an additional trial at the Dean Lee Research and Extension Center near Alexandria.

While the site numbers are similar to previous years, planting conditions for corn were not as favorable as last year. Many of the plots were planted later due to this year’s wet, cool spring, which caused much of the state’s corn crop to get off to a late start.

Interest in grain sorghum in Louisiana has been tepid in recent years. Low prices and the uncertainty of sugarcane aphid infestations led to one of the lowest total acres of sorghum ever planted in Louisiana.

Because of interest being so low, only two off-station sorghum demonstrations were planted during 2018 in two parishes. Fromme has two on-station demonstrations in two different soil types located at Dean Lee.

Interest in wheat has also been down considerably. Three consecutive years of poor harvest conditions along with heavy scab disease pressure led to low yields and low test weights. These conditions caused most growers to abandon any plans of growing wheat.

Padgett reported some fields had yields of more than 70 bushels per acre and test weights in the low 60s. He is hopeful that this year’s success will spur more growers to plant wheat this fall.

With so few growers interested in wheat, Padgett had only three demonstration plots. They were located in Avoyelles, Beauregard and Caddo parishes. The plots in Avoyelles and Caddo focused on variety performance, while the Beauregard location focused on evaluating fungicides for scab management.

Soybeans are Louisiana’s largest crop in terms of acreage, occupying between 1.3 and 1.4 million acres.

Spivey is in his first full year serving as the state’s soybean specialist. He has 19 demonstration plots across 16 parishes, including one at the Louisiana State Penitentiary at Angola. Fifteen of the plots are Group IV beans, and the rest are Group V.

Like corn, many of Spivey’s plots were planted later than he would have liked, but the cool weather dictated that much of the state’s soybean crop be planted during May when conditions were more favorable.

Results of the demonstration plots will be published at lsuagcenter.com in late 2018.