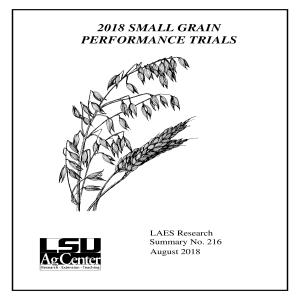 Small grain variety trials are conducted annually by scientists of the Louisiana State University Agricultural Center Agricultural Experiment Station (LSUAC) to evaluate grain yield, agronomic performance, and disease reaction of varieties and advanced lines. The trials are conducted at seven LSUAC research stations representative of the major soil and climate regions of the state. Entries are included in the trials based upon previous performance or at the request of the originating agency. Inclusion of an entry in the trials does not constitute an endorsement. Beginning in 2017, the performance trial in north Louisiana is divided by relative maturity into two groups, early and medium or late (normal) heading in order to facilitate timely planting and harvest. The north Louisiana early trial included 15 varieties (bold font) and experimental lines (normal font) while the normal trial included 45 entries. The 2018 south Louisiana performance trials included 32 entries.

When choosing varieties, growers should consult their local extension agents and choose varieties based on two-year data within a region, not based on a single year or location. Growers should also consider specific data from the LSUAC variety trial location that most closely matches the weather and soil conditions of their farm and should avoid growing a single variety on a large acreage. Growing several varieties helps hedge against losing the entire crop to chance occurrences in weather or shifts in pathogen or pest races or virulence patterns. Yield, test weight, maturity, and disease resistance are important traits to consider when selecting varieties. If a grower plans to plant wheat early, he should avoid varieties that have a very early heading date in order to reduce the danger of freeze damage.

Specific management and cultural practices for a location are presented at the bottom of the tables, along with unusual or key observations about that test. All plots were seeded at the recommended rate with seed provided by the originating agency or company (Appendix A).

Data are collected on grain yield, test weight, heading and maturity dates, plant height, lodging, and disease reaction, as appropriate at each location. Grain yield was adjusted to 13% moisture. Least significant differences (LSD's) are reported at the 10% probability level. An LSD of 10% probability (α=0.10) is the level of difference in a trait (like yield) that occurs between two varieties once in every 10 comparisons as a result of random chance due to greater soil fertility, better drainage, slightly greater harvest length, or any other "uncontrollable or unmeasurable factors" in the test, even if the varieties had the same genetic yield potential. If the LSD (0.10) for yield in a trial is 7.0 bu/a, there is a 10% chance that two varieties with a reported yield difference of 7.0 bu/acre are genetically equal and a 90% probability they have differences in genetic potential in that particular environment. LSD values are influenced by the degree of precision that soil fertility, stand establishment, plot length, harvest efficiency, and other variables of the trials are controlled, and by the number of replications of each variety or treatment. The letters 'NS' are used in the text and tables to indicate lack of significance (not significantly different) at the 10% probability level. Correlations are sometimes given to indicate the degree to which two traits, such as rust rating and yield, are related. A correlation between rust rating and yield of r = -1.0 would indicate that for every unit increase in rust there was a proportional decrease in yield.

Bacterial streak (Xanthomonas campestris pv. translucens), Septoria tritici blotch (Septoria tritici) and Stagonospora nodorum blotch (Stagonospora nodorum) are rated on a scale of 0 to 9 during the dough stage of development. A rating of 0 indicates that no disease was present, while a 9 indicates very severe disease. The upper few leaves, heads, and stems below the head are the portions rated for these diseases. Since bacterial streak (black chaff) is not controlled by fungicides, it is important that this disease be distinguished from Septoria tritici blotch. Heading day is given as calendar day (day of year). Lodging is rated on a 0-9 scale, where a 0 indicates that all plants were completely upright.