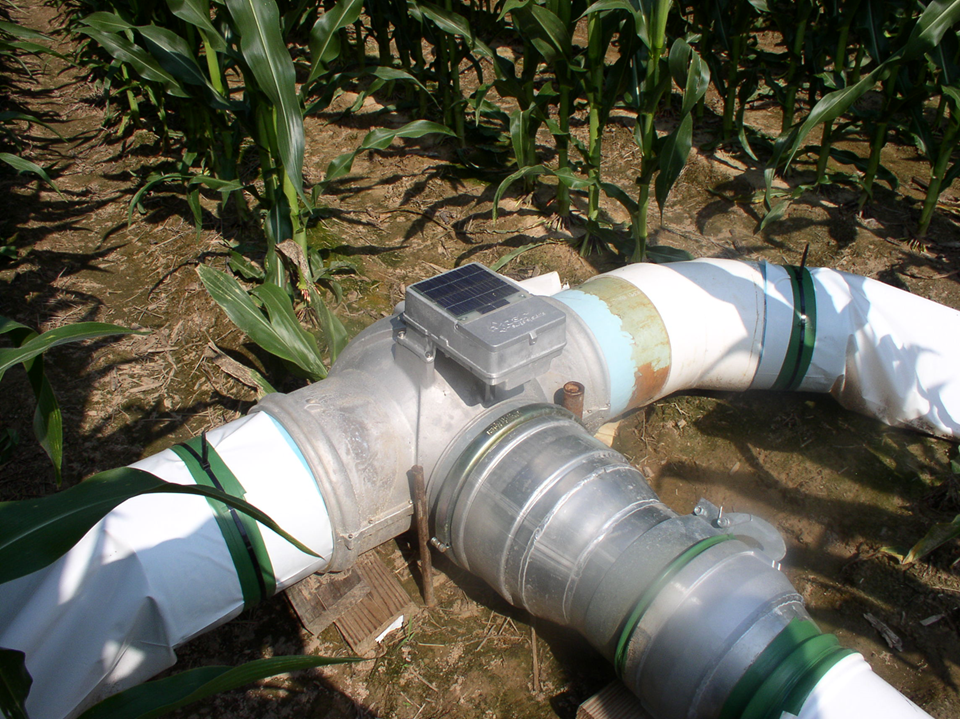 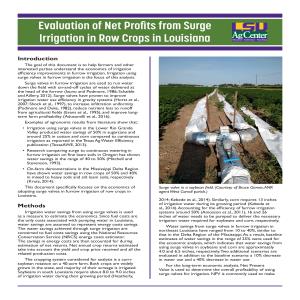 Examples of agronomic results from literature show that:

This document specifically focuses on the economics of adopting surge valves in furrow irrigation of row crops in Louisiana.

Irrigation water savings from using surge valves is used as a measure to estimate the economics. Since fuel costs are the only costs associated with pumping water in Louisiana, water savings are assumed to represent energy costs savings. The water savings achieved through surge irrigation are converted to fuel costs savings using the National Resources Conservation Service (NRCS) energy costs estimator. The savings in energy costs are then accounted for during estimation of net returns. Net annual crop returns estimated take into account the yield and crop price received and all the related production costs.

Water savings from surge valves in furrow irrigation in northeast Louisiana have ranged from 10 to 40%, similar to that in the Delta Region of the Mississippi. As a result, baseline estimates of water savings in the range of 25% were used for the economic analysis, which indicates that water savings from using surge valves in soybeans and corn are approximately 4.0 and 6.5 inches, respectively. Two additional scenarios are evaluated in addition to the baseline scenario: a 10% decrease in water use and a 40% decrease in water use.

For the long-term economic analysis, Net Present Value is used to determine the overall profitability of using surge valves for irrigation. NPV is commonly used to make agriculture decisions, especially when making first-time investment decisions. NPV, a long-term financial tool, helps an individual or business decide whether to make an investment. To determine discounted cash-flow (i.e., converting future annual crop net returns to present value terms), a discount rate of 5% is used for the analysis.

Based on the assumptions and input parameters considered for a 40-acre farm, Table 1 shows the summary statistics for the simulated NPVs for three different expected water use reduction scenarios under two energy price levels. As expected, mean NPV increases with greater savings in water use for irrigation, while the variance remains largely unchanged. At lower fuel prices, NPV is relatively higher and tends to get bigger with an increase in water savings.

Most farmers sensibly aim to not over or under irrigate their crop; however, irrigation is often driven by the need to attain maximum yields, which often leads to applying irrigation more than the required agronomic demand. As a result, the increased costs of irrigation nullify the returns attributable from increased yield. Based on the handful of existing demonstration results, scenarios are evaluated to describe the potential economic effects of using surge valves in furrow irrigation.

The analysis shows that surge valves reduce irrigation use, which is translated to a reduction in energy use. Such reduction in energy use improves long-term profitability in crop production, which indicates that it is profitable to invest in irrigation efficiency practices. Mean 10-year NPV at $3.00 per gallon was in the range of $134,000 to $143,000 on a 40-acre farm. Changing regulations, lower crop prices and changing climate should provide the necessary incentive to invest in irrigation efficiency improvement, as the long-term benefits of such investments are positive. A diversity of factors influences the adoption of such practices, and the variability in production and market conditions suggests that policy approaches, such as providing incentives along with a strong outreach program, are necessary strategies to promote the long-term adoption of such tools.

TexasAWE, 2013. Surge irrigation: Significant potential for water savings in the face of increasing scarcity, Series #OF-01-13.