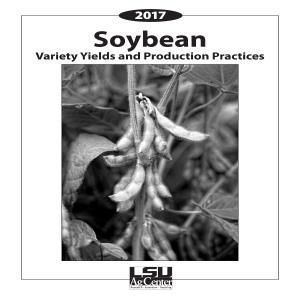 Grain yield is one of the most important traits to consider. Other variety characteristics can indirectly affect yield. The data in Table 1 provide current year variety trial yield results and two-year averages when available. Performance of superior varieties is indicated by bold type and footnotes in Table 1. Varieties are listed alphabetically.

Soybean varieties in Maturity Group IV-V are suggested for Louisiana because they consistently outperform other maturity groups in quality and yield. The early indeterminate varieties have been grown successfully in certain parts of Louisiana. Poor seed quality and excess shattering, however, can be a problem if weather conditions before harvest are warm and wet.

For best use of this guide, refer to Tables 1A-1C for variety yield results, and pick the location fitting your situation. If your farm does not fit any location, choose varieties that perform well at multiple locations.

Yield per acre is an important trait in selecting a variety, but other varietal characteristics should be considered. One or more of the following may be important, depending on the individual farm situation.

Liberty Link soybeans are tolerant of the herbicide glufosinate (Liberty), which is a nonselective, broad spectrum herbicide. The LSU AgCenter has information on Liberty Link variety performance. Do NOT apply Liberty herbicide to any variety not labeled as Liberty Link, which includes, but not limited to, Roundup Ready and/or STS and/or BOLT varieties. Applications of Liberty (glufosinate) to non-Liberty Link soybeans will cause significant injury to and/or death of non-Liberty Link soybeans. Regardless of the herbicide tolerant technology utilized, application of a residual herbicide prior to soybean emergence followed by a postemergence application of a residual herbicide that is tank-mixed with a nonselective herbicide is the best strategy to manage herbicide-resistant weeds. Furthermore, research has shown that maintaining soybean weed-free for the first five weeks after emergence can maximize soybean yields.

Varieties of soybeans differ in susceptibility to diseases and nematodes. Aerial blight is an important foliar disease south of Alexandria, but can occur in other parishes during wet seasons. The disease, Cercospora leaf blight, has become a major disease problem throughout the state. Frogeye leaf spot has been an annual occurrence for the past several years. These, and other foliar diseases, may cause significant yield losses and harvest delays. Soilborne diseases also may be a problem in a given year. Sudden death syndrome (SDS) has been confirmed in Louisiana and is considered a rare occurrence. A soilborne disease with similar foliar symptoms as SDS known as taproot decline has recently been confirmed by pathologists and is likely the most prevalent issue in the state. Phytophthora root rot is an isolated issue and is more prevalent in clay or poorly drained soils. Root-knot nematodes are prevalent in sandy soils and can be an annual problem in certain areas. When these and other diseases occur in official variety trials, ratings are conducted to identify potential sources of resistance, making variety selection the most economical way for producers to manage diseases.

Scouting fields is especially important for locating the most damaging soybean pest in Louisiana, the redbanded stink bug. This pest feeds only on legumes; thus, earlier maturing varieties have the most potential for stink bug damage. In general, MGIV soybeans will have more damage than MGV as pod initiation, and seed set starts earlier and lasts longer. This results in longer exposure to stink bugs over time, resulting in greater opportunities for stink bug injury. As a rule, scouting for redbanded stink bug should begin at R2 and occur every five days, if possible. Failure to detect early populations can result in missed opportunities for control. As a reminder, the action threshold for the redbanded stink bug is 16 insects per 100 sweeps.

Soybeans under continuous irrigation may be subjected to high levels of salts or chlorides from well or surface water. Observations from several years at the Macon Ridge Research Station at Winnsboro have made it possible to pinpoint varieties that have resistance or sensitivity to the problem. The problem shows up as leaf scorching and usually occurs shortly after irrigation water is applied.

There is a certain amount of overlap in maturity between groups within the state. Environmental conditions, especially drought, can cause variation in maturity. In the southern region of Louisiana, varieties may mature five to 10 days later than in the northern region. Most varieties within a group mature in the following range when planted at recommended times:

Table 2 indicates the approximate date of maturity of varieties if planted at the optimum time. Where large acreages are involved, varieties of differing maturity should be selected to stagger the harvest and avoid losses from shattering and poor quality.

Pod height is especially important in rough, poorly drained or new ground. It is important for all varieties to set pods a reasonable distance above the soil surface to aid in harvestability.

Many soybeans in Louisiana are planted on heavy clay soils with poor internal drainage. Research has determined that certain varieties are superior to others under these conditions. Consult results from the St. Joseph Sharkey clay test to select varieties for tolerance to poor drainage. Planting on raised beds is desirable where drainage is less than optimal.

Soybean varieties are more likely to lodge if a population of more than six plants per foot of row is present and if grown on a highly fertile soil. Tall varieties tend to lodge more severely than short ones. When lodging occurs, seed quality and yield are affected. A lodged field is more susceptible to disease and reduces harvest efficiency.

Plant height varies according to growing conditions, planting date, soil type and variety. Table 2 indicates relative plant height among varieties tested in 2011. If canopy closure has been a problem, a taller variety should be selected or a closer row spacing should be adopted. On highly fertile soil, too much growth is sometimes a problem, and a shorter variety is the better choice.

Poor seed quality is more often found in early maturing varieties. Poor quality is especially true for indeterminate varieties that do not mature uniformly. However, in wet harvest seasons when temperatures and humidity remain high, most varieties will have the problem. Poor seed quality occurs when fields are not harvested when ready or under heavy disease pressure. When poor conditions occur between physiological maturity (maximum dry matter accumulation) and harvest, chances increase for a decline in seed quality.

Soybeans need large quantities of nitrogen. Soybeans remove about 4 pounds of nitrogen in each harvested bushel. Fortunately, soybeans are legumes and can obtain most of their nitrogen from the atmosphere. They accomplish this with the aid of the bacterium, Rhizobium japonicum. These bacteria use soybean roots as a livable environment. They form nodules on soybean roots that capture nitrogen from the atmosphere and fix it in a usable form. Seed should be inoculated with Rhizobium japonicum bacteria in soils with no recent history of soybeans or when conditions have reduced bacteria survival.

Phosphorous is critical in the early stages of soybean growth. It stimulates root growth, is essential in the storage and transfer of energy and is an important component of several biochemicals that control plant growth and development. Phosphorus is concentrated in the seed and strongly affects seed formation. Soybeans remove about 0.8 pound of phosphate (P2O5) per bushel in the harvested portion of the crop.

Phosphorus fertilization rates should be based on soil test results. Remember, soil pH affects the availability of phosphorus, which is most available to soybeans when the soil pH is between 6.0 and 7.0.

Potassium is essential in the growth and development of soybeans and is indirectly related to many plant cell functions. Some 60 enzymes require the presence of potassium. Plants with adequate amounts of potassium are better able to resist diseases than potassium-deficient plants. About four times as much potash (K2O) is required by soybeans as phosphate (P2O5). About twice as much potash (K2O) is removed in the seed as phosphate (P2O5). Soybeans remove about 1.4 pounds of potash (K2O) per bushel in the harvested portion of the plant.

Potassium deficiency symptoms are fairly easy to diagnose when they are severe enough to be seen visually and will usually occur on the lower leaves during pod fill as margins (edges) of the leaves appear necrotic (dead and brown). Severe potassium deficiencies can greatly reduce yields. Potassium fertilizer rates should be based on soil test results.

Soybeans should not be planted until soil temperature reaches 60 F. Because emergence also may be affected by cool soil temperatures after planting, early planting decisions should also consider the forecast. Adequate soil temperatures occur in April but it can vary by location and year. Maturity Group IV and indeterminate Group V varieties do best in April plantings. Research in north Louisiana has instances of high yields for Group IV and V planted in mid- to late March. In these cases, daily average soil temperatures were generally at or above 60 F at planting. A few (especially determinate types) may be sensitive to planting before early May. Narrow row spacing may be beneficial when planting early due to the potential of reduced plant height. Always use a base fungicide seed treatment when planting early and conditions are less than favorable.

Plant populations that are too dense reduce yields, encourage diseases and lodging and increase seed cost. When calibrating planters, use seed-per-foot as your guide rather than pounds of seed per acre. In the following table, the estimated pounds per acre should be used only to calculate how much seed to buy. Because of varietal difference in seed size, as well as seasonal variation within lots of the same variety, planting rates can be misleading if expressed in pounds per acre.

Because weather conditions are different from year to year, seeding dates can be affected by environmental conditions. Early or late planting can cause reduction in plant height in many varieties. Generally, late plantings have less chance of success unless irrigation is available or optimal weather and timely rains occur throughout the growing season. A general rule is that 1/2 bushel per day is lost for every day that planting is delayed past the first week of June.

Optimal seeding dates for each maturity group planted in Louisiana are:

Varieties respond differently to row spacing. The most important consideration is that the canopy be closed as quickly as possible to avoid late-season weed problems and low yields. Research has shown that narrow row spacing (30 inches or less) may outyield wide row spacing.

Plant only deep enough to get the seed in moist soil. On sandy or silt loam soils, plant only 1 inch deep if moisture is available. On clay soils, plant 1 to 2 inches deep, depending on moisture conditions. Rolling the soil, especially clays, after planting will help obtain a stand by conserving moisture.