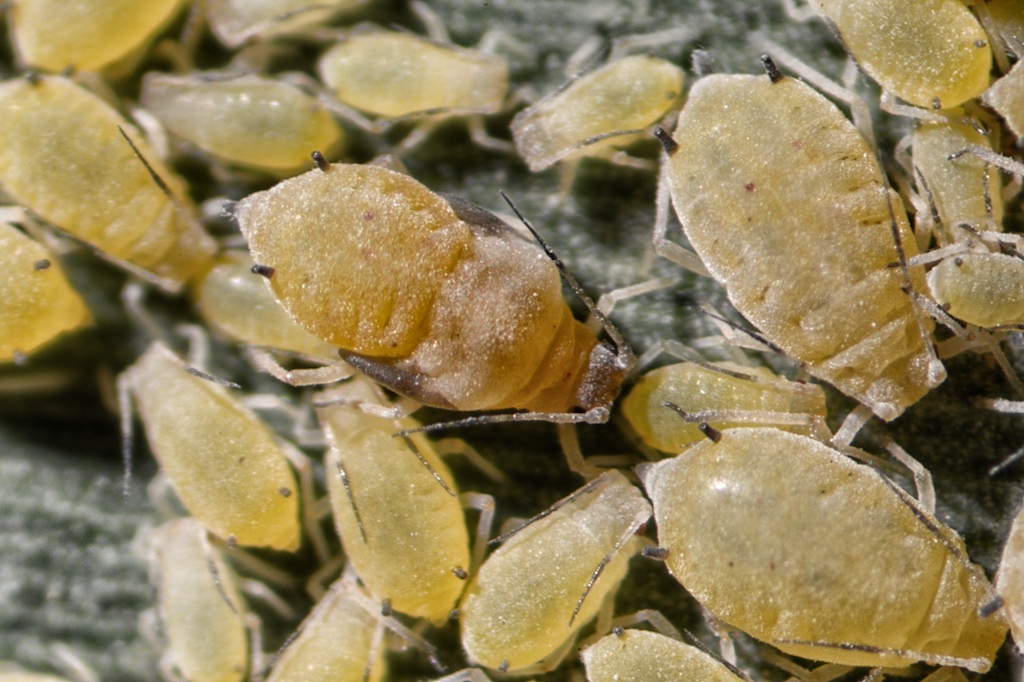 Researchers from the LSU AgCenter are stepping up efforts to combat the sugarcane aphid, the chief pest for grain sorghum crops. Sugarcane aphids suddenly began colonizing grain sorghum in 2013 — a behavior that quickly spread to all parishes and caused catastrophic crop losses in 2014.

“Most importantly, we’re hoping to identify some high-yielding sorghum hybrids that have some resistance to the sugarcane aphid,” said David Kerns, LSU AgCenter entomologist at the Macon Ridge Research Station in Winnsboro. “We’re also looking to improve scouting protocols for aphids and better spraying strategies to minimize their damage.”

Researchers are growing hybrid grain sorghum test plots at the Macon Ridge Research Station, the Northeast Research Station in St. Joseph and the Dean Lee Research and Extension Center in Alexandria. These are split plots, where half is controlled with insecticides and the other half is not sprayed, allowing aphids to produce maximum levels of plant injury.

“There are some sorghum hybrids out there that look pretty good,” Kerns said. “We’re looking for ones that at least offer us some resistance, so either they can tolerate more aphids, or populations develop slower.”

“Whenever we harvest, we compare yields of both those hybrids to see how they perform over the season,” said John David Gonzales, a research associate and LSU graduate student who is working on the sorghum hybrid study, which is primarily funded by a grant from the Louisiana Soybean and Grain Research and Promotion Board.

Researchers also take these hybrids into the lab, where they grow them and infest them with high numbers of aphids to serve as an additional index of susceptibility.

“He (Gonzales) will take a single aphid from the time it’s born and monitor the aphid’s entire life on that plant. He’ll count all of its offspring, monitor its feeding habits and determine how long the aphid lives,” Kerns said.

This information will be used to determine how the plant affects the aphid population growth. It’s a way to measure the plant’s resistance to aphids, Kerns said.

Using pyrethroid insecticides to control other sorghum pests can cause sugarcane aphids to proliferate, Kerns said. Sorghum midge is a tiny fly that is difficult to scout, so some growers may mistakenly spray pyrethroids for midge, even if the insects are not present in their fields.

“If we spray these pyrethroids on other pests, it kills the aphid’s natural enemies, and sugarcane aphid populations really take off because they’re unimpeded by anything that’s going to suppress them,” Kerns said. “We’re trying to offer education on how to scout for midge, what to look for, and to identify some alternative insecticides so producers don’t have to use pyrethroids,” he said.

The LSU AgCenter is also continuing collaborative efforts with Texas A&M AgriLife to develop an integrated pest management strategy for grain sorghum. Most recently, the collaborators established a preliminary action threshold at the boot to milk plant stage of 50 aphids per leaf, with colonization of 20 percent of the plants in the field before spraying insecticides.

“Maybe we can come up with a more efficient way of scouting these aphids that is faster and more accurate,” Gonzales said.

LSU AgCenter researchers hope to answer that question by focusing on the biology and life cycle of sugarcane aphids.

Graduate student Greg Wilson is bringing in different wild grasses and seeing how the aphids respond to these grasses and if any of these could serve as reservoirs for aphid populations, particularly in overwintering situations, Kerns said.

In Louisiana, 100 percent of the sugarcane aphid population has been found to be female and to reproduce asexually, giving birth to nymphs that are essentially born pregnant. These nymphs mature into reproducing adults within five or six days and may produce 30 to 40 offspring over a 20-day period.

LSU AgCenter researchers are using growth chambers to mimic the conditions in countries that share a common latitude with Louisiana — Japan, India and Africa. “Only host plants that have been identified as very reliable are being used,” Wilson said.