Flesh Color: orange flesh with an intensity similar to Beauregard. 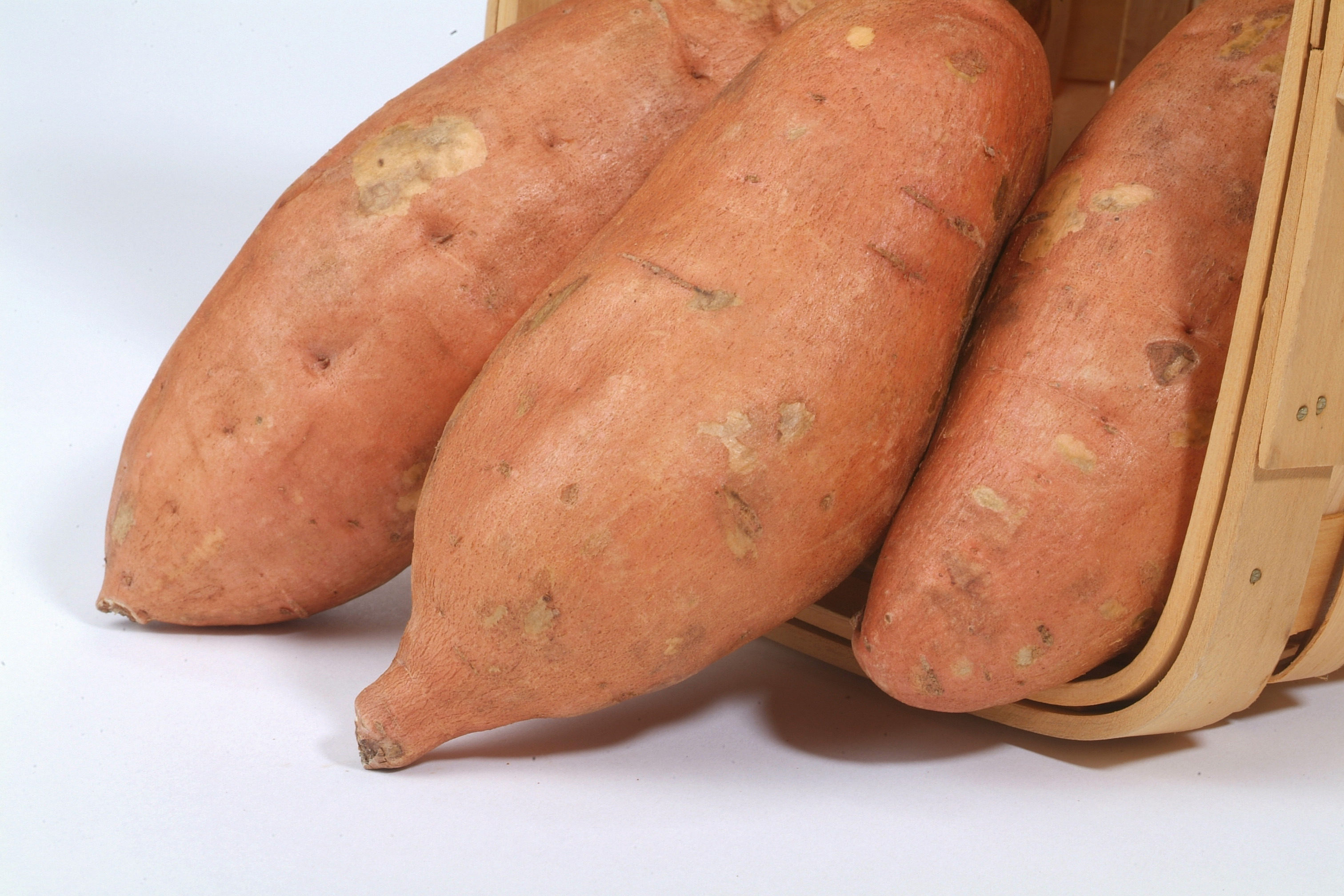 Skin Color: red to purple skin; fades slightly in storage, but very different from the light rose skin of Beauregard. 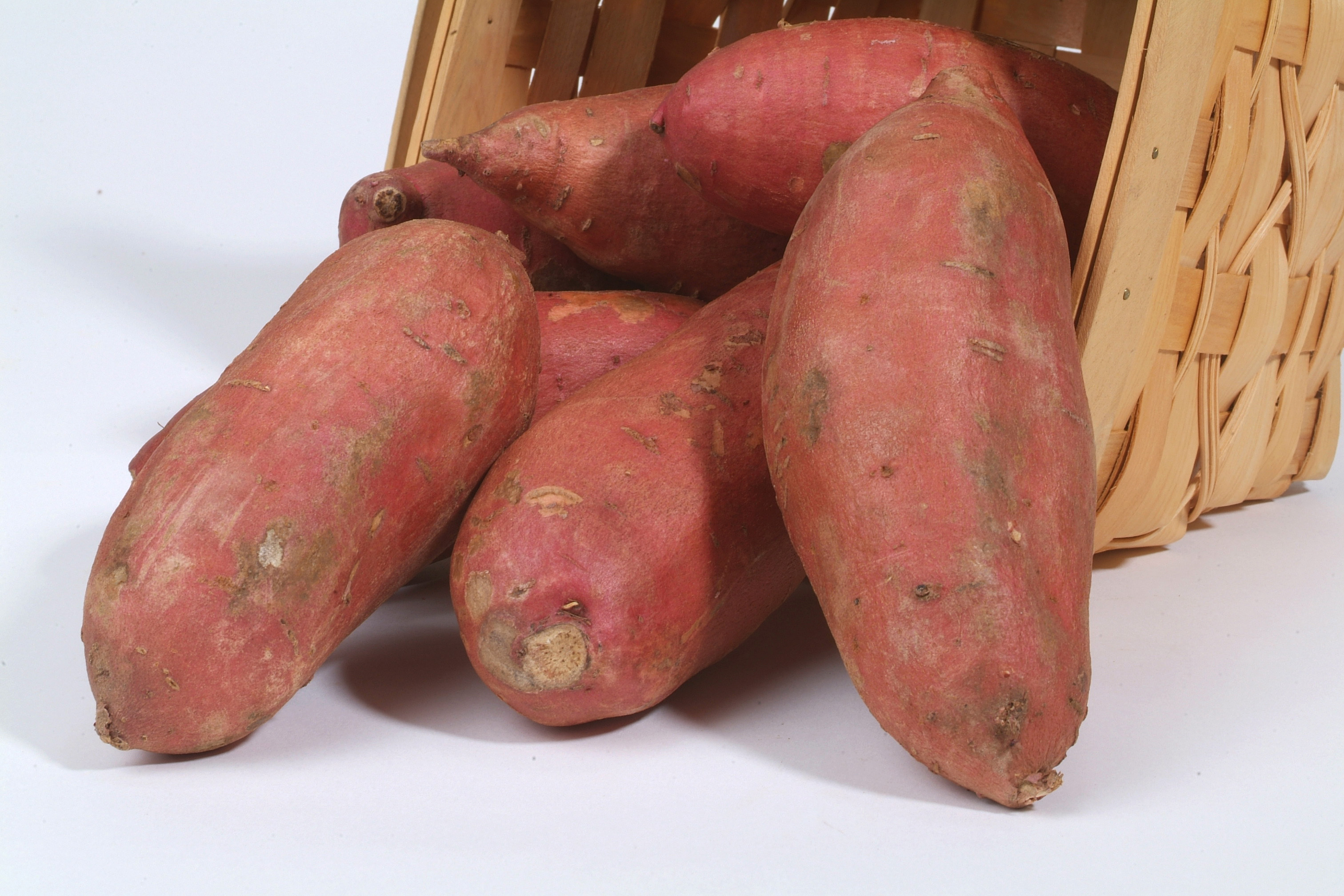 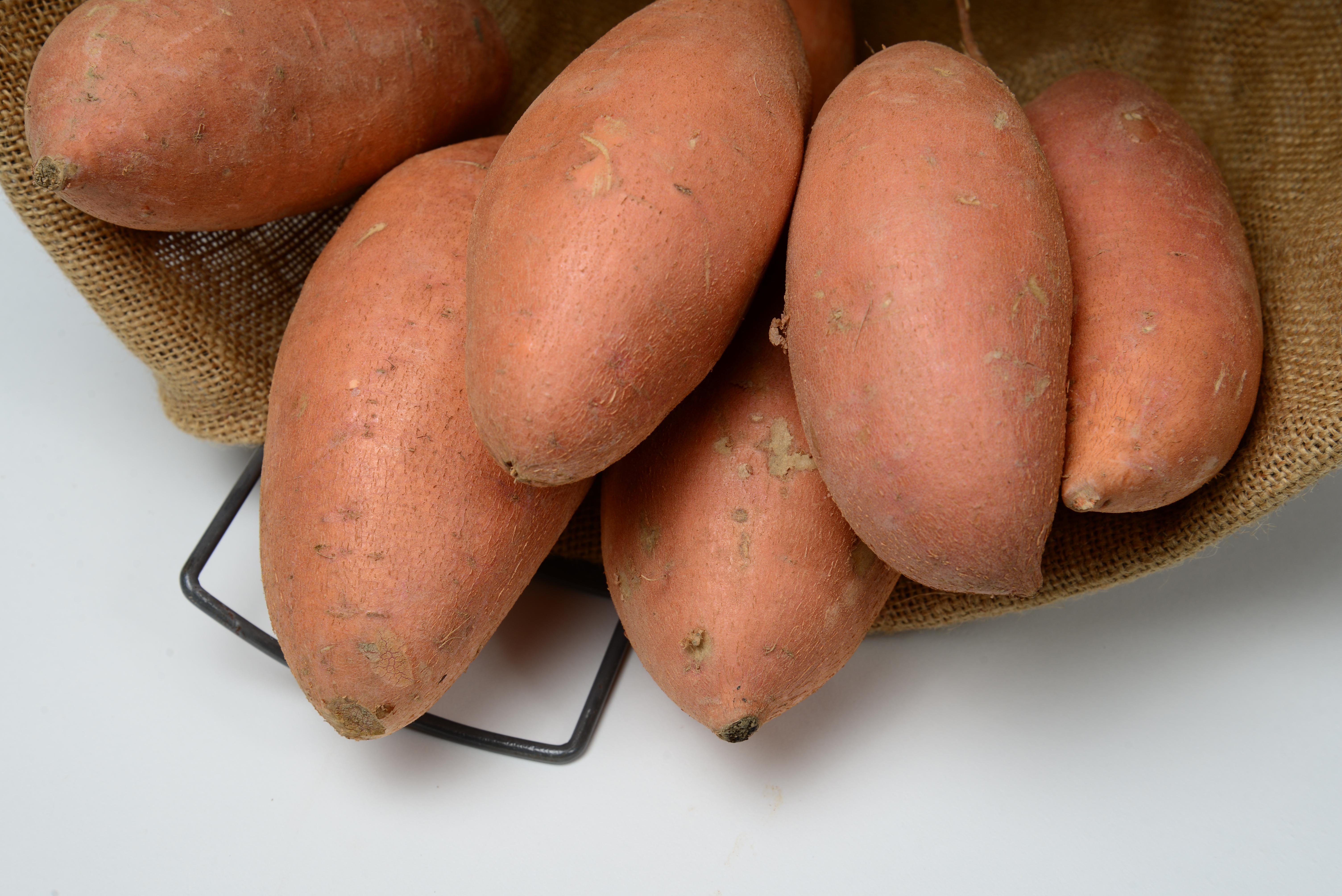 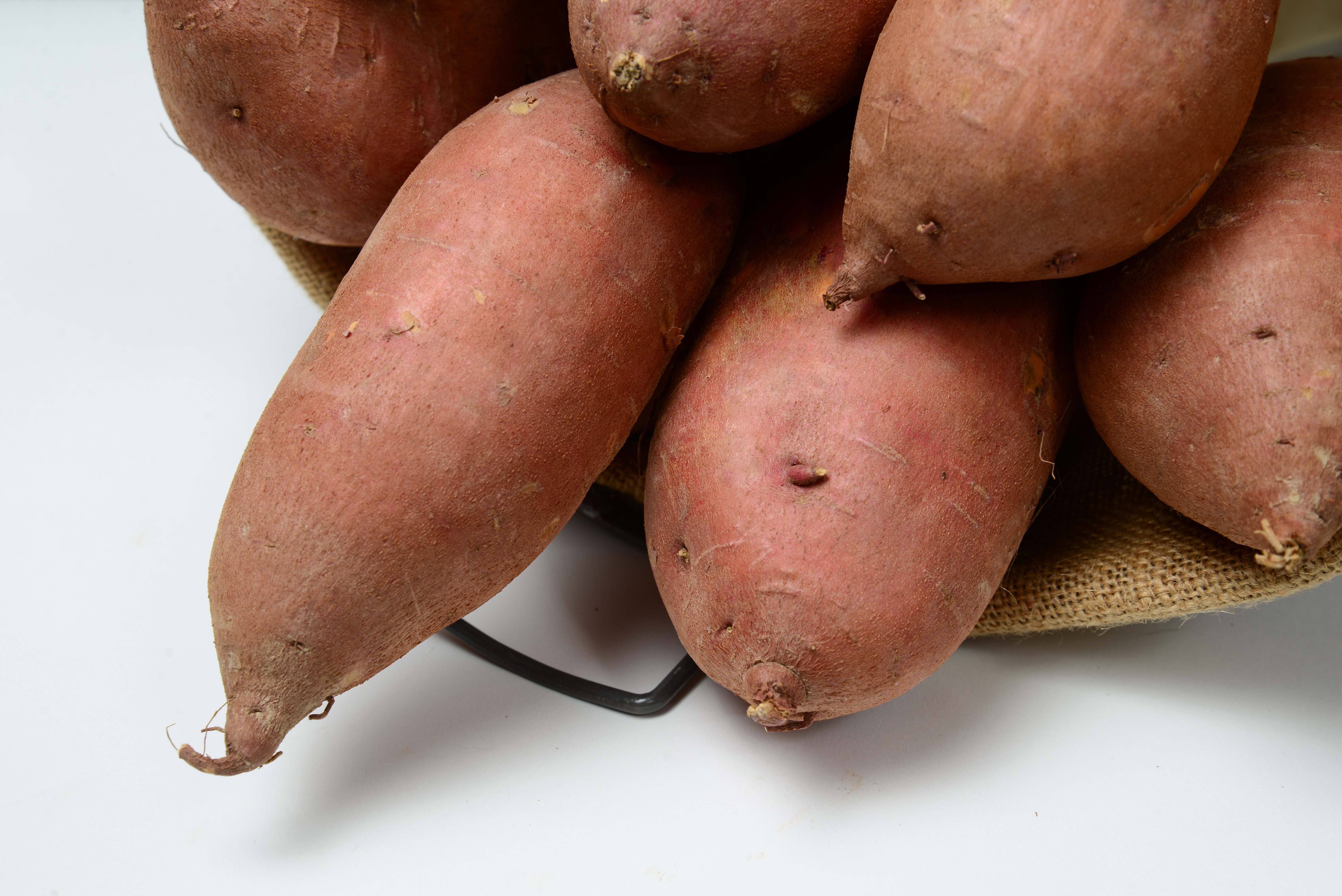 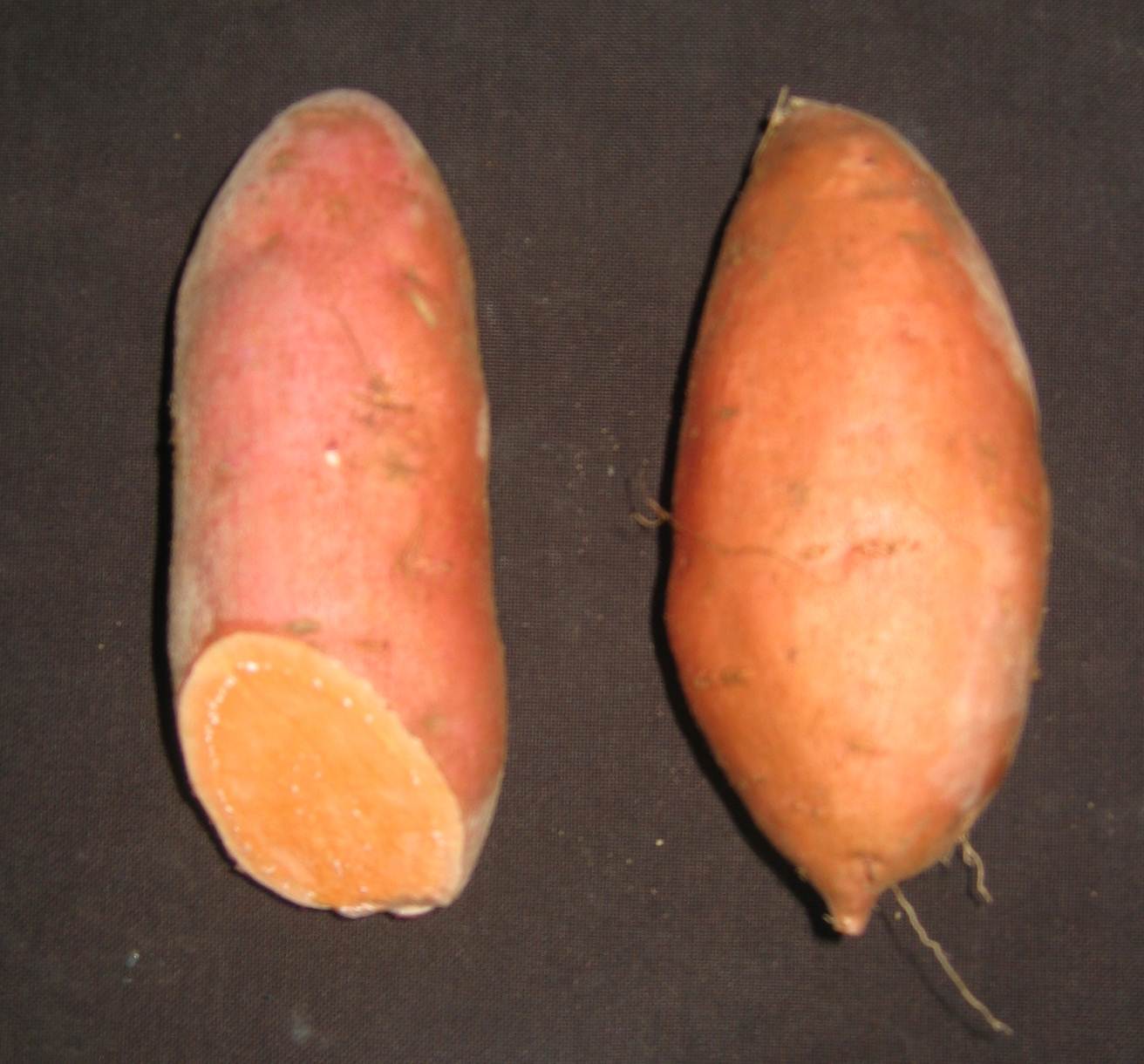 A hill selection from Beauregard grown in North Carolina. Skin and flesh color

generally similar to B-63. In addition, the B-63 assumes a distinct "twining

habit" starting around 50 days after transplanting. This twining habit is

markedly absent in B-14. 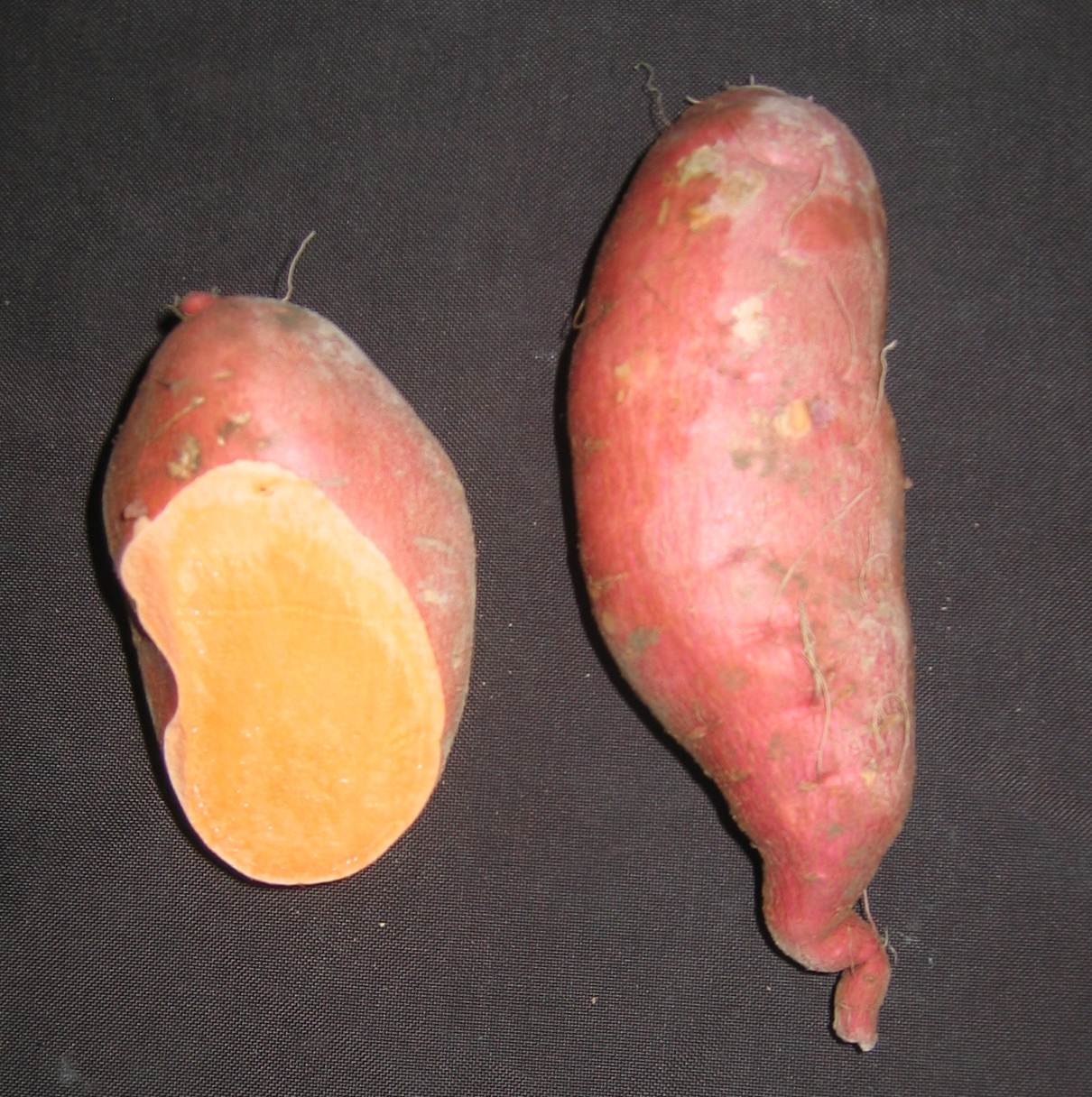 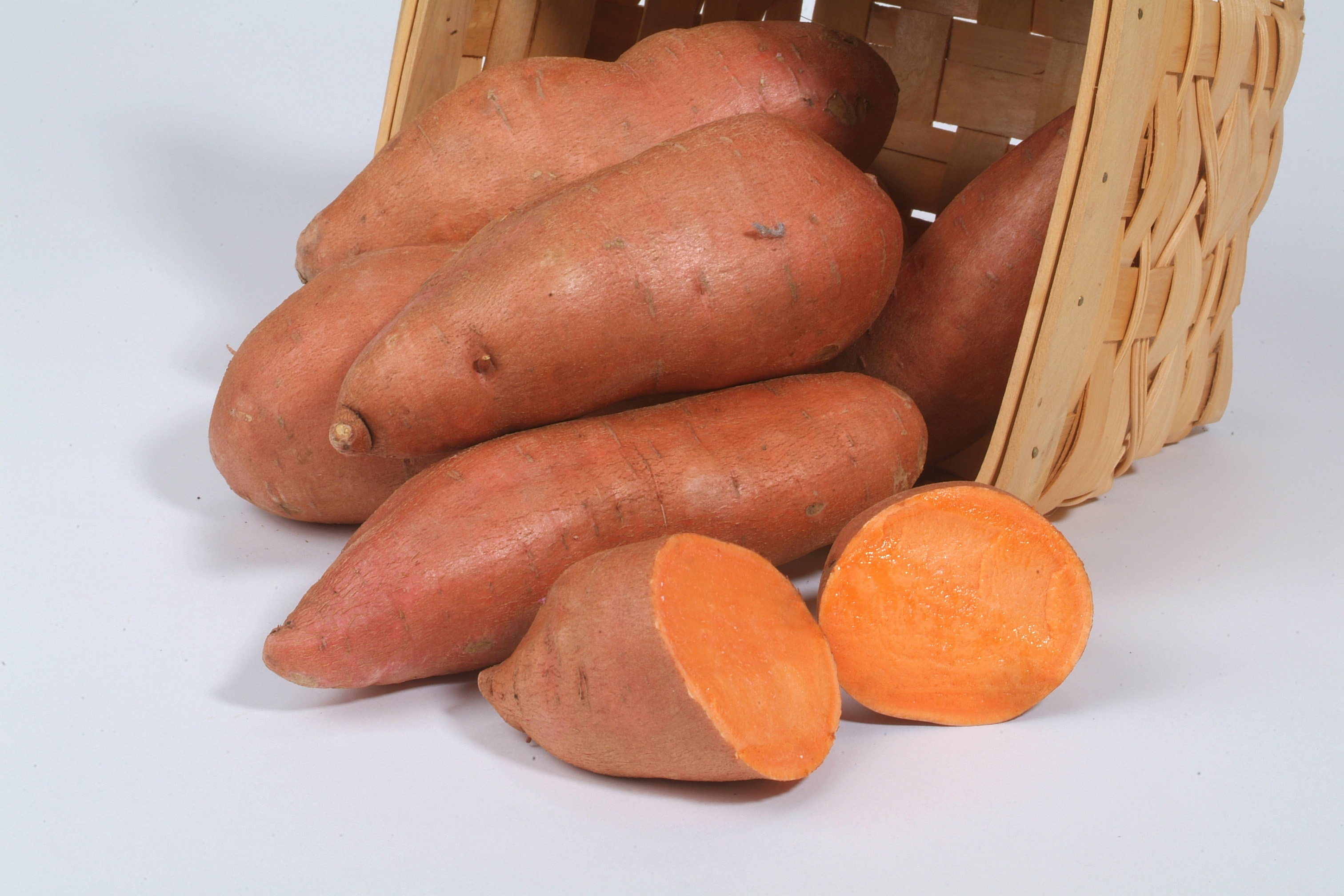 Susceptibility/resistance to common diseases: assumed to be similar to Beauregard. 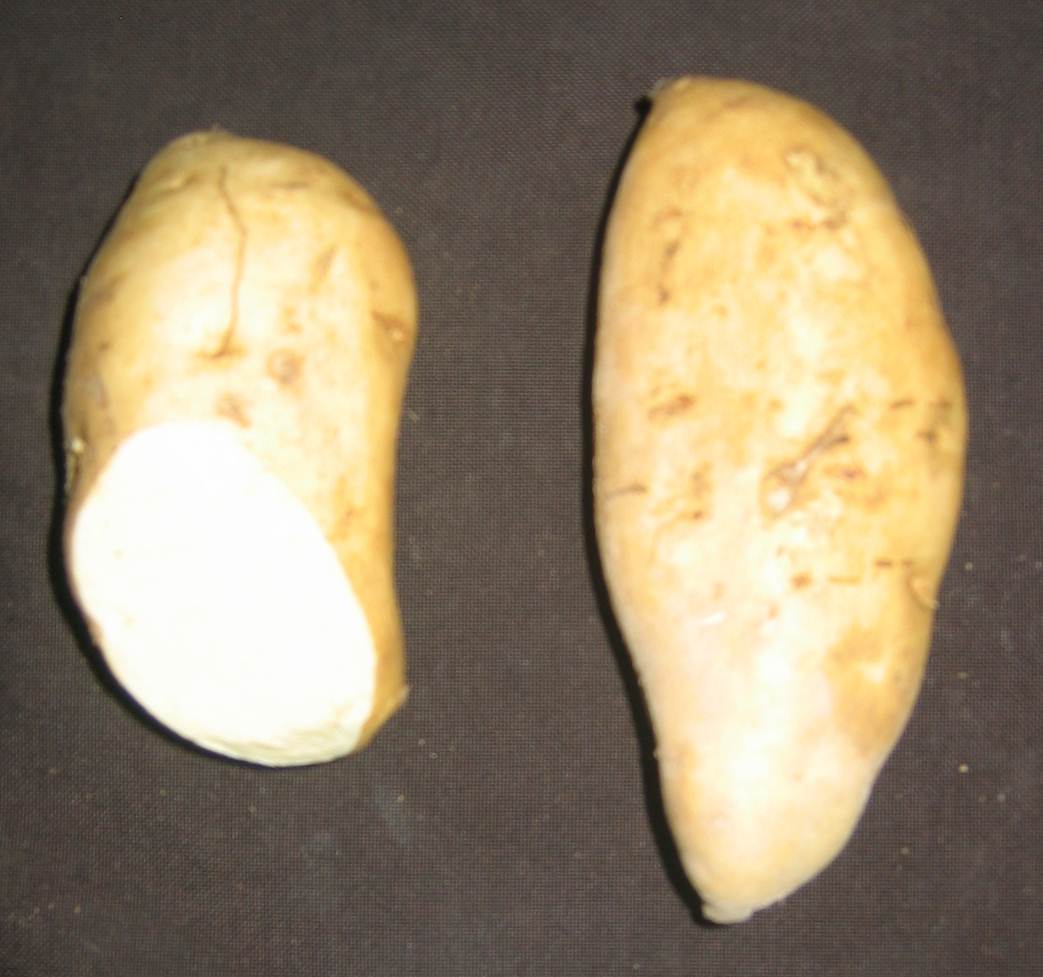 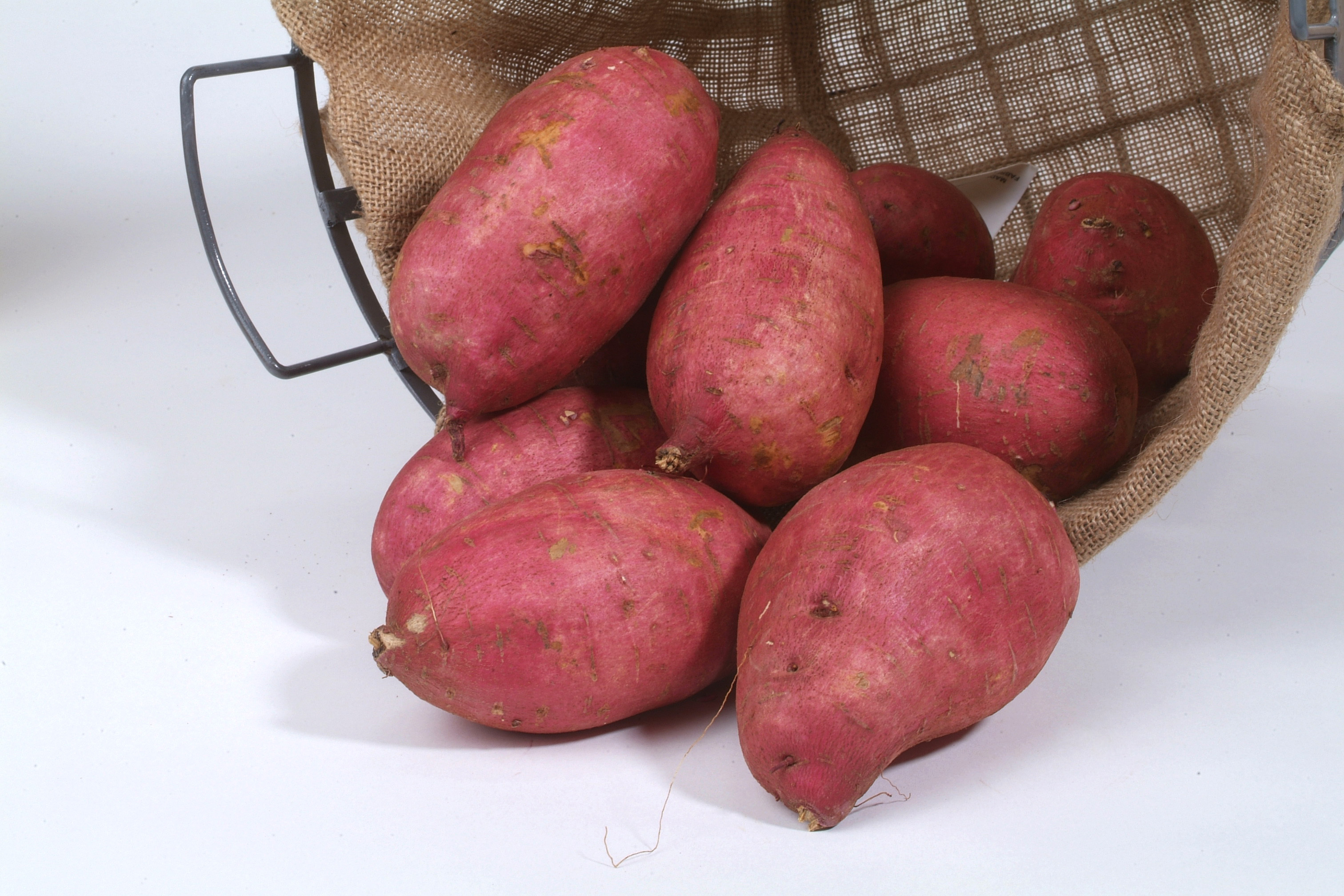 Flesh Color: white with a tinge of yellow; ‘O’ Henry’ has a more yellow flesh 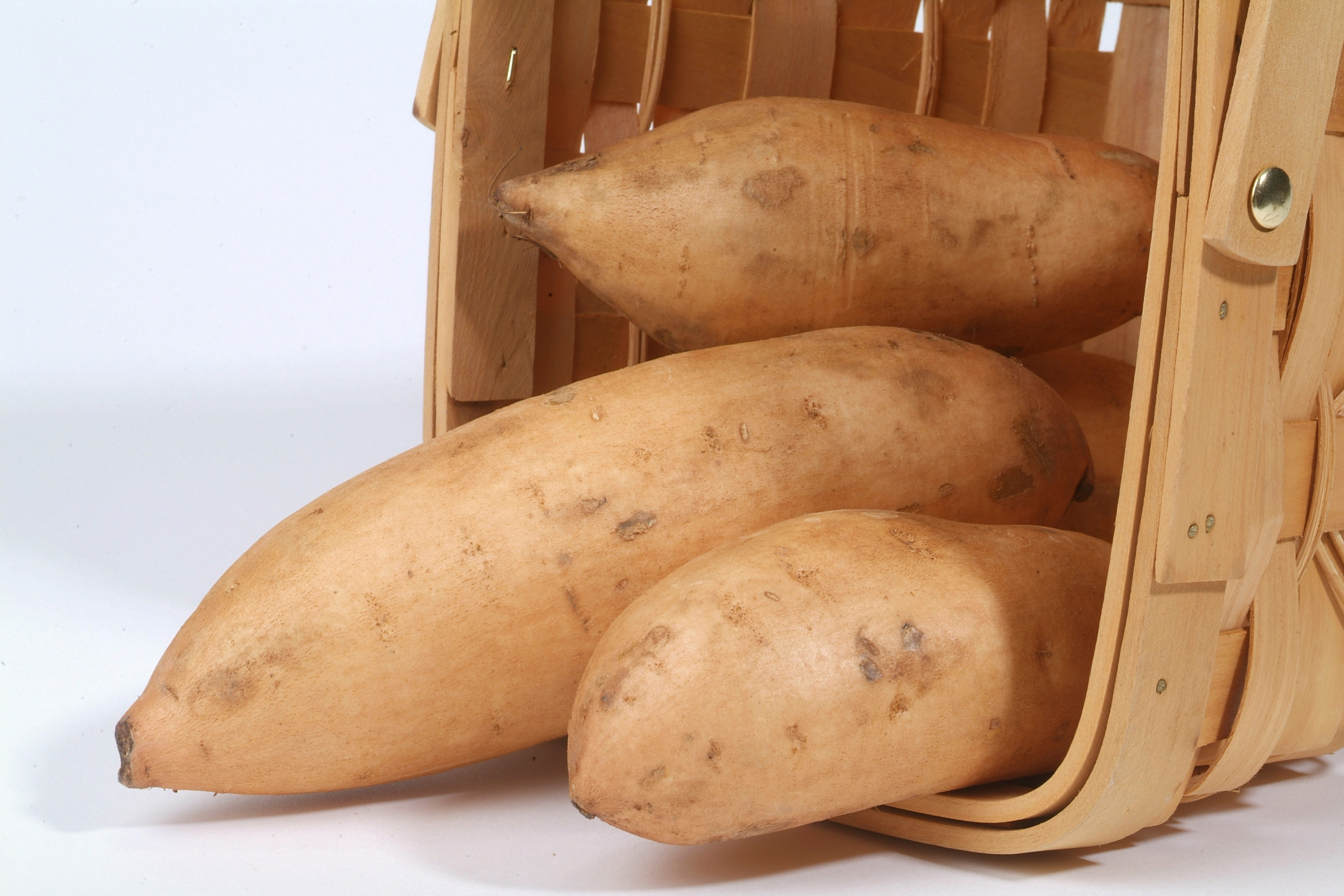 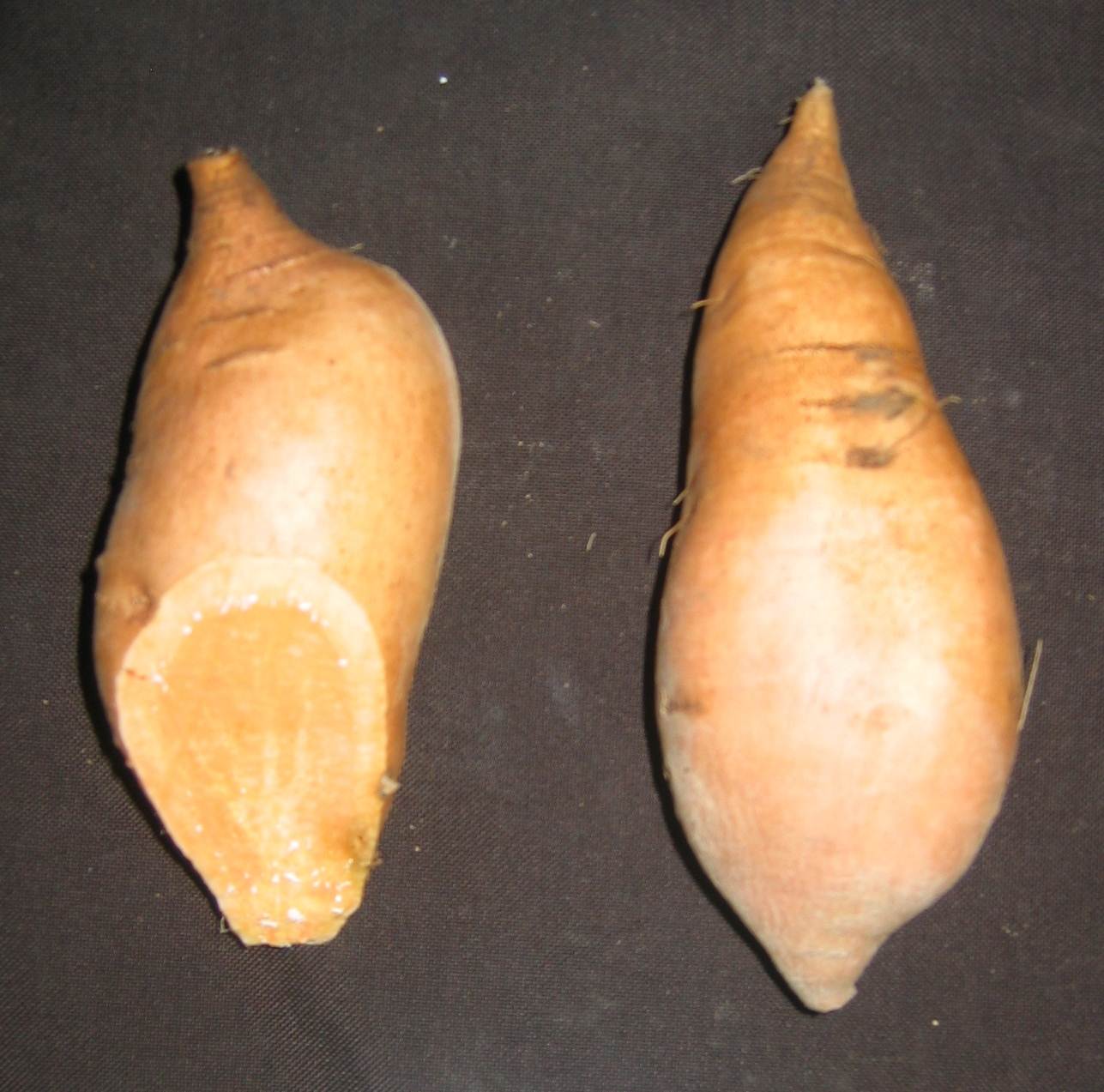 Susceptibility/resistance to common diseases: assumed to be similar to Porto Rico. 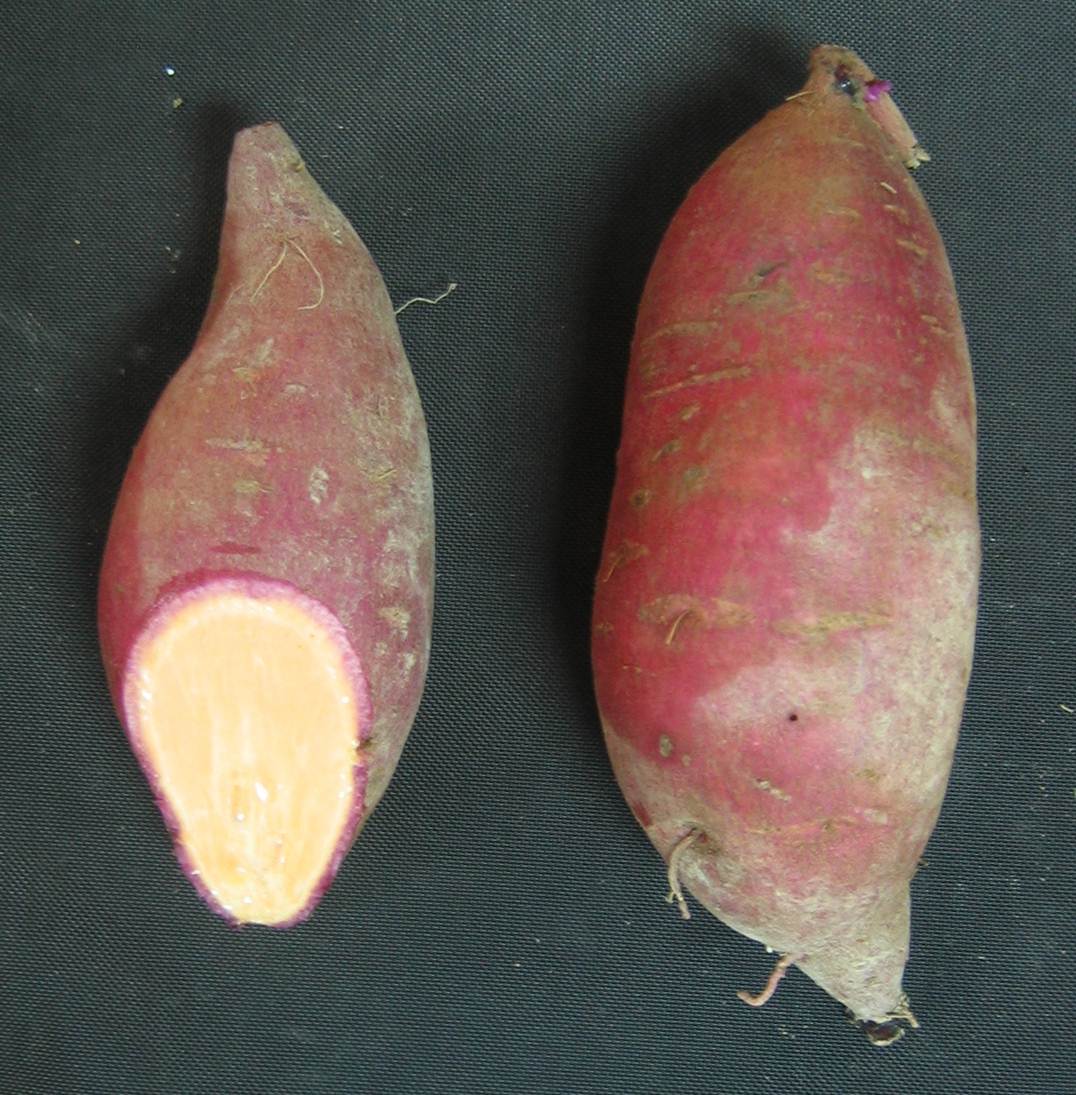 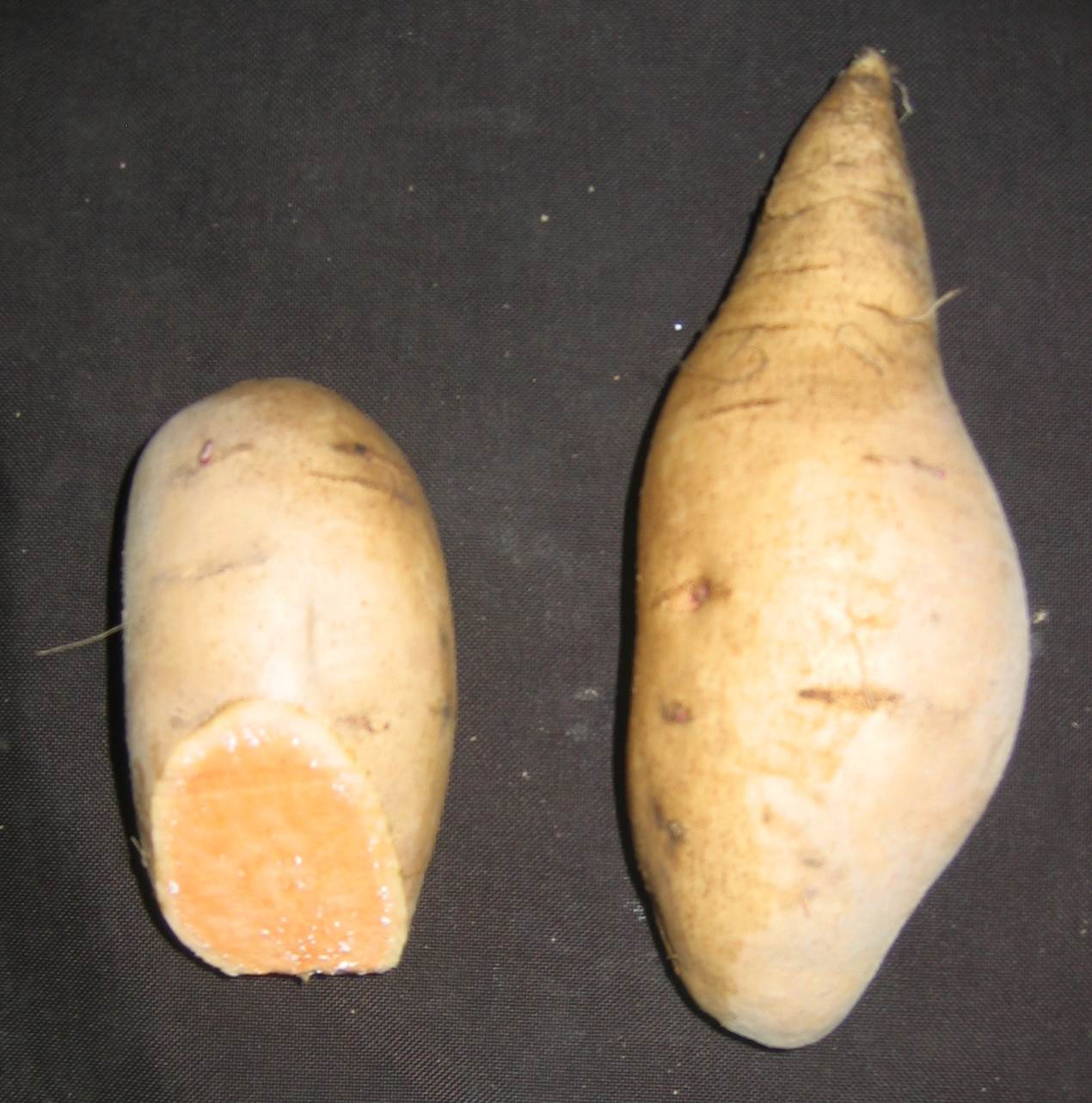 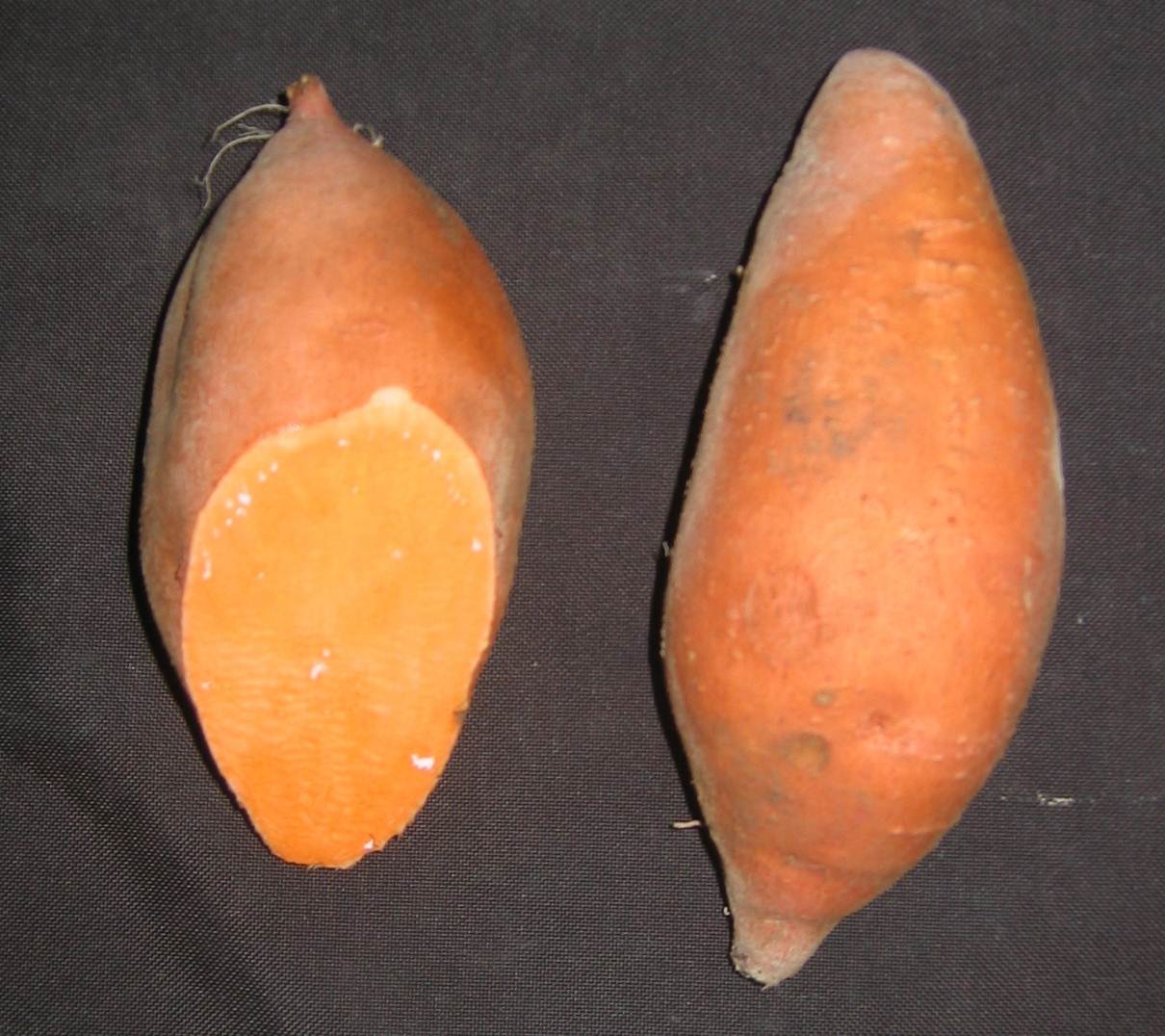 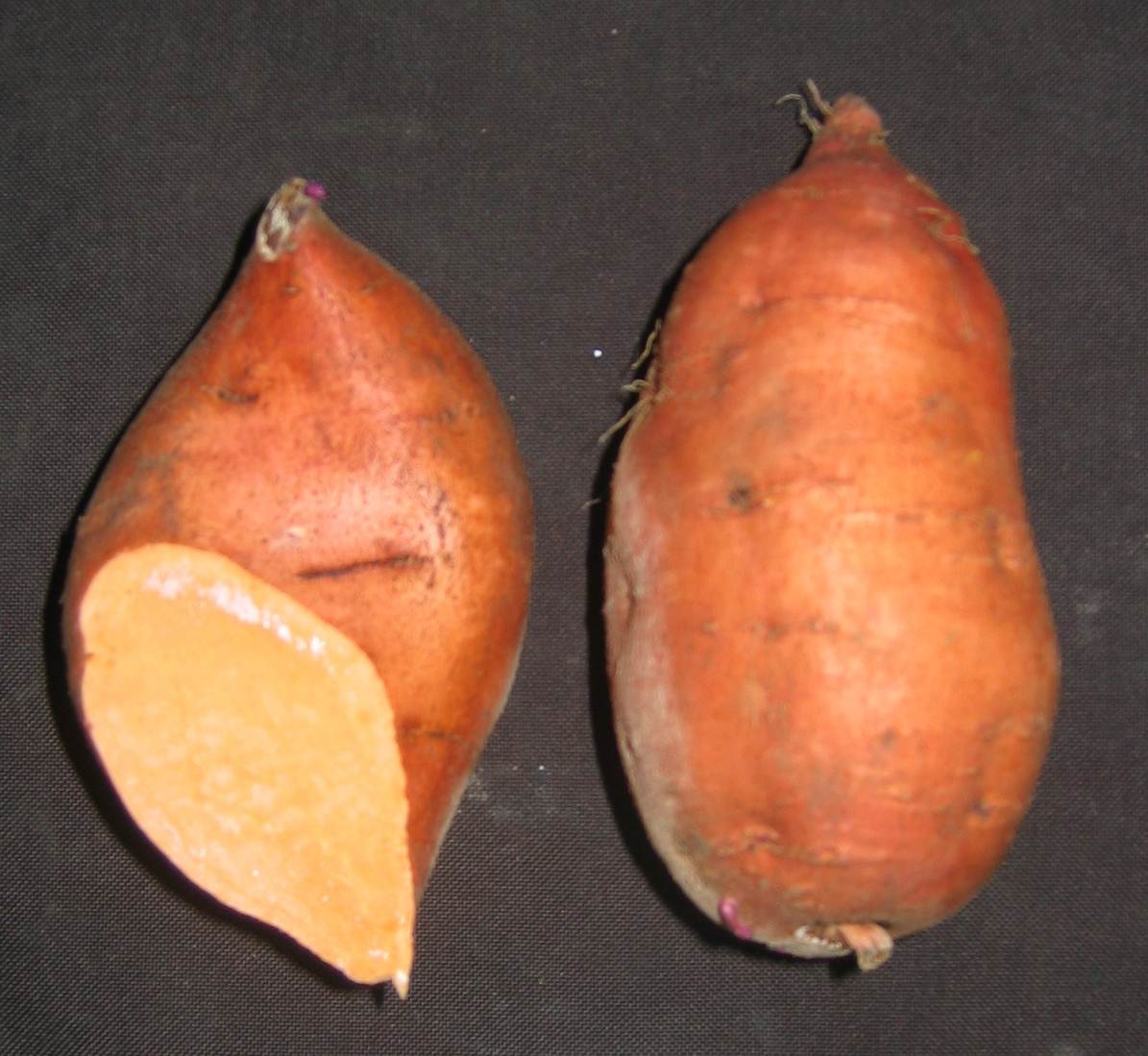 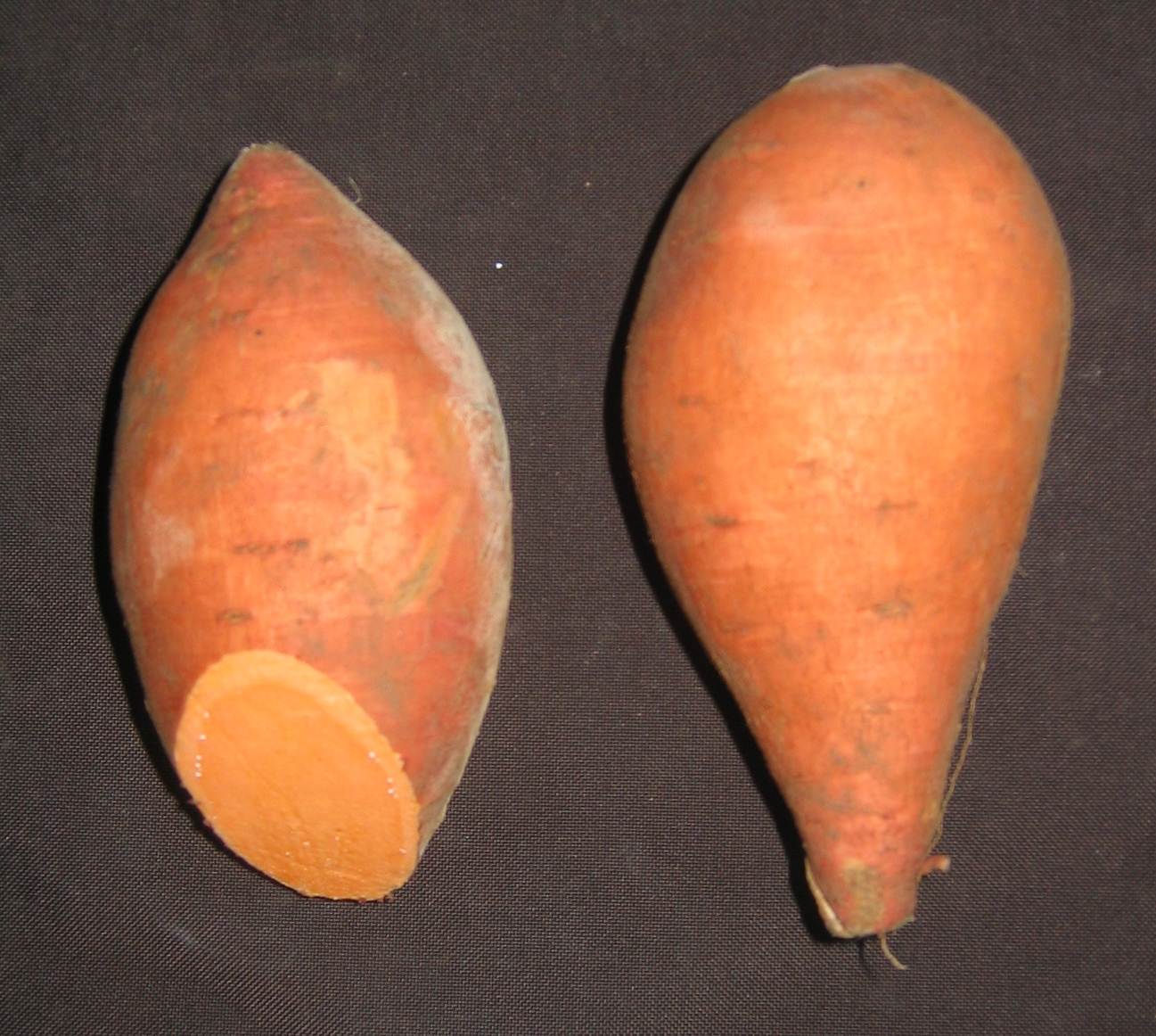 Root-knot nematode produces galls on feeder roots and either small bumps or cracks in storage roots, depending on the variety. This nematode is not as common a problem in sweetpotato fields as it once was and only occasionally are Beauregard roots found with the characteristic small bumps.

Fusarium wilt is caused by a fungus that can be both soil-borne and carried in ‘seed’. Most varieties with a rating of intermediate or resistant can be grown without any problems from Fusarium wilt. If a susceptible variety such as Heartogold or Porto Rico is grown in the same land for several years, plants may develop yellowing of older leaves, wilt and die during the growing season.

Bacterial root rot is caused by a bacterium that is carried in contaminated plants that are often symptomless. On susceptible varieties such as Beauregard, a rapid soft rot can quickly turn roots to mush if they are exposed to warm conditions with inadequate air exchange. Bacterial root rot is rarely seen on resistant varieties such as Porto Rico.

Rhizopus soft rot usually develops on cured roots when they are washed and packed for shipment. It causes a rapid soft rot and ‘whiskers’ of the causal fungus break out of the roots. The disease probably develops to some extent on all varieties but to a much greater incidence on susceptible varieties such as Hernandez than on resistant varieties such as Beauregard. Excessive damage to roots during packing or chilling damage to roots increases the susceptibility to this disease.1

Sclerotial blight is caused by a soil-borne fungus and causes wilting and death of plants in the plant bed. It develops to some extent on most varieties, but is more common on some such as Heartogold.2

Fusarium root rot is caused by a soil-borne fungus that infects wounds that occur during harvest. The disease often does not appear until late in storage. It is more common and more severe on susceptible varieties such as Travis and usually is not a problem in Louisiana on resistant varieties such as Beauregard.

1 Screening for Rhizopus soft rot did not begin until the mid-90’s. Old lines were not screened.

2 Resistance to Sclerotial blight is not screened, but observations are made on natural occurrence in beds. However, it is a very patchy disease in the field and it takes quite a while in large beds to get an impression on resistance.