Understanding of Growth Stages is Critical in Rice Production 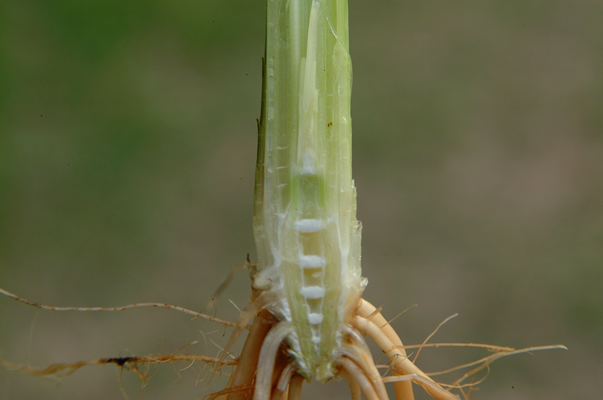 Several growth stages help identify critical periods during the life cycle of the rice crop. They are generally separated into the vegetative and reproductive phases or stages of growth. The vegetative phase occurs first and is associated with the six- to eight-week period following planting. The reproductive phase follows and is generally associated with the formation of the panicle and grain.

Seedling growth follows emergence and is usually denoted in stages by the number of leaf blades fully developed (1-leaf, 2-leaf, etc.). This can be confusing because growth is a continuous process. When a leaf has fully exerted, another is usually emerging, and it is tempting to consider the emerging leaf in the count. The emerging leaf should not be counted.

Seedling stages occur during the first two to five weeks after planting. As rice enters the 3- to 4-leaf stage, tiller formation can begin, initiating the tillering stages. Tillers (stools) appear as secondary shoots to the main shoot. Tillers are initiated at the base of the plant, emerging from the inside of the seedling leaves on the main shoot. The number of tillers is primarily determined by plant population, and tiller formation occurs over a two- to three-week period. Generally, a stand of 10 plants/sq ft will average two to four tillers per plant. When one tiller appears, the growth stage is the first tiller stage. Tillering stages are numbered according to the number of tillers present, and, generally, with a stand of 10 plants/sq ft, plants in the fourth tiller stage are common.

Panicle initiation is the first stage in the reproductive phase of growth and denotes the beginning of panicle formation. The developing panicle is microscopic in size inside the stem, and panicle initiation can usually be associated with the beginning of stem internode formation. As the internode elongation stage begins, a build-up of chlorophyll occurs between the nodes that are to separate in the process of forming the first stem internode between them. This accumulation of chlorophyll imparts a green color that encircles the developing internode, producing a green ring or band. Thus, the internode elongation stage is sometimes referred to as the green ring stage.

This stage is also referred to as first green ring because additional internodes that form on top of the first internode can also have the green ring effect as they begin to form. A total of five internodes can be produced in the formation of a stem of rice.

As internode and panicle formation continue, the panicle differentiation stage occurs. Panicle differentiation is the first stage in the reproductive phase when the newly forming panicle first becomes visible. At this stage, the panicle inside the stem has grown to approximately 1/8 inch in length. In the metric system, the length is approximately 2 mm, and the stage is sometimes referred to as the 2 mm panicle stage. The panicle continues to grow and develop inside the stem. As it does, the growth stage is referred to as booting and identified by the length of the panicle. When the panicle is up to 2 inches in length, the growth stage is early boot. Middle boot and late boot occur when the length of the panicle is 2 to 5 inches and 5 inches or greater, respectively.

Up to this point, identification of the growth stages in the reproductive phase requires the stem to be dissected (split in half). During late boot, the panicle develops completely, and the growth stages that follow occur after the panicle has exerted and is visible outside the stem. The heading stage is noted when a portion of a panicle is observed growing out of the end of a rice stem.

From this time forward, growth stages are based on the state of the panicle outside of the rice stem. Heading stages are identified by percentages, and the 50 percent heading stage occurs when 50 percent of rice stems are heading or headed (panicle completely emerged from the stem). The flowering and grain filling stages begin within one to five days after heading, and grain filling is complete within three weeks.

Knowing, understanding and identifying the growth stages of rice are critical in managing the rice crop. Most cultural management practices after planting are based on crop growth stages. Water management and agricultural chemical inputs must be properly timed to obtain optimum stands, tillering, and panicle and grain formation. The DD50 program for predicting rice growth involves identifying growth stages. Also, the effects of adverse weather conditions on the crop can be better understood and the resultant damage anticipated when there is an understanding of growth stages.

Note: For photographs of rice growth stages and a more detailed explanation of rice growth and development, contact your local county agent and request the latest version of the Louisiana Rice Production Handbook or view the handbook online here.

Permission granted May 15, 2012 by B. Leonareds (LA Farm & Ranch) to republish article on http://lsuagcenter.com.