Comparison of Pirogue (left plot) with Cocodrie (right plot) after flood up in October. 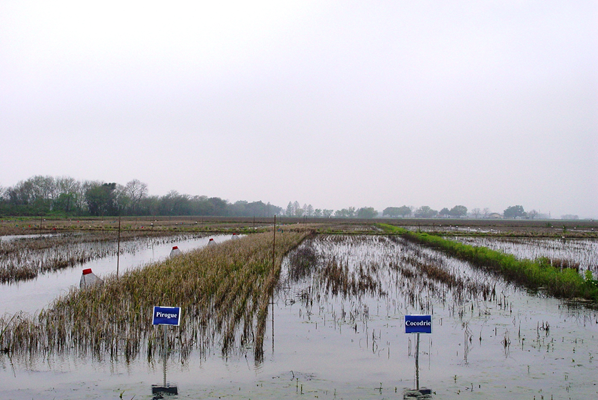 Comparison of Pirogue (left plot) with Cocodrie (right plot) near the end of the season (April). 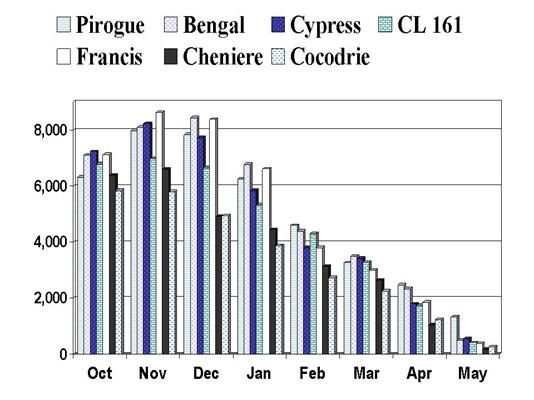 Total tonnage (lb/A dry weight), by month, for various rice varieties managed as a ratoon crop in experimental rice-crawfish rotational ponds. Total weight included all plant material, both living and dead, and of both vegetative and reproductive (when present) origin.

Questions are often asked about which rice variety is best to plant in crawfish ponds. Options available to farmers are usually dictated by the few varieties carried each year by seed companies.

With the exception of the new “crawfish specific” rice variety (‘Ecrevisse’) developed at the Rice Research Station, seed companies normally limit seed stock to a few of the most desirable commercial varieties, based on grain yielding and milling traits. Because improved rice varieties are continually forthcoming as a result of research and breeding programs, the variety selections normally carried by seed companies are continually changing. This makes it difficult, and impractical, to conduct long-term studies of the performance of specific rice varieties under different crawfish-growing conditions.

Nonetheless, in one recent study at the Rice Research Station, the forage traits of several current commercial varieties were compared in crawfish ponds following the rice harvest. Pirogue (short grain), Bengal (medium grain), Cypress (long grain), CL161 (long grain, Newpath-resistant), Francis (long grain), Cheniere (long grain) and Cocodrie (long grain) were managed for a ratoon forage crop in experimental crawfish ponds at the Rice Station. Although any of these varieties could also be planted during the summer for use strictly as a crawfish forage crop, Ecrevisse would be the best recommendation for that purpose. These varieties are planted primarily for their grain production but are commonly used in rice-crawfish rotational cropping strategies.

As seen in the figure there were few exceptional differences among the different varieties but some trends appear apparent. Francis produced the greatest tonnage of ratoon forage, and Cocodrie produced the lowest. Besides Francis, the top three for maximum ratoon forage production were Cypress, Bengal and Pirogue. Bengal reached its peak in December, whereas all others had peaked in November and were declining by December. More important than maximum forage production is perhaps forage quantity late in the season. This is often critical to continued growth and acceptable crawfish harvest size. Pirogue and Bengal seemed to have a slight edge in late-season forage tonnage. Pirogue was also observed to have the greatest amount of green regrowth after spring warming.

Overall, of those varieties tested, Cheniere and Cocodrie seemed to express the least desirable traits in the ratoon forage crop and Bengal and Pirogue seemed to have a slight edge over the long grains. Despite these seeming advantages and disadvantages in forage traits, it should be noted that differences in crawfish yield were not examined in this study. It should be further noted that management inputs, such as planting and harvesting date, amount and timing of fertilizer, and water management are likely to affect forage production (and potentially crawfish yields) far greater than variety selection. In conclusion, given the similar attributes of currently available rice varieties for rotational cropping systems, variety consideration for the crawfish production aspect should be considered only when other management inputs can be optimized.