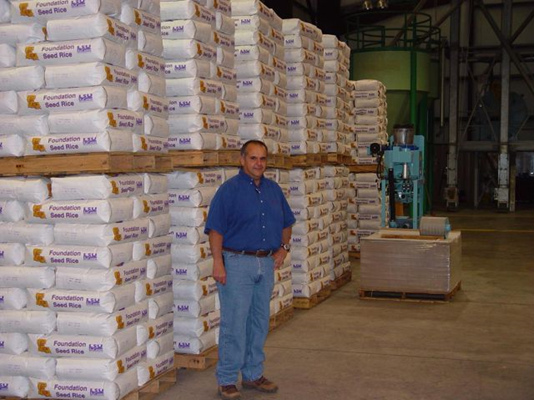 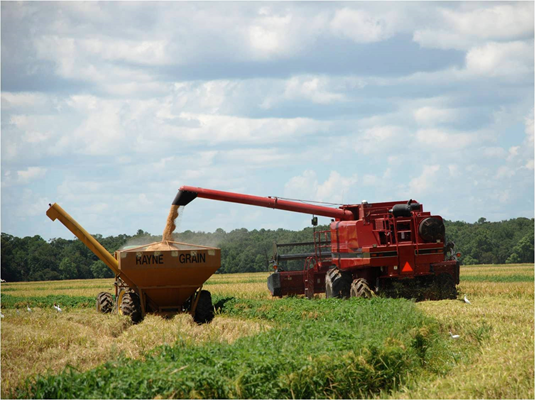 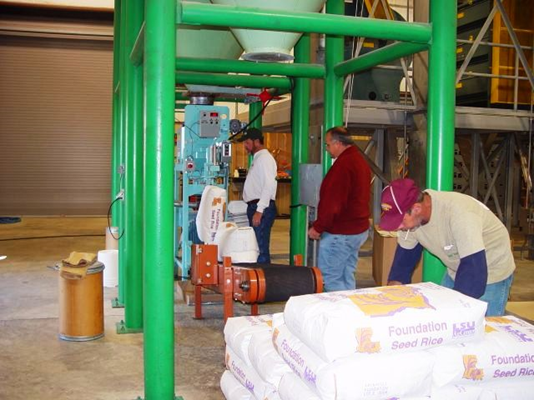 One of the most important functions of the LSU AgCenter’s Rice Research Station is the production of foundation rice seed. Foundation seed is the first step in the commercialization of a rice variety. This seed is purchased from the station by seed growers who plant it to produce registered seed. Registered seed is then planted to produce certified seed, which is the most common type of seed planted by rice growers to produce commercial rice. Each seed field in the state, regardless of class, must pass a two-stage inspection process required by the Louisiana Department of Agriculture and Forestry (LDAF).

The first step is the field inspection. Just before harvest, each seed field is thoroughly inspected by LDAF field inspectors, who walk the field looking for noxious weeds, off-types and other factors that might disqualify the field according to rice seed certification requirements. The second step is laboratory analysis of a representative sample of each seed lot. After each lot has been dried, processed and packaged for distribution, LDAF personnel will sample the packages to produce a representative sample that is sent to the state seed lab in Baton Rouge. There, the sample is subjected to a number of analyses to determine germination percentage, absence of red rice, purity, etc., again according to certification standards. Seed lots are also tested for the presence of transgenic traits. If a lot of seed passes this rigorous testing regime, seed tags are provided to be attached to the seed packages, indicating the seed has qualified to be sold as a class of certified seed.

The allocation of foundation rice seed is coordinated by the extension agent in each rice-producing parish. Foundation seed is allocated to Louisiana producers by a formula, based on the previous year’s rice acreage in each parish. Thus, if a certain rice-producing parish had 20 percent of the total rice acreage in the state in 2008, that parish will be allocated 20 percent of the foundation seed of each variety available in 2009. After these initial allocations are met in each parish, any remaining seed is allocated to producers whose requests were not met initially. If any seed remains after the requests of all Louisiana producers have been met, seed is then sold to out-of-state seed growers.

The production, harvesting and processing of this seed requires a meticulous approach at all stages to maintain quality and purity essential in a seed program. The program at the Rice Research Station is in the very capable hands of Mr. Larry White, who has been involved in the station’s seed program since 1980. Fields that will produce foundation seed are planted in the spring with specialized seed, which might be either headrow or breeder seed. Foundation seed fields are normally seeded at 40 pounds of seed per acre. This is somewhat below seeding rate recommendations for Louisiana rice production, and use of these lower rates is feasible because foundation seed production fields have been precision-leveled to facilitate water management, especially early season flushing and drainage. Also, these fields are seeded with a precision grain drill, which provides for uniform seed placement along the drill row as well as proper seeding depth.

After the seedlings have emerged, foundation fields are handled similarly to other rice fields, with special emphasis on timely fertilization, water management, as well as weed, insect and disease control. Of critical importance in seed production is roguing of the fields. This operation involves trained roguers walking across the field looking for off-types or variant plants different from plants of the specific variety being grown in that field. These plants are physically removed from the field to ensure their seed will not contaminate the foundation seed. Roguing usually starts as heads begin to emerge and will continue periodically until harvest maturity.

Foundation fields are harvested with commercial combines. These machines are then meticulously cleaned between varieties to make sure there is no cross-contamination of harvested seed. Harvested seed is brought into the station’s foundation seed facility, where it is dried then cleaned, processed and packaged into 50-pound bags for distribution to seed growers. At each of these steps in the foundation seed facility, extreme efforts are made to assure no seed is mixed. This requires careful cleaning of all handling and processing equipment when moving from the seed of one variety to another. The processing and packaging of seed is an ongoing process during the winter months at the Rice Station.

Limited amounts of foundation seed of the following varieties will be available for the 2009 season: Catahoula, Cheniere, Cocodrie, Cypress, Jupiter and Neptune. Also, the new jasmine experimental line (LA2125) will be available pending approval of its release. If you are interested in purchasing foundation seed or you would like additional information on the program, contact your local extension office or Mr. Larry White  by email or call 337-788-7531.

Permission granted by B. Leonards (LA Farm & Ranch) on December 11,2008 to republish article on www.lsuagcenter.com