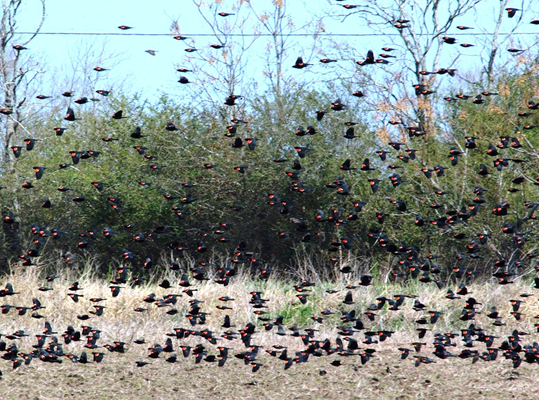 Blackbirds can cause significant levels of damage to the Louisiana rice crop, both at seeding and as the crop approaches harvest maturity. Several species of blackbirds are responsible for damage to rice crops, particularly red-winged blackbirds (Agelaius phoeniceus), common grackles (Quiscalus quiscula) and brown-headed cowbirds (Molothrus ater). Brown-headed cowbirds also are responsible for destroying tremendous numbers of songbirds by laying their eggs in the songbird’s nest. In the spring, blackbirds consume seed and pull seedlings from the ground. This damage is sometimes severe enough to require replanting of fields. In the summer and fall as grain is ripening, blackbirds eat rice in the milk, dough and hard-grain stages of development and can cause significant reductions in yield. Damage to rice by blackbirds tends to be localized and most severe in fields planted in close proximity to blackbird roosting areas. Timings of planting and harvest also are closely related to blackbird damage. Early-seeded fields are most likely to receive damage as are fields harvested later. This is because damage is caused by both resident and migrant blackbirds, and migrant birds reach peak numbers from fall through early spring.

Rice is planted in three basic ways: water-seeded (dry or pre-sprouted seed dropped into a flooded field), drill-seeded (planted with a drill on 7- to 10-inch rows) or broadcast dry (broadcast on a dry seedbed by either ground equipment or airplane). Location and farm practices usually dictate the type of seeding. Regardless of the seeding system used, the optimum stand is 10-15 plants per square foot; the minimum stand is six to eight plants per square foot. Typically, rice seeding rates provide for many more seed per square foot than the minimum number of seedlings needed because there are numerous factors that can negatively affect stand establishment. These include seedling disease, seed drift in water-seeding, insect damage and others. Add black bird depredation into the equation and production losses can be substantial. Blackbirds will consume seeded rice once it has been planted all the way until the plant is about 2 inches tall. Research has estimated that 500 blackbirds can destroy an acre of newly seeded rice per day. In the ripening crop, blackbird damage usually starts to occur when rice reaches the milk stage of growth (the endosperm is beginning to develop) and continues until the rice is harvested from the field. In Louisiana, the rice growing season is long enough so that rice farmers can grow two crops of rice, the main crop and a ratoon crop that develops vegetatively from the stubble remaining after the main crop harvest. Blackbird damage is generally greater in the ratoon crop, which is harvested in November when large flocks of migratory birds are present. Blackbird depredation on rice has always been a difficult problem to solve. Harassing birds from fields using pyrotechnics and live ammunition is only moderately effective in reducing the damage.

For the past 20 plus years, a program has been implemented to reduce blackbird numbers prior to and during the planting season. This program is a cooperative effort between the USDA Wildlife Services Agency, the Louisiana Department of Ag and Forestry, the LSU AgCenter and the Louisiana Rice Growers Association. The program is based on baiting blackbirds near roosting areas using a blackbird toxicant product called DRC 1339. The bait is applied under the supervision of USDA/Wildlife Services personnel trained in pest bird management procedures. The program will run from mid-February through late March, depending on bird numbers.

Another approach to blackbird management in the seeded crop is through the use of a seed treatment bird repellent. Through the years, the Rice Research Station scientists have worked with other scientists on several promising blackbird repellents. One of these, AV-1011 (active ingredient anthraquinone), has been used as a seed treatment over the past four growing seasons under a Section 18 registration. The repellent works well, and work is continuing to have this product fully labeled under a Section 3 registration, hopefully by the 2016 planting season. However, to again use this product in the upcoming planting season, it will be necessary for the EPA to again grant a Section 18 emergency use registration or approve a 24-C special local needs registration. The Louisiana Department of Ag and Forestry is currently diligently pursuing a label that will allow for the use of AV-1011 again this year.

This project was partially supported by USDA National Institute of Food and Agriculture.