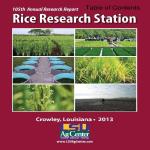 The research at the Rice Research Station, Crowley, Louisiana, is conducted by scientists with the LSU AgCenter’s Louisiana Agricultural Experiment Station. The 2013 rice research program included breeding/variety development, biotechnology, variety testing, fertilization, soil and water management, cultural practices, weed control, insect control, and disease investigations. Crops grown in rotation with rice were evaluated relative to increasing the efficiency of land use. The aquaculture research program places emphasis upon production practices, forages, and multi-cropping of crawfish with agronomic crops. Another important area of work is the production and distribution of foundation seed. The Rice Research Station also conducts research studies in improving species for coastal restoration. In addition, the statewide rice extension agronomist conducts numerous educational programs from the Rice Research Station. Although most research work was performed by members of the Rice Station faculty, several faculty members from the Baton Rouge campus conducted research at this station.

In addition to research responsibilities of the Rice Research Station, faculty and cooperators, a large number of farmers, extension personnel and others, were trained and otherwise contacted during 2013. Approximately 500 people attended the annual Rice Research Station field day to view plots and participate in discussions of research findings. Field days also were conducted in Evangeline, Jefferson Davis, Richland, and Vermilion parishes. In addition, the faculty participated in industry meetings, both on and off the station, and worked individually with farmers and others in solving immediate problems. Several thousand people received services from the Rice Research Station during 2013.

Projects at this station are conducted under the supervision of research scientists from the Rice Research Station and also by cooperating personnel from certain departments of the Louisiana Agricultural Experiment Station. Following the reports, station personnel and cooperators in 2013 are listed.
7/9/2014 11:28:41 PM
Rate This Article: