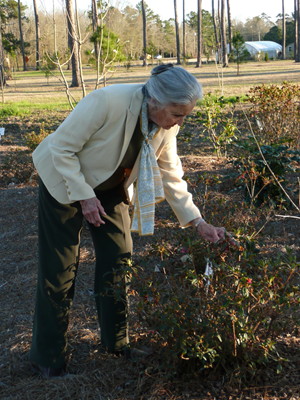 Margie Jenkins in the Garden 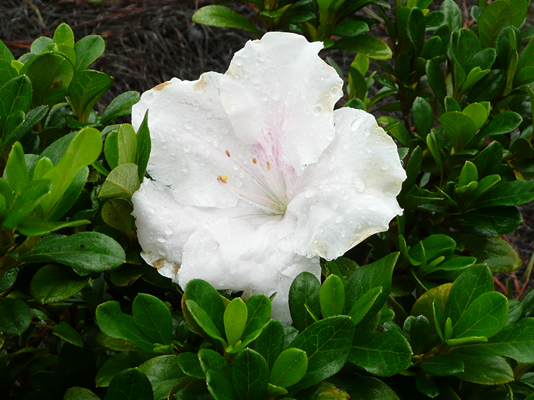 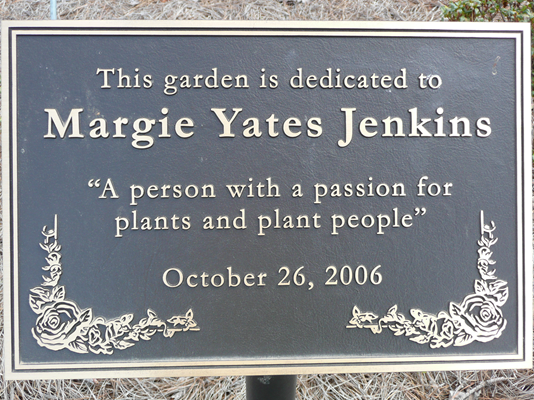 Plaque at entrance of the Margie Jenkins Garden

Few among us have the national contacts and recognition or the huge circle of friends, family and admirers that Ms. Margie has.

“We wanted to do something to celebrate the many contributions this dynamic woman has made to horticulture, the green industry, and to the personal development and education of so many horticulturists,” said Dr. Regina Bracy, professor and resident coordinator at the station. “So in 2006, we threw a Garden Party for Ms. Margie and collected $53,000 for the establishment and maintenance of the Margie Y. Jenkins Azalea Garden."

The garden started in a “straw stand” of pines. Straw stand refers to the small tracts of pine trees that bordered strawberry fields in the area over 50 years ago. The stands were so named because they served the purpose of providing the pine straw that was used to mulch the strawberry crop.

Dr. Neil Odenwald, Louisiana State University professor emeritus and co-author of “Southern Plants,” was commissioned to design the garden layout. He laid out beds that curled and curved around the pine trees and envisioned walkways, water features and resting areas nestled under the shade of the tall trees. Staff at the Hammond Research Station began marking out the garden design, installing irrigation lines, hauling soil amendment and preparing the beds.

In September 2006, the first azaleas were planted in the garden. Ms. Margie selected the first group to be planted, and of course, these were her favorite Robin Hill cultivars of which she selected 13. Also included in this first planting were 23 cultivars of Encore azaleas, a nod to the other plant aficionado and breeder from Southeast Louisiana, Robert “Buddy” Lee. Later the Crimson azaleas (Majesty, Queen and Princess) developed by another Louisianan, Richard Odom, Country Pines Nursery, were added to the garden. The size of the garden was doubled in 2007 with the addition of Southern Indian azaleas.

As most people who know Ms. Margie know, her love of plants is not limited to azaleas. Visitors to Jenkins Nursery are often treated to “the tour,” a ride in the golf cart with Ms. Margie. Here the visitor can appreciate Ms. Margie’s extensive knowledge of native plants while viewing an amazing collection of those plants. Ms. Margie also is known for her generous sharing of her plants, and most visitors leave with at least one interesting specimen.

Spotlighted around a sugar kettle is Ms. Margie’s white azalea selection Freddie. Also one can find nestled among the azaleas such interesting plants as Leucothoe axaillaris Jenkins, named after it’s founder, Ms. Margie.

The Margie Y. Jenkins Azalea Garden is a young garden with a great future. It will be an integral part of the new Landscape Horticulture Research and Extension Center being developed at the LSU AgCenter’s Hammond Research Station. The plaque at the entrance to the garden best sums up the person for whom the garden was named. “Margie Y. Jenkins… A person with a passion for plants and plant people.” With the establishment of this garden, we will have a continuing feature that will educate people about azaleas and native plants. This garden will be a source of information, an inspiration, a delight to visit… much as Ms. Margie is and has been during her lifetime.