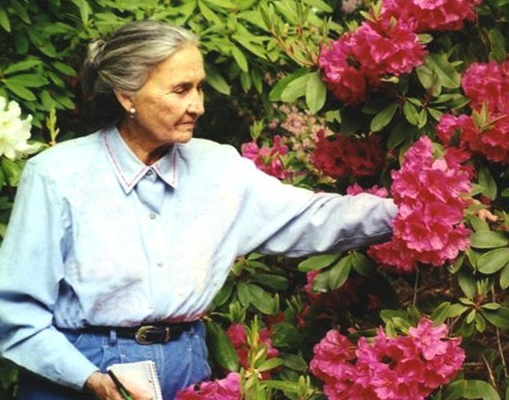 Margie Jenkins among the azaleas

In the beginning… there was chatter among friends.

An idea was born. Regina Bracy was building a new program at the Hammond Research Station. Buddy Lee was searching for a suitable tribute. Perfect, said Buddy, a garden in honor of Ms. Margie.

Her friends were enthused. Ms. Margie was hesitant… "I’m not noteworthy," she said. But we thought otherwise, so after much convincing, Ms. Margie agreed to lend her name to the garden.

So a Garden Party was planned, and all Ms. Margie’s friends were invited. If we ask, they will give. If we build it, they will come. And so they did....

The establishment of the Margie Y. Jenkins Azalea Garden means we will have a continuing feature at the Hammond Research Station to honor a remarkable woman. This garden will be a source of information, an inspiration, a delight to visit….much as Ms. Margie is and has been during her lifetime.

Margie Yates Jenkins has always enjoyed “growing things.” Her mother would leave a spot in the vegetable garden so the young Margie could plant a few seeds herself. Margie felt such pride when she could pick a few beans of her own to put in the family's bucket. Margie’s husband, Bryant Jenkins, operated a dairy farm and grew watermelons for most of his life. After her four children (Freddie, Margie Ann, Timothy, Jeffery and Mark) entered school, she and Bryant started a small growing operation in the early 1960s and continued it for next 15 years.

While attending Louisiana State University, Margie Ann (Ms. Margie’s daughter) heard about a summer course taught by Dr. Neil Odenwald, LSU professor emeritus and book author. The course was aimed at extension workers, county agents and others who were interested in design and design theory. Margie Ann persuaded her mother to take the course, which completely changed Margie's thinking about plants. "When I came back, that was my goal," she said, "To grow things that were unusual. Of course, a lot of the old plants, too, I wanted to grow -- and of course, natives."

In 1977 Ms. Margie at the age of 56 was ready to take on the challenge of reopening the nursery to grow different types of plants. She hired six workers with the dairy paying their salaries, so she did not have to borrow any money to start the nursery. After talking with many of the big wholesalers around Folsom, Margie found that none of them were catering to customers in New Orleans or to the small contractor who was supplying the New Orleans landscape market. She decided that this was her niche: "the guys in the pickup trucks."

Azalea production in the southeastern United States in the 70s had focused on the Southern Indian, Kurume and a couple of Glenn Dale varieties of azaleas. As Ms. Margie was active in national azalea meetings, she knew of the hardier varieties grown as far north as New York. Always a seeker of new and interesting plants, she bought rooted cuttings of several varieties of Robin Hill azaleas and other hybrid groups and put them in production at her nursery. Now in any process of discovery, there is a wild card. For Ms. Margie, it was the cold blast that the area received in the winter of 1983.

Southern azaleas suffered tremendous damage during the winter of ’83, but the hardiness of these "new" varieties was demonstrated. This cold hardiness and the off-season blooming habit that Ms. Margie later observed convinced her to propagate and expand these new azaleas. Names like Arabesk, Watchet, Janet Rhea, Hardy Gardenia that were on a Jenkins Nursery liner receipt in 1981 are now stock-in-trade items of Southern nurseries.

When the Azalea Society of America conferred its Distinguished Service Award on Margie Jenkins in 2007, the tribute acknowledged “the increased use of Robin Hill azalea cultivars and other azalea hybrid groups in the southeastern United States can be attributed to (Ms. Margie’s) interest in growing and distributing these plants prior to other wholesale producers.”

Today she still watches her crops with the eye for discovery that had her notice a sport of Watchet. She isolated and propagated this white sport and named it Freddy in on honor of her son. Freddy is on the cover of the The Azalean Winter 2006 issue.