Hydrangeas for Shade and Sun

Over the past several years hydrangeas have seen a resurgence in popularity. I believe the reason is because of newly developed varieties that expand the flower’s color range, varieties that have an extended bloom period or bloom later in the season, and plants that grow in full sun landscapes.

The hydrangea genus is comprised of flowering shrubs, small trees and climbing vines. Five of the eleven deciduous species grow in the Gulf South along with two evergreen self-supporting climbers. The hydrangeas we can grow are H. macrophylla, H. serrata, H. quercifolia, H. paniculata, and H. arborescens. The seldom seen vining relatives are Decumaria and Schizophragma.

The most familiar flower shape is the ball shaped “mophead” form of H. macrophylla. The colorful flowers are actually modified leaves called sepals which completely hide the much smaller, less showy fertile flowers. Varieties include: ‘Endless Summer’, ‘Pia’, ‘Alpenglow’, and ‘Nikko Blue’. The “lacecap” version of H. macrophylla and H. serrata prominently displays its small fertile flowers in the center of the head surrounded by the much larger colorful sepals. Varieties of “lacecap” include ‘Lady in Red’, Mariesii Variegata’, and ‘Blue wave’. Varieties of H. serrata include: ‘Bluebird’, ‘Preziosa’, and ‘Tokyo Delight’. The third type of hydrangea flower is the panicle, broad at the base and tapering as it extends towards the top. This form is typical of H. paniculata and H. quercifolia. Locate hydrangeas in a spot where they receive some shade during the day. A shady (two hours of direct sun) or partly shaded (about four hours of direct sun) bed is ideal. Avoid hot, sunny, dry areas or beds that are baked by the afternoon sun. Morning sun is much preferred by these plants, so an eastern exposure is excellent. The exceptions are H. paniculata prefers a sunny garden and H. arborescens prefers light shade.

Hydrangeas do best in beds that have been amended with generous amounts of organic matter, such as compost, rotted manure or peat moss. Dig in a two to four inch layer of organic matter during bed preparation. The organic matter helps retain moisture in the soil. Once planted, hydrangeas must be kept well watered. Water them deeply and thoroughly two or three times a week while they get established and once or twice a week later on if the weather is dry. Hydrangeas also benefit from a two to three inch layer of mulch, such as leaves, pine straw or pine bark, over their root system to help maintain moist soil.

The flower heads of hydrangeas are rather unique. Depending on how acid or alkaline the soil the plant is growing in, the sepals can be different colors. If you have pink hydrangeas and you want them to be blue, treat the soil around the bushes with aluminum sulfate in March and again in October each year. Soil pH level of 5.5 to 6.0 will develop the most intense shades of blue, purple and lilac. Gradually, over time, the flower heads will completely shift color.

If your hydrangeas are blue and you want them to be pink, treat the soil around the bushes with lime and possibly superphosphate following the same schedule. Your soil sample results should show a soil pH of 7.0 to 8.5 for most intense pink to red color. It may take a couple of years to be fully effective. The intensity of the color is controlled by genetics and depends on the variety you are growing. White hydrangeas do not have pigment in their sepals and are white regardless of the soil pH.

When the colorful flower heads turn green, it signals the ideal time to prune your plants. First, cut off the faded flower heads along with about four to six inches of stem. If you’re trying to reduce the size of your bush, cut the heads with longer stems. If there are any especially tall shoots, or if you need to cut the whole bush back to reduce its size, you may continue to cut back shoots to achieve the desired results. Pruning stimulates new growth, creating a fuller, shapelier bush. This type of pruning must be done by the end of July. Most of the varieties of the hydrangea species (quercifolia, macrophylla and serrata) set their flower buds for the next year in late summer, so any pruning after that removes the flower buds and reduces or eliminates flowers for the next year. There are some reblooming varieties of H. serrata and macrophylla, like ‘Endless Summer’ which blooms on both new and old wood, resulting in an extended blooming season.

Prune H. arborescens and paniculata annually in late winter before new growth appears. It’s best to cut H. arborescens stems close to the ground which results in strong stems to support its immense flower heads. Varieties include: ‘Annabelle’ and ‘Hayes’ Starburst’. Pruning H. paniculata near the ground maintains a dense flowering shrub and stems less likely to snap in a thunderstorm when loaded with flowers. Varieties include: ‘Tardiva’, ‘Unique’, ‘Pink Diamond’, and ‘Limelight’.

Don’t forget our native oak leaf hydrangea. With its large, pointed cones of white flowers that age to dusty rose and its dark green, attractive leaves, it also deserves consideration for shady areas of your landscape. Larger-growing than standard hydrangeas (it will grow up to six feet), oak leaf hydrangeas are also deciduous and have the added attraction of orange-to-burgundy fall color. Of all the hydrangeas grown this type proves the most difficult to grow and establish in the landscape. It demands a well drained soil. Varieties include: ‘Dayspring’, ‘Snow Queen’, ‘Sikes Dwarf’, ‘Semmes Beauty’, and ‘Snowflake’. 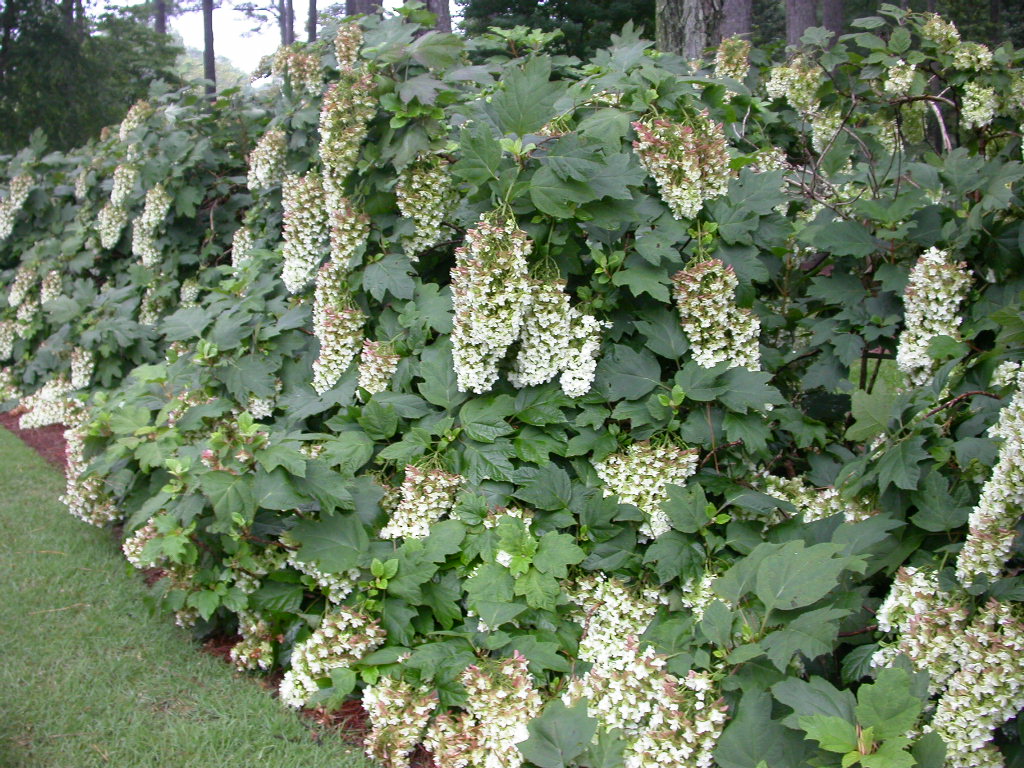 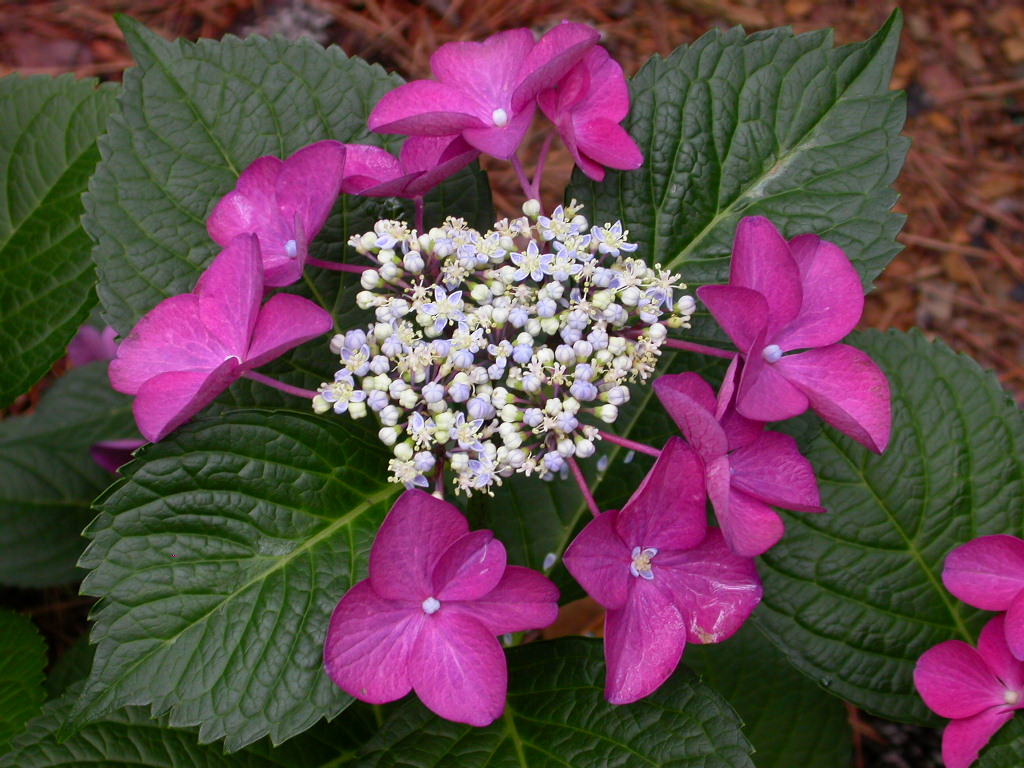 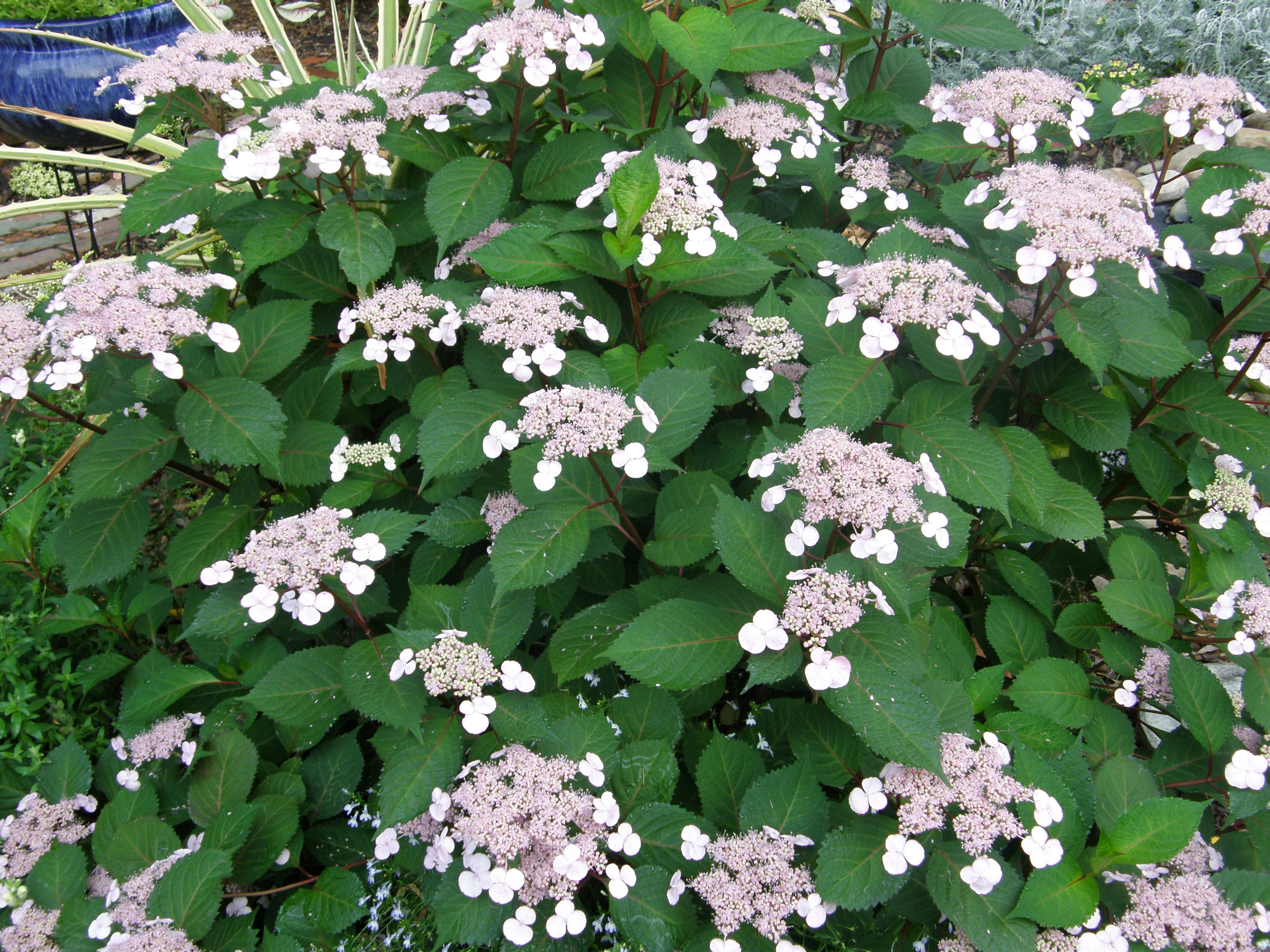 The lacecap ‘Lady in Red’ derives its name from the red coloration of stems, petioles and leaf veins and the burgundy rose flowers that hang downward as it ages.