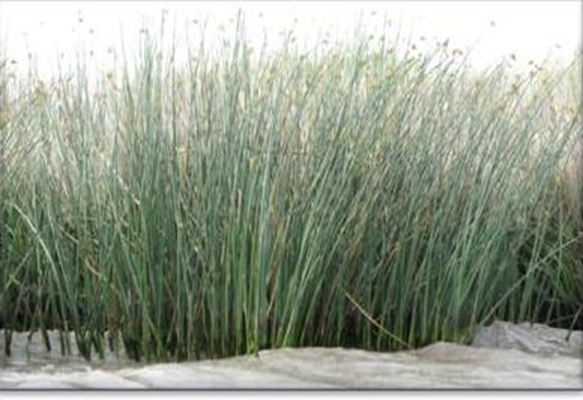 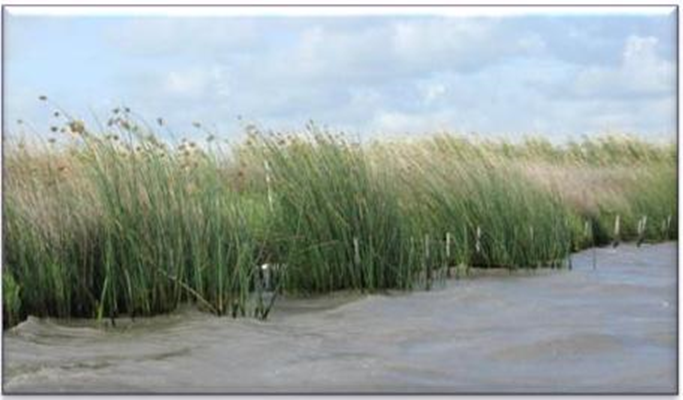 As a part of LSU AgCenter Coastal Plant Development program, the Rice Research Station through its coastal plants project has conducted marsh plant research for a number of years. Breeding efforts, genomics and tissue culture are being used to improve coastal marsh plants.

Research in smooth cordgrass (Spartina alterniflora) currently being conducted at the Rice Research Station includes the development of seed-based propagation technology. A large production of S. alterniflora seed under a managed environment will provide a steady supply of S. alterniflora seed required for a large-scale revegetation. Seed can be aerially seeded, and aerial revegetation can be targeted quickly and economically to reach marsh interiors most affected by erosion. This method of revegetation can be used not only to restore coastal marshes but also to maintain the health and sustainability of the entire saltmarsh systems. Through aerial seeding, hundreds of acres can be planted in a day at a fraction of the cost of current planting practices. To establish seed-based propagation technology, cultural practices, seed production, methods of harvest, seed storage and direct seeding applications are being studied using a polycross population consisting of 13 high-seed-producing lines. Mechanical harvest, such as using a Flail-Vac-Seed stripper/harvester, is being evaluated to facilitate mechanical harvest as part of a midterm plan toward a commercial cultivation of smooth cordgrass. S. alterniflora could be an alternative agricultural crop in some areas. This plant has the ability to tolerate a wide range of salinities, from sea strength to freshwater. Populations of s.alternifora have been cultivated and maintained under freshwater conditions at several research institutions for years and have performed consistently well. Since S. alterniflora can be cultivated in a broad range of salinity environments, large-scale commercial seed production is highly probable and could be an adjunct to aquatic crops, such as rice, with little modification to existing equipment or land. Due to increasing salt contamination of inland groundwater, many areas historically used for rice production have been abandoned, thus providing opportunity for S. alterniflora production as an alternative crop.

In recent years, ecological considerations have been increasingly emphasized in coastal erosion control and wetlands restoration. Genetic diversity is one of the most debated issues. Therefore, in addition to the main goal of controlling coastal erosion through rapid establishment of S. alterniflora populations, efforts have been directed toward preserving genetic diversity in the target areas and subsequently restoring ecosystem functions and processes. By maintaining genetic balance, the risks of restoration in the form of strong founder effects, genetic swamping and genetic divergence can be avoided. Maintaining natural genetic diversity was one of the critical components in our breeding efforts to improve S. alterniflora. It has been widely accepted that a better understanding of genetic diversity, population structure and distribution of natural gene pools increases the likelihood of success in developing self-sustaining populations with long-term viability. DNA markers were used to characterize genetic diversity and population genetic structure of natural population of smooth cordgrass in Louisiana. Marker analysis suggests that genetic similarities among basin groups were high and genetic diversity within basin groups was roughly equal. Therefore, selected genotypes representing core genotypes within basins can be used to maintain the overall existing genetic diversity within Louisiana habitat.


Click here to see the geographical distribution of S. alterniflora.

California bulrush is a perennial deepwater plant species with an extensive network of rhizomes to form dense colonies. The above-ground stems can provide a natural barrier by dissipating wave energy to provide calmer environments that enhance the establishment of other vegetation along shorelines. Native to Louisiana, California bulrush can be found in marshes, swamps, seeps, washes and floodplains, along lake and stream margins, and in wet meadows. It is highly suitable for stabilizing newly created marshes and terraces, as well as rehabilitating highly impacted and disturbed sites. Its seed and above-ground structure provide favorable habitat for wildlife, including some endangered species.

Both conventional breeding and biotechnology approaches are being used to improve California bulrush (Schoenoplectus californicus). Multi-year replicated trials were conducted at the Rice Research Station to select promising bulrush lines from 48 accessions collected from marshes across Louisiana. Currently the promising lines are being evaluated in multi-location trials for potential releases.

Since natural variation found in California bulrush does not provide preferable levels of salt-tolerance, novel plants need to be developed. In an attempt to improve salt-tolerance, parts of actively growing flowers from one of the most-tolerant lines were used to produce callus cultures on media containing growth regulators. This produced millions of break-free individual cells. Under appropriate laboratory conditions, these individual cells will be capable of self-regeneration into whole plants. Using this approach, what would require thousands of acres to grow millions of plants in a typical farm setting can substantially be reduced into laboratory-size Petri dishes. The cellular selection using millions of cells has yielded hundreds of lines with improved levels of salt tolerance. Further salt-tolerant evaluation is being conducted. 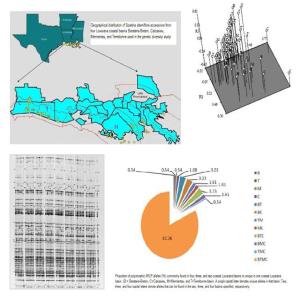 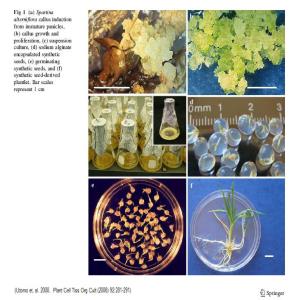