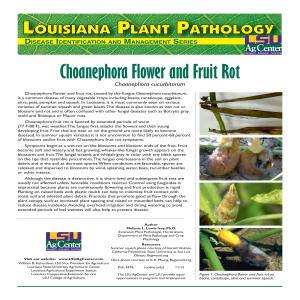 Choanephora flower and fruit rot, caused by the fungus Choanephora cucurbitarum, is a common disease of many vegetable crops including squash, cantaloupe, pumpkin, peas, beans, and okra. In Louisiana, it is most commonly seen on various varieties of summer squash and green beans. The disease is also known as wet rot or blossom end rot and is often confused with other fungal diseases such as Botrytis gray mold and Rhizopus or Mucor rots.

Choanephora fruit rot is favored by extended periods of warm (77°-80°F), wet weather. The fungus first attacks the flowers and then young developing fruit. Fruit that are near or on the ground are more likely to become diseased. In summer squash varieties it is not uncommon to find 50%-60% of blossoms and/or fruit with Choanephora fruit rot symptoms.

Symptoms begin as wet rot of blossoms and the blossom end of the fruit. Fruit become soft and watery and fast growing, whisker-like fungal growth appears on the blossoms and fruit. The fungal strands are whitish-gray in color with tiny black spores on the tips that resemble pincushions. The fungus overseasons in the soil on plant debris and in the soil as dormant spores. When conditions are favorable, spores are released and dispersed to blossoms by wind, splashing water, bees, cucumber beetles or other insects.

Although the disease is destructive, it is short-lived and subsequent fruit sets are usually not affected unless favorable conditions reoccur. Control using fungicides is impractical because plants are continuously flowering and fruit production is rapid. Planting on raised beds with plastic mulch can help to minimize fruit contact with moist soil and infested plant debris. Practices that promote good airflow through the plant canopy such as increased plant spacing, and raised or mounded beds can help to reduce disease incidence. Avoiding overhead irrigation and timing watering to avoid extended periods of leaf wetness will also help to prevent disease.