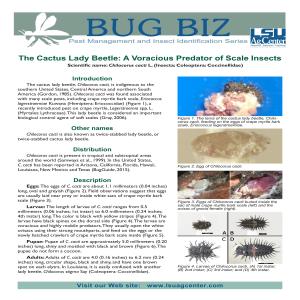 Chilocorus cacti is present in tropical and subtropical areas around the world (Samways et al., 1999). In the United States, C. cacti has been reported in Arizona, California, Florida, Hawaii, Louisiana, New Mexico and Texas (BugGuide, 2015).

Eggs: The eggs of C. cacti are about 1.1 millimeters (0.04 inches) long, oval and greyish (Figure 2). Field observations suggest that eggs are usually laid near prey or inside white sacs of crape myrtle bark scale (Figure 3).

Larvae: The length of larvae of C. cacti ranges from 0.5 millimeters (0.06 inches; 1st instar) to 6.0 millimeters (0.24 inches; 4th instar) long. The color is black with yellow stripes (Figure 4). The larvae have black spines on the dorsal side (Figure 4). The larvae are voracious and highly mobile predators. They usually open the white ovisacs using their strong mouthparts, and feed on the eggs or the newly hatched crawlers of crape myrtle bark scale inside (Figure 5).

Adults: Adults of C. cacti are 4.0 (0.16 inches) to 6.2 mm (0.24 inches) long, circular shape, black and shiny, and have one brown spot on each elytra. In Louisiana, it is easily confused with another lady beetle, Chilocorus stigma Say (Coleoptera: Coccinellidae). Both lady beetles can be found on crape myrtle plants infested with the crape myrtle bark scale and crape myrtle aphid, Tinocallis kahawaluokalani (Kirkaldy) (Hemiptera: Aphididae). Chilocorus cacti usually has larger brown spots on the elytra than C. stigma (Figure 7). Another distinction of these two lady beetles is the color of the ventral side of the thorax: dark brown in C. cacti, but black in C. stigma (Figure 7). Male and female C. cacti look alike (Figure 8).

The life cycle of C. cacti consists of egg, larva, pupa and adult. Adults can live from two to five weeks. First instars hatch from eggs in about 10 days at 25 C (77 F) and start feeding on nearby prey. Under laboratory conditions at 25 C, the larval stage of C. cacti, from 1st to 4th instar, is about 17 days. The pupa lives for another 13 days. Although this lady beetle was used as biological control agent, its biology is still unclear. A laboratory study suggested that C. cacti can survive 41 C (106 F) for as long as 50 hours (Hattinghl and Samways, 1994), which means this lady beetle could be adapted to the high summer temperatures present in southern United States.

No natural enemies to this lady beetle are found in the United States, perhaps because of its color and/or bad taste to most predators. The brown and black color can be a warning related to toxicity (Gray, 2006). This lady beetle has a defensive substance in the blood (Shi et al., 1995), which has a repulsive smell that can fend off its predators including small birds and lizards (Gray, 2006).

Use in Biological Control

In Louisiana, C. cacti have been found feeding on the crape myrtle bark scale (Wang et al., 2015). Larvae and adults of this lady beetle prey on scale eggs and nymphs. In the laboratory, 4th instars can feed about 400 scale eggs in 24 hours. This lady beetle has higher feeding rates than other Chilocorus lady beetles under the same temperature (Hattinghl and Samways, 1994).

Several approaches can be used to enhance the presence of C. cacti in the landscapes. First, use insecticides with low toxicity to manage the crape myrtle bark scale. Second, insecticides can be applied during the time of year when lady beetles are less abundant such as winter. Additionally, planting flowering plants can provide pollen as an alternative food to attract this lady beetle or prolong its activity in the landscapes.

Hattinghl, V., and M. J. Samways. 1994. Physiological and behavioral characteristics of Chilocorus spp. (Coleoptera: Coccinellidae) in the laboratory relative to effectiveness in the field as biocontrol agents. J. Econ. Entomol. 87:31-38.