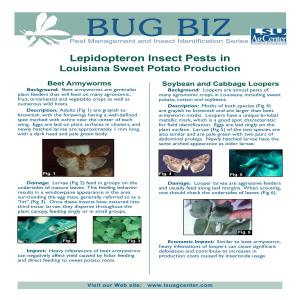 Background: Beet armyworms are generalist plant feeders that will feed on many agronomic, fruit, ornamental and vegetable crops as well as numerous wild hosts.

Description: Adults (Fig 1) are grayish to brownish, with the forewings having a well-defined spot marked with ochre near the center of each wing. Eggs are laid on plant surfaces in clusters, and newly hatched larvae are approximately 1 mm long, with a dark head and pale green body.

Damage: Larvae (Fig 2) feed in groups on the undersides of mature leaves. This feeding behavior results in a windowpane appearance in the area surrounding the egg mass, generally referred to as a “hit” (Fig 3). Once these insects have matured into third-instar larvae, they disperse throughout the plant canopy, feeding singly or in small groups.

Background: Loopers are annual pests of many agronomic crops in , including sweet potato, cotton and soybeans.

Description: Moths of both species (Fig 4) are grayish to brownish and are larger than beet armyworm moths. Loopers have a unique bi-lobal metallic mark, which is a good spot characteristic for field identification. Eggs are laid singly on the plant surface. Larvae (Fig 5) of the two species are also similar and are pale green with two pairs of abdominal prolegs. Newly hatched larvae have the same arched appearance as older larvae.

Damage: Looper larvae are aggressive feeders and usually feed along leaf margins. When scouting, one should check the undersides of leaves.

Economic Impact: Similar to beet armyworm, heavy infestations of loopers can cause significant defoliation and contribute to increases in production costs due to insecticide usage.

Other lepidopteron species, including cutworms and fall armyworms, can also be sporadic pests of sweet potato and should be managed similar to the species described here.

Management Options: When defoliation reaches 35 percent or higher, a labeled insecticide should be applied to manage insect populations. Management options for lepidopteron insect pests include: