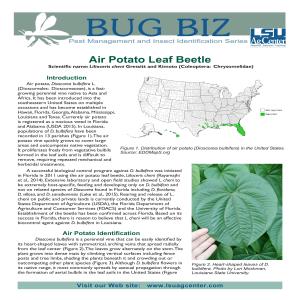 Air potato, Dioscorea bulbifera L. (Dioscoreales: Dioscoreaceae), is a fast-growing perennial vine native to Asia and Africa. It has been introduced into the southeastern United States on multiple occasions and has become established in Hawaii, Florida, Georgia, Alabama, Mississippi, Louisiana and Texas. Currently air potato is registered as a noxious weed in Florida and Alabama (USDA 2015). In Louisiana, populations of D. bulbifera have been recorded in 13 parishes. The air potato vine quickly grows to cover large areas and outcompetes native vegetation. It proliferates freely from vegetative bulbils formed in the leaf axils and is difficult to remove, requiring repeated mechanical and herbicidal treatments.

A successful biological control program against D. bulbifera was initiated in Florida in 2011 using the air potato leaf beetle, Lilioceris cheni (Rayamajhi et al., 2014). Extensive laboratory and open field studies showed L. cheni to be extremely host-specific, feeding and developing only on D. bulbifera and not on related species of Dioscorea found in Florida including D. floridana, D. villosa, and D. sansibarensis (Lake et al., 2015). Rearing and release of L. cheni on public and private lands is currently conducted by the United States Department of Agriculture (USDA), the Florida Department of Agriculture and Consumer Services (FDACS) and the University of Florida. Establishment of the beetle has been confirmed across Florida. Based on its success in Florida, there is reason to believe that L. cheni will be an effective biocontrol agent against D. bulbifera in Louisiana.

Dioscorea bulbifera is a perennial vine that can be easily identified by its heart-shaped leaves with symmetrical, arching veins that spread radially from the leaf center. The leaves grow alternately on the stem. The plant grows into dense mats by climbing vertical surfaces including fence posts and tree limbs, shading the plants beneath it and crowding out or outcompeting other plant species. Although D. bulbifera flowers in its native range, it most commonly spreads by asexual propagation through the formation of aerial bulbils in the leaf axils in the United States. These aerial bulbils form from late summer through fall, and drop to the ground when the plant dies back in late fall through winter. In southern Louisiana, the vines begin to senesce in mid- to late-October. In spring and summer, new plants grow from bulbils that have dropped to the ground the previous year. Unlike species of Dioscorea (such as D. alata) which are grown for their edible tubers, bulbils of D. bulbifera are bitter tasting.

Two other exotic Dioscorea species are known to be present in Louisiana, D. oppositifolia (=D. batatus) and D. alata (Thomas & Allen, 1999). A native species, Dioscorea villosa, is also present (Pemberton & Witkus, 2010). The invasive air potato may be distinguished from D. oppositifolia by the leaf shape, which in D. oppositifolia is constricted and arrow-like, compared to the wide, heart-shaped leaves of D. bulbifera. Dioscorea alata, or winged yam, has larger and more triangular leaves than air potato and its stem is square compared with the round stems of air potato. The leaves of D. alata are opposite, whereas the leaves of D. bulbifera are alternate. Leaves of Dioscorea villosa, or wild yam, may be narrower than those of D. bulbifera, and never form aerial bulbils (Langeland & Meisenburg, 2008, Overholt et al., 2008).

Lilioceris cheni is a native herbivore of D. bulbifera in Nepal, India, Laos, Thailand and China. Based on a survey conducted in 2015, L. cheni is present across Florida (W. A. Overholt, personal communication).

Eggs: Eggs are small, white and laid in loosely clustered groups on leaf undersides. Clusters may contain anywhere between 10 to 100 eggs. The eggs turn yellow as they complete development and larvae hatch after four days.

Larvae: First instars are yellow with a dark head capsule and dark legs. Their body may darken to a dull orange or red color as they grow. There are four larval instars. Larvae are often covered with a sticky secretion, and may commonly be seen with frass sticking to their bodies. Mature larvae often have a pronounced hump where the abdomen begins.

Pupae: Pupae are about 7mm long and are found in the soil. When ready to pupate, mature fourth instars migrate into the soil and form a cocoon made of salivary secretions and soil particles.

Adults: Adult beetles are about 9mm long. Their elytra are often shiny and bright red, but may also range from dull brown to orange. The head, thorax, abdomen and legs are black. The overall body shape is rectangular.

Adults lay eggs on leaf undersides in small, loosely packed clusters. Larvae hatch in four days and begin feeding on the leaf undersides. The larvae feed gregariously and quickly skeletonize leaves, preferring to feed on young, tender growth. Larvae and adults also will feed on aerial bulbils if they are present on the plant. When the larvae are mature they migrate to the soil and form a cocoon, where they remain for 12 to 16 days before emerging as adults (Center & Overholt, 2012). Adults typically mate and begin ovipositing 10 and 15 days after emergence, respectively. In the field, L. cheni has multiple overlapping generations and may be expected to go through four or five generations in the course of a growing season. Lililoceris cheni continues to feed as adults and have been observed to survive six months or longer. When the plant dies back in winter, adults bury themselves in leaf litter and remain inactive (diapause). Adults reemerge in spring when the plant resumes growth and females start laying the new generation of eggs. Lilioceris cheni currently has no known predators, parasites, or diseases in the United States.

The only host of L. cheni in the United States is D. bulbifera. Extensive host-specificity studies have shown that larvae cannot complete development on any related Dioscorea species or on any economically important cultivated plant species (Lake et al., 2015).

Feeding by L. cheni on D. bulbifera kills the growing tips of the vine and skeletonizes leaves. This prevents the plant from spreading and drastically reduces its photosynthetic area. Vines of D. bulbifera have significant nutrient stores in their underground tubers and can continue to produce new growth after the aboveground leaves are consumed. Feeding by L. cheni reduces the plant’s aboveground biomass and can lead to a decrease in reserves over time. In southern Florida release sites, significant damage to air potato infestations has been reported in as little as three months following release (Center & Overholt, 2008). Biological control of air potato using L. cheni has the potential to provide long-term suppression of air potato and a major reduction in the physical and chemical efforts required to remove infestations. Reduction of the above-ground growth of air potato will, over time, allow native plants to reestablish and increase the local species diversity in infested areas.

Thomas, R.D. and Allen, C.M. 1999. List of Introduced Plants of Louisiana. From Atlas of the Vascular Flora of Louisiana. Retrieved from http://www.wlf.louisiana.gov/sites/default/files/pdf/page_wildlife/6768-Rare%20Plant%20Species/List_of_LA_Exotic_Plants.pdf.