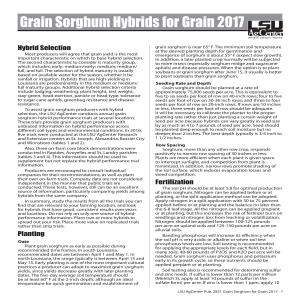 Most producers will agree that grain yield is the most important characteristic on which to base hybrid selection. The second characteristic to consider is maturity group, which includes: early; medium/early; medium; medium/full; and full. The selection of hybrid maturity is usually based on available water for the season, whether it be rainfall or irrigation. Hybrids that are high-yielding in Louisiana are predominantly in the medium or medium/full maturity groups. Additional hybrid selection criteria include lodging, weathering, plant height, test weight, stay-green, head exertion, panicle or head type, tolerance to sugar cane aphids, greenbug resistance and disease resistance.

Also, three on-farm core block demonstrations were conducted in Rapides, Avoyelles and St. Landry parishes (tables 3 and 4). This information should be used to supplement but not replace the hybrid performance trial information.

Producers are encouraged to consult individual companies for their recommendations, as well as plant their own on-farm trials. Company data are not considered independent in the manner that public trials are conducted. These tests, however, still can be an excellent source of information, particularly comparing yields among hybrids from the same company.

In summary, study the results from all the trials you can find that are relevant to your farming location, and look for hybrids that have good, consistent results over years and locations. Do not rely on only one source of hybrid-performance information. Plant two or more hybrids to spread out your risk. Place more value on replicated trials rather than strip trials.

Plant grain sorghum as early as possible during recommended time frames. In south Louisiana, recommended dates are between April 1 and May 1. In north Louisiana, the range typically is between April 15 and May 15. Early planting is one of the most important cultural practices a producer can adopt to maximize grain sorghum yields, since yields decrease greatly with later planting dates. The five-day average soil temperature should be at least 60° F at the 2-inch depth, although an ideal temperature for quick germination and establishment of grain sorghum is near 65° F. The minimum soil temperature at the desired planting depth for germination and emergence of sorghum is about 55° F (expect slow growth). In addition, a later planted crop normally will be subjected to more insect (especially sorghum midge and sugarcane aphids) and disease pressures. When the option is to plant soybeans or grain sorghum after June 15, it usually is better to plant soybeans than grain sorghum.

Sorghum, more than any other row crop, responds positively to narrow row spacing of 30 inches or less. Plants are more efficient when each plant is given space to intercept sunlight, and competition from plant is minimized. In addition, narrow rows promote shading of the soil surface, which reduces evaporation losses and weed competition.

The soil pH should be at least 5.8 for optimal production of grain sorghum. Nitrogen can be applied before or at planting, or the split application method can be adopted. Apply nitrogen in a split application with 50 to 75 percent applied before or at planting and the balance no later than the 6-8 leaf stage. All the nitrogen can be applied preplant or at planting, but this increases the risk of fertilizer burn on seedlings and nitrogen loss from leaching or volatilization. Nitrogen should be applied between 100-125 pounds per acre on upland soils and 125-150 pounds per acre on alluvial soils.

Banding phosphorus will increase its efficiency when the soil pH is very acidic or alkaline or when soil test phosphorus levels are low. Soil testing is recommended for applying the appropriate levels for each field, but in many soils, 40-60 pounds of P2O5 and K2O per acre will be needed. Grain sorghum uses phosphorus and potassium early in its growth cycle, so these nutrients should be applied preplant or at planting.

Soil testing also is recommended for determining sulfur and zinc needs. If sulfur is lower than 12 parts per million (Mehlich 3), apply at least 10 pounds of sulfur (in the sulfate form) per acre. If zinc is lower than 1 ppm, apply 10 pounds of zinc in a soluble form, such as zinc sulfate or zinc chelate, per acre. Among the inorganic zinc sources on the market, the most common sources are sulfates, oxides and oxysulfates. Zinc sulfate and zinc chelates essentially are 100 percent water soluble, while zinc oxides essentially are insoluble in a single crop season, thus unavailable to the crop to be planted. Oxysulfates are a mixture of sulfates and oxides, with varying proportions of sulfates and oxides and different solubility levels (0.7 to 98.3 percent). The effectiveness of these can be highly variable, depending on solubility. Low solubility materials may have some value in a long-term buildup program, but when immediate results are the goal, highly soluble fertilizers are the best choices. For acceptable in-season efficacy, a zinc-fertilizer source should be at least 50 percent water-soluble. If a soil test shows zinc is between 1 and 2.25 ppm, apply 5 pounds of zinc per acre when broadcasting. Less is needed if using a banded application.

Weeds compete with grain sorghum for light, nutrients and soil water, thus reducing yield and grain quality. In addition, they harbor insects and diseases that could potentially diminish yield and quality more. Furthermore, for each inch of soil moisture used by weeds (not to mention nitrogen) can be worth 5-7 bushels per acre of grain yield.

The most critical period for weed control is the first four weeks after planting. If weeds are controlled during this time, and control is maintained through the remainder of the season, little reduction in grain sorghum yield will occur. Yield reduction from weeds that emerge four weeks after planting is usually minimal. However, weed escapes can be a major interference with harvest. Herbicides commonly used for weed control in grain sorghum can be found in the 2016 Louisiana Suggested Chemical Weed Management Guide (Publication 1565). Do not forget, check herbicide labels for rates, application timing and other restrictions ‒ the reason being that herbicide labels are constantly updated.

Grain sorghum has a drought-tolerant reputation, which makes it a good choice under dryland or non-irrigated situations. A sorghum crop that receives 21 inches of usable water during the growing season will use 6-8 inches to produce the head, while the other 13-15 inches will produce approximately 100 bushel of grain per acre. Moisture stress early in the season will limit head size (number of seed per head) and delay maturity. If stress occurs later in the season, the seed size is greatly reduced. The number of heads are not affected by moisture stress unless it is so severe as to prevent head formation.

During the seedling stage, only a small amount of moisture in the soil surface is required to establish the crop. More moisture is lost during this stage through evaporation from the soil surface than through the crop canopy. Water conserving practices, such as residue management, timely planting for quick establishment, narrow row spacing and weed control will minimize soil moisture losses.

About 30-35 days after emergence, five to six true leaves are visible and the plant begins rapid growth. Nearly half of the total seasonal water will be used during this stage prior to heading.

The most critical period for water availability for sorghum begins about one week before head emergence or the “boot stage” and continues through two weeks past flowering (Figure 1). Sorghum plants require good soil moisture during this period for maximum yields. Adequate soil moisture prior to the “boot” stage will assure the highest potential seed set. The actual seed number and seed size depends on the availability of soil moisture following flowering. Moisture demands drops quickly after the grain has reached the “soft-dough” stage. This combined drop in moisture demand, natural drought tolerance and the extensive root system of sorghum generally make late irrigations unprofitable.

In Louisiana, grain sorghum producers may consider harvest aids, particularly glyphosate to manage sorghum dry down and harvest for several reasons. Currently, sodium chlorate and glyphosate are labeled for application in grain sorghum.

On a cautionary note, applying harvests aids to sorghum fields with stalk or charcoal rot can make fields especially prone to lodging if a harvest aid is used, and a prompt harvest does not occur.

Applications should not be made prior to black layer and when seed moisture is below 30 percent; otherwise, grain yields will be reduced. Furthermore, if a harvest aid is applied at black layer, be ready to harvest in the next 7-10 days.

As a rule of thumb, 17-20 kernels per square foot are equivalent to 1 bushel per acre. To aid in determining losses, 1 square foot frame may be constructed from heavy wire. It is recommended to take at least three ground counts at each location. Also, when making ground counts for kernels, look for lost head. One 10-inch head per 10-foot area is approximately 1 bushel per acre.

As a member of the grass family, sorghum has a panicle-type inflorescence and tillering characteristics that make it able to completely regenerate the above-ground portion of the plant. This characteristic allows producers to seek a second grain crop within the same growing season. Ratooning practices begin with shredding the sorghum stalks down. The decision to ratoon is made only after 5-6 inches of regrowth is observed, which is then followed by 40-60 pounds of nitrogen being applied. One can usually plan on the ratoon crop to yield from 1/4 to 1/3 of the main grain crop. Seldom does a great ratoon crop follow a poor main crop. Damage and feeding by birds is the most devastating potential problem to the ratoon crop. Blackbirds have deterred many producers from considering sorghum ratooning.