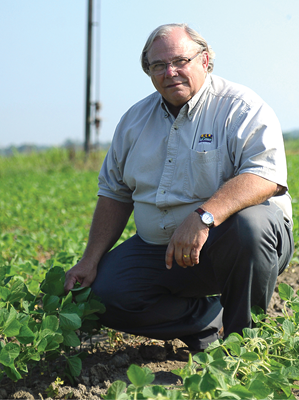 Jim Griffin, weed scientist, will retire in 2016 after more than three decades with the LSU AgCenter. Photo by Olivia McClure

About three decades ago, as fields in Louisiana choked on nearly uncontrollable weed populations, the 1981 state average soybean yield was a low 21 bushels per acre.

It’s a far cry from last year’s average of 57 bushels per acre – a milestone LSU AgCenter weed scientist Jim Griffin said is only partially due to modern high-yielding varieties.

“Soybeans have very high yield potential when they are watered properly, weeds are eliminated to reduce their competition with the crop, insects are controlled and diseases are managed,” said Griffin, who plans to retire in 2016.

He has helped farmers navigate that constantly evolving equation since August 1979, when he arrived at the Rice Research Station in Crowley “on the edge of a great shift,” he said. Farmers around Louisiana were growing more and more soybeans, and rice farmers in the southwest were just beginning to rotate them with their crop.

Eight years later, when he moved to LSU’s main campus to concentrate on weed management in Louisiana crops, the agricultural chemical industry was changing fast. Part of his job was to evaluate and determine application rates for new herbicides being released to control grass and broadleaf weeds.

Despite those advances, Griffin said, it was still common to see fields with heavy weed infestations.

In the mid-1990s, Monsanto rolled out Roundup Ready technology — soybean, cotton and corn resistant to glyphosate, the active ingredient in Roundup. Roundup Ready seeds were more expensive but enabled farmers to effectively control a host of weeds with a single affordable herbicide. Many eventually used glyphosate exclusively.

“With multiple applications being made in crops year after year, it was only a matter of time before Mother Nature would exert her influence,” Griffin said. “Weed populations in fields began to shift toward weeds less sensitive to glyphosate.”

“The Soybean and Grain Research and Promotion Board has been generous over the years in supporting weed management research in Louisiana,” Griffin said. “This has been important because of differences in weed complexes, soil types and crop rotations around the state.”

Farmers themselves revealed many of those intricacies. Taking time to talk with them, as well as to consultants and chemical company reps, about their concerns was often rewarded with a relationship and trust. They often call Griffin for his advice.

“You’re being called on to make major decisions on that crop — a decision that will cost those growers a lot of money,” Griffin said. “It is fulfilling to know that folks have that much confidence in your knowledge and experience.”

Conversations with growers have helped Griffin see things differently, he said. Some of their questions and suggestions led to innovative research projects for his graduate students.

Griffin has mentored 50 graduate students, teaches courses in weed science and field research methods, and is the College of Agriculture’s graduate student recruitment coordinator. Students, he said, have been both his biggest challenge and greatest reward.

“To see students come in with little self-confidence and a perceived inability to speak in front of a group, and then to graduate, overcome those issues and be very successful is extremely rewarding,” Griffin said. “The opportunity to conduct meaningful research and to work with clientele and students has truly been a blessing.”

“The weed management strategies that Jim Griffin and his students have developed for Louisiana’s soybean, feed grains and sugarcane industries are a primary reason these growers have been successful with profitable crop yields. Much of his basic work on weed ecology, crop tolerance and herbicide performance in Louisiana cropping systems formed the framework for strategies used across the Southern region of the U.S. His contributions to teaching, research and extension in weed science have been recognized not only in the state of Louisiana, but by his colleagues in national professional societies,” said Rogers Leonard, AgCenter associate vice president for plant and soil science programs.

Olivia McClure is a graduate assistant with LSU AgCenter Communications.