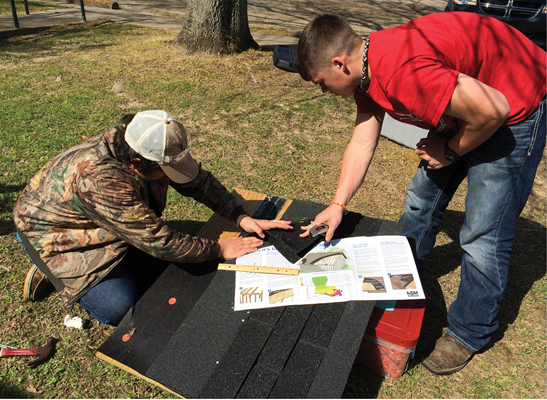 Clay Zaunbrecher, left, and Dre’ Boudreaux, both of Vermilion Parish, build a roof model. The activity was part of an innovative LSU AgCenter program to educate youth about disasters and teach them how to mitigate, or adapt, buildings so they have less damage during disasters. Photo by Debbie Hurlbert

4-H members from across the state are finding their voice in making their communities safer from disaster by participating in hazard mitigation projects aimed at strengthening public facilities.

The students have learned hazard mitigation is a way of adapting to the damaging forces caused by a natural disaster. From there they move on to determining the best adaptation strategies for protecting a structure.

The teams so far have identified improvements for governmental buildings in Vermilion and St. John the Baptist parishes to reduce the chances of storm damage. Projects in the works include improvements for the Grant Walker 4-H Educational Center in Pollock and in Jefferson Davis Parish.

The team in St. John the Baptist Parish has recommended improvements for a safe room for emergency workers responding to a disaster. The need for a safe room became evident with Hurricane Isaac in 2012. Emergency responders had to sleep in their cars and work in an overcrowded Office of Emergency Preparedness in LaPlace.

After conducting a risk assessment, the team’s list of items for planners to consider included a sloped roof for better drainage, sleeping quarters with showers, impact-resistant windows, reinforced doors and construction of the building shell with insulated concrete forms.

They presented their recommendations to parish officials on May 14, 2015. The team’s estimated the cost of the building at just over $200,000, but that does not include foundation pilings, interior walls or electrical and mechanical services.

Deborah Hurlbert, LSU AgCenter extension associate, said the project was a good challenge for the students. “They have exceeded what they felt they could do. I can’t say how proud I am of them.”

The 4-H’ers learned about sea level rise, and they conducted a vulnerability assessment of parish emergency facilities, she said.

She said the students, all ninth-graders, met with engineers overseeing construction of the East St. John the Baptist High School, repairing the school buildings that were flooded by Hurricane Isaac in 2012. “They brought stacks of blueprints and volumes of details.”

Shandy Heil, LSU AgCenter extension associate, said the students benefitted from the project in several ways. “They’re going to be better prepared for the future.”

The students are making a graphic novel to highlight what they have learned.

They appeared before the Vermilion Parish Police Jury in 2014 to recommend a series of improvements that included elevation of the air conditioning units at the extension office to prevent them from being ruined by flooding. In addition, they recommended stronger doors and windows.

At the Police Jury meeting, the students brought a roofing model that displays proper materials and techniques for building a hurricane-resistant shingled roof.

The Police Jury implemented the improvements and went one step further by installing a new wind-resistant roof.

The students produced a 10-minute video, “Somewhere Over the Bayou,” a spoof of the “Wizard of Oz,” that depicts a fictitious rural area hit by wind and heavy rain. The characters find ways to make their property less vulnerable to future disasters. The video went on to receive an award at a national 4-H competition and can be seen on YouTube.

A statewide team made up of 4-H Club members from nine parishes has been evaluating what can be done at 4-H Camp Grant Walker to make it less vulnerable to severe weather. The team met at Camp Grant Walker in February and conducted a vulnerability assessment of camp structures. They wrote a report identifying structures needing additional protection from natural hazards, including a counselor cabin located near Big Creek, and the amphitheater known as the Greek Theater.

In May, the team met in Baton Rouge to work on an official hazard mitigation grant application for the camp facilities. Civil engineering and hydrology experts guided the students in development of a plan to prevent flooding of the camp structures during heavy rain events.

They will present a plan to the LSU AgCenter administration in October.

Ty Zaunbrecher’s involvement in mitigation projects contributed to his selection as one of 15 youths chosen for the national FEMA Youth Preparedness Council for 2015-16. The council supports FEMA’s commitment to involving youth in preparedness-related activities, and it provides an avenue to engage youth by taking into account their perspectives, feedback and opinions.

Bruce Schultz is a writer and photographer with LSU AgCenter Communications.

(This article was published in the summer 2015 issue of Louisiana Agriculture.)