Investigating the Potential for Drone Use in Agriculture 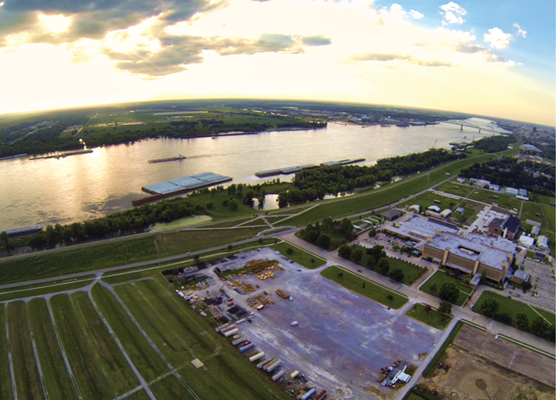 The Mississippi River in Baton Rouge at sunset. The photo was taken with a camera-equipped drone. Photo by Charles Malveaux. 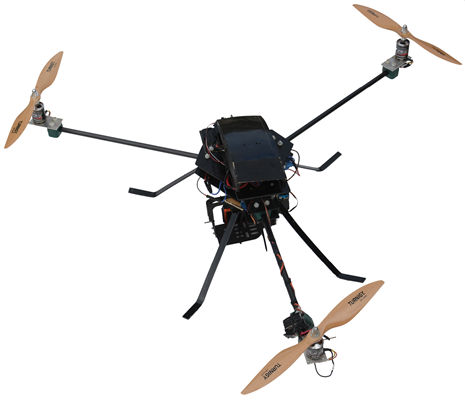 This is one of the drones built by Charles Malveaux, research associate in the Department of Biological and Agricultural Engineering. Photo by John Wozniak

The aerial drone is a unique remote sensing platform that allows real-time collection of remote sensing data. LSU AgCenter researchers are exploring uses of these unmanned aerial vehicles in agriculture. One of the first projects involves flying a drone equipped with a sensor device to measure the vegetative index of a crop. The device measures the green growth of a plant, giving a possible indication if additional fertilizer is needed on specific areas of a field. Research into accurate application of agricultural chemicals and fertilizers can save costs and reduce farm runoff, which will help preserve and protect the environment. The drone is capable of carrying a modified Trimble GreenSeeker NDVI sensor as well as a modified Canon camera configured to take wide-angle near-infrared photographs. For this research project, sensors were carried by drone aircraft and employed to remotely analyze the effects of aerial applications of farm chemicals on farm fields over multi-acre plots.

NDVI is the acronym for Normalized Difference Vegetative Index. The Trimble GreenSeeker is a sensor that uses a laser scanning system and analyzer to generate NDVI reflectance values for crops passing underneath. NDVI data can also be generated through near-infrared photography, such as that provided by the drone’s modified Canon camera. By using software called Image J, the data generated can be converted into numerical values that can then be plotted as a calculated NDVI value.

Using this technique, calculated NDVI data derived from infrared imagery using the drone’s modified Canon nearinfrared camera was compared to computed NDVI numbers created by a Trimble GreenSeeker. In addition, Landsat 8 satellite data were also compared to the high resolution imagery of the drone’s near-infrared camera to gauge the sufficiency of its resolution for this application.

The automated stability controls and guidance systems these drones carry can result in increased efficiency when compared to manned systems, while also providing enhanced safety factors to operators as well as reduction of human error. The drones constructed are robust aerial platforms that have the ability to be rapidly configured in the field and put to work on multiple remote sensing missions.

Safety was a factor in the design of the drone used in this research project. The drone was designed to absorb force and strategically break apart rather than injure bystanders or property while also being able to carry a working payload in excess of 6.5 pounds at a speed in excess of 40 miles per hour.

Methodology
Geo-referenced shape files of fields were created by a hand-held GPS survey of the area to be studied by the drone. These shape files were then integrated into ArcGIS software to geo-reference the imagery taken for this project. Field area coordinates were used to program the drone flight routes. The drones flew a programmed pattern over the selected fields, and more than 150 high definition images were taken at various altitudes over two areas in Donaldsonville and St. Gabriel containing mature as well as juvenile sugarcane crops. Observations were made to determine if the effects of different treatments could be discerned through remote sensing image analysis.

The mature sugarcane crop areas flown over had received chemical applications intended to rapidly ripen them, causing them to store the maximum amount of sucrose in their stalks. The drone gathered data used to gauge the effectiveness of the various herbicides and chemicals used to ripen these crops. In the near future these data can give farmers a better understanding of the amount of chemicals needed to treat crops.

Results and Discussion
Near-infrared cameras and Trimble GreenSeekers are different sensor systems, but in comparison they still produced parallel reflectance curves while showing substantial positive covariance. In comparison with the GreenSeeker, this study shows that an inexpensive near-infrared camera carried by drone aircraft on autonomous missions can effectively be used for crop analysis. The comparable data that the camera generated combined with the camera’s greater scan area at higher altitudes in excess of 300 feet versus the GreenS eeker’s limited scan area at less than 5 feet above crops make the near infrared camera system more suitable for rapid field surveys. Based upon analysis results between the two sensor systems, it was determined that the Canon near-infrared camera was more suitable for this project and as a standalone imaging method for future research.

Data analysis showed visible differences in crops along with the overlap between treatments. The satellite images in Figures 1 and 2 show the Donaldsonville farm area being studied. Discoloration in the near infrared-image of Figure 3 shows areas where the crop has been affected by chemical treatments. In addition, overlap areas between different treatments can be observed in this image. In Figure 5 the field was treated uniformly with a single chemical application, and this is apparent when the image was analyzed using Image J software.

Conclusion
The drone’s ability to safely and quickly survey farmland and assist in precision control over chemical and fertilizer application rates can greatly increase farm industry profitability. Farmers, environmentalists and regulatory agencies can use drones for real-time analysis of farm areas, coastal areas and various other land areas to study a wide range of data points from tracking crop treatments to cataloging regional and coastal topography as part of preservation efforts. Agricultural survey drones can monitor land use and take air samples to help researchers gather valuable data, which can be used for various precision agriculture applications.

For this project the results exceeded the expectations for the GreenSeeker in that its laser light emitter is somewhat underpowered and its range is limited to a maximum of less than 5 feet above the crops being analyzed compared with the near-infrared camera’s ability to scan large areas at a height in excess of 300 feet above crops. The near-infrared camera was able to take data from a much higher vantage point, which means it could analyze an entire field with a single high-resolution, near-infrared photo. Sensors similar to the GreenSeeker with extended range exist for use with manned aircraft; however, these large NDVI sensors are too heavy for use on the small drones.

The resolution of Land Sat 8 satellite data more than 30 yards is not comparable to the resolution of the drone imagery. Lightweight drones like the ones employed in this research can be conveniently launched and can easily provide high resolution regardless of cloud cover or time schedule, unlike satellites. Satellite data still has its place in that satellites can gather cohesive data from entire agricultural regions; however, this research shows that drones can greatly augment environmental and agricultural remote sensing capabilities. The National Agricultural Imaging Program (NAIP) has yearly aerial imagery data available at a resolu tion of about 1 yard. But while its resolution is sufficient, its once-a-year availability is not adequate for the weekly surveys of land areas for agricultural and coastal land management purposes. This research shows that lightweight aerial drones can regularly monitor agricultural regions as part of a systematic farmland management and control system.

Aerial drone systems have a many uses. Robotic drone aircraft can be the foundation of an advanced remote-sensing- based agricultural control system, which can revolutionize the industry. In addition, these autonomous systems can also be used as part of environmental and coastal preservation efforts.

Charles Malveaux is a research associate in the Department of Biological and Agricultural Engineering.