Effectiveness of a Saltwater Bath in Purging Crawfish 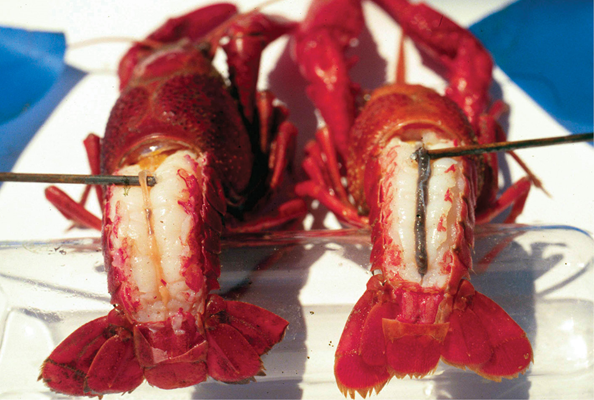 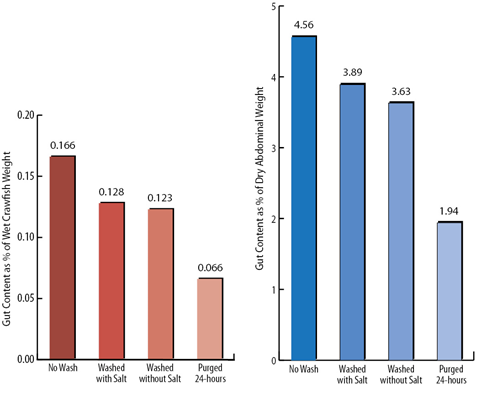 Figure 4. Dry hindgut content of crawfish from each of the four treatments expressed as a percentage of whole wet crawfish weight and dry abdominal weight. 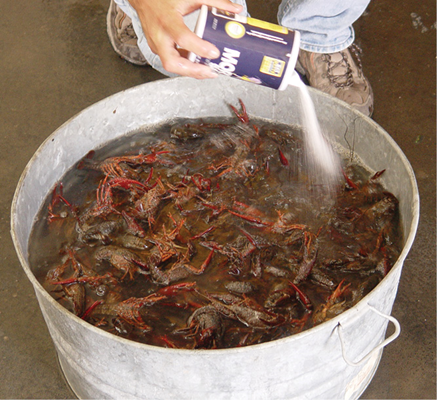 Figure 2. There is no evidence that suggests the use of salt in cleansing crawfish is beneficial. (Photo by W. Ray McClain) 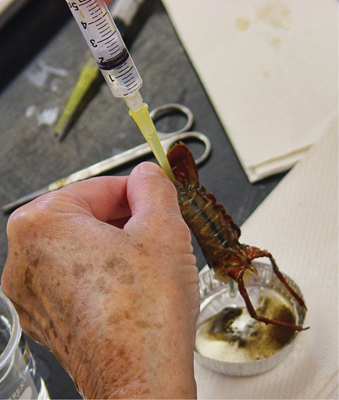 Crawfish have been consumed in the southern United States for centuries, first by Native Americans, who later introduced the European settlers to this bountiful food resource. Immigrants who settled near the waterways and swamps of Louisiana found a ready supply, and soon crawfish became an object of commerce, dating back to at least the late 1800s. As demand increased, particularly in the larger cities, and because the wild supply varied considerably from year to year, farmers began experimenting with methods to ensure a more consistent supply. Rice farmers of the early 1900s noticed that populations of crawfish naturally inhabited their fields during the flooded stage of production. Therefore, they began to experiment with harvesting techniques and water management practices to capitalize on the increased demand for crawfish. By the late 1960s and early 1970s, crawfish aquaculture as we know it today was well underway. Today, Louisiana farmers produce almost 100 million pounds annually, worth approximately $150 million. Another $5 to $20 million is generated from the wild crawfish fishery.

Most of the crawfish are sold live for consumption with less than 20 percent processed and packaged. As in other parts of the world where crawfish (or crayfish) have been enjoyed for centuries, crawfish consumption is generally associated with social occasions. In the southern United States, crawfish are typically boiled with spicy seasonings and served hot, usually with a mixture of accompanying vegetables. In the spring, coinciding with peak production months, home consumption of crawfish often occurs in outdoor venues. Dedicated cooking rigs are used, often large enough to accommodate a 30- to 40-pound sack of crawfish – the typical means of transport. Cooks will often empty the entire sack of crawfish into the pot, perhaps after a cursory wash. Others will first empty the sack of live crawfish into a tub of water for a more thorough wash. Many households will routinely add one to two pounds of salt in the wash water with the intent of “purging” the digestive tract before cooking. This practice is based largely on hearsay or tradition, often passed down from generations.

Though seldom employed, commercial depuration, or purging, confines freshly harvested crawfish in water for one or two days without food prior to further sales. This process is effective at reducing the volume of material in the hindgut – that portion of the gastrointestinal tract exposed upon removing the exoskeleton from the abdomen (Figure 1). Yet, the practice of commercial depuration is not widely used in the high volume crawfish industry in Louisiana because of time and cost.

The efficacy of a short-term saltwater bath in reducing the contents of the gastrointestinal tract has not been thoroughly tested. Still, people continue to employ it, and advocates continue to recommend it. The internet is replete with instructions for using a saltwater bath to purge crawfish, often with reference to increased mortality when soaking crawfish too long in the hypersaline solution.

Therefore, this study was designed to obtain more definitive data regarding the effectiveness of the common saltwater bath in cleansing the hindgut of digesta. Freshly harvested red swamp crawfish were subjected to four treatments that simulated different preparation methods for cooking: (1) no washing (controls), (2) crawfish washed in a saltwater bath, (3) crawfish washed in fresh water without the addition of salt, and (4) crawfish subjected to a commercial purging process for 24 hours.

On each of three occasions during the spring of 2013, about 30 pounds of crawfish harvested that day were placed in a tub containing 10 gallons of fresh water and allowed to soak for 10 minutes. A similar portion of crawfish was placed in a second tub containing 10 gallons of water and 1.6 pounds of noniodized table salt and allowed to soak for 10 minutes (Figure 2). A third portion of the day’s harvest consisted of nonwashed individuals. The fourth group consisted of crawfish harvested the previous day and purged for 24 hours in an aerated vat without access to feed. A subset of crawfish from each treatment on each test date was randomly collected for determination of hindgut content weight. The remaining crawfish from each wash treatment were sacked and immediately placed in humid refrigerated storage at 42-46 degrees Fahrenheit for assessment of mortality after 72 hours, a second objective of the study.

Results
Immersing farm-raised crawfish in a water bath prior to cooking, even for as little as 10 minutes, aids in removing mud and debris from the exterior of the animal as evident from the immediate increase in turbidity of the wash water. As crawfish rub against each other in a crowded water bath, it loosens material from the exoskeleton. The results of this study also suggest that a water bath may aid in lessening the amount of content contained in the hindgut by a small percentage.

The amount of hindgut content in crawfish was greatest among the nonwashed specimens. Regardless of whether gut contents were expressed as a percentage of whole wet crawfish weight (0.07 percent) or as dry abdominal weight (1.9 percent), the relative hindgut content weight of fully purged crawfish was significantly lower, approximately 60 percent less than that of crawfish not washed (Figure 4). The 10-minute water baths, with or without salt, resulted in from 17 percent to 26 percent less gut content weight than nonwashed specimens. Salt provided no significant advantage in this study despite the numerous claims that continue to be made to the contrary.

To address the question posed by some regarding the effect of salt in a water bath on crawfish mortality, death was assessed immediately after the bath and then again after 72 hours under refrigerated storage. Less than 1 percent of dead crawfish were observed immediately after the water bath, and these may have been simply due to handling. While mortality was typically low after 72 hours of refrigerated storage, more deaths were observed in association with the saltwater bath (6.2 percent) than the freshwater bath (1.9 percent). This effect may be a moot point because in nearly all cases, crawfish are cleaned shortly before cooking only. The home consumer will likely not store live crawfish after cleaning, and the retail or restaurant trade, which typically receives live crawfish chilled, will likely keep the animals in a chilled condition until cleaning immediately prior to cooking.

In conclusion, preparing crawfish for cooking by immersion in a water bath, with or without salt, for a short time will often provide some degree of cleansing, although this is mainly associated with exterior surfaces and the gill cavity where debris can accumulate. The amount of digesta in cooked crawfish subjected to an adequate wash may not be discernible from nonwashed crawfish; however, washing will lessen the amount of debris shed during the cooking process. There is no evidence from this study that suggests the use of salt in cleansing crawfish was beneficial, but results do indicate that a saltwater bath may contribute to increased mortality, if washed crawfish are subjected to refrigerated storage for several days prior to cooking. Conventional commercialstyle purging for 12 hours or longer is the only known way to significantly reduce the size of the hindgut in cooked crawfish, and that method is usually not practical for consumers.