Do cattle know what to eat and when to eat it?

Adjacent pastures of annual ryegrass (left) and clover mix (right) after the end of the grazing season in June 2011. Calves had the chance to walk from one side to the other and grazed with no restrictions. Note the clovers were still green while annual ryegrass was already gone. (Photo by Guillermo Scaglia) 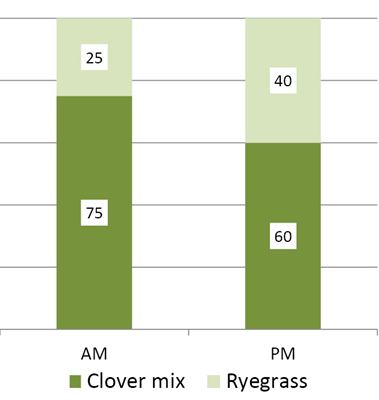 Figure 1. Average percent of the time throughout the grazing season that heifers spent grazing annual ryegrass or clover mixin adjacent pastures during the morning and afternoon hours.

Figure 2. Percent of the time throughout the day as an average for the season ( ) and for the last 30 days of the grazing season ( ) that heifers spent grazing on the clover mix in adjacent pastures.

Figure 3. Average (3 years) botanical composition of clover (A) and mixedryegrass and clover (B) pastures throughout the grazing season.

Humans have different tastes in salad. Some people prefer just lettuce and a little oil as ingredients; others prefer to add cucumber, tomato, spinach, onion, avocado and black olive, and then add olive oil or a salad dressing. Some prefer all these ingredients but placed separately on the plate. Cattle approach their feed in a similar way. They don’t like single ingredients; they would rather have a mixed or complex diet.

If ruminants have access to different forage species, they always choose a mixed diet, although they will show partial preference for certain forages. The question is, If they require only one of those forages to meet their nutrient requirements, why do they pick a “mixed salad”? Some of these cattle behaviors when grazing different forages have been studied by scientists with the aim of understanding the underlying mechanisms of animal-plant relationships and with the objective of increasing the efficiency and profitability of animal farming.

Preference is not the same as selection. Selection can be defined as the preference of the animal modified by physical constraints to access at least some of the components offered. A pasture where a grass and a legume are planted together causes the animal to search for the preferred ingredient of the diet, in this case, the legume. The barrier is the grass, so cattle express selection for what they want. Selection is demonstrated by a ruminant grazing a pasture composed of a mix of, for example, white clover (a legume) and ryegrass (a grass). In normal conditions, either of the two plants would meet the dietary requirement of the animal; however, in this type of pasture, the white clover commonly comprises 10 to 20 percent of the total available dry matter of the forage. It has been proven that cattle have partial preference for legumes. They would search for the white clover from within the ryegrass to obtain the “balanced” diet they prefer. Consequently, a typical diet is composed of 50 percent or more clover (or other legume) of the total forage dry matter consumed.

The next question is, Will this response change if we add a mix of legumes? To answer it, crossbred beef heifer calves with an average body weight at the beginning of the grazing period of 525 pounds were offered different grazing options: annual ryegrass only; a clover mix only of white, red and berseem clovers; a mixed pasture of annual ryegrass and the same clover mix; and adjacent areas of equal size of annual ryegrass or the clover mix. To study calves’ grazing behavior, one heifer per group was fitted with a cattle pedometer. Video cameras were used to study the cattle during the day.

There was also a clear disparity between the average time on clover mix throughout the grazing period and that for the last 30 days (Figure 2). In the latter, the time spent grazing on clover mix was less than 50 percent during the major afternoon grazing period (after 3 o’clock in the afternoon), probably associated with the lower water-soluble carbohydrate concentrations of the clover mix, but also because of the changes in botanical composition (Figures 3A and 3B). From day 75 of grazing until the end of the grazing period, the proportion of berseem clover decreased significantly, drastically reducing the amount of forage available. Red and white clover started to increase their contribution to the dry matter produced (Figure 3A) at that point, but it was not abundant.

Calves grazing different pasture configurations (mixed or adjacent) gained the same amount of body weight, but their grazing behavior was affected. Animals grazing adjacent pastures were offered the opportunity to select their diet at the time of the day they wanted, which gave them the chance to walk less than those grazing other pasture types where calves needed to spend time searching for the missing component of their diet (grass or legume). Differences in the concentration of water-soluble carbohydrates between grass and legumes may explain the different proportion of time that calves spent grazing on adjacent pastures of annual ryegrass or clover mix; however, during the last 30 days of the grazing season, the reduction in the proportion of berseem clover also influenced the proportion of time that calves grazed on annual ryegrass or clover mix.

Guillermo Scaglia is an associate professor at the Iberia Research Station, Jeanerette, La.