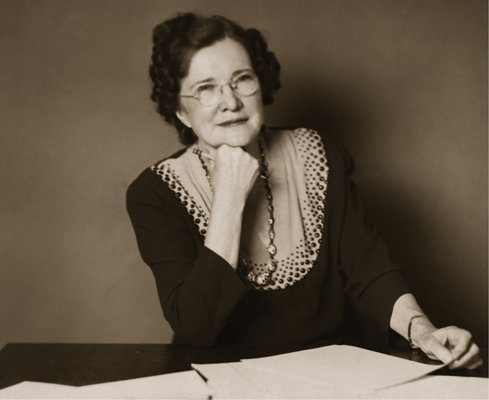 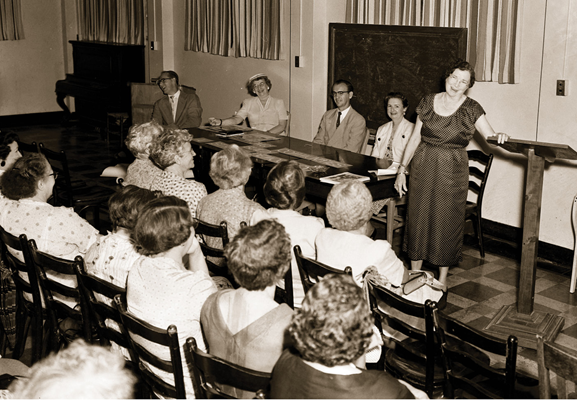 Mary Mims was an extension agent in the 1920s through the 1940s. She started community and leadership development programs, and her teachings served as a model for the rest of the nation. LSU AgCenter photo archive

LSU has recruited students and athletes who have eventually become famous, but few know about Mary Mims – a pioneering woman recruited by LSU Agricultural Extension in 1925 – who would become one of the world’s foremost community organizers. She was the leader of an innovative community organization movement in Louisiana that would change the state and serve as a model for the country in the 1920s, 1930s and 1940s.

Mims started her career as a teacher in Bienville Parish and would later become the state’s first female principal before becoming parish superintendent of education.

Influential Bienville Parish leaders had voted down a special tax to build a much-needed school. Mims, who had led the effort to raise the money, was frustrated at the outcome and ready to quit teaching. According to her memoirs, she fought back the idea, saying to herself: “Mary Mims, turn the search light within and find your failure.”

As an alternate plan, she started a lecture course, asking the leading tax opponents – a farmer, doctor, blacksmith and dentist – to participate by sharing their personal stories of success with students. The prominent rural leaders were flattered by the invitation and won over by the experience. On the next attempt, the tax passed, and the school was built.

“One senses the lack of any lift or pull by cooperative momentum,” Mims had said about unmotivated agricultural towns, villages and hamlets. “One sees the struggling church, the divided community, the poor school, the ineffective local organization.”

Mims viewed communities as the “seedbeds of democracy… the hope of the world…a vital part of the mighty machine we call government.”

She immediately started a rigorous itinerary – travelling regularly to parishes across the state. Her task was to use extension principles to develop and spread a program promoting the “economic, intellectual, civic, health and recreational life of the community.”

Mims also travelled to Denmark to study that nation’s successful plan of community work. Denmark had the lowest levels of illiteracy, poverty and crime of any country in the world at the time. Mims learned how to develop what the Danish called “folk schools” and brought the concept back to America. These informal gatherings encouraged culture, civility, character and principles of good citizenship. The events included group songs, literacy exercises and recreational activities for all ages. “Folk schools” became part of Mims’ overall program and were set up in many parishes.

In 1925, her first year of extension work, Mims helped revitalize 42 communities with her innovative programs. By the time Mims retired in 1952, she had spearheaded the establishment of nearly 1,000 new and improved communities – places like Calhoun in Ouachita Parish, Hico in Lincoln Parish, Evergreen in Avoyelles Parish, Hungarian Colony (now called Hungarian Settlement) in Livingston Parish and Cypress Knee in Lafayette Parish.

One highly symbolic location for Mims’ community revitalization work was Iowa in Calcasieu Parish. This area was first established by agricultural innovator Seaman A. Knapp, considered by some as the father of agricultural extension work. Here, Knapp had encouraged Midwestern farmers to migrate south and use their wheat implements to attempt growing rice; hence, the Louisiana community’s borrowed name from the Midwestern state.

Knapp had already died by the time Mims reached Iowa, La. Had they met, the two pioneers might have talked about similar visions of improving the lives of rural families. One common priority they shared was youth development.

Knapp had begun the idea of boys corn clubs and girls tomato and canning clubs, which would collectively sprout into 4-H. But Mims’ work helped some children at an even earlier age. She initiated the establishment of a health clinic for babies, employing the services of two volunteer doctors.

Mims observed that in rural areas with no community programs, “bored youngsters gather on the streets at dark, hungering for excitement.”

“Every community should have good wholesome recreation programs…and remember, recreation was not intended to wreck life, but to recreate life,” she said. “There is no environment more vital to the life of the youth of the state than the community in which they live.”

“I beg of you,” Mims said in a speech to young adults, “to go back to your communities, study their needs and do something about them.”

Her book, The Awakening Community, which was published in 1932, launched her to national and international fame. The work, which features anecdotes, practical wisdom and concrete suggestions for building strong communities, became a model for community development for other states.

Mims was featured as a premier speaker at events in 48 states and was considered one of the greatest national orators of her day. She gave a speech alongside President Calvin Coolidge, travelled to personal conferences with national leaders and nobility in Europe and other parts of the world, and became one of the best known national advocates for community development.

Her objectives are being realized today as extension agents work with local and statewide organizations to combine their ideas and resources to establish parks, playgrounds, fitness trails, health fairs, technological literacy campaigns and other tools for improving the health and happiness of rural residents, while bringing them closer together.

Mary Mims was the original community organizer in Louisiana and one of the greatest innovators on the subject in America. Her inspirational and pioneering accomplishments had a profound influence on rural welfare and awakening slumbering local communities.

“As a good citizen, everyone should be interested in the health and beauty of their community,” Mims said. “Community work can save the country.”

(This article was published in the spring 2014 issue of Louisiana Agriculture.)