The two poultry houses at the Hill Farm Research Station in Homer are solid-wall houses and measure 42 feet by 500 feet. The houses are equipped with tunnel type ventilation and have 6-foot-by-85-foot cool cells. Photos by William E. Owens 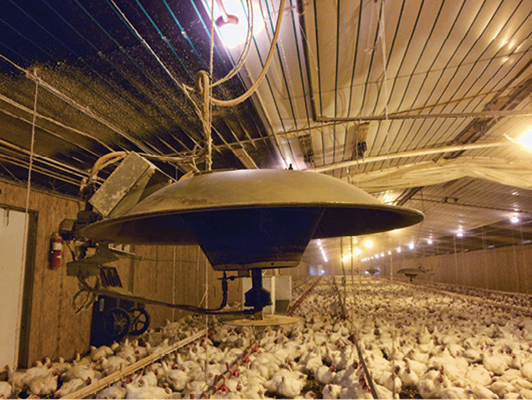 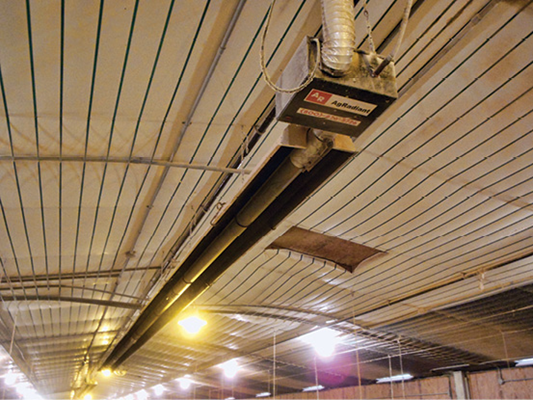 Seven tube heaters were used in the tube-heated house.

The poultry industry generates $1.6 billion per year for the Louisiana economy and is the largest animal commodity in the state. The majority of the industry in Louisiana is located in the north central parishes of Bienville, Claiborne, Jackson, Lincoln, Ouachita, Union, Webster and Winn. Other major poultry producing parishes include Natchitoches, Sabine and Vernon.

The Hill Farm Research Station in Claiborne Parish is ideally located to provide the poultry industry with information about management practices, equipment alternatives and innovations that can improve poultry producers’ profitability. Through a cooperative agreement with poultry industry leaders, LSU AgCenter poultry researchers, poultry producers, members of the Louisiana Farm Bureau, and the Louisiana Department of Agriculture and Forestry, demonstration poultry houses were constructed at the Hill Farm beginning in 2005. Members of these organizations formed a poultry house steering committee to recommend demonstrations to be conducted in these houses. A variety of donors provided funding for the houses, and the poultry industry provided the equipment.

The poultry houses at the Hill Farm are designed to provide the poultry growers of Louisiana evaluations of the latest innovations in equipment and management techniques for raising broilers under commercial conditions.

The two buildings are solid-wall houses measuring 42 feet by 500 feet. They are equipped with tunnel-type ventilation and have 6-foot-by-85-foot cool cells, which are used for additional cooling from moisture being drawn into the house by fans. The computer control center allows state-of-the-art management and control of house conditions, such as air flow, humidity and temperature.

Brooder heaters consist of burners below canopies that direct heat downward toward chickens below. Tube heat is relatively new to the poultry industry.

Tube heaters are propane or natural gas-fired heaters that are hung near the ceiling of the chicken house. These heaters consist of a firebox connected to a metal tube, usually 40 to 50 feet long, running lengthwise in the house. The research program evaluated their effectiveness and identified possible fuel savings.

This study compared propane use and bird performance between the two houses for two years, during which eight flocks of broilers were produced. Bird performance was measured by livability, weight gain and feed conversion – the ratio of feed consumed to weight gained. All parameters were the same for the two houses except for the type of heater. House of Raeford contracted with Hill Farm to provide birds for the houses, and flocks were raised under commercial conditions to approximate typical grower use of equipment.

Seven tube heaters were installed in one house, and 18 brooder heaters were used in the other. Propane use was measured by separate meters for each house.

Results
Comparisons of propane use and bird production values are shown in Table 1. Tube heaters used an average of 9.86 percent less propane than conventional brooder heaters over the two-year comparison. Bird performance measured by livability, average weight and feed conversion was the same for both houses. Over the two-year study, the house with tube heaters used 630 gallons less propane for a savings of approximately $1,280 with propane at $2.03 per gallon.

The initial cost of tube heaters is higher than brooder heaters. Using commercial prices, tube heaters cost approximately $3,600 more per house. Using the information from this twoyear comparison, it would take four to five years to recoup the additional cost. However, this estimate depends on weather (more propane is used in cold years) and propane cost.

Conclusions
Tube heaters were more economical to use but more expensive initially. The higher initial cost can be recouped by the savings in propane use. Savings will be more pronounced in colder years and in more northern locations. No differences were noted in maintenance cost. Both sets of heaters were new at the beginning of the study, and no mechanical issues were noted for either type in the two years of use.

New Study Planned
With the completion of the heater comparison, the steering committee has decided to evaluate a new proprietary bedding product. The product is a pelletized blend of recycled newsprint and recycled corrugated cardboard treated before pelletizing with a proprietary chemical. When applied to cellulose, the chemical is purported to allow cellulose fibers to absorb urea and phosphorus up to 50 percent or more of their initial weight.

The study has three objectives. One is to compare the effect of a proprietary cellulose bedding product with conventional wood shavings in two broiler houses on moisture, ammonia, phosphate and nitrogen levels and on bird performance and footpad health. The second objective is to compare the two types of bedding for bacterial pathogens present, including Salmonella species, Enterococcus species, Escherichia coli and Campylobacter species. The final objective is to compare darkling beetle adult and larvae numbers in the two types of bedding.

William E. Owens is a professor and Corinne Ray is a research associate at the Hill Farm Research Station in Homer. Owens is also the research coordinator at the station.