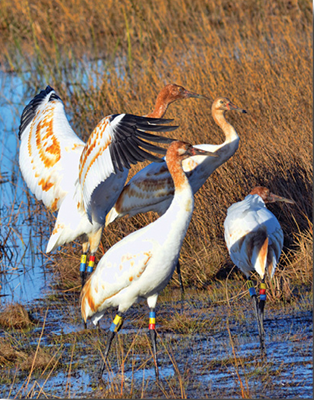 A group of four juvenile whooping cranes huddle closely in the marsh at the White Lake compound. Photo by Johnny Saichuk 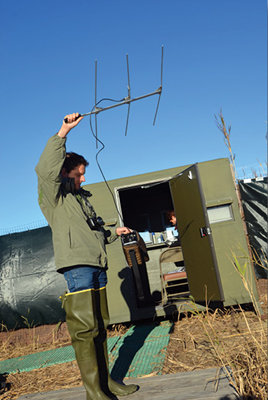 Vladimir Dinets, LSU AgCenter wildlife researcher, holds up an electronic tracking device antenna to determine the location of whooping cranes at White Lake. Tandi Perkins, another LSU AgCenter wildlife researcher, inside an observation blind, completes notes made on the birds' activities at a compound where the birds are fed when they are brought from a nursery in Maryland. Photo by Bruce Schultz 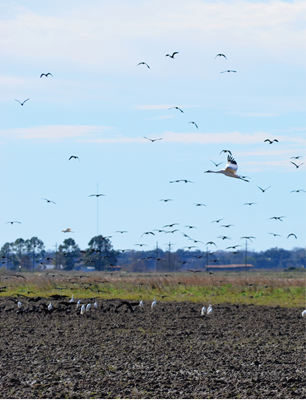 A lone whooping crane flies among herons and ibises over a rice field in Vermilion Parish. The bird was one of 40 juvenile birds brought to White Lake to re-establish a resident flock. Photo by Bruce Schultz

LSU AgCenter wildlife researchers Tandi Perkins, at left, and Vladimir Dinets make notes on their observations of young whooping cranes. Perkins and Dinets use a blind to watch each bird for five minutes, and the birds’ activities and movements are recorded in a logbook. Photo by Bruce Schultz 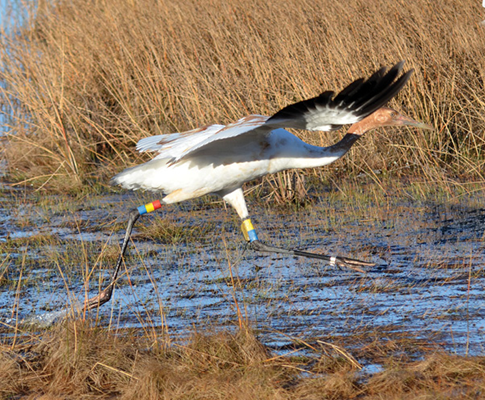 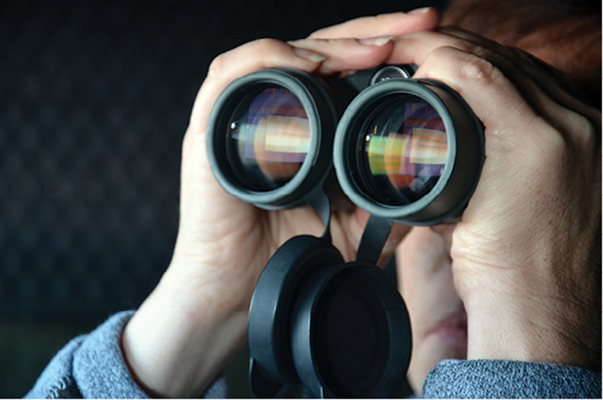 Tandi Perkins, LSU AgCenter researcher, peers through binoculars at a group of whooping cranes at White Lake in Vermilion Parish where the birds were once commonly found. Photo by Bruce Schultz

Until the early 1900s, whooping cranes were a fairly common sight in southwestern Louisiana. “At one time, Louisiana had more whooping cranes than anywhere in North America,” said Sammy King, of the U.S. Geological Survey Louisiana Cooperative Fish and Wildlife Research Unit at the LSU AgCenter.

Edward McIlhenny, an ornithologist and businessman from the family that started the Tabasco Co., in his 1943 book “Bird Life of Southern Louisiana,” wrote about the disappearance of several species of birds in the coastal region, including the whoopers.

McIlhenny wrote, “Before the settling of the prairies bordering the coast of Louisiana and while these prairies were used only as cattle ranges, the whooping crane (locally known as grue blanche) was one of our most picturesque winter residents. Quite large flocks of them were in evidence all winter to anyone riding over the open ranges. Due to their natural shyness, they were not often killed, except by hunters who stalked them by walking alongside a horse or steer. As the flesh of the whooping crane was highly prized for food, its large size caused it to be killed in preference to ducks or the smaller geese. The whooping crane now is practically extinct in Louisiana and occurs only as a straggler.”

Now, more than 60 years later, a project monitored by LSU AgCenter researchers aims to restore a population of the big birds in the Louisiana coastal region.

The LSU AgCenter has contracted with the Louisiana Department of Wildlife and Fisheries to conduct the research for the project. “They are providing us with support funding for the monitoring,” King said. “It’s a very close-knit team.”

The project is funded with a combination of public and private grants, including one from the International Crane Foundation. Another partner in the project is the U.S. Fish and Wildlife Service.

“We hope it will continue until we can get breeding pairs to have a self-sustaining population,” King said. “The project will be evaluated after three years and will likely continue for at least 15 years.”

As late as the early 1900s, a migratory flock wintered every year in Louisiana, and a resident flock stayed in the White Lake area in Vermilion Parish, King said.

In the early 1900s, the populations fell dramatically as the huge birds, which can stand 5 feet tall with 8-foot wingspans, were easy targets for shooters. At the same time, whooping cranes and their eggs were being collected for museums, and the breeding wetlands in the Midwest were rapidly being drained.

A major hurricane led to the end of the resident Louisiana flock, King said. The last bird at White Lake was captured in 1950 and brought to Aransas Pass, Texas, the wintering area for the last surviving flock in North America.

“At one time, they were down to 14 birds at Aransas,” King said. Since 2010, three groups of young birds have been relocated at White Lake Wetland Conservation Area, a state-owned reserve managed by the state Department of Wildlife and Fisheries.

In November 2012, 14 new birds were brought to the compound at White Lake. Like the two previous groups, they were raised at the U.S. Geological Survey Patuxent Research Facility in Maryland until they were six months old.

When they were moved to Louisiana, they were placed in a release pen in the marsh at White Lake, where they were allowed to become acclimated to the Louisiana environment for several weeks. The birds were protected from predators by an electric fence around the pen.

To prevent the young birds from becoming imprinted to humans, the birds’ caretakers wore white suits and masks to imitate adult cranes.

“The entire time they are at the pen, they do not see a human out of costume,” said Tandi Perkins, AgCenter wildlife researcher.

Their diet consisted of chicken feed, which was stopped in January. It’s usually at that point that the birds start venturing away from the compound, Perkins said.

While the birds were in the pen, Perkins and the other workers wore white suits with masks to prevent the birds from becoming accustomed to the sight of humans.

Perkins, along with AgCenter researcher Vladimir Dinets and Department of Wildlife and Fisheries colleague Sara Zimorski, uses an enclosed blind to observe the birds and takes copious notes of their movements and activities.

Transmitters are placed on the birds’ legs to track their movements. “We know exactly where all of our birds are because of satellite data,” Perkins said.

Some birds have flown away, never to be seen again either because of mortality or transmitter failure. Some have gone to Texas, and others have ventured to Arkansas, but later returned. “Last year, we had birds at White Lake until July,” Perkins said.

Before the new birds arrived, there were 14 whooping cranes in Louisiana from two previous groups. Of the first 10 birds brought to White Lake in February 2011, only two are still alive. A dozen of the 16 birds from the second cohort brought in November 2011 have survived.

Of the birds that didn’t survive, some were taken by predators. Two were shot in October 2011 by two juveniles in a pickup truck.

Seven of the veteran birds have been staying at a location near Bunkie since July, Perkins said, and they apparently were comfortable enough during hunting season to remain there.

Perkins regularly monitors the birds’ whereabouts, and several days each month, she goes into the field to locate them and observe their behavior.

Each bird is observed for five minutes. Anything the subject does – peck at the ground, look up at a passing bird or fly away – that action is data to be recorded.

Perkins and her fellow researchers on the project want to know if there is a higher survival rate among birds that appear alert, wary and more skittish. She is excited that this study could be the first of its kind.

“It’s an open field to understand the biology and the ecology of the birds, their behavior and where they go.”

Perkins said the birds often stay in rice and crawfish fields, and farmers have been cooperative and eager to learn about the project.

“They have just been super to work with,” she said. “They have been very supportive and accommodating.”

Rice and soybean farmer Christian Richard said three of the birds stayed on his farm for about three months. They didn’t interfere with his rice farm operations, he said, although they attracted flocks of birdwatchers.

“They were really big, big birds. It was neat to see them,” Richard recalled. “Then one day they just took off.”

Perkins said the birds have not been classified as endangered, which would affect how property owners manage their land where the birds are found.

Efforts are also under way to establish a migratory flock that nests in Wisconsin and spends the winters in Florida, using an ultralight aircraft to teach them the route.

An attempt to establish a resident flock in Florida failed because of a severe drought and heavy predation from bobcats. King said the Florida habitat was not as good as the White Lake area. In addition, nearby rice and crawfish fields are ideal for the birds.

“There are few places in the world that can compare to Louisiana’s rice fields in terms of water bird diversity, particularly being so easily viewable,” King said.

Bruce Schultz is a writer and photographer in Communications.