No Child Left Behind in Louisiana: The Financial and Organizational Implications 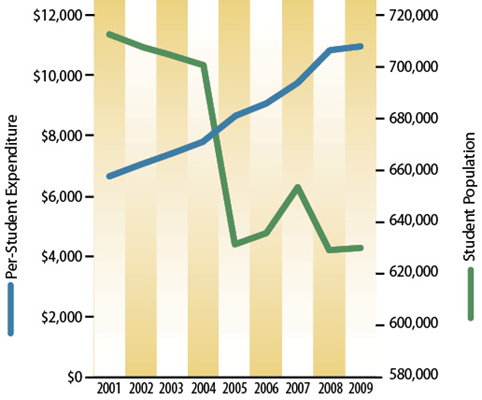 Figure 1. Louisiana per student expenditures since enactment of the No Child Left Behind law. Data from the Louisiana Department of Education annual financial and statistical reports. 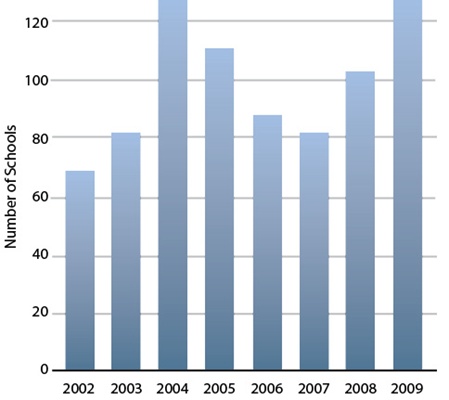 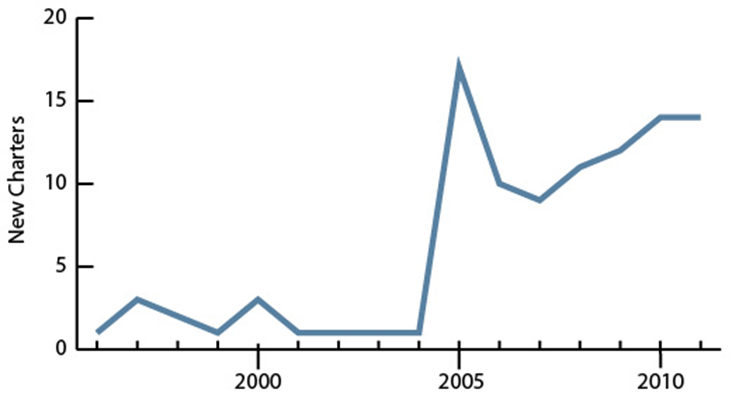 The No Child Left Behind Act of 2001 (NCLB) changed the way schools and state and district education offices organized and carried out their tasks. This paper describes some of these changes, paying special attention to addressing funding changes to meet requirements of NCLB and whether NCLB contributed to bureaucratic expansion and organizational restructuring.

No Child Left Behind
NCLB was put into place in 2002. It strived to improve student outcomes by instituting rigorous academic standards that every child in America would receive an adequate education, especially those children who have been historically disadvantaged. Over the past 10 years, NCLB has resulted in increased educational spending and extensive organizational restructuring.

Financial Restructuring
NCLB affected both administrative and adequacy costs. Administrative costs refer to testing implementation, accountability systems, highly qualified teacher systems and progress monitoring. Adequacy costs refer to the money spent on additional programs, including tutoring, summer school and supplementary services, as well as restructuring costs such as reducing student-teacher ratios. Most scholars agree that NCLB increased the expenditures for both administrative and adequacy costs. Debate continues over who should pay for these additional costs – states or the federal government. Federal politicians typically claim that NCLB is fully funded because the federal education budget was increased to fund NCLB, but states and local school districts often claim the federal increase was insufficient.

Louisiana already had an accountability system that included many of the NCLB elements in 2001; therefore, program costs were not very high at the outset. However, once it became clear that more than 75 percent of Louisiana’s schools would be classified as needing improvement, the program costs began to increase dramatically. More specifically, Louisiana spent most of its money trying to bring the lowest 5 percent of students up to proficiency through lower teacher-student ratios, tutoring and summer school.

Spending has also shifted. Budgets for subjects that are not tested, such as art, music and physical education, have been cut so that schools can focus on improving student test scores. Because Louisiana’s commitment to school accountability predated NCLB, it is difficult to distinguish whether costs associated with NCLB would have happened anyway under Louisiana’s accountability program.

Organizational Restructuring
Under NCLB, the administrative responsibilities of state departments of education expanded. States were responsible for identifying schools needing improvement and developing plans (jointly with local school districts) to turn these schools around or shut them down. Plans for turning failing schools around in Louisiana involved allowing failing schools to reopen as a charter school or turn over operations to the state or a private company. As Figure 2 suggests, the sheer numbers of failing schools (with an average of about 100 schools per year failing to meet adequate progress from 2002 to 2009) resulted in both an expansion of charter schools and an increase in state control of schools.

Charter schools are operated by a private nonprofit or for-profit organization under a five-year contract or “charter” that is overseen by the Board of Elementary and Secondary Education. In order to keep the charter, schools must participate in the state accountability program and meet achievement results. Charter schools are far more popular than state takeovers because they are intended to empower local communities to loosen bureaucratic regulations by allowing schools to be innovative in hiring, budgeting and instruction. Charters existed beforehand, but under NCLB they have proliferated across the United States; Louisiana is no exception.

Figure 3 shows the growth of charter schools in Louisiana from 1996 to 2010. In 2004, New Orleans became the first majority-charter schools city in the United States.

Louisiana’s Recovery School District is a new organizational entity created to deal with clusters of failing schools in the state, with a strong emphasis on New Orleans. It was created in 2002 to oversee academically unacceptable schools that have been removed from the jurisdiction of the local school board. Its jurisdiction was expanded during the period where New Orleans and Louisiana were recovering from hurricanes Katrina and Rita in 2005-2006, so many more public schools in New Orleans qualified to be controlled by the new district.

Nelson Smith, an education policy consultant, claims that the Recovery School District in New Orleans led to significant educational gains, including a 63 percent reduction in the number of schools classified as “academically unacceptable” and a graduation rate increase of 19.5 percent from 2009 to 2010. The RSD was initially given five years to accomplish its mission; however, the goal was extended in 2010 so that schools that show strong results for two consecutive years can now choose to remain in the RSD or return to a local governing authority.

More Change to Come
Some NCLB-motivated changes will soon fade away, while other state-led initiatives will further change the structure of the Louisiana education system. First, Louisiana was granted an exemption by the U.S. Department of Education from the swiftly approaching 2014 NCLB goals. The waiver allows funding flexibilities. For example, districts will no longer be required to spend as much on supplemental education services or professional development programs as outlined in NCLB. In addition, districts will no longer be required to submit federal reports such as the School Improvement Plan or Highly Qualified Teacher Target Improvement Plan.

In 2012, Gov. Bobby Jindal proposed a vast overhaul of Louisiana’s education system, promising additional financial and organizational change. First, teachers will now be compensated and “tenured” on basis of effectiveness rather than years of service. This new system has the potential to create additional costs related to the hiring and retaining of highly qualified teachers and related to organizational restructuring aimed at supporting efforts to switch from the old, seniority-based to the new, merit-based tenure system. Second, the Jindal plan works to restructure the charter application process, creates new types of charter schools, provides vouchers for low-income students to attend private schools, creates greater course choice and allows students to vote failing schools into the Recovery School District. All these aspects of the new system have potential significant implications for the way schools are financed and organized. And that is partially the point of the new law – to force real changes.

Conclusion
NCLB had the admirable goal of improving the education system and leveling the playing field for students. It also forced substantial financial and administrative restructuring. Louisiana was unable to reach the goals of NCLB and many schools deemed “in need of improvement” remain in the public school system, resulting in more expenditure and further restructuring. As new legislation becomes effective, the education system will continue to change as the academic goals, measurement of progress, and reporting systems are once again altered.